Shootout: Hyundai Elite i20 vs Hyundai i20 Active

The Hyundai i20 has always been a very successful product in the Indian market. The Korean auto giant first introduced us to this vehicle way back in 2009 when it was one of the first premium hatchback offerings in our market. The i20 has won the hearts of many Indians and rightly so. It comes across as a complete package offering a combination of space, features and performance, all of this at a relatively reasonable price (when compared to competition). The automaker then launched the Elite i20 in 2014 and it is a massive improvement over the previous generation of the vehicle. The Elite i20 too became successful and then Hyundai launched the i20 Active, which is a crossover version of the former. So, we do a quick comparo of both the vehicles and find out the differences between the siblings.

Motor Quest: The concept of premium hatchbacks was still at a nascent stage in India, when the Hyundai i20 was first introduced. The Maruti Swift was the only hot-selling large hatchback while the Honda Jazz wasn’t much of a success story. However, Hyundai hit the right spot and made sure that the i20 became a success story. The second generation model followed last year with the Elite badging while the Active was launched earlier this year. 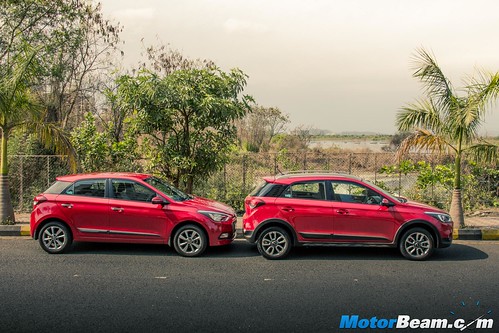 The differences in exteriors are not vast, yet quite evident with the Active being macho

Styling – The Elite i20 looks very premium and has a classy appeal to it. We must admit that it actually looks like a European car in many ways. The front honeycomb grille, the striking headlights, the amazing tail lights, the blackened C-pillar are all styling elements that give the premium hatchback a very nice appeal. The Elite i20 is quite a looker and the design philosophy is a thorough hit with the fairer sex. Certain colours like white, red and grey look absolutely gorgeous on the vehicle. The i20 also has good road presence and invites a few glances from passers-by. 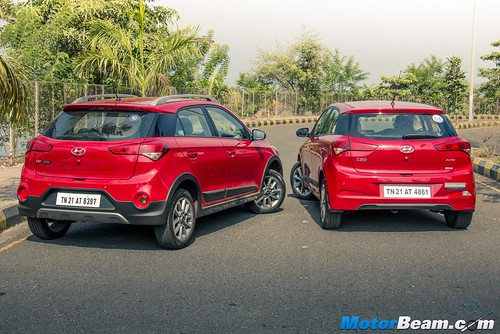 The i20 Active on the other hand comes with a rugged feel to it. Both the front and rear bumpers carry a new design and the front and sides also get silver skid plates. The air dam is also inverted. The rear bumper gets circular lamps at the bottom – one for the reverse light and one for the rear fog lamp. The headlights on the i20 Active come with projectors and LED DRLs along with cornering lights, unlike the halogens on the Elite i20. The fog lamps on the Active are also a size bigger than the Elite. Roof rails and new alloys are some of the other changes that the Active carries. The i20 Active gets a glossy black C-pillar while the Elite i20 gets a matte black finish. 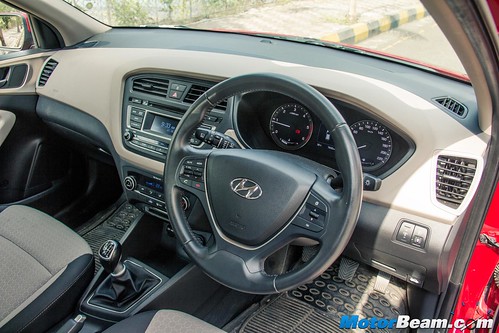 Interiors – The interiors of the i20 are very nicely laid out. The dashboard looks good and the centre console is also positioned ergonomically. The Elite i20 comes with a dual tone dashboard having a combination of black and beige. The vehicle is also loaded with a lot of features. The MID in the instrument cluster displays a whole lot of information and the i20 seriously feels loaded than even cars that are available in a segment above. The steering wheel is good to hold and offers tilt and telescopic adjustment. The AC cools fine but the blower speed could be a notch better. Rear AC vents are a boon. The 2-DIN audio system has 1 GB storage space and offers USB, Bluetooth, AUX and CD connectivity. The combination of 4 speakers plus 4 tweeters sounds very good. 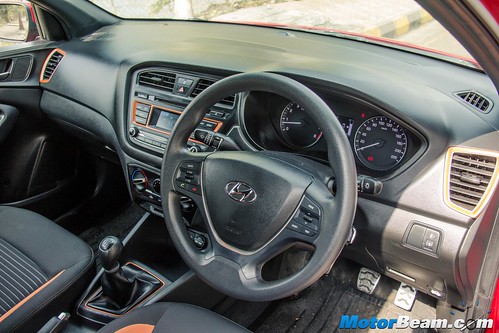 The i20 Active also gets a similar interior layout. The most important change is the colour scheme of the dashboard. Silver and white exterior colours come with Aqua Blue interiors and this colour theme really looks garish. The overdose of blue on the dashboard and other interior trims isn’t very appealing. However, other colours on the Active come with a subtle orange theme. Here, the dashboard gets a full-black treatment and only small trims and surrounds get the orange colour. This interior combo looks the best to us, out of all three. The i20 Active also gets silver finish pedals which add a sporty touch. Everything else is the same between both the models. 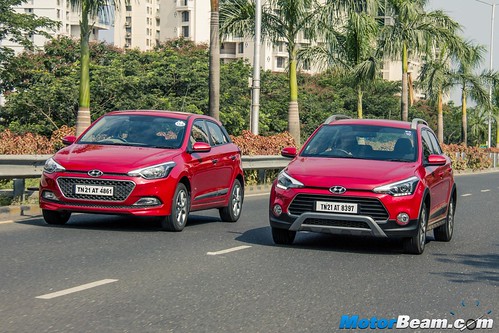 Same petrol and diesel engines are offered on both the cars, i20 Active gets minor tweaks

Performance – Both the cars come with the same engines. The petrol engine is a 1.2-litre dual VTVT Kappa unit doling out 83 PS of power at 6000 RPM and 115 Nm of torque at 4000 RPM, mated to a 5-speed manual transmission. The engine feels very refined and it doesn’t produce much noise either. It chugs the i20 very smoothly across various RPMs and it has enough punch for city driving. If you want to extract maximum performance, then the engine needs to be pushed all the way to the redline. The same engine has been tuned for better responsiveness in the i20 Active. Low-end performance has been improved on the crossover by 6%. The i20 Elite has a mileage of 18.24 km/l while the Active gives out 17.19 km/l, as tested by ARAI for the petrol variants. The lower weight and better aerodynamics help the Elite be more frugal than the Active. 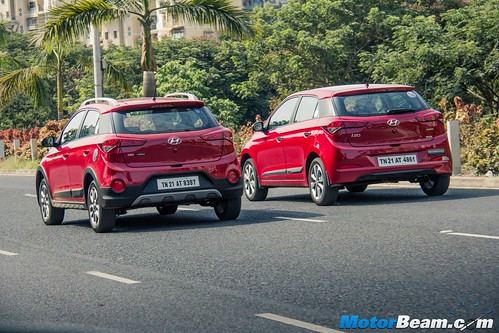 Out of the two engine options, our pick would be the oil-burner on both cars

Both engines offer nice grunt for city & highway usage, they are frugal

The diesel engine is also the same on both the cars. The 1.4-litre U2 oil-burner belts out 90 PS of power at 4000 RPM and 220 Nm of torque between 1500-2750 RPM and it comes with a 6-speed manual gearbox. The engine has been tuned to provide better driveability at the low-end of the rev range. This engine is also impressively refined and the clatter isn’t loud. Turbo lag can’t be felt much and once the tachometer touches the 1800 RPM mark, you can feel a slight surge of the turbo kicking in and it pulls the vehicle smoothly up to 3000 RPM. The same engine provides 11% better low-end performance on the i20 Active. ARAI tested fuel efficiency figures are 22.54 km/l and 21.29 km/l for the diesel Elite i20 and i20 Active respectively. 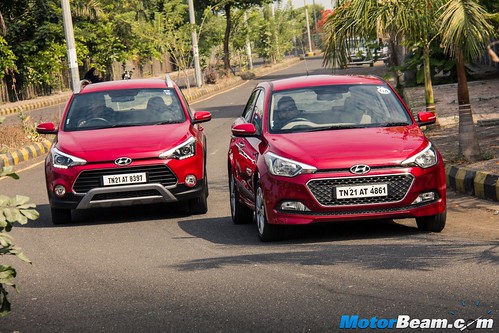 The i20 Active offers slightly better handling with its stiffer suspension

Driving Dynamics – Hyundai was always known to have sub-par dynamics in its vehicles. However, the company started taking feedback from customers and started improving things. The Elite i20 has amazing ride quality over various types of road surfaces and it glides over potholes with ease. Same is the case with the i20 Active, which too has very good ride quality and thanks to its higher ground clearance, it can tackle slightly uneven road surfaces without losing a breath. The Elite i20 has a ground clearance of 170 mm while the Active comes with a clearance of 190 mm. However, Hyundai has increased the height of the coil springs in the crossover and stiffened the suspension to negate the effects of the higher ground clearance. 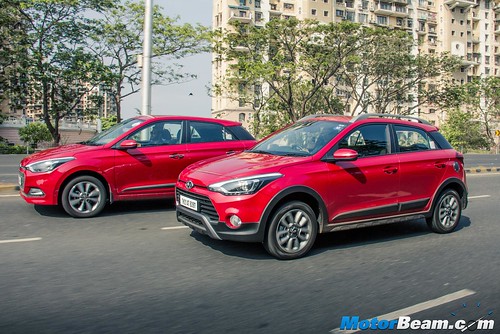 Ride quality is supple; brakes have a sharp bite and NVH levels are low

This means that both of them have very similar levels of ride and handling. The steering is light enough for city usage and at high speeds it is now much more confidence inspiring than the previous model. The i20, however, is a neutral handler and not as sharp as the Volkswagen Polo. The Elite i20 comes with 195/55/R16 Goodyear tyres which offer decent grip while the 195/65/R16 Apollo Alnacs on the i20 Active are far better in terms of grip. Braking is very good on both the cars and the bite is sharp while the pedal also offers good feel. 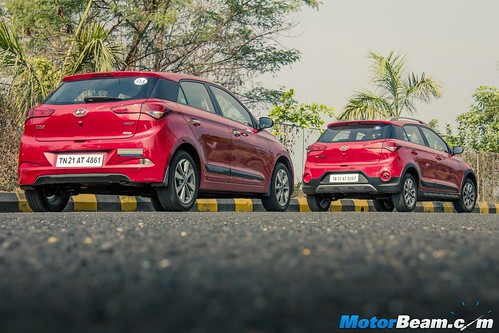 Hyundai no longer offers six airbags on the i20, not even on the more expensive Active

Safety and After Sales Service – The Elite i20 gets dual front airbags only on the Asta variant while the Sportz and Sportz (O) variants get a driver-side airbag. ABS is also offered only on the Sportz, Sportz (O) and Asta variants. The i20 Active also comes with ABS and dual front airbags as standard only on the top SX variant while the mid S variant gets a driver side airbag and ABS. Hyundai has a very good after-sales network in India and the company is increasing the number of service centres with time. 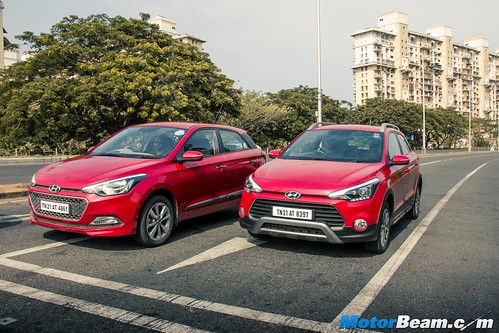 Similar products with different approaches, these i20 models have a vast appeal

Verdict – It is very difficult to choose a winner out of these two. Both the cars are similar and yet so different. Both the Elite i20 and Active i20 excel in styling, comfort, features and after-sales. If you are looking for a nice premium hatchback that is loaded to the gills, but want something that looks simple and classy, then the Elite i20 should be your pick. However, if you fancy something that looks catchy and sporty, and if you prefer the interior colour schemes that the crossover offers, then the i20 Active should be your choice. However, the Active is also significantly pricier than the Elite and it costs as much as a C-segment sedan. Hence, we feel that the Elite i20 is a better package but if you can afford it, the i20 Active is the one to opt for.

Hyundai has a good understanding of the Indian automotive market and knows how to hit the nail right at the target. The company always loads its cars with a huge equipment list while also pricing them competitively. It also evident that the automaker takes feedback seriously, considering the fact that they have worked hard to improve the dynamics in their cars. Between the Elite and Active, you can’t go wrong with either cars but if you have the budget, the Active is the i20 to buy.

“Similar cars with no drastic differences to change things. The bigger dilemma is usually if one should opt for the top trim of the Elite i20 or a lower trim of the i20 Active as they come at a similar price. If I had to choose, I would pick the Elite i20 as the features on the top-end trim makes this premium hatchback feel every inch premium. But given the budget, I would opt for the i20 Active as our roads aren’t getting any better.” – Faisal Khan, Editor, MotorBeam.
“When you talk hatchback or crossover segment where the Elite i20 and i20 Active are positioned respectively, you realise both cars are leaders in their space. That’s because they come across as the best package. With Honda having priced the Jazz at a bigger premium than expected, the person willing to splurge on the Japanese car will now think of buying the i20 Active instead which has definitely more equipment, I would do the same.” – Javeid Khan, Deputy Editor, MotorBeam.