The Grand i10 NIOS is an attractive, fuel-efficient and feature-loaded hatchback offering good space and comfort

With the automotive industry in India facing a slowdown, manufacturers are a bit tensed with their product plans. Certain companies have changed their market strategies, certain companies have paused new product launches and certain companies are going all out with their new products. Hyundai is one such company which has been launching new vehicles. The stint started off with the Venue which was launched in May, continued with the Kona which was launched in July and now the Korean automaker has brought in the third generation of the i10, named the Grand i10 NIOS.

Motor Quest: The Hyundai i10 started its journey in the Indian market in 2007 when it was launched as an upgrade to the Santro. The i10 became quite successful and the automaker gave it a mid-life facelift in 2010. Post that, the Grand i10 was launched and it was sold alongside the regular i10 for a while before the latter got discontinued. The Grand i10 NIOS has now arrived to compete in a tough segment. 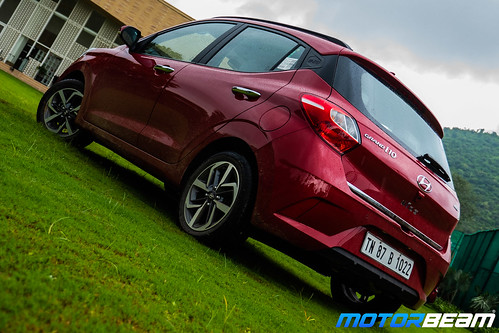 The i10 NIOS looks striking and contemporary

Exteriors – The styling of the Hyundai Grand i10 is pleasing to the eyes and it is targeted towards the younger generation. It is offered with some attractive colours and there are two dual-tone shades on offer too. The NIOS gets projector headlamps and a regular foglamp setup while LED DRLs are placed on the edges of the grille. The profile isn’t very loud and you get diamond cut alloys. The rear looks nice too, but certain elements like the tail lights remind of certain other cars. There’s a NIOS badge right at the centre of the boot lid and just below that is the rearview camera.

2014 Hyundai i10 Continues Its Routine Test Around Lonavala