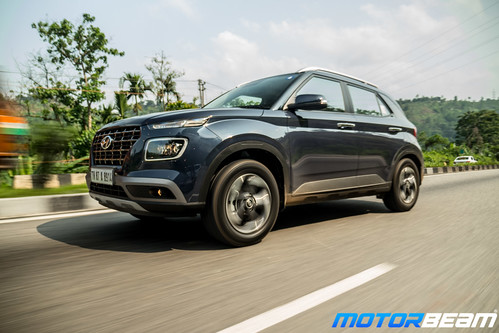 The new petrol engine suffers from turbo-lag lower down

Performance – The Hyundai Venue is offered with a choice of 3 engines. The 1.2-litre, 4-cyl Kappa petrol and 1.4-litre U2 CRDI diesel engines are shared with the i20. However, the buzz here is all about the new 1.0-litre, 3-cyl, GDI turbocharged petrol engine. Hyundai’s all-new turbo petrol engine is offered with a 6-speed MT or a 7-speed DCT which has been developed in-house by the automaker. It produces 120 PS at 6000 RPM and 172 Nm from 1500-4000 RPM. The new petrol engine has good NVH levels while on the move but at idle, you do feel some vibrations filtering inside the cabin. 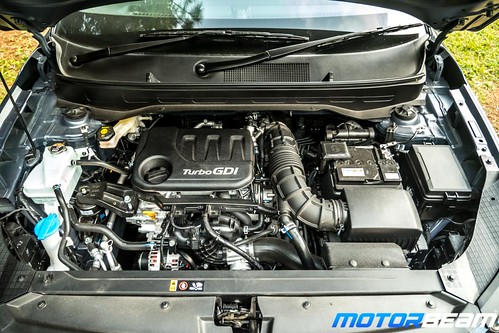 The new turbo petrol engine is a 3-cylinder unit

Once you get going, the first thing you notice is the considerable amount of turbo lag. Yes, there is lag lower down and once the turbo starts spooling, the motor dishes out power in a very linear and controlled manner. Power delivery goes on all the way to 6000 RPM and it is seamless throughout. However, you do not get the push-in-the-seat feel when you floor the throttle. Once you start climbing revs, the engine gets vocal but it sounds very nice near the redline. The engine has a claimed fuel efficiency of 18.27 km/l but out in the real world, you can expect something in the range of 11-14 km/l. 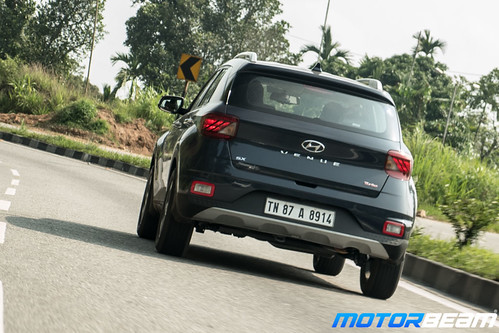 The petrol automatic has a smooth gearbox with a tiptronic mode

We drove the DCT variant and have mostly good things to say. First up, the gearbox is very smooth and gear shifts are jerk-free. It responds well to throttle inputs but when you mash the throttle, it doesn’t tend to downshift on its own, in fact, it keeps building speeds in the same gear. There’s no S mode on offer and neither do you get paddle-shifters but you do get a tiptronic mode. If you’ve selected a cog and go hard on the throttle, the gearbox upshifts at the redline on its own. The turbo GDI engine and the DCT offer a good combo minus the turbo lag. 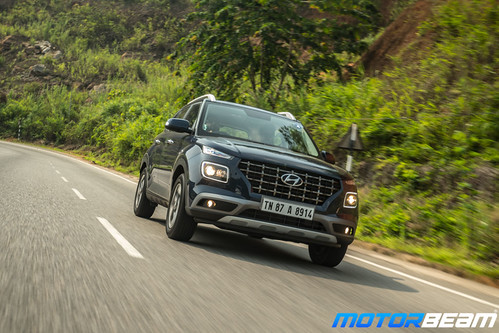 More communication from the steering would have been appreciated

Driving Dynamics – The Hyundai Venue’s steering feels very light at city speeds and that makes the car very easy and convenient to drive. At high speeds, the steering weighs up nicely but some more communicative feedback would have been better. The vehicle turns in nicely and holds its line well but of course, there is some amount of body roll on hard cornering. 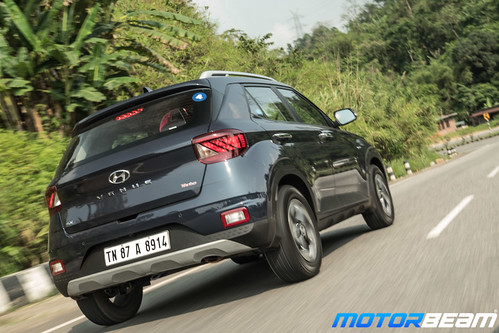 The ride quality at low speeds is very comfy

The suspension has been well engineered to tackle our roads and it takes on potholes and bad patches easily. Ride quality is indeed very good, however, it feels a bit on the stiffer side at high speeds and there is a fair amount of vertical movement of the passengers. The ride and handling balance of the Hyundai Venue is nice and will suit most customers well. The brakes also offer excellent stopping power with a sharp bite.

Hyundai Venue To Get BlueLink Connectivity