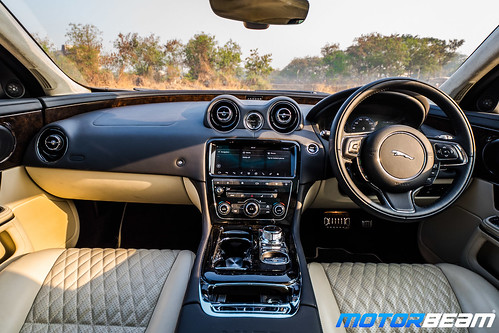 Interiors – The interiors of the Jaguar XJ50 spell luxury in bold capital letters. Like other British automobiles, this cabin goes the extra mile in both visual appeal and detail. Wood, leather and metal adorn the right places creating that typical charm which one associates with the craftsmanship-obsessed world of English motorcars. The richly metallic AC vents look beautiful and as does the metallic lid for the centre armrest and the controls to adjust the seats. The dashboard design is welcoming and that ‘Riva Loop’ trim that runs between the front doors gives the cabin a wrap-around effect. You also have the signature rotary gear selector that comes up as you start the car. Then there are the details that are unique to the 50 edition car like the small plaque on the dashboard cowl which tells the name of the car along with where it is made. The XJ50 badging is also seen on the door sills and on the front centre armrest where it is embossed in a large font. 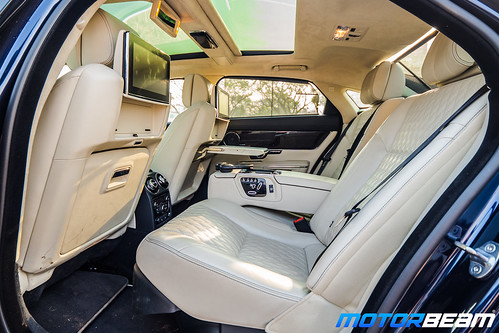 The rear seats get heating, cooling as well as massage functions and screens

The seats are thrones, to say the least. Big and supremely comforting, the quilted Ivory leather is a feast to your eyes. You sit slightly low in the XJ but there are a dozen ways to adjust your driving position meaning you can be at ease, always. The front seats can be adjusted in 18 different ways and come with memory function. They are also heated, cooled and can even massage you. The steering is chunky to hold and we love the crisp, clear and information loaded instrument cluster. The centre console occupies a large 10-inch touchscreen infotainment system that comes with Jaguar’s InControl App support. The display is sharp and the touch response good but for sheer usability, we’d still pick BMW’s excellent iDrive over the Jaguar. That said the 825-watt Meridian sound system delivers concert hall like surround sound in the cabin. 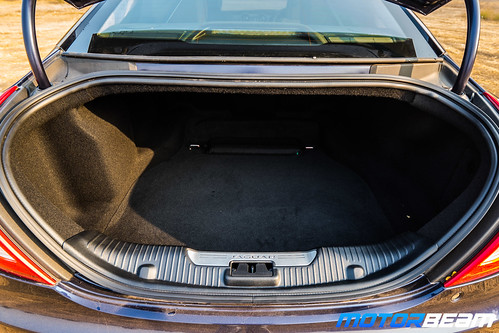 The backseats of the XJ50 are not too different from the front seats. You ‘absorb’ into the seats in no time thanks to the brilliant cushioning on offer. The backseats also pamper you with heated, cooled and massage function in addition to a repertoire of adjustments. The only trouble is that the rear seat controls are split between the doors, armrest and the AC-console and we wish they were all at one place. The legroom and headroom are sufficient but short of beating the class-best. While the sleek windows look great on the outside, on the inside they feel a touch too narrow. The large front seats also compromise the visibility but you get a two-part panoramic sunroof that prevents the backseat from getting excessively gloomy. You also get large entertainment screens which do pretty much anything to entertain you and the XJ50 also comes with wireless headphones. 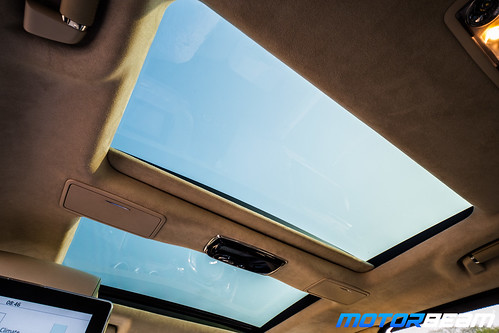 The massive panoramic sunroof gives the cabin an airy feel

The interior feels sporty although quality levels could have been better

The interior of the XJ50 is positively charming and has oodles of character. But it is not perfect. The quality of materials at large is not in the league of the Germans and while it is a good fusion of old and new, it does not do it with the same harmony as the Mercedes-Benz S-Class. Plus there are quite a few knobs and buttons on the centre console which, in the world of touch controls, might not be to everyone’s tastes.