What was for a long time pure monopoly for Kawasaki has now turned into a heated playground of sorts. Fun is no longer restricted to high capacity bikes as lower displacement machines offer a lot of thrill as well. After KTM challenged team green for a fight, it is now Yamaha’s turn to steal some thunder from the Ninja 300 with its R3. The YZF machine has a lot in common with the Kwacker but can it better it? The R3 also faces a tough opposition from team orange. This three way battle is not going to be easy.

Motor Quest: The Kawasaki Ninja 300 is the oldest bike here and was launched in 2013. Meanwhile, the KTM RC 390 was launched in 2014 and the Yamaha R3 went on sale in 2015. The Japanese bikes come via the CKD route and are assembled in India while the Race Competition machine is manufactured locally. 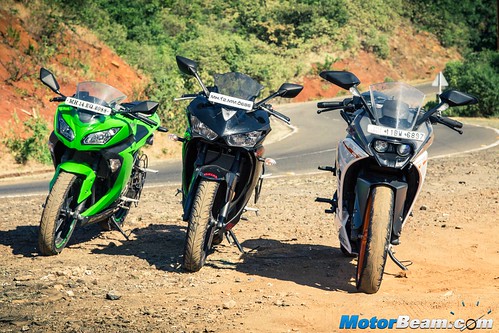 The Kawasaki Ninja 300 still looks the best in this segment

Styling – The Yamaha R3 is the newest bike here and is a very attractive machine with some design influence coming from the R6. The R3 also has the most length and height here and somehow looks better in black shade than the dual-tone silver and blue which we aren’t fans of. The Kawasaki Ninja 300 still holds its own in terms of visual appeal as the mini ZX-10R design still shines through and the front-end is sharper than that of the R3. We really like how the front indicators are neatly integrated and don’t bulge out like in the case of the Yamaha. 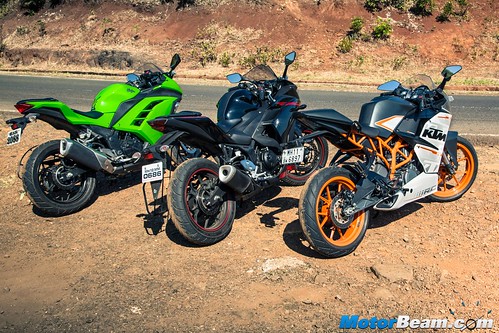 The R3 is fresh, the KTM is wicked while the Ninja 300 looks bigger than it is

The KTM RC 390 follows a completely different design ideology when compared to its Japanese rivals. It doesn’t believe in being understated or reserved, it’s outright flamboyant with the orange coloured frame and wheels while the front sports wicked looking twin projectors (no guessing then that the RC 390 has the best headlight illumination here). The frame is exposed, the rear seat looks like a cowl and while the RC 390 is the widest here, it’s the shortest in length and height. In spite of its age, it is still the Ninja 300 which draws the most attention and the recently launched anniversary paint livery is nothing short of eye-candy.

The console on the Japanese bikes are analogue-digital, making them much easier to read

Instrument Cluster and Switchgear – Both the Japanese bikes come with an analogue-digital instrument cluster while the RC 390 uses an all digital unit. There is no matching KTM when it comes to the amount of features packed into the console including distance to empty and kms to service. But the RC 390’s console isn’t the best in terms of readability and the digital tachometer isn’t legible when you ride fast. The Ninja’s cluster is basic in comparison as it misses out on even a gear position indicator which the R3 has, the Yamaha also getting the best looking console here. All bikes have similar switchgear, the KTM coming with backlit switches while the Japanese bikes have slightly better feel on the buttons. 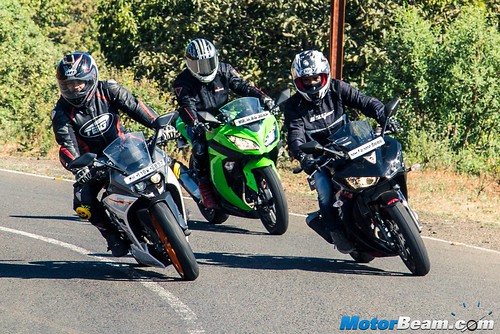 The KTM lacks comfort, the R3 is upright while the Ninja is in between

Ergonomics – The KTM RC 390 has the most aggressive riding position and is thus the most tiring bike on a long journey, it is also very uninviting for a pillion. The Yamaha R3 and Kawasaki Ninja 300 are much more comfortable in comparison, having a relaxed seating position. The R3 is a bit too relaxed while the Ninja is a bit sporty with the lower handlebars compared to the R3, giving it both comfort and a sporty feel at the same time. The seat height of the R3 is lesser than that of the Ninja 300 so tall riders feel better on the Kwacker but the Yamaha has the best cushioning of the seat but lacks grab handles for the pillion. Meanwhile the Ninja also gets hooks at the rear for mounting your luggage on the rear seat. Between the Japanese machines, the Kawasaki has a better pillion seat and it also boasts of the best quality here, the KTM coming last, again. 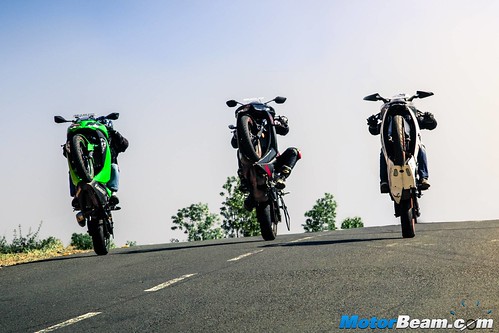 Performance – If you believe there is no replacement for displacement, then today is a good day for you because the KTM RC 390 with its 373.2cc engine belts out the most power and torque, 43.5 PS and 35 Nm, making it the fastest in doing the ton at 5.62 seconds. The Yamaha R3 uses a 321cc motor that is close to the orange machine in output, producing 42 PS and 29.6 Nm, resulting in 0-100 km/hr coming up in 5.79 seconds. The Kawasaki Ninja 300 has the poorest numbers on paper, so the 296cc mill generates 39 PS and 27 Nm, naught to hundred being done in 6.38 seconds. These numbers don’t tell the complete story because the KTM is single-cylinder while the Japanese machines are parallel-twins. 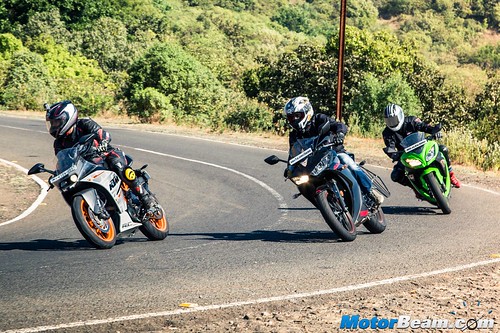 What this means is, although the KTM RC 390 is very fast, it just lacks the refinement of its rivals and also has a big issue of over-heating in stop-go traffic. The Ninja 300 and R3 face no such problems and have very good heat dissipation too, Kawasaki doing it slightly better. So if you ride too often in the city, the RC 390 is a strict no for you while the R3 excels here as it has the best low-end performance. The KTM excels in the mid-range while the Kawasaki has the best top-end. The RPM at which peak power and torque is produced also gives a good picture as the Ninja 300’s peak torque comes in at a whooping 10,000 RPM. 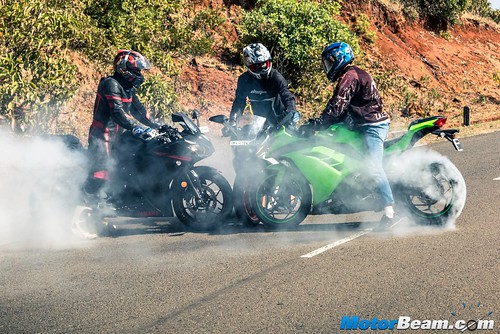 Burn some rubber, these bikes have enough speed for Indian roads

The Kawasaki’s top-end centric power is actually a good thing because these are sport bikes and thus one can pull the Ninja 300 all the way to a massive redline of 13,000 RPM. The motor on the R3 doesn’t spin beyond 12,500 RPM while the RC 390’s rev limit is set at an early 10,500 RPM. With the Kwacker also having lower punch lower down, the top-end gets further amplified, making it a hoot to ride. Not to forget, the Ninja’s jet-fighter exhaust note further brings in the rush. The R3 too is a nice sounding machine and is the most refined motorcycle of this lot, the Ninja not being far behind but the KTM isn’t on the same page when you talk smoothness. 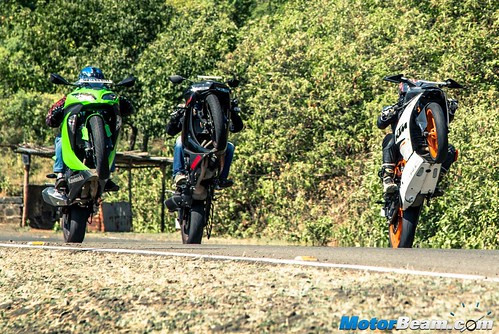 Still, it’s the KTM which can scare you silly as it takes off with some serious punch. But the gearbox on the RC 390 isn’t as good as the R3’s or Ninja’s, the green and orange machines also getting slipper clutch which is of great use, even in non-track riding. Our back to back VBOX tests with the same rider showed the Kawasaki to be the fastest in top speed as the R3’s meter is the most optimistic but real speeds are close to the KTM, the YZF machine topping out at 175 km/hr while the Ninja 300 does 182 km/hr, the RC 390 maxes out at 173 km/hr. Clearly the KTM isn’t made for the city but neither is it a highway machine as it has the lowest fuel tank capacity of 10-litres while fuel efficiency is 24 km/l, same as the R3 which has a 14-litre tank. The Ninja 300 has a massive 17-litre fuel tank and returns 28 km/l, giving it an extra range of 236 kms over the RC 390 and 96 kms over the R3. 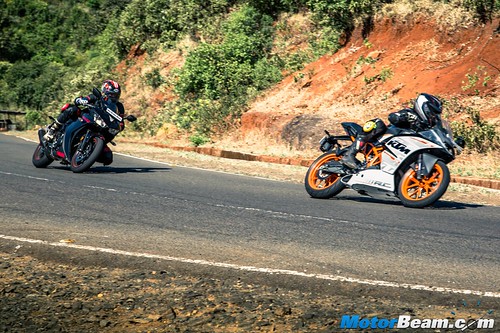 The RC 390 has the most superior handling, leaves the R3 much behind

Riding Dynamics – The performance of the KTM signifies it’s a track machine because it’s not good in the city and doesn’t have a big enough tank for highway riding, nor is it comfortable enough for touring. But show it a set of corners and the RC 390 shines bright, leaving behind its Japanese rivals in the dust. All this is thanks to the superior hardware on the KTM as it uses a trellis frame, upside-down front forks, wider Metzeler tyres and the shortest wheelbase in this company. Being very stiff with a dedicated riding position and with the lowest weight here, the KTM is a blast to ride with super sharp handling. 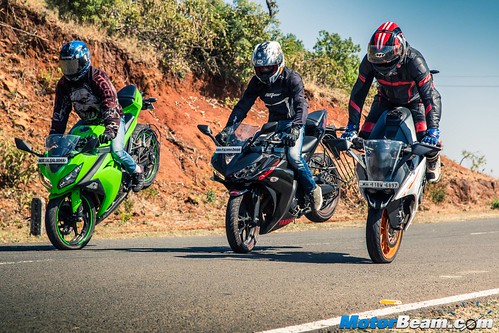 The Ninja 300 and R3 have similar underpinnings with lacklustre tyres but the MRF rubber used by Yamaha is more grippy although the lack of radials, flat profile tyres and forward set pegs (in comparison to the others) do rob away confidence on the YZF. That and the fact that the R3’s suspension is the softest here, gives the Ninja 300 an edge in handling, it also has the better stability thanks to the longer wheelbase. The RC 390 has the biggest brakes here, it also gets steel braided brake lines and standard ABS which isn’t even offered as an option on the other two motorcycles. Still, stopping power is the best on the R3 and the worst on the Ninja, the KTM brakes lacking in initial bite. 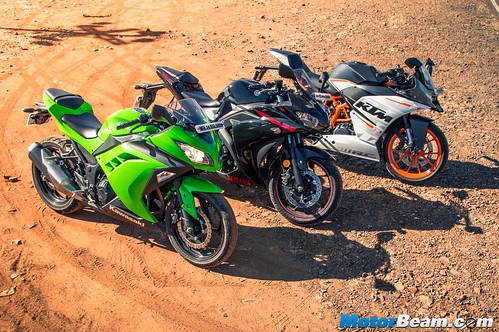 Verdict – The KTM RC 390 is the most fun to ride bike here with its stupendous performance and razor sharp handling but it lacks the practicality quotient. Compared to its Asian rivals, the Race Competition machine doesn’t offer comfort, quality or refinement but its mouth watering price tag makes it the pick for those who seek value. Both the Japanese machines are overpriced as they come via the CKD route but they also have more refined parallel-twin engines which make them at home in all types of conditions, be it city, highway or even the track. Between the R3 and Ninja 300, it’s very very close and although the Kawasaki is the oldest and more expensive bike here, it manages to edge ahead of the R3, but by a minuscule of a margin. With its big bike feel, premium sales and service KTM network, slipper clutch, ballistic top-end performance and jet-fighter exhaust note, team green has managed to keep its position on the top.

The Kawasaki Ninja 300 and Yamaha R3 aren’t very far apart and choosing one amongst them can be difficult but the green machine edges ahead by a very slim margin. The KTM RC 390 is a winner in its own right but only for the hardcore riders. 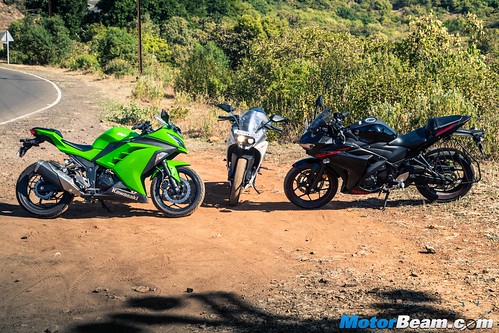 The KTM is a different bike altogether, the Japanese bikes are similar

“The Japanese bikes are much better in quality, comfort and refinement which matters a lot to those who ride daily and also tour on their bikes. But if I had to choose one out of the three, it would, without doubt, be the KTM RC 390. The Katoom is the only true sports bike here and it offers the riding thrill that motorcycles thrice the price don’t offer. Not to forget, the RC 390 is the fastest Indian!” – Faisal Khan, Editor, MotorBeam.
“The R3 feels a step down to ride from the R15 because neither does it have the same awesome hardware and nor does it possess the racing instinct that Yamaha so proudly advertises. It is still a very good package but pay a bit more and the Kawasaki Ninja 300 offers a bit more too. My choice would be without doubt the KTM RC 390 for it comes with the crazy performance and goodies at a mouth watering price.” – Dhanil Vira, Road Tester, MotorBeam.
“I like a bike which is fast and smooth at the same time. Between these three, I will go with the Ninja 300 because of its overall capabilities. The RC 390 is fast, has more performance than the other two bikes but isn’t suited for daily commuting because of its sporty ergonomics. The R3 is smooth but tries to imitate the Ninja 300 in too many places. The Kawasaki can corner well, it’s smooth and is also a good touring machine.” – Viraj David, Road Tester, MotorBeam.

Yamaha R3 Could Get Deltabox Frame With R1 Inspiration