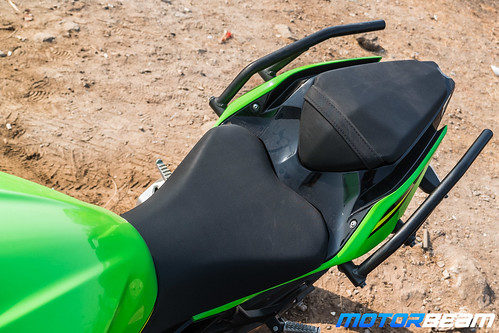 785 mm seat heigh is very accessible for most riders

Ergonomics – The seat height appeals to both short and tall riders while the seat is comfortable as you don’t sit crouched on this green machine, instead it’s mid-way of upright and sporty. The peg positioning is a bit of an issue though as the rider’s heel touches the exhaust shield. The rider sits with the bike while the pillion seat is quite high and small too. The mirrors on the Ninja 300 were not the best but the ones on the Ninja 400 are different and give a good view of what’s behind. The overall ergonomics are more like a sports-tourer rather than an entry-level supersport. 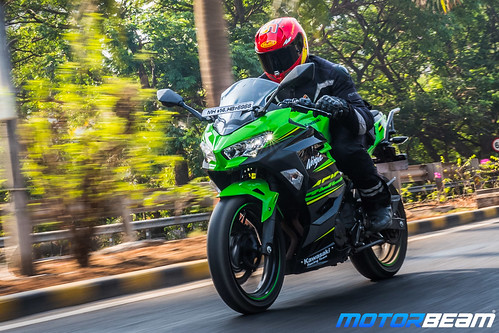 Performance – Powering the Kawasaki Ninja 400 is a 400cc parallel-twin motor that has been developed with the Ninja 300’s engine as a base, upping both the bore and stroke while also increasing the compression ratio. The motorcycle produces a class-leading 50 HP of power and 38 Nm of torque, a significant uptick from its predecessor. 0-100 km/hr takes 5.2 seconds and the top speed is close to the double ton. But it’s not the outright acceleration that’s so impressive, in spite of the increase in output, Kawasaki has managed to bring power and output at lower revs, resulting in decent pull in the low-end although it’s really the mid-range where it starts to get into its own rhythm while the top-end is where the action lies as the motor simply jolts ahead with a scream, all the way till 12,500 RPM. 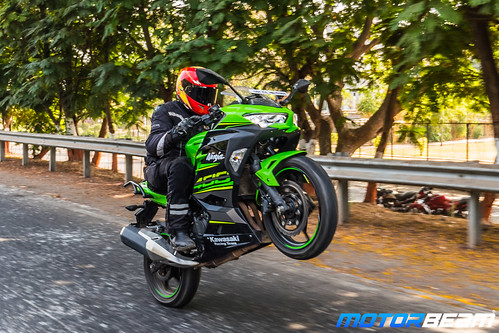 Parallel-twin rumble is very exciting, it builds up along with the revs

The motor isn’t as refined as the Ninja 300 though and there are vibes which creep in, especially when you get past 6000 RPM but isn’t felt as much post 8000 RPM due to the crazy scream from the mill in the top-end. Kawasaki has reduced the tank capacity from 17-litres on the Ninja 300 to 14-litres on the Ninja 400, the fuel economy has dropped too, around 28 km/l, making the tank range suffer. The 6-speed gearbox is smooth shifting and has a slipper clutch which is light to use but shockingly there are no adjustable levers, neither for the clutch nor for the brakes. 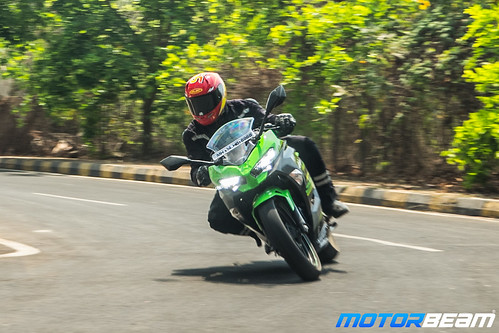 The motorcycle handles really well while being comfortable too

Riding Dynamics – Kawasaki has completely revised the underpinnings of the Ninja 400, it now uses a trellis frame, fatter forks, shorter wheelbase, sharper steering geometry, wider tyres and lighter wheels too. All this has resulted in a weight saving of 6 kgs over the Ninja 300, resulting in improved agility, better handling and more composure at high speeds, it also feels more eager to corner due to the sharper steering and gripper tyres. Ride quality is good and the Ninja 400 does a great job on bad roads, it also doesn’t have any issue on big speed-breakers. The brakes are now bigger and better, offering excellent stopping power. The tyres, on the other hand, don’t do justice as they keep losing grip until they are properly warmed up.