This has truly been a great decade where the two-wheeler market in India has flourished tremendously. The influence is seen not just in the corners of the country but even beyond borders. The option everyone has today is like choosing an ice cream from 31 flavours. With this there is also a rise in the number of motorcycle tourers in the country. We are blessed with incredible beauty on all four corners of the land; and each place is worth the ride. Like any other field, we have riders who ride to post their photos on social media and the ones who post because they have done the ride. The latter are the real deal. And these guys need the perfect machine to have a thrilling experience of their life.

Before the Kawasaki Ninja 650 is elaborated, allow me to put out there some riding scenario and situation at the moment. 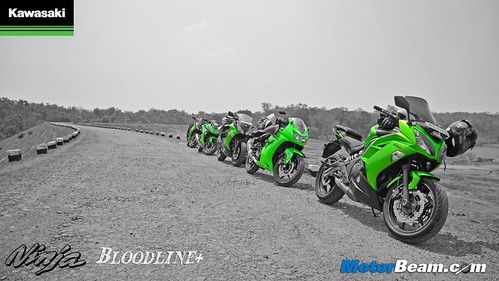 The Challenges – We have bikers who ride on month long tours, the midnight junkies, a quick fire on the weekend, a sudden outburst in the evening; actually anytime is a good time to go on a ride. We now have super smooth 4-lane highways connecting big metros, there are the state highways in more or less good condition and well connected to the interiors. And then there are the village or track roads which are rarely good but in great condition for off-road drama.

You need a bike that can jive with all the above melodrama. And with surety I can say that the Kawasaki Ninja 650 establishes itself the perfect fit.

How did I come to this conclusion? Well why not ride a distance to prove the point.

I joined a group of tourers who call themselves L.O.S.T. – League of Sport Tourers. They had planned for a ride to Goa over the long Holi weekend. The group has plenty of Ninja 650 riders; and recently did a Bhutan ride on this grand machine. 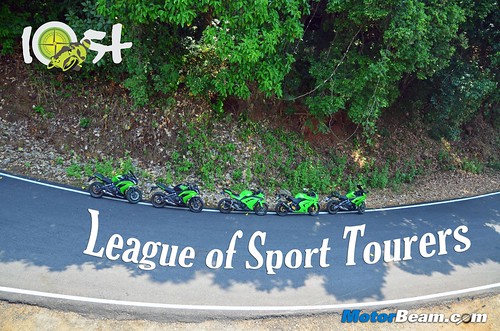 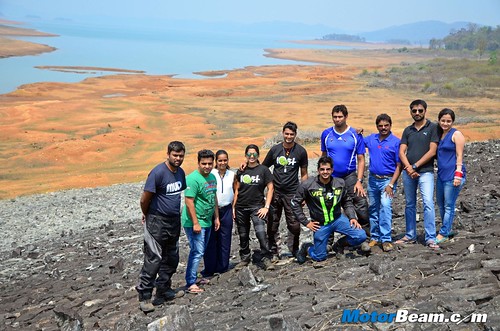 Goa is always fun to ride. The never ending ghats, the super fast highway, jungle roads, all leading to the sea – it’s the perfect treat to the motorcycle tourer.

This distance to Goa (South) is 600 kms from Mumbai, and when you want to enjoy the trip thoroughly, then it’s pretty obvious you want to reach there as soon as possible. So the approach is starting before dawn and riding hard till afternoon. And by hard I mean a pace of 100 km/hr + speed figure. Here is where I love the Ninja 650 — the bike just takes off instantly and without breaking a sweat, cruises swiftly in that three figure speed. Even when suddenly if you have to come down to 70-80 km/hr, takes just 2-4 seconds to jump back to 100 km/hr without the need of a downshift. We are glad that India has highways to sustain such speeds; and to cover great distances, the bike will have to find comfort in speed riding. An endurance machine is the need here. The Ninja 650 just hits the right cord. Even after hours of riding fast, the bike gives the impression of “I can take more, can you?” All smiles for this 650 mill.

You are now on the ghats. And believe me when I say Konkan ghats are really long and possess endless blind curves/corners. One mistake and you are fired.

The Ninja 650 dives into these curves effortlessly. Minimal rider input is required unlike big brothers of the Ninja bloodline. Handles gracefully with pillion and luggage onboard too; I’ll say the bike rates high when it comes to stability. Not once did I feel any off balance or shaky grunt on the turns. 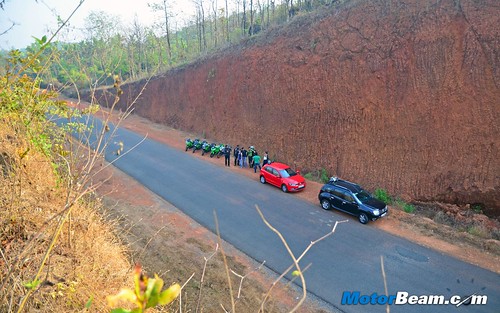 The brakes are also very responsive and state of the art. Although I sorely miss Kawasaki’s ABS feature. It would have been a cherry on top. Nonetheless I believe the next model update will get ABS, so no worries there anymore. Under good hands of a skilled rider, one can bring the bike to a standstill on non-abs brakes too (If you are riding a 650, I presume you have put in some significant saddle time). However, ABS is a must for those emergency stops.

When exploring Incredible India, you really need to get to the deep interiors of the country. You’ll find yourself at astonishing places. But to reach there you need to put some efforts on the trail, off-road is the game here. The bike does not have that much ground clearance but after doing trips to the Himalayas, 650 riders from KNOGs and LOST state that the Ninja handles off tarmac surprisingly well. One can go the distance when needed. I have a feeling that the naked Ninja, the ER-6n will be good fun when off the tarmac is concerned. Also note that even if the belly of the 650 scrapes the ground, do not panic, the bike can take a little hit. There has been no complain or issue about the exhaust’s function getting interrupted. 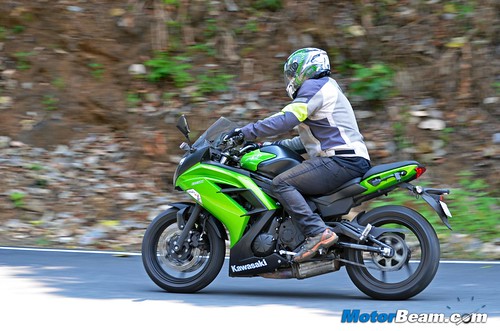 Maintenance – I have heard many stating this fact that Kawasaki spare parts are expensive. But focus on the whole picture, you rather buy cheap parts that don’t even outlive a quarter year or go for the expensive ones which are of superior quality and have longevity?

The Ninja never breaks down nor do the parts wear out quickly. And the best part, Kawasaki has done a great job in the service department. A true story – couple of Ninja 650s fork oil seal had come off somewhere in Madhaya Pradesh; the riders got themselves to the closest Kawasaki service station. They were anxious about the mechanics working on the bikes, whether they’ll do a fine job or not! To their disbelief, the mechanics assured them not to worry, they’ll do it perfectly and make sure the bike is all ok for further ride up the mountains (this was during L.O.S.T.’s Bhutan ride). A full polish of the bike was thrown in free of charge. Now that’s how you win customers. 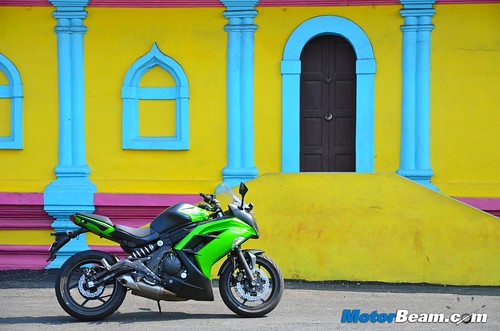 Ninja 650 is as vibrant as it can get

Pillion Perspective – Today is the time when even the spouse or girlfriend is sporty about biking. They too want to join their loved ones on long bike rides; the seating position of the Kawasaki Ninja 650 is very apt. A pillion can sit comfortably and be at ease for over 100 kms of ride length. A friend of mine told me in a humorous way, ‘I’m seeing death first and then you’ll spot it’, this happened when he was sitting pillion with me on a Hero Karizma; point is that I felt no such feeling when I was sitting pillion on the N650, considering I’m not much of a pillion person. If I have to take my girlfriend along for long rides, then the Ninja 650 will be the ideal choice. 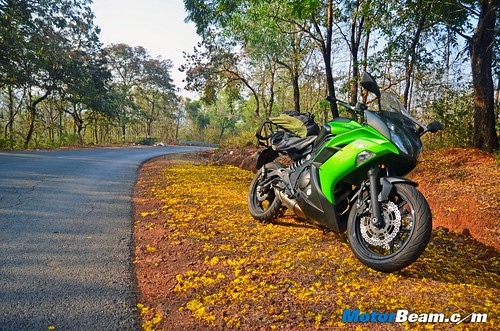 This Kawasaki dominates the roads

Luggage – Despite being all muscle, the 650 tank’s top can accommodate a decent tank bag. Even the large capacity one if the rider is of medium built. The rear seat can take on the saddle bags with just few tweaks to the lower end so the bag doesn’t come close to the rear tyre. Some have even managed to fit a touring plate on the rear side using the grab rail bolts. A good medium or large size top case is just what you need when you want to ride comfortably with pillion and luggage onboard. 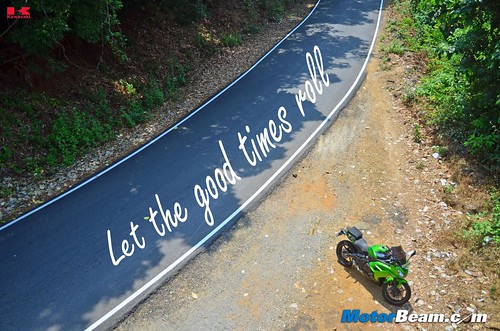 Do I need to say more

Journal Entry – I thoroughly enjoyed riding the Ninja 650 to Goa with the L.O.S.T. group. We reached the destination on time; the weekend was spent well on the beach; takes away all the stress accumulated since days of hard work. And the ride back home was also a swell. Everyone had fun and reached home safe.

Goa combines fun, play, food, culture in an interesting way. I would recommend everyone to ride to this place at least once. 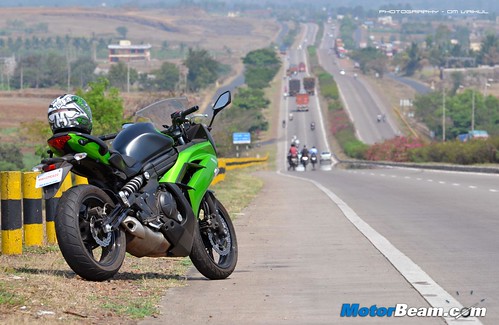 The Kawasaki Ninja 650 is a mile muncher

Note – The Kawasaki Ninja 650 has been around a while now. It’s the tried and tested machine for most seasoned tourers. The service record too shows a clean slate. Many agree that it’s the perfect blend of power, performance, comfort and convenience; Tour — Go Fast — Cruise – Pillion, leads in almost every front. I see the Ninja 650 has a complete package — an ideal machine to make wonderful ride stories for life. I hold the Kawasaki ER-6n also equally good, since both have the same heart. All I wish now that the Versys 650 hits Indian shores and near completes the 650 family. 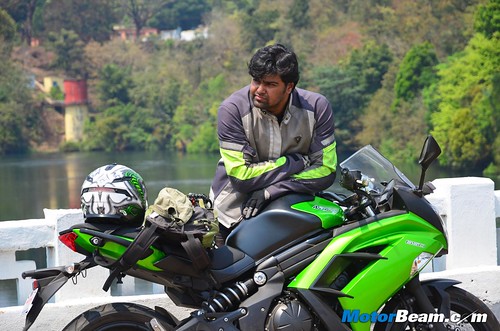 It was a privilege 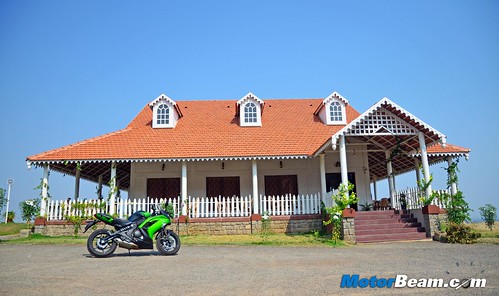 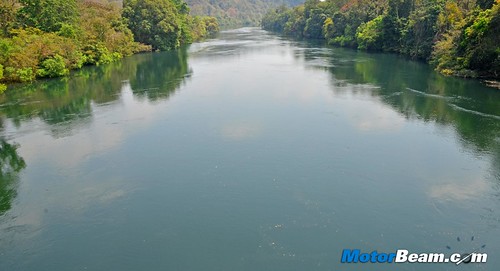 The Kali River – home of crocodiles 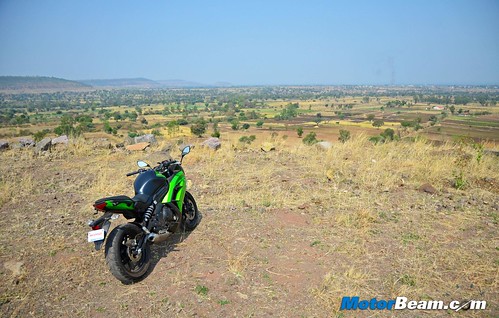 Ninja 650 – an ideal machine to explore far beyond 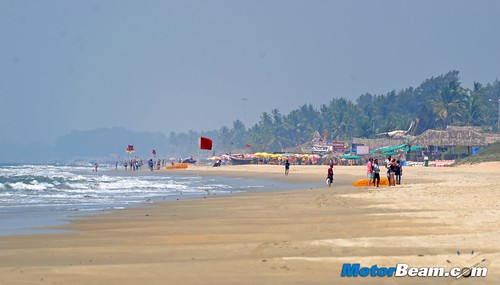 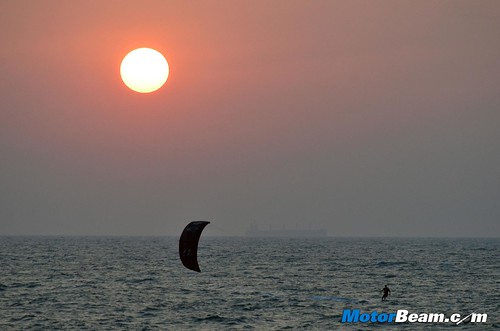 A sunset to pause for 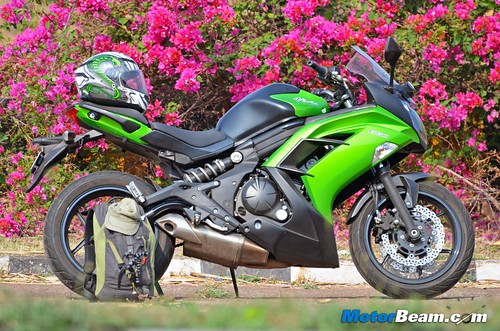 Handsome is the word 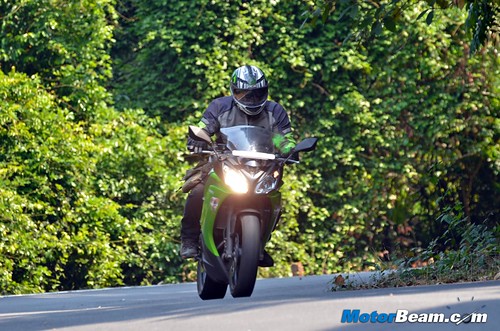 Ninja 650 – a pleasure to ride for long distances 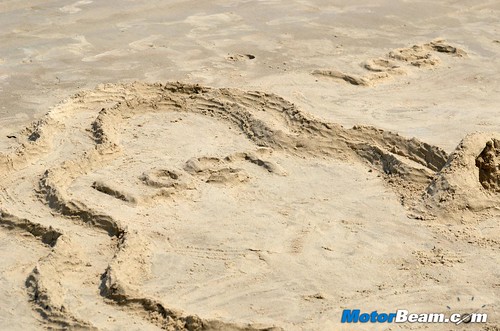 Our very own track on the beach 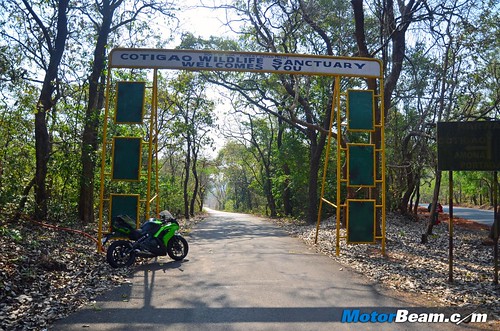 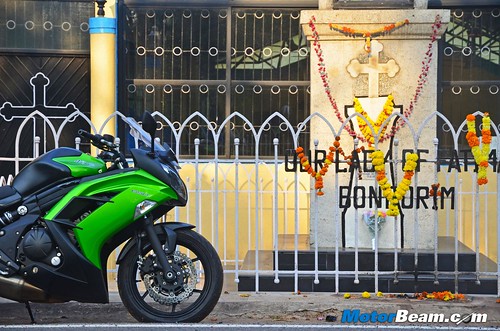 Kawasaki Introduces New Colours On Middle-Weight Bikes For MY2016