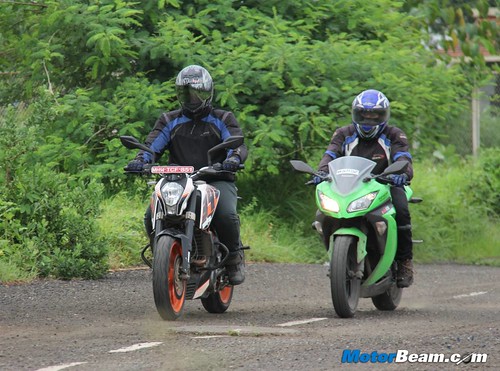 Good times don’t seem to be rolling at Bajaj Auto’s camp. After facing a strike at its Chakan facility, India’s third largest 2-wheeler manufacturer is recalling two of its performance bikes in India, albeit silently. A few units from the initial KTM Duke 390 have been recalled for over-heating while the Ninja 300’s recall is a global one. Kawasaki announced the recall of its 300cc Ninja last month and now the recall exercise is being undertaken in India, however without any announcement.

Couple of our readers informed us about dealers calling their bikes for an ECU replacement. We spoke with a nearby dealer to confirm the same. In Navi Mumbai, 11 bikes have been recalled and 7 of them have already got their parts replaced. The ECU replacement takes around 5 minutes and we urge all Ninja 300 owners to get in touch with their nearest KTM/Kawasaki service centre immediately. The ECU has an improper setting which can cause the bike to stall while decelerating.

Kawasaki also announced another recall for the Ninja 300 recently but that’s not for the Indian market as the recall pertains to bikes equipped with ABS. Meanwhile the Japanese automaker has launched the 2014 Kawasaki Ninja 300 which gets new colours. A Special Edition (SE) of the bike has been launched which is available in limited numbers (pictured below). The Ninja 300 SE gets a dual tone paint job with red tape on the rims. This does boost the visual appeal of the baby Ninja. The Ninja 300 SE is available in two colours, Lime Green with Ebony and Pearl Stardust White with Ebony, offered in both non-ABS and ABS variants. An India launch seems unlikely but the 2014 model sees a minor price hike.