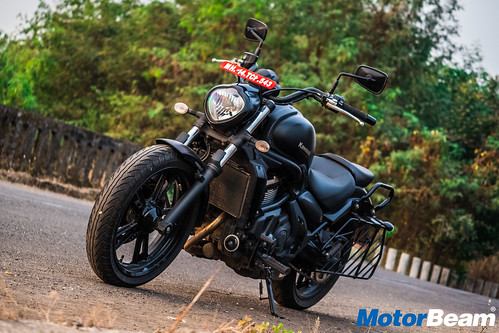 The Vulcan has an accessible seat height of just 705 mm

Ergonomics – The ergonomics of the Kawasaki Vulcan S are just like any other cruiser. The handlebar is high, footpegs are front-set and seat height is low. However, Kawasaki offers an Ergo-Fit package with which the owner can get the seat, handlebar and footpeg position adjusted to three different positions individually. Although we had the stock setting on our test bike, it was pretty comfortable. The seat height is just 705 mm, making it very accessible for all kind of riders. The seat is scooped out and provides good lower-back support. The pillion seat is also very comfortable but it’s not wide enough. The grab-rails come handy for the pillion while also solve a greater purpose which is to mount saddlebags with ease. 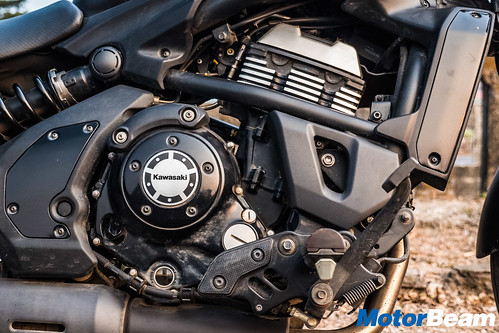 Linear power delivery but the fun stays in the top-end

Performance – Powered by a 649cc parallel-twin engine, the Kawasaki Vulcan S produces 61 PS of power and 63 Nm of torque. Although the numbers are very intriguing, the power delivery happens in the top-end of the rev-band. This is completely different from how a cruiser engine should perform. But as the powertrain is shared across the 650cc line-up, the Vulcan S feels a little less lively as compared to other cruisers. However, the throttle response in the mid-range is brilliant and as the motorcycle is very rev-friendly, it redlines close to 10,000 RPM. The gears are quite tall and the Vulcan can hit the ton in second gear itself. Yet it misses out on traction control and hence keeping a calm throttle is necessary. 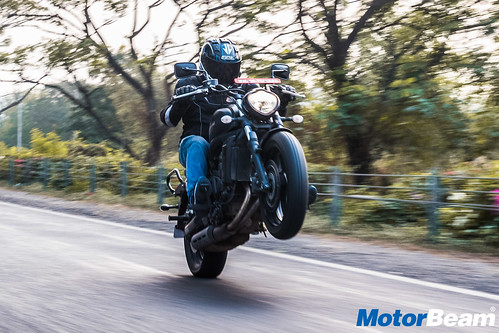 The Kawasaki Vulcan S doesn’t mind to lift a wheel

The Vulcan S has a parallel-twin rumble, it gets louder as the revs build

The Vulcan S gets a 6-speed gearbox and the gearshifts are quite smooth while the clutch is decently weighed although on the heavier side. However, the motorcycle cannot handle clutchless shifts, the rider needs to engage the clutch while shifting gears. As Japanese motorcycles are known for the refinement, the Vulcan S is refined too. Although if you hit the redline, there are some amount of vibrations that can be felt on the footpegs and the handlebar. There is no harshness from the engine and the exhaust note isn’t loud either. It has a rumble and it gets loud as you rev harder but then it’s only the rider who can enjoy the sound, unlike in traditional cruisers where there is a lot more sound at idle and in the low-end of the rev band. 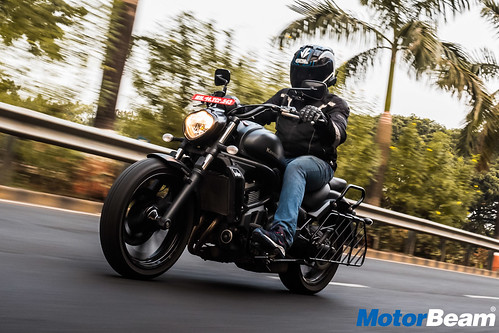 High speed stability is also brilliant thanks to the perimeter frame

Riding Dynamics – The Kawasaki Vulcan S rides like a cruiser at low speeds and a sports tourer at high speeds. The response from the handlebar is just mind-blowing. The perimeter frame helps a lot in improving the dynamics while the tyres grip well. The rear suspension feels bottomed out when you encounter bad roads while the long travel front suspension works flawlessly. Manoeuvring through traffic can be tedious as the 235 kg weight can be felt but the low seat height becomes helpful in such situations. 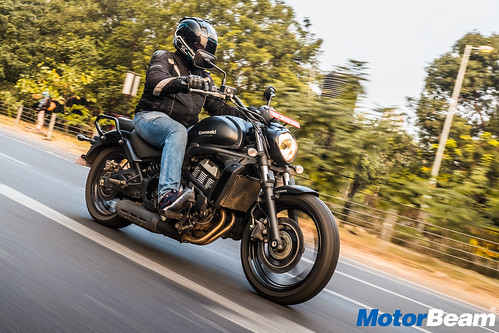 Comfort at all times is a possibility on the Vulcan S

The Vulcan S rides like a sports tourer, dynamics are just feedback rich

While the Vulcan S gets dual-channel ABS, the braking isn’t the best in terms of feedback as it gets only a single disc at the front. The bike nosedives under heavy braking and the brakes lack the initial bite but then gradually the motorcycle comes to a proper stop. Overall, the Vulcan is a very comfortable motorcycle to ride and the option of the Ergo-Fit package can help owners choose a custom riding position. Kawasaki also offers a Tourer kit which comprises of luggage carrying accessories like bags, mounts and visor.

News highlights of the day include Triumph, Ola, Royal Enfield and Skoda. Triumph - The premium British bike maker is about to launch the Tiger   END_OF_DOCUMENT_TOKEN_TO_BE_REPLACED

Royal Enfield has developed new 350cc platform for future bikes. The coronavirus has let down the auto industry and the buyer sentiment.   END_OF_DOCUMENT_TOKEN_TO_BE_REPLACED

RE to bridge the gap between 350cc and 650cc motorcycles. Royal Enfield is the mid-size king in the domestic market. Their 350cc bikes are   END_OF_DOCUMENT_TOKEN_TO_BE_REPLACED