Kawasaki had a very good strategy as they launched everything they could offer in the 650cc segment one after another. The adventure-touring Versys 650, full-faired sports tourer Ninja 650, a street-fighter Z650 and a cruiser, the Vulcan S. However, I rode the other three 650s but I was very keen on riding the Vulcan S. You don’t see Japanese cruiser motorcycles make it to India and for a fact, people actually love it. Kawasaki was happy to give us the bike for a weekend and we got it from Chakan and completed the review in Mumbai. I knew I was in for a surprise on this Japanese middle-weight cruiser.

Motor Quest: The Vulcan series from Kawasaki ranges from 125cc to 2053cc. However, in India only the 650 S series with a single model is available, the Vulcan S. The model started out in 2015 as a sports cruiser denoting the letter ‘S’ in the name. It also shares its powertrain with other Kawasaki 650cc motorcycles. 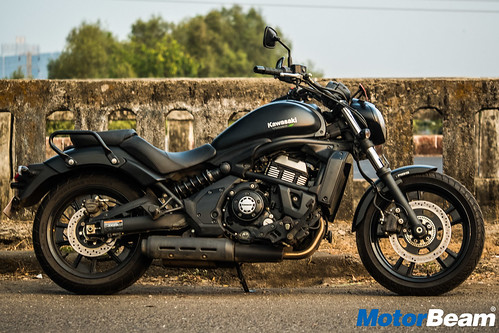 Styling – With a quick glance one could say that the Vulcan looks very much like a cruiser motorcycle. But with a closer look, it has a very non-traditional design with a unique frame and the suspension setup. Off-size front and rear tyres, extended handlebars, front-set footpegs and a long wheelbase add a lot to the cruiser styling. The Vulcan gets LEDs only in the tail-light while everything else is halogen. The long travel suspension at the front with the offset monoshock at the rear and the underbelly exhaust make it stand out. The test bike has an all-black colour scheme and the only green I saw was the letter ‘S’ written on the tank. One can also get an orange-black colour scheme which looks even better. 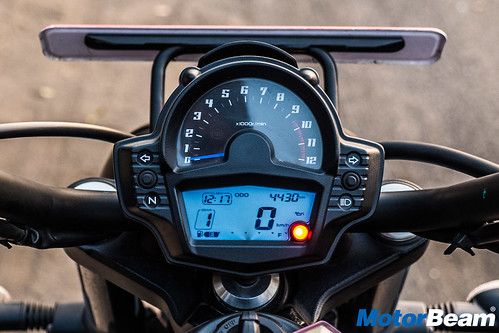 The instrument cluster is easily readable even in bright sunlight

Instrument Cluster and Switchgear – The console on the Kawasaki Vulcan S is an analogue-digital unit. It is the same unit we saw on the ER-6n a few years back. Although it might not be the latest one, the cluster does provide a decent amount of information. The tachometer is analogue while everything else is integrated within the digital LCD. Like the odometer, twin trip meters, speedometer, gear position indicator, fuel gauge, distance to empty and a clock, all of this is put inside the digital unit. The switchgear quality is very nice and it has a piano black finish with a matte black touch around it. The fit and finish levels are pretty good.

Royal Enfield has developed new 350cc platform for future bikes. The coronavirus has let down the auto industry and the buyer sentiment.   END_OF_DOCUMENT_TOKEN_TO_BE_REPLACED

RE to bridge the gap between 350cc and 650cc motorcycles. Royal Enfield is the mid-size king in the domestic market. Their 350cc bikes are   END_OF_DOCUMENT_TOKEN_TO_BE_REPLACED

Mercedes E-Class Cabriolet and Coupe mid-cycle update revealed. Seems like both BMW and Mercedes-Benz are taking their rivalry to the next   END_OF_DOCUMENT_TOKEN_TO_BE_REPLACED