The 250-400cc motorcycle category has become very famous not only in India but all across the globe. While most manufacturers are bringing out 300cc machines, others choose to play around that displacement area for multiple known reasons. What started with KTM launching the Duke 390 was soon followed by a slew of launches in the performance space, the Kawasaki Z250 following just last year while Benelli has developed a 300cc machine, called the TNT 300. The Italian bike is actually made in China and just like the Kawasaki, it too comes into India via the CKD route. The KTM Duke 390 is manufactured in India and that lends it a drastic price advantage so it does come across as out of place in this comparison but then, all three are aggressive street-fighters and they must fight it out irrespective of how they are made.

Motor Quest: These three street-fighters are from three different countries and yet all were born only this decade. The KTM Duke 390 made its debut in 2012, while the Kawasaki Z250 arrived in 2013 and the Benelli TNT 300 made its first appearance in 2014. 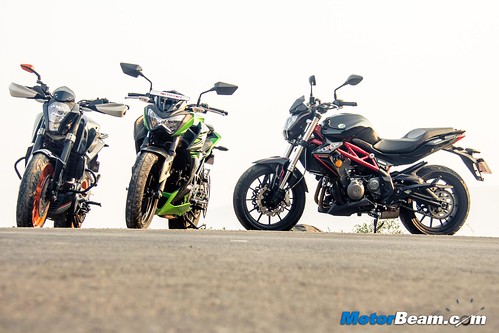 Styling – The KTM Duke 390 is quite common on Indian roads, it’s also largely similar to the Duke 200, its younger sibling, so it doesn’t turn heads as much as the other two bikes here. There is little doubt that the Benelli and Kawasaki look more substancial than the KTM. There is good attention to detail on all these bikes, like the alloy wheels for example, all have their own unique design. The Duke 390 and TNT 300 proudly expose their frames, the KTM having an orange coloured one while the Benelli has a red coloured one (on the black model), the Kawasaki on the other hand has a half fairing. The Kawasaki is also the only bike here with a side mounted exhaust as the other two machines use under-belly units. 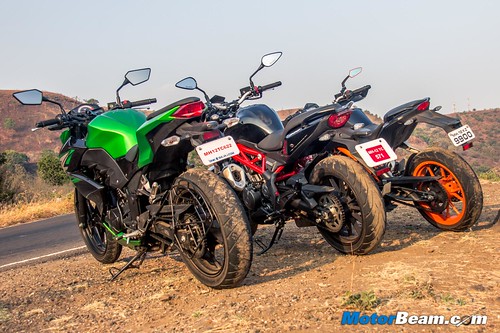 When viewed head-on, there is little doubt that the Kawasaki is the more attractive looking motorcycle with its wide headlight (offers the best night illumination here) that is a lift from bigger Z models like the Z800. On the side too, the Kawasaki manages to look better while the rear is quite attractive on all three bikes, the Z250 missing out on LED lights for both the brake and indicators. The widest rear tyre in this class along with the crysteral effect on the tail light make the Benelli quite a looker but overall, it’s still the Kawasaki that wins our vote in the design department.

Instrument Cluster and Switchgear – Kawasaki and Benelli have gone for an analogue digital layout but neither of these bikes can come even close to offering the level of information the fully digital console of the KTM Duke 390 displays. In terms of pure aesthetics though, the Kawasaki console looks the best while the Benelli’s looks a bit dated. The Duke 390’s fully loaded cluster is so rich with information that it can match a big car’s console, it does have a small tacho which isn’t easy to read on the go. Both the TNT 300 and Z250 get daytime running lights while the Benelli also gets a hazard light and the best key of the trio, it’s a flip key. Switchgear quality is excellent on all these bikes with little to differentiate between them. 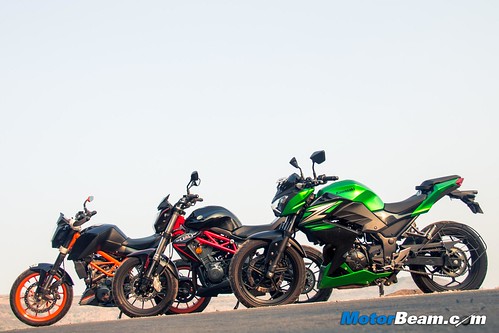 Ergonomics – All these bikes have upright seating positions where you pilot a wide handlebar and place your feet on rearset pegs. Among the three, it’s the KTM Duke 390 which offers the least comfort, both for the rider and pillion. The seats are the hardest on the Duke while the Benelli has the softest. The TNT 300 is the most comfortable bike here with the biggest seat of the trio while the Kawasaki is the best bike when it comes to touring thanks to bungee hooks for luggage attachment. The Kwacker also has the best rearview mirrors. The TNT also comes with an adjustable brake lever. All these three bikes will suit both short and tall riders but the Benelli is the most versatile. 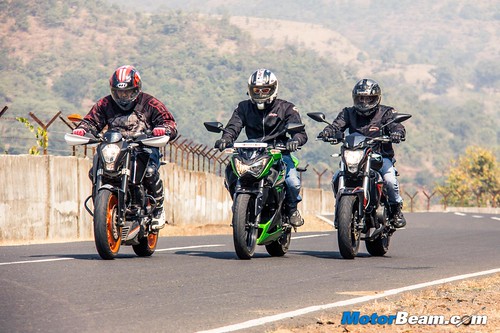 No replacement for displacement, the Duke 390 is the quickest of this bunch

Performance – The big irony in this shootout is the fact that the cheapest bike here runs circles around the more expensive ones. There is no need to even explain, everyone knows that the KTM Duke 390 is much faster than the Benelli TNT 300 and Kawasaki Z250. In fact, the Austrian machine is so fast that it’s a good 2.5 seconds quicker to the 0-100 km/hr sprint, taking just 5.6 seconds. It also beats the other two in top speed, boasting of a top whack of 168 km/hr while the other two are 10 km/hr slower (all numbers are VBOX tested). The Duke 390 is so fast that we put a camera on its tail and shot part of the drag race between the Kawasaki Z250 and Benelli TNT 300, obviously the KTM had to be ridden on part throttle otherwise it would simply vanish. So between the Benelli and Kawasaki, which is faster? Checkout the video below.

As can be seen, the Benelli TNT 300 is marginally faster, taking 8.19 seconds to do the 0-100 km/hr run while the Kwacker manages the same in 8.31 seconds. This wasn’t surprising at all either because the TNT 300 packs in 38.26 BHP and 26.5 Nm against the Z250’s 31.1 HP and 21 Nm. The Duke 390 is the most powerful bike here with 43 BHP and 35 Nm, it’s also the lightest which all adds up to it performance. But there is more than speed which judges how good a bike’s performance is because the KTM motor is a single-cylinder while the other two motorcycles use a parallel-twin layout. Naturally, the Duke 390 is simply no match for either the Kawasaki or the Benelli when it comes to refinement and heat management. 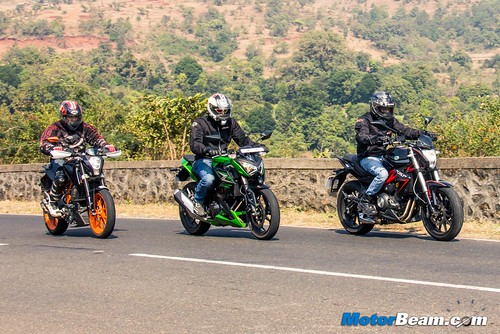 The KTM’s 373.2cc engine isn’t refined and knocks a lot and while all three bikes are tall geared, the Duke 390 feels uneasy in stop and go city traffic because you have to be in first gear and the powerplant heats a lot, no such issues on the twin-cylinder engined Benelli and Kawasaki. Both the locally assembled bikes are fantastic to ride in city conditions and one can also ride in high gear at low speed. Where the 300cc Benelli edges ahead of the 249cc Kawasaki is with its exhaust note, it is by far the best sounding motorcycle in this category and that too by a mile, the sound is just intoxicating. The Z250 sounds better than the Duke 390 and it is also the most frugal bike of the trio, returning 30 km/l against the Benelli’s 28 km/l and the Duke’s 26 km/l. The KTM’s small tank of 11-litres means one has to refuel the bike first while the Z250 and TNT 300 both have big 16 and 17-litre tanks respectively. 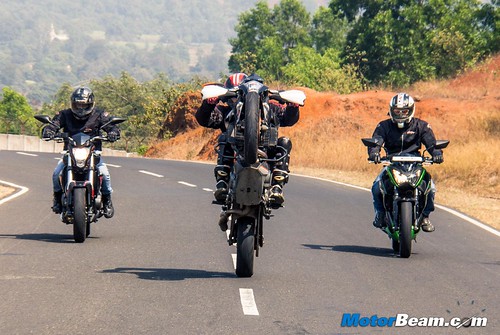 The fun you get riding a Duke 390 is simply unmatched, it’s so freaking fast

So if you want refinment and city rideability, the twin-cylinder equipped bikes are way ahead of the Duke 390, they also sound better, are more frugal, have a bigger tank range and better in-gear acceleration too. But for most of us, performance is of paramount importance and that’s where the KTM is unbeatable. When we were doing this shoot, all of us rode these bikes back to back and everyone just wanted to ride the Duke 390, NVH be damned! Adding fuel to the fire was the fact that our test bike was equipped with a GPR exhaust, so not only was it even faster but also had a deep bassy sound, what a treat. 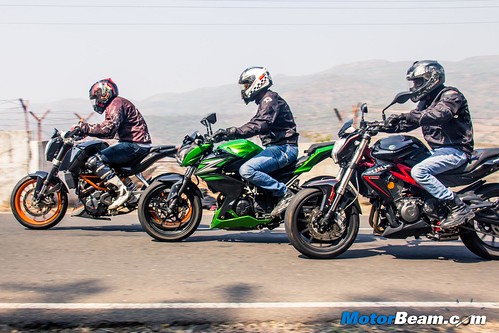 The KTM is first to reach redline while the Kawasaki tops out at a mad 13,000 RPM

The Duke 390’s performance is so wicked that power wheelies are easy and the way it rushes to the redline is simply addictive. The KTM does redline quicker as the rev limit comes in at 10,500 RPM while the Kawasaki has a mad redline of 13,000 RPM and the Benelli maxes out just under 12,000 RPM, the TNT 300 having the slowest revving motor here. The Benelli has the best low-end performance while the Kawasaki excels in the top-end and the KTM is the mid-range king. All these bikes come with a smooth shifting gearbox but the KTM has a heavy clutch, all bikes will happily shift clutchless. Between the three, the Kawasaki has the best shifter but the Duke 390 now comes with a slipper clutch, so you can shift very aggressively. 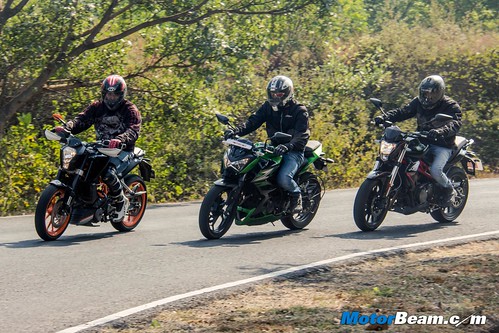 Light weight, sticky tyres and loads of poke, the Duke 390 loves corners the most

Riding Dynamics – KTM’s advantage gets further stretched as it is the best handling bike of the trio. The Duke 390 and TNT 300 get top drawer hardware which the Kawasaki simply doesn’t have. Both the Benelli and KTM gets upside down forks, wider tyres (rear tyres – 140 mm on the Z250, 150 mm on the Duke 390 and widest in the class 160 mm on the TNT 300), trellis frame, steel braided brake lines and grippier rubber (the KTM gets Metzelers while the Benelli uses same sized MRFs with 10 mm wider Pirelli Angels being an option). In spite of the hardware disadvantage, the Z250 offers better handling than the TNT 300 (the Benelli scraping its underbelly exhaust on hard cornering), its lower 168 kgs weight helping over the hefty Benelli’s 196 kgs. Meanwhile, the 154 kgs Duke 390 is just a hoot to ride fast around the corners, it’s so feedback rich and composed. 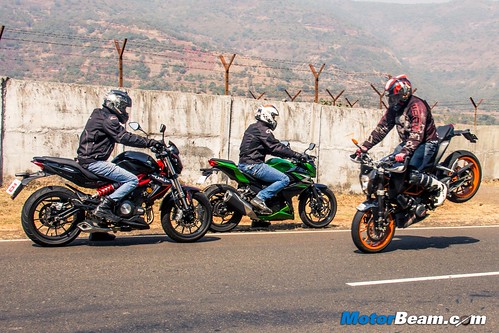 ABS brakes on the Duke 390 are a big plus; CKD models offer way better ride

The Benelli TNT 300 is the most stable motorcycle of this pack, it also uses petal discs like the Kawasaki while the KTM uses regular discs. Where the KTM offers a big plus are the brakes which are ABS equipped, its more expensive rivals here are seen without ABS which is a shame. But in terms of braking performance, we like the TNT 300’s brakes the best (has a dual disc set-up at the front). The Kawasaki and Benelli offer way better ride quality than the KTM, the Duke 390 being quite stiff and doesn’t like bad roads at all. The TNT 300 is simply fantastic over bad roads, doing the best job of cushioning out bumps, it’s also the most stable bike here. 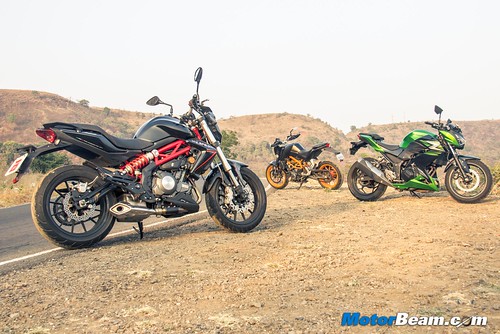 Three motorcycles you can’t go wrong with, all have a lot to offer buyers

Verdict – If you want outright performance, handling and value for your money, it’s a no brainer, the KTM Duke 390 is the bike for you (50% of MotorBeam readers chose the Duke 390 while 27% voted for the Z250 and 23% for the TNT 300 in our last month poll). But for many people, there is more to motorcycling than just speed and that’s where products like the Kawasaki Z250 and Benelli TNT 300 come in the picture. Now both these bikes are quite similar, equally quick, offering high amounts of comfort (good pillion seat and excellent ride quality) and equipped with refined parallel-twin units. So if you aren’t a speed junkie, which one should you pick? There is no denying both these bikes are priced at a premium due to the CKD route but if we had to pick one, the Benelli TNT 300 makes for a more compelling argument, offering better hardware, terrific exhaust note and feeling less overpriced in front of the Kawasaki Z250.

The KTM Duke 390 offers the most thrills for the least money, it also is the easiest to upkeep. However, for those seeking comfort, refinement and touring abilities, both the Kawasaki Z250 and Benelli TNT 300 make for a good buy, the Italian being a better bet over the Japanese. 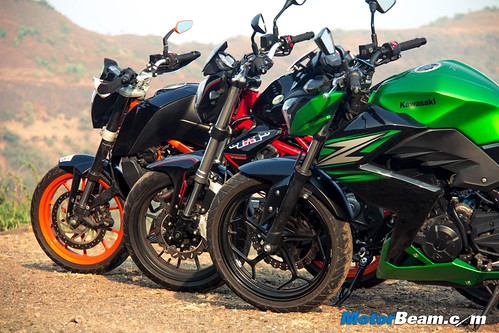 If we had to choose, this is how we would place them in order of buying perference