Oh no, not again, that’s what Kawasaki fans might be mumbling to themselves because whenever Team Orange has taken on Team Green, the latter have not only looked overpriced but also lost the performance honours. But there is more to life than 0-100 km/hr timings right? And that’s why we present to you, the KTM Duke 390 vs Kawasaki Z250 battle. You see, when KTM first launched the Duke 390, there was no such category of motorcycles in India, there still isn’t but Kawasaki’s launch of the Z250 has put the green machine in the Austrian’s radar. Both are naked street-fighter motorcycles and both are sold and serviced through the same network of showrooms and service centres. So naturally, both compete with each other everywhere, right from the showroom to the road. But which one is the better pick? This should be easy, right?

Motor Quest: When KTM launched the Duke 390 in 2013, everyone was in disbelief about the pricing. The Kawasaki Z250 arrived later in 2013 (the 390 Duke made its global debut in end-2012) and was launched in India in October 2014. Both bikes come out from Bajaj Auto’s Chakan facility, the Duke being manufactured while the Kwacker gets assembled via CKD kits. 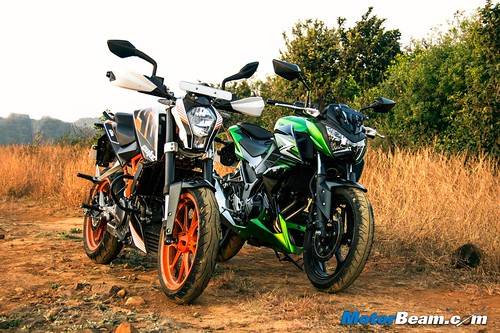 The Duke looks more striking thanks to orange colour, the Z250 has more presence

Styling – The Duke 390 is bigger than the Kawasaki Z250 in every dimension, be it length, width or height. In spite of that, it’s the Kwacker which looks the more substantial motorcycle of the two as the KTM isn’t as beefy. The Japanese machine likes to flex its muscles and isn’t very true to the concept of a naked design. You see, the orange wheeled machine has very little body parts and reveals all in its styling while the green bike has a half fairing, shaped like a Z. Even though the KTM Duke 390 comes with delicious orange wheels and orange coloured frame, the bike isn’t as striking on the road for multiple reasons. 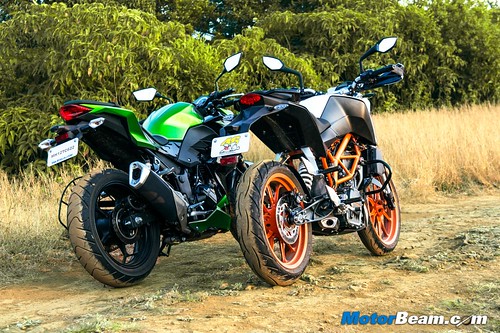 Firstly, the Duke 390 has the exact same design as the Duke 200, with the colour and graphics layout being the big differentiator. Secondly and most importantly, there are way more Dukes on the road than all Kawasaki bikes combined together, so naturally the Z250 has the novelty factor. Still, one will appreciate the Duke for having LED indicators and brake light, both of which are absent on the more expensive Kawasaki. The Duke also has an under-belly exhaust and a visible white monoshock (the Kawasaki’s isn’t visible). With a Z800 inspired front (with those twin headlights that offer better illumination than the Duke) and a rear that’s lifted from the Ninja 300, there is little doubt that the Z250 turns more heads on the road.

Instrument Cluster and Switchgear – The Kawasaki Z250 uses the same instrument cluster as the Ninja 300 but with a white background for the analogue tachometer. The console of the Z250 is very easy to read (big and clear fonts) and we love the fact that this performance bike gets an analogue tachometer as the digital tacho on the Duke 390 isn’t easy to comprehend when you whip open the throttle. The Duke 390 has an all digital console and simply is better when it comes to the things on display. While both bikes come with side stand shut-off (when you put the bike in gear with side stand active), the Duke 390 also displays distance to empty, real time mileage, distance to service, average riding time, average riding speed, gear shift indicator, etc. Switchgear on both bikes is good and while the Duke 390 comes with backlit switches, the Z250’s switches feel a bit better in feel. 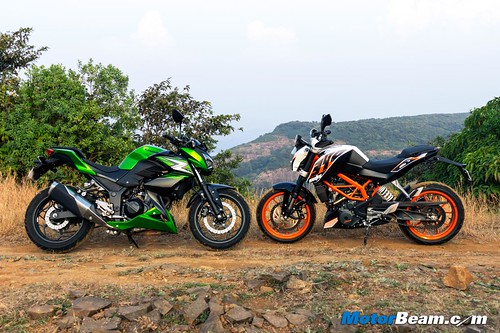 Ergonomics – Both bikes are street-fighters so both have a wide handlebar and upright seating position. The Z250’s seating is a bit more sporty and thus much less tiring than the very straight seating on the Duke 390. The footpeg placement on both bikes is rear-set but the Duke 390’s is a bit unusual. The seat on the 390 is hard while the Z250’s is more comfortable with the right firmness. If you are looking to ride with a pillion, the Kawasaki bike is the better choice as your co-passenger is more comfortable on the Z250. However there are no grab rails on the Kwacker, instead it has under-seat recesses which isn’t as easy to hold. With more seating comfort and bungee hooks for luggage, the Z250 can also double up as a touring machine, unlike the Duke 390. 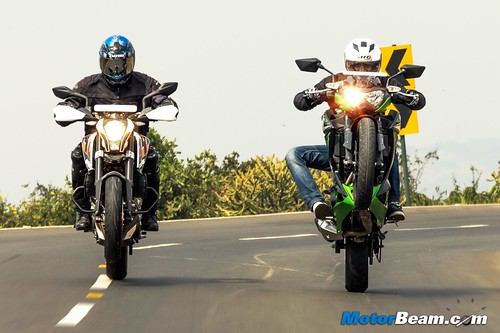 Performance – One of the reasons for the big price difference between both these bikes is the engine. The KTM Duke 390 uses a single-cylinder motor while the Kawasaki Z250 has a parallel-twin on board. While the Kwacker is a 249cc unit, the KTM displaces more capacity at 373.2cc, resulting in the Austrian machine having much more output. The Duke 390 belts out 44 PS against the Z250’s 32 PS, it also offers more torque output of 35 Nm against the Kawasaki’s 21 Nm. That’s not all, the Duke weighs a good 14 kgs less and when you factor in all that, it’s no surprise that the 390 is a whooping 2.7 seconds faster to the ton, it also has a higher top speed but only marginally. 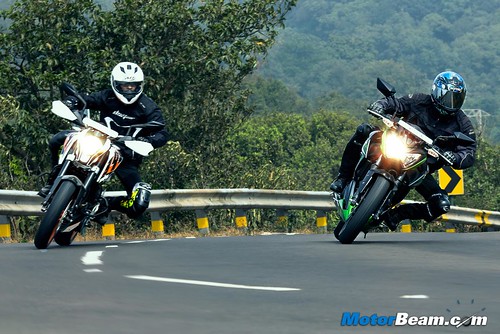 So how do these bikes fare in a drag race? The Duke 390 takes off right from the start, pulling away constantly from the Z250 with the Kawasaki simply not being able to keep the KTM in sight. In the first 100 metres itself, the Duke has made a large advantage and by the time you reach the 200 metre mark, the 390 is far ahead of the Kawasaki. The problem is, since both bikes are naked street-fighters, there is absolutely no aerodynamic advantage for either so wind resistance doesn’t play a part here. With so much more punch from its Nikasil coated cylinder, the 390 Duke wins by a big margin in a quarter-mile drag race although the Kawasaki’s top-end centric motor does give the losing rider some respite (with the fun of redlining in each gear). 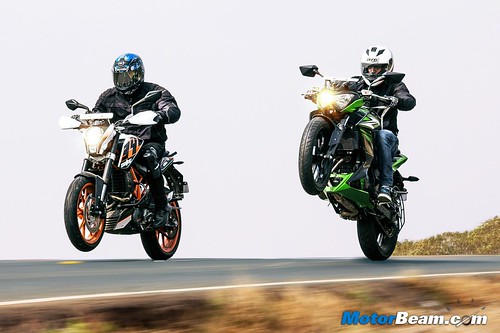 In a quarter-mile drag race, the Duke 390 just leaves the Z250 for dead right from the start

So the Duke 390 feels very fast and when you switch to the Kawasaki Z250, you just feel the bike isn’t moving. That’s largely because power is concentrated at the top-end, you need to rev the nuts out of the Kwacker. The Duke on the other hand has a very strong mid-range and action starts at 5000 RPM itself, although redline comes in early at 10,500 RPM, against the Z250’s 13,000 RPM limiter. Peak power on the 390 comes in at 9500 RPM while the Kawasaki’s peak power is achieved at 11,000 RPM. Similarly peak torque on the Duke 390 comes in at 7000 RPM, the Kawasaki reaching its peak twisting force at 9000 RPM. Thus the Duke 390 shows much more urgency right from get go, making the KTM a true revelation as it’s so much faster than the Z250 that the Kawasaki simply isn’t a match. 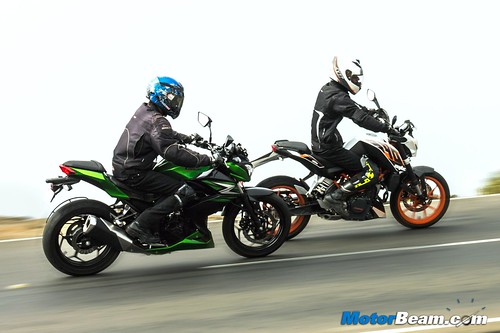 Acceleration aside, the Z250 is way more refined and sounds extremely sweet too

There is however more than acceleration numbers between these bikes because the Kawasaki Z250 is more at home in the city. One can ride in third gear where the Duke 390 will necessitate you to be in first gear! There is absolutely no knocking on the green machine while the KTM knocks a lot if you go into a higher gear. The Kawasaki is the better city bike because it doesn’t burn your thighs even in stop-go traffic which the KTM manages to do. Both bikes are very tall geared but with the wider powerband on the Kawasaki, it does 61 km/hr in first (against the Duke’s 56 km/hr), 88 km/hr in second (the 390 does 82 km/hr) and 112 km/hr in third (105 km/hr on the KTM). Fourth onwards, the KTM’s tall gearing continues while the Kawasaki goes a bit short, the Duke 390 doing 135 km/hr in fourth (Z250 does 132 km/hr) and 156 km/hr in fifth (152 km/hr on the Kawasaki). 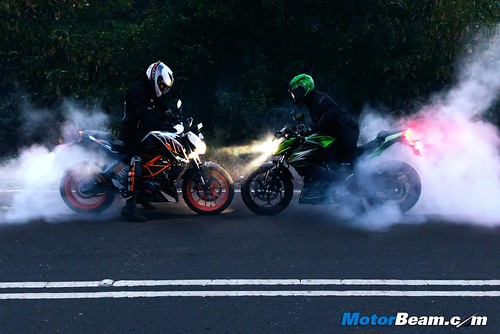 The Kawasaki Z250 beats the KTM Duke 390 when it comes to sound, the exhaust note of the parallel-twin is very addictive and music to the ears while the KTM sounds far from what it should for such a fast bike. Even the gearbox and clutch feel on the Kawasaki is better, the Z250 having better quality levers as well (the levers on the Duke 390 are nothing short of rubbish). You will always find the right gear on the Kwacker while there are false neutrals on the 390 at times. Further impressing is the 17-litre fuel tank on the Z250 which offers 6-litres more tank capacity than the KTM, resulting in a tank range of 500 kms on one tank, the Duke 390 managing only 220 kms. Yes, that’s right, the Kawasaki is more frugal (it also has an ECO mode indicator), returning 30 km/l against the Duke’s 26 km/l. 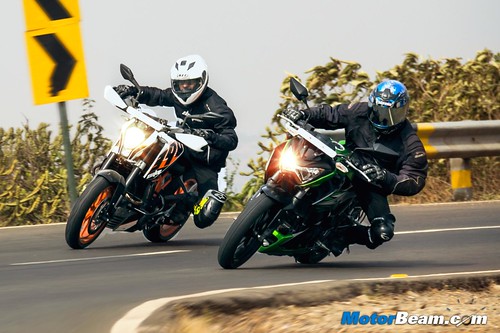 Riding Dynamics – KTM has the best bit of hardware on the Duke 390, the frame being a Trellis against the Kawasaki’s semi-double cradle. That’s not all, while both bikes use a rear monoshock, the KTM has upside down front forks against the Z250’s conventional telescopic forks; and the Duke uses an aluminium swingarm while the Kawasaki uses a box section! With a lighter weight, quicker steering and shorter wheelbase, the Duke 390 is the sharper bike of the two, having much grippier Metzeler tyres (the Kawasaki uses sub-par IRCs). The KTM is easier to ride, in spite of being more powerful and the lightness has a big part to play in that. Not that the Z250 is any bad when it comes to handling, the KTM is just better although the seating position on the Kawasaki inspires more confidence to corner hard. 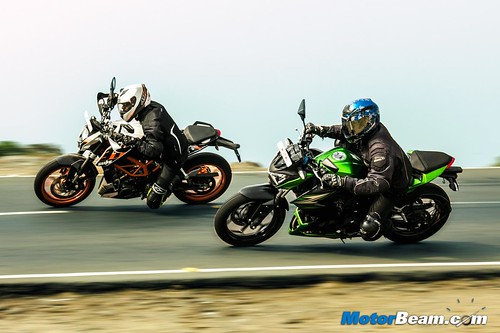 The KTM is stiffer which plays a part in its sharpness but that also works against it when it comes to ride quality. While the 390 Duke is stiff and far from compliant, the Z250 just soaks up the bumps with a lot of maturity. Bad roads don’t unsettle the Kawasaki like they unsettle the KTM. Riders on both bikes will face heavy windblast at speed but the Duke 390 is the more stable motorcycle at high speeds. When it comes to braking, the feel offered by Kawasaki is very good but the Duke 390’s grippier rubber and standard ABS make it stop with more confidence. 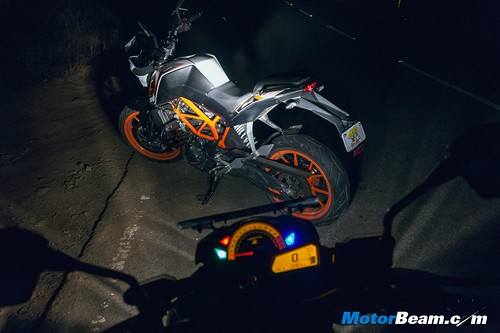 Verdict – The KTM Duke 390 and Kawasaki Z250 are two street-fighter machines which have little in common. There is little doubt that the Duke 390 is faster and more fun while the Kawasaki Z250 has better quality and superior engineering. However, the KTM is the better bike for several reasons. Faster, sharper, more loaded, better hardware and terrific value for money help the KTM Duke 390 emerge on top of the Kawasaki Z250 in this shootout. While the Kwacker does offer comfort, quality and a high revving engine, the price premium simply doesn’t justify buying it over the Katoom. That’s the reason in our recent poll, 58% MotorBeam readers chose the Duke 390 over the 42% who voted for the Kawasaki Z250, clearly the KTM is still a difficult bike to beat for the sheer value it offers.

The KTM Duke 390 is not only cheaper to buy and service, it’s also more fun and comes with better hardware and more equipment. If you want comfort and quality, the Kawasaki Z250 is the better machine but if you are paying that much, it’s better to opt for the slightly more expensive Ninja 300. 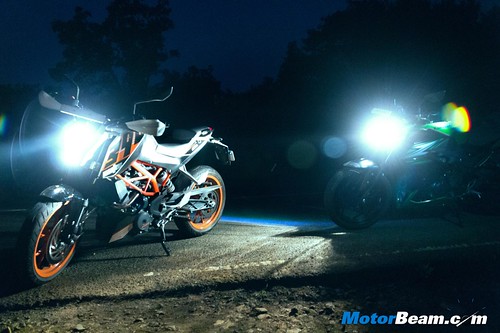 Want comfort and can spend, then the Z250, else the Duke 390 is the better package