KTM Duke 125 Test Ride Review – Is The Baby KTM Worth It?

So the news of the KTM Duke 125 struck as soon as Diwali ended. Literally, everyone was talking about the baby Duke getting an even smaller engine. And within a few weeks, KTM India announced the Duke 125 and within no time it reached the showrooms as well. We did a quick video on how it felt and it made us greedy enough to have a test ride. But then, KTM India sent us an invite to the Chakan test track for a first ride experience. What better place to ride the mad Duke than a test track! I was quite familiar with the track, I knew I was gonna have fun with the newest baby Duke. 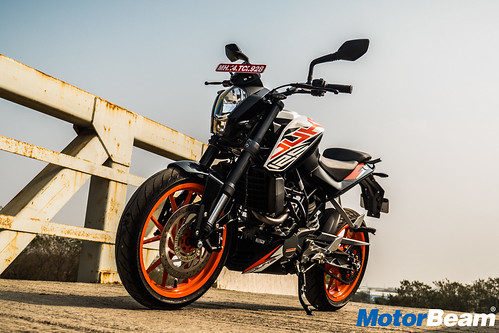 Looks similar to the Duke 200 with newer graphics all over

Styling – The KTM Duke 125 looks identical to the Duke 200. If you park both the bikes next to each other, without the stickers it would be very difficult to differentiate. However, the Duke 125 gets a fresher livery and has 125 written all over. The headlight cover is black in all the variants and the colour options are White, Orange and Black. It gets the same orange wheels and trellis frame from the Duke 200. A noticeable difference is that the trellis frame is black and the engine head and the exhaust pipe are thinner. Even after being a 125, this KTM looks like a bigger Duke. It does grab quite some attention just like its siblings. 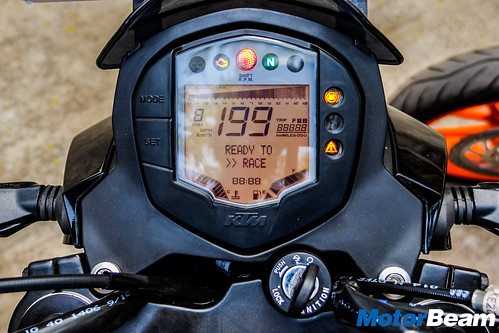 Instrument Cluster and Switchgear – The KTM Duke 125 gets the same instrument cluster we had seen 6 years back on the Duke 200. The tachometer isn’t clearly visible but the console is loaded with a lot of information. It shows distance to empty, mileage, twin trip meters, odometer, gear position indicator, engine temperature, fuel gauge and a clock while it also gets a shift light. Although the meter feels dated, it still goes well with the bike. The Duke 125 also gets the same backlight switches from the Duke 200. The switchgear has a piano black finish and the fit & finish levels are quite good.

News highlights of the day include TVS, Mercedes-Benz, Land Rover and Ather. TVS - The Indian bike maker has teased the new TVS Star City Plus   END_OF_DOCUMENT_TOKEN_TO_BE_REPLACED

The Mahindra XUV300 has scored an impressive 5-star rating in the latest crash test results. Catch All The Latest Videos, Subscribe To   END_OF_DOCUMENT_TOKEN_TO_BE_REPLACED

Hyundai Aura launched with three BS6 compliant engine options. Hyundai Xcent's successor based on the Grand i10 NIOS, Hyundai Aura has been   END_OF_DOCUMENT_TOKEN_TO_BE_REPLACED