KTM Duke 125 Test Ride Review – Is The Baby KTM Worth It? 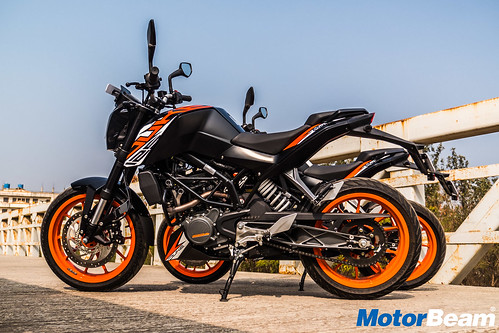 Ergonomics – The ergonomics of the KTM Duke 125 are exactly same as the Duke 200 and the older Duke 390. The difference, however, is that the seat has better cushioning than that on the other Dukes. The seat height is also 8 mm taller at 818 mm. This makes it a little difficult to get on if the rider is short but then the footpegs are slightly rear-set which again isn’t that comfortable. Seating posture is upright and that combined with the pegs and the seat makes the riding posture very unique, doable but not for all. The rear-view mirrors are the same and don’t offer great visibility if the rider is wearing a jacket. Pillion comfort isn’t much either and there is very little room to move around. 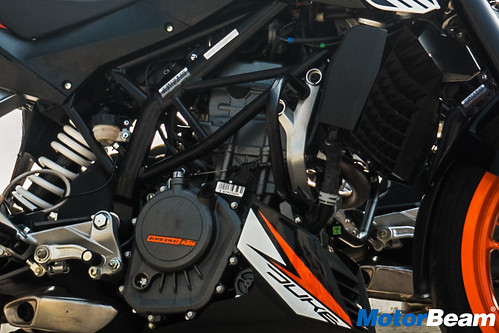 Performance – The KTM Duke 125 is powered by a 124.7cc engine and this motor is a smaller bore unit of the Duke 200’s powerplant. It produces 14.3 BHP of power and 12 Nm of torque at the higher end of the rev band. This makes it responsive only in the top-end while it does not rev as quickly as the Duke 200 does. The motor redlines at 10,000 RPM and the throttle response is decent enough in the mid-range while it lacks in the low-end. However, there is enough grunt to stutter around without much fuss. It reached 100 km/hr within 17 seconds but goes out of breath as soon as you hit 110 km/hr. With a long stretch of road, one can push it to 115 km/hr which is its top speed. 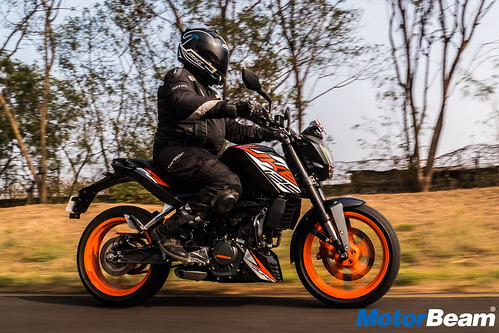 The engine feels very refined compared to other KTMs

The Duke 125 has a mellow exhaust note, slightly different from its siblings

The Duke 125 gets a 6-speed gearbox and the gearshifts are very crisp while the clutch is light. All the gears aren’t tall and one will have to keep shifting to keep the pace going. However, you can ride at 60 km/hr or push it to its top speed in the 6th gear itself. The smaller bore has resulted in a lot refinement from the engine. We could feel the vibrations kicking in only when the motor neared the redline, that too was just a buzz on the footpegs and the tank. NVH levels are very well contained and the Duke 125 gets a mellow exhaust note. Unlike its siblings, it does not heat as much either. 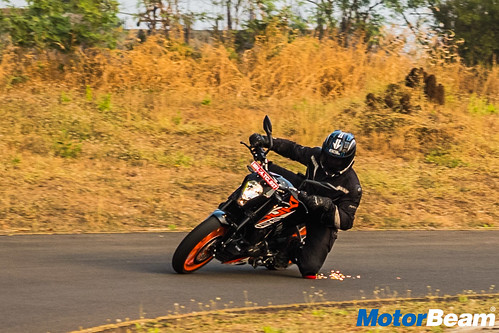 The KTM Duke 125 tips into corners like a gem

Riding Dynamics – The KTM Duke 125 rides and handles just like the Duke 200 because it gets the same suspension setup, the same set of tyres and retains the exact same weight. The tyres grip well and the suspension setup being stiff makes it very feedback rich. Tipping it into corners is a piece of cake and the feedback from the handlebars is very engaging. It gets the same braking setup and also gets a single-channel ABS. This makes the braking feedback better and the Duke 125 feels surefooted while the ABS isn’t switchable. The only gripe is that the seat height is slightly more than both the Duke 200 and the older Duke 390. The addition to the seat height is a result of better cushioning on the seat making the Duke 125 quite comfortable to sit and ride on.

Royal Enfield is on a product offensive for next 3-4 years. New Royal Enfield model to launch every quarter. Yes you heard that right. The   END_OF_DOCUMENT_TOKEN_TO_BE_REPLACED