KTM Duke 390 vs Yamaha RD350, you read it first on MotorBeam. It’s not every day when milestones occur and you are there, in that particular era to witness it. It’s a privilege, which very few witness. The two machines we have here today belong to different times. Both the KTM Duke 390 and Yamaha RD350 came and conquered hearts instantly. They are not here for a face off or to prove anything. It’s the parallels which they share, reunites them. Just like two friends meeting after almost three decades, sharing a laugh over the same jokes, which they cracked in their childhood. 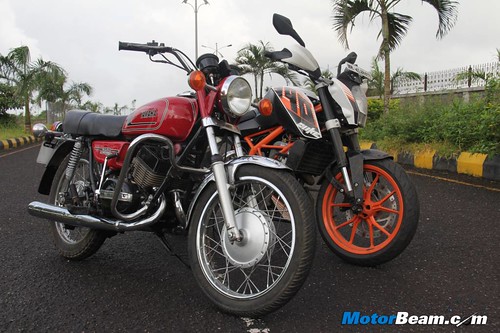 Ladies and gentlemen, on the left side of the corner from the land of the rising sun is the iconic speed king, the dragon from Japan who spits blue smoke rather than fire, ever since the 1980’s, the Yamaha RD350! On the right corner, we have the finest finesse from ‘eastern kingdom’ painted in loud orange, it comes from, where music is more important than food, the Mattighofen growler, the sprinter, the KTM Duke 390, the new generation speed king, a modern interpretation of the icon which left us with no other choice than up till now.

Enough has been said about both these motorcycles. The Yamaha RD350 has still been in the talks after its launch in the late 1980’s because there was not a single machine, which matched the sheer symphony and bliss of what the Yamaha RD350 provided. Shocking part is that all this happened when most of us were in diapers. The KTM Duke 390 on the other hand, well, ever since it was a concept, it has been a celebration with goose bumps rather than balloons. The feel of the Duke 200 and specifications of the Duke 390 combined such a fury that impatient enthusiasts just could not wait to get their hands on this machine. 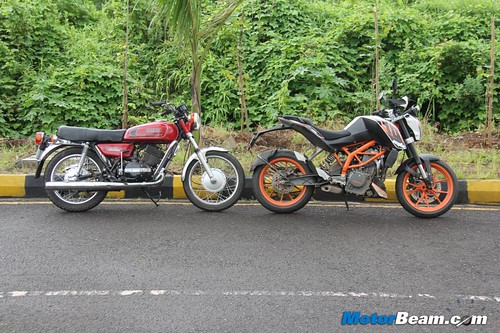 The Yamaha RD350 looks like a thorough classic. It is best described in two words, chrome everywhere. The handlebars, the gleaming exhaust pipes, front fender and plain yet beautiful touch to the side panels and no nonsense fuel tank and round headlight are the real highlights on the RD350. The low stance and wide and long seat give it thorough classic feel. The Duke 390 is a modern playboy. Wearing hooligan loud colours and sleek machined body parts make it undoubtedly resemble its elder siblings.

Let us get a bit logical now. When you compare these two machines, there is a subtle amount of differences. The 373cc Duke 390 is a single-cylinder unit producing 43 BHP of power, weighing 154 kgs and sprint from 0-100 km/hr in 5.8 seconds. The Yamaha RD350 is a legend for a reason. Each one of the two-cylinders displace around 173.5cc, which when you observe are today’s workhorses, for an example a 180cc motorcycle. The parallel twin unit and this particular model, the LT, produces 28 BHP of power and weighs little over 140 kgs. This means, complete riding nirvana, 0-100 km/hr comes in under 8 seconds. 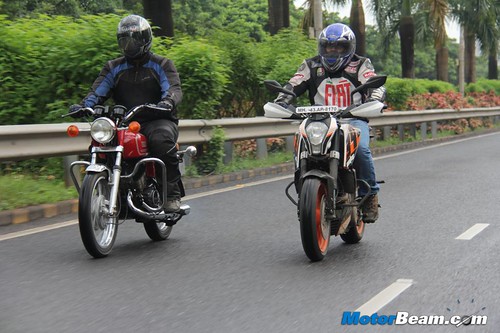 The Yamaha RD350 is slower than the KTM Duke 390 which it has to be, considering the time frame and better numbers in every aspect like horse power, torque and a bit more displacement. However, if this RD350 had been the Japanese spec model, which came with 41 BHP, it would have been tough, really tough for the Duke 390 to match. Kick start the engine and it comes to life with a loud soundtrack. Sounds like some creatures in the engine sacrificed their lives to bring the motor to life. Give it some revs and pop the clutch and the front is lively and wants to touch the sky. Open the throttle and it will scare the hell out of you at first.

If you are a rider who tames his machine in the same fearsome way the machines scares you, then you can tame the RD350 in few runs. The gearbox is like any other Yamaha. Yamaha two-stroke motorcycles which we have ridden till date still have reasonably slick shifting capabilities and to our surprise this was no exception either. For a 25-year-old motorcycle, it still is reasonably slick. The parallel-twin engine provides great flexibility. The motor feels immensely tractable for a stock motor and drivability is good too. When it comes to motorcycles, it is all about power to weight ratio, on paper at least. What the Yamaha RD350 gives is truly unmatched, the lovely, busy bee, crackling feeling from the engine, the relentless, reckless redlining nature that it has and then it’s the motorcycle, which keeps provoking the rider to do so and it is all part of the lunatic riding experience.

The ride in typical Yamaha fashion was stiff, does not crash and is not harsh, perfectly tuned. Finally, it’s the way it disappears, forming a cloud of smoke, generating a biblically loud engine note and it’s gone! Makes you feel, black magic does exist. The RD350 we had with us was in pristine condition inside out. All suspension and panels were original, the engine was rebuilt with new pistons, rings, and other bits found in the block. The owner is extremely proud and loves his vintage bike collection. 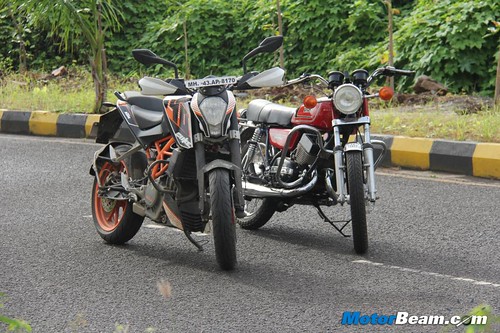 The KTM is the new kid on the block but it has done its homework very well. Given the pedigree of lightness and hooliganism, it delivers so much power and carries minimum weight with it, hence the biblical performance numbers and jaw dropping riding experience. The Duke 390 is reminiscent of the two-stroke family. The power band, the frantic performance and the buzzyness is all undoubtedly two-stroke, in terms of feel. A small common phenomenon of both these machines is, that they need some serious revs to be dialled before you pop the clutch. After riding them back to back, we felt just at home. Splendid brakes and chassis and immensely agile dynamics makes it more fun to rode. Given the fact, we call it the modern day interpretation is because it comes with all the luxuries, which the RD350 does not possess (it’s not its fault) hence it’s the definitive performance motorcycle of the current era. 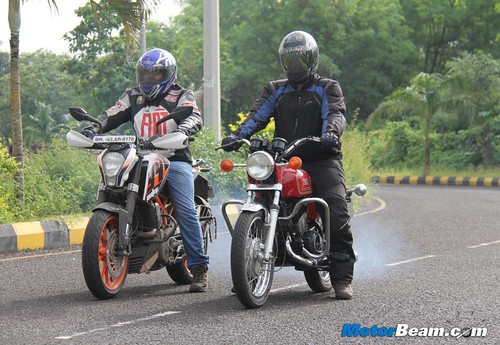 Bigger part of the lunacy is aided by lightness, which these motorcycles posses. Given the fact that twin-cylinder engines are always lighter than single-cylinder units, this does not mean the Duke 390 is heavier. KTM has achieved a feat with the engine. The engine weighs just 36 kgs. The lightness comes in from the light Trellis frame and aluminium swing arm. KTM has a lot more features than the Yamaha RD350 too. Bigger brakes and proper wheels and tyres. In short, both these motorcycles are lightweight in their own way. Meanwhile, the RD350 comes with spoke wheels and tyres that you see on entry-level motorcycles, which are slapped onto 18-inch wheels. The only weak point to the RD350 is the brakes. Drums at both ends sound crazy in the first place, imagine on the road doing 120 km/hr and you need good stopping power, which isn’t the RD’s forte. 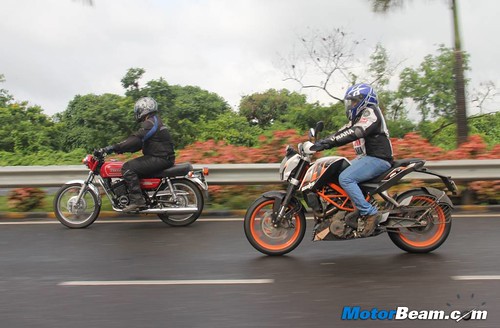 All right, there are lot of RDs which have been modified with disc brakes at the front and international versions did come with discs which India didn’t get due to Indian mentality in those days (and still is) that disc brakes are killers. Killing reminds us that the motorcycle was named RD by Yamaha as their road going two=strokes but people named it as Racers Delight and mostly commonly Rapid Death. All this is true after all, any motorcycle with 30 BHP and 209 BHP per tonne with drum brakes and puny tyres will be baptised as a suicide machine for sure. It’s not a surprise, going back in time will tell you that after all Japanese are the one’s who invented the concept of Kamikaze. 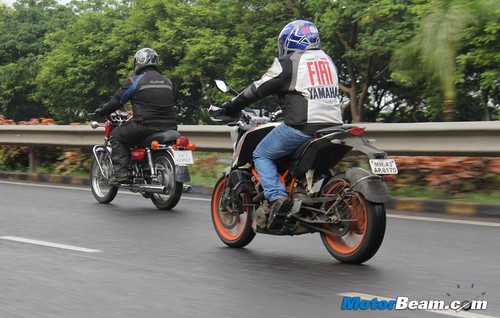 By now you might have understood that the Yamaha RD350 is truly an icon and what Yamaha made 30 years ago, finally gets an answer today. Yamaha proved in the present too that it can set benchmarks in segments and the company is known to create segments too. Be it the spectacular FZ series of motorcycles or the superlative flagship R15. We would love to take this opportunity and ring the bell at Yamaha’s door and tell them it’s high time to give what we need (an RD replacement), enough said. 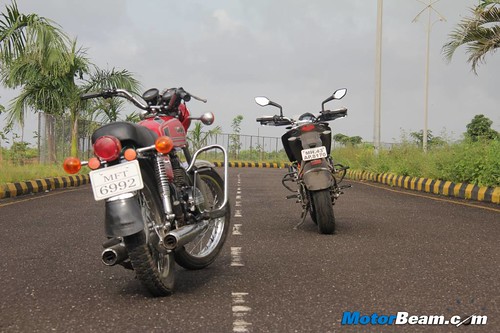 Anyways, ever since we rode the KTM Duke 390, it was very clear that it was evocative of the RD350 on how the motorcycle becomes berserk after 5000 RPM and how quickly it reaches the horizon. For us it has been a magnificent day riding these beauties back to back, for a short time, but every minute was special. The Yamaha RD350 then still represents what two-stroke performance machines are, but frankly, they are dead thanks to all sorts of misgivings. After all, what modern interpretations are here for? The Duke 390 fills in the shoes marvellously and gives us the thrills of the machine we aspired for years with all the luxuries which are required for daily practicality in our time. There is a saying “two-strokes are crazy and four-strokes are lazy” but here and now, with the Duke 390, it’s not the case anymore, not at all. The king is dead, long live the king, the RD350. 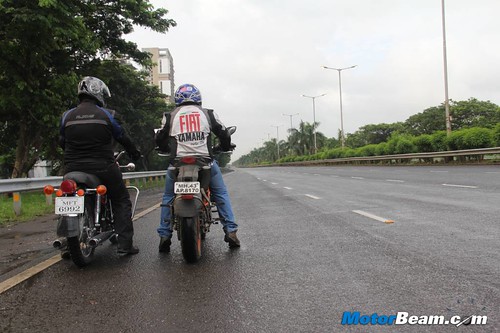 KTM 390 Duke To Be Offered With ABS