Whattttt? Is that what you are thinking? How does a made in India motorcycle with heavy local content battle it out with a locally assembled model which costs more than a Kawasaki Ninja H2? For the price of one MINI Cooper 5-Door, one can get almost 20 units of the KTM RC 390. But there is some method to this madness. Firstly, both these vehicles do have something in common, both are European and both are aimed at those who love to pilot their machine, aka handling is their forte. Secondly, both are adopted, the British machine now being under control of Germany’s BMW while the orange machine is made by India’s own Bajaj Auto. Thirdly, today is ‘World Motorcycle Day’, what better way to celebrate it then to do something weird and out of the blue. So while this shootout isn’t about winning or losing, it sure is a car vs bike battle.

Motor Quest: KTM launched the RC 390 in 2014 while the third generation MINI was launched in the same year too. The RC 390 comes in only one variant and one colour while the MINI Cooper is offered in multiple variants with a range of colours, the paint-job can also be customised. 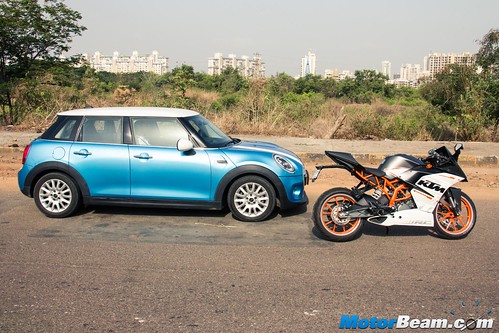 Dimensions aside, the MINI Cooper is actually quite a compact car

Styling – If there is a car which can immediately turn your attention then it has to be a MINI. While the MINI might be stupendously expensive for what is just a hatchback, it is still the cheapest way to turn heads on four wheels. What really works in the MINI’s favour is the retro looks which combined with the rare sightings on Indian roads, and boy you have got a recipe for attention. If you think of it, there isn’t anything spectacular about the MINI’s design per se, a Fiat 500 looks much better to us but MINI does execute some cool paint shades with the stripes and different coloured roof adding to the sporty appeal. 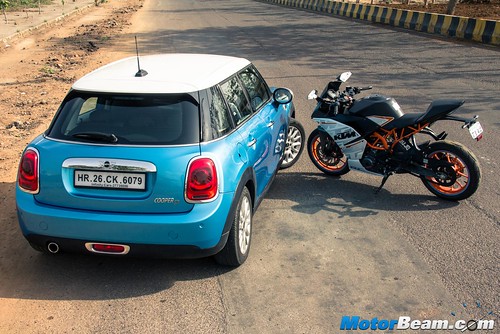 The MINI invites eye-pops, the KTM is too quick for all that

The attention to detail in design is truly outstanding

The KTM RC 390 on the other hand is an evil looking bike, it screams its intention of decimating everyone at the traffic lights with its open mouth and sharp looking eyes (twin projectors). What really adds to the visuals of the Austrian machine are the orange finishing on the wheels and frame. This ideology of not carrying just one colour throughout is what is common between the KTM RC 390 and MINI Cooper. But which one turns more attention on the road? It’s the MINI, people turn to see the MINI more than they notice the KTM. Maybe it’s because the RC 390 is a common sight on our roads. Or maybe they like the ‘Italian Job’ better. 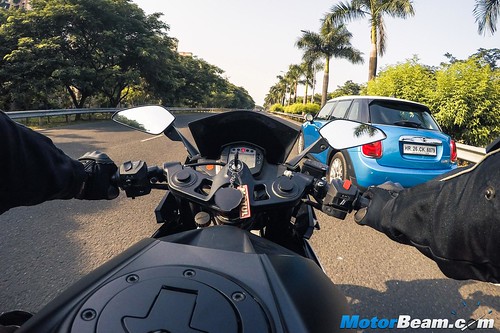 The RC 390’s console is super loaded, here it is telling us to upshift

Instrument Cluster and Switchgear – Before the KTM can show off the amount of data it carries on its console, the MINI proudly flaunts its heads-up display. But where the Cooper uses a lot of analogue on its cluster, the RC 390 comes ahead and proudly boasts of its all digital unit. Sure the Race Competition machine has more data on offer but the British machine isn’t much behind. The RC gets backlit switches, the Cooper comes with uber cool aircraft inspired toggle switches, a win-win in both. 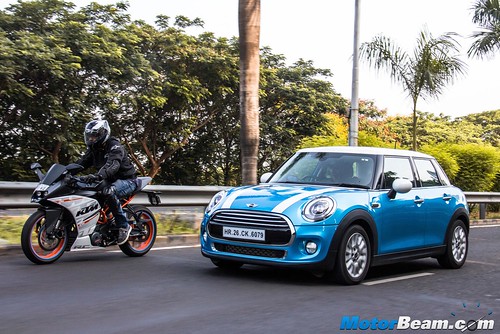 Ergonomics – On one side, you are in a car, so you sit on a seat which offers utmost comfort, the steering can be adjusted, the seat can be moved forward or back as per one’s need and the weather can be controlled. Meanwhile, on the bike, things are the exact opposite. You adjust according to the handlebar position and the seat height. In the case of the RC 390, one does sit leaned in and that takes a toll on the wrists during long rides. So if comfort is your thing, maybe the MINI is the right choice but don’t judge the KTM just yet. 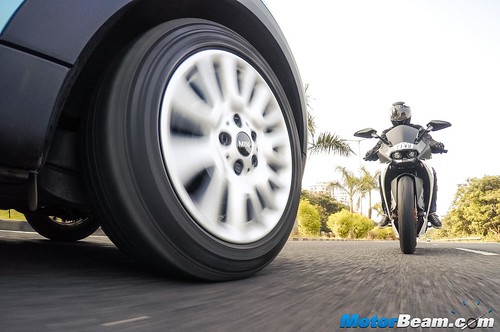 Difficult to take such pictures because the RC 390 is gone in 5.6 seconds

Performance – The KTM comes with just one riding mode and that’s default, no buttons to press, nothing to do, just hit the starter button and fly. The MINI Cooper comes with multiple driving modes (Sport which flashes the text ‘Maximum Go-Kart feel’ while Green mode is eco time) but before you decide what you want to do on the iDrive inspired controller, the RC 390 is away and you see a blur from the MINI because the 373.2cc engine outputs a massive 43.5 PS and 35 Nm. While these numbers might not look wow in front of the MINI which develops 114 horses in diesel guise and 189 horses in its Cooper S avatar, the bike weighs peanuts in comparison. 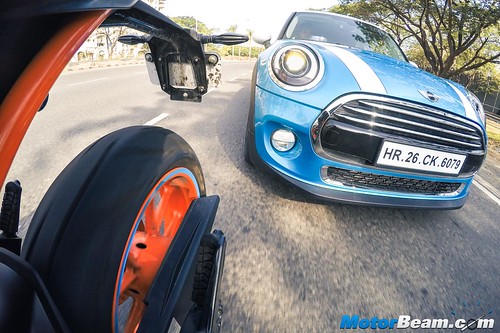 The RC 390 has an insane power to weight ratio, thanks to it tipping the scales at just 166 kgs which makes it a 1000 kgs lighter than the car. But to be fair, the 4-wheeled machine can carry 5 people (2 in comfort and 3 others forcefully) with some of their luggage. It also has an audio system, AC, multiple airbags and a ton of creature comfort, none of that matter to the biker though because on the RC 390, it’s just the rider, machine and the road. With a 0-100 km/hr time of 5.6 seconds, even the fastest Cooper in the MINI India line-up can’t dream of keeping up as the 2.0-litre, 4-pot mill enables the Brit vehicle to do the ton in a rather slouchy 6.7 seconds. But in terms of top speed, the MINI’s displacement advantage makes it much faster with a top whack of 230 km/hr. In fact, the Cooper S is faster than the RC 390 post 140 km/hr as windblast is naturally not a concern in the closed vehicle. 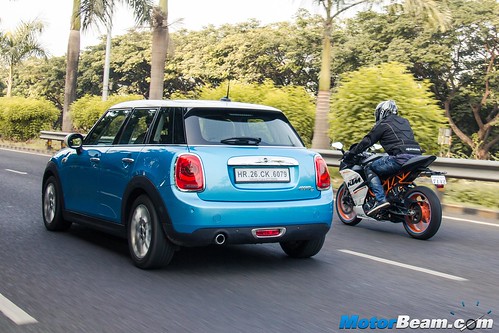 When one talks about the diesel, the 1.5-litre oil burner has something in common with the KTM as both the engines are unbalanced, the RC 390 using a single-cylinder while the MINI employing a triple. It does the 0-100 km/hr sprint in 9.8 seconds and the RC 390 proudly claims that its younger sibling is half a second faster. Refinement levels in the car are like a zillion times better and while motorcycles are more frugal, the running cost of both the Cooper D and RC 390 are on par, largely due to petrol being more expensive. The RC 390 will make you stop more often at the pump (every 200 kms) while the Cooper D can go an astonishing 700 kms on a single tank. If city commuting is your thing, ditch the KTM right away before it overheats and ditches you. The RC 390 is more vocal but the Cooper S is more music to the ears. Both have good gear shift quality from their 6-speed gearbox but the bike offers more feel as it’s a manual and if you pop the clutch a wee bit early with the throttle pinned, you also get to smile at the clouds. 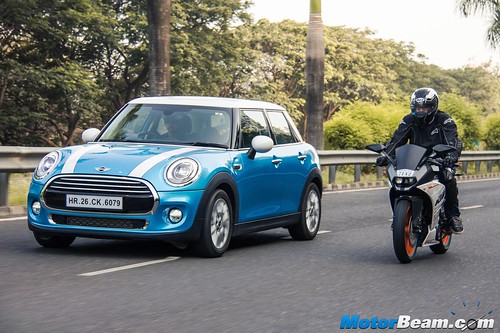 Dynamics – The KTM RC 390 has top hardware and for its price, it puts even bikes costing thrice as much to shame. The MINI has something up its sleeve too because it has the wheels at the extreme corner and that gives it the go-kart feel. The Cooper has brilliant handling and just jinks into corners like it is on rails but the RC 390 is no different as it takes to the twisties with the same zest. Both offer a ton of feel and feedback is tremendous from the steering too. But the brakes on the MINI are just better, the KTM feels a bit wooden but both have ABS as standard. 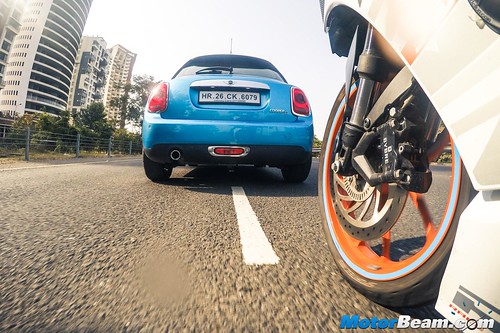 Grip levels on both these vehicles is insanely high, stability is just excellent

MINI or KTM, these two vehicles do know how to corner real hard & fast

With both the vehicles being stiffly sprung, ride quality isn’t either vehicles forte but yes the Cooper is more pliant than the harsh KTM. It will be hard to choose one in the stability department as both these machines are glued to the tarmac at speed. But what offers more fun to a new rider/driver? It has to be the KTM because the way the engine responds along with the super quick clip-ons, make the RC 390 super addictive and while the MINI is bloody good, it just isn’t such a racket like the trellis-frame equipped machine. 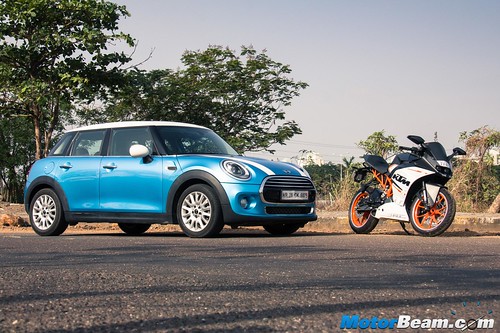 The MINI Cooper is expensive but unique, the RC 390 is affordable yet insanely fast

Verdict – This isn’t as direct a comparison as we are used to doing on MotorBeam. When I started to write this shootout, there were a few things in common but as I reach down to conclude, there are more things in common between the MINI Cooper and KTM RC 390 then I thought. Both are high quality vehicles which are super fun, turn heads and don’t care two hoots about comfort. These are for people who want to take to the wheel or handle. In this regard, if you are a car guy, get a MINI Cooper, you won’t be happier around valley roads. If you are a bike guy, you don’t care much about cars anyways and the KTM RC 390 is the most affordable way of feeling MotoGP every time you ride it.

While the MINI Cooper has always been a fantastic vehicle, it’s the KTM RC 390 which being much cheaper shows how local manufacturing and souring can help bikers have all the thrills at so much less of a cost. 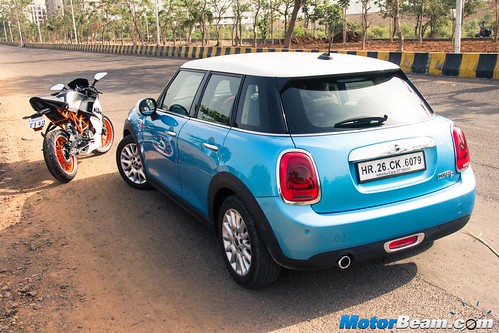 “Driving a MINI turns quickly from having fun to turning envy because people get bothered a lot and continuously gawk at you. With no tints allowed anymore, if you like to be in the limelight, the Cooper excels but I would rather hide under the visor and grin all day long on the KTM RC 390. If I had the money to buy a MINI Cooper, I would rather spend that on a Ducati Panigale 1299 or maybe get a few motorcycles.” – Faisal Khan, Editor, MotorBeam.
“Being a car guy, it’s a no brainer for me, the MINI Cooper S is what I like more. The KTM sure is fast and fun but not a practical motorcycle. Let me race a RC 390 in the city and I won’t go above a speed of 40 km/hr but the orange machine will shut down repeatedly due to heat, muhahaha (the evil laugh).” – Javeid Khan, Deputy Editor, MotorBeam.
“I was super excited to drive the MINI Cooper. It looks so cool but somehow doesn’t drive as cool as it appears. Maybe I am too much into bikes, maybe I can’t see more than two wheels or maybe I am blown away more when I feel the speed by not looking at the speedometer but by feeling the wind on my chest. Maybe I am just ready to race.” – Dhanil Vira, Road Tester, MotorBeam. 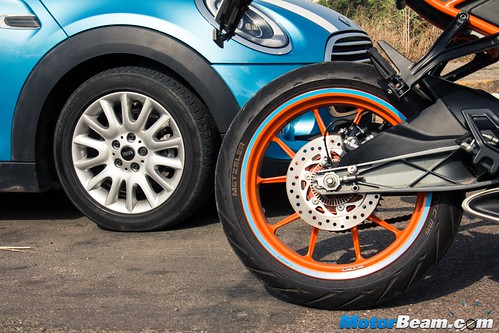 MY16 KTM RC 390 With Side Mounted Exhaust Spied