The C-segment is one such segment where options for buyers is plenty but only a handful of cars manage to please a majority of buyers. The Honda City, which is called the king of its class since long, has given the top step away to the Maruti Ciaz. Yes, it might sound shocking but Maruti sold 5162 units of the Ciaz last month while Honda only managed to sell 4317 units. Customers have been shifting from Honda to Maruti but what’s making the Ciaz so popular? The car is part of our long term fleet and we have just got the answer. 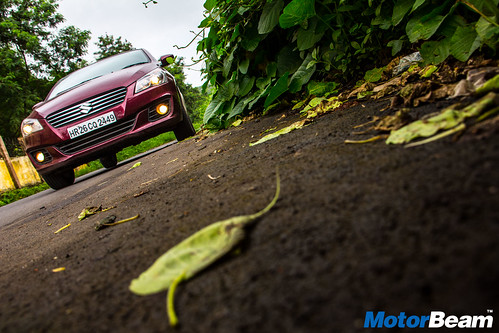 Indians have an obsession for sedans and SUVs, that is why we have compact versions of both. The Maruti Ciaz benefits from generous dimensions, being longer and wider than the Honda City, it certainly does have presence on the road although the design is conservative. Our test car isn’t the sporty RS variant but the dark finish on the alloy wheels surely looks good. The top-end ZDi+ trim is loaded with projector headlights, keyless go, push button start and one of the best infotainment systems in the segment. 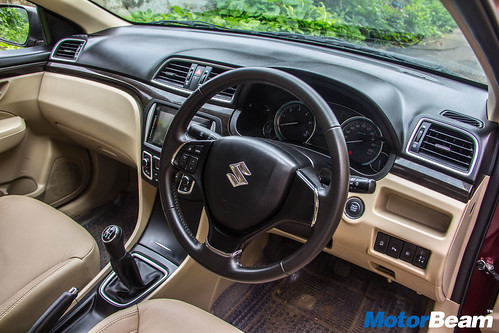 The dual-tone interior has good quality, no rattles on our long termer

The Bluetooth system connects flawlessly and the touch is slick and very responsive. The only gripe I have is the Bluetooth audio connection (when the steering mounted controls aren’t used) needs a few buttons to be pressed, there should have been a quicker way to switch from FM to Bluetooth. Also the lack of Apple CarPlay is a bit surprising as Maruti’s cheaper cars have it! The dashboard has the usual Suzuki bits which we all are so accustomed to by now with quality levels being good. The dual-tone treatment gives an airy feel but the cabin itself is huge with a ton of space for both front and rear occupants. Thanks to the long wheelbase, the Ciaz makes for a very good chauffeur driven car. There is plenty of storage bins too and all this makes this Suzuki sedan a very practical vehicle. 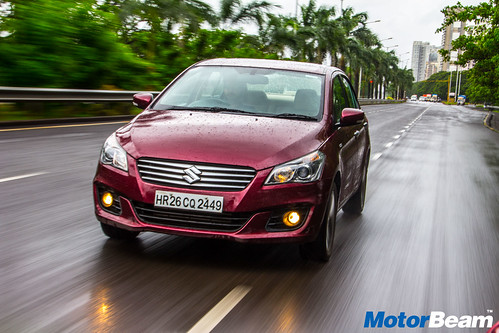 The 1.3-litre DDiS diesel engine does punch above its weight

The big USP of the Maruti Ciaz is the SHVS tech that is offered on the diesel model. When you look at output numbers alone, the 1.3-litre DDiS mill’s 90 PS and 200 Nm might not look impressive for a C-segment sedan as big as the Ciaz’ but lighter materials means it still weighs less than the Honda City. There is some lag when you get going but the mid-range is strong and the motor will pull to 5300 RPM which is quite impressive for a diesel powerplant. 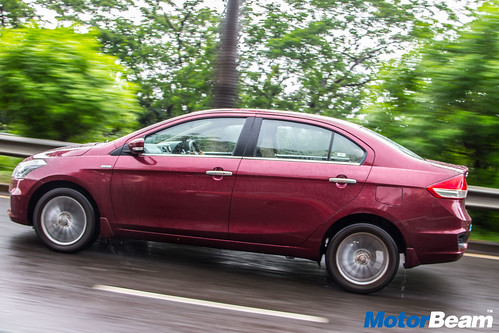 When driving in the city, the Maruti Ciaz has good enough grunt to amble around town while out on the highway, you do need to keep the motor on the boil for quick overtakes. But this isn’t a car you would want to drive fast but rather take it easy and when you do, the vehicle rewards you with stunning fuel efficiency. ARAI rates the mileage at 28.09 km/l which is the segment best but in the real world, it does return 19 km/l with a mix of city and highway driving. City driving alone has resulted in us seeing a constant 18 km/l while out on the highway, the number has swelled to 20 km/l. 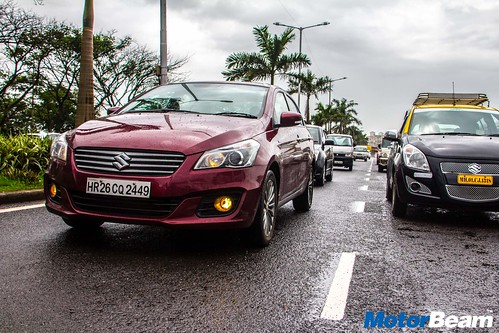 SHVS tech makes the Ciaz stand out against its rivals

When driving under 80 km/hr and not accelerating, the SHVS light blinks on the cluster, there is also a gear shift indicator to help with efficient driving. Come to a halt and the car switches off instantly and turns back on when you get on the clutch. The mild-hybrid system sure works in swelling the mileage of the Ciaz. The next most impressive thing about this Maruti is the ride quality. It rides beautifully and absorbs everything in its stride without a hiccup, this is indeed a comfortable car to travel in. But the steering feels dead, lacks feel and doesn’t weigh up as much as one would expect. Our other car in our long term fleet is the Swift which has one of the best steering wheels of Indian manufactured cars, so the Ciaz does disappoint in handling, and there is some body roll too. 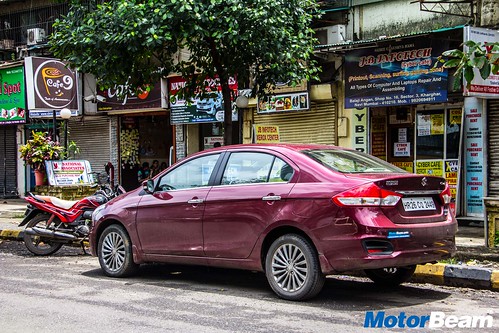 Like we have said earlier, the Maruti Ciaz was never made to please the enthusiast although the RS variant might confuse you to think otherwise. It’s a very practical car to live with, offers plenty of comfort both in terms of space and ride quality while equipment levels are generous. The SHVS tech has actually helped Maruti Suzuki sell more units of the Ciaz – improved mileage, excise duty concessions under the FAME scheme and for Delhi folks, no fear of the odd-even rule. No wonder then, the Maruti Ciaz is the top selling car in its segment. 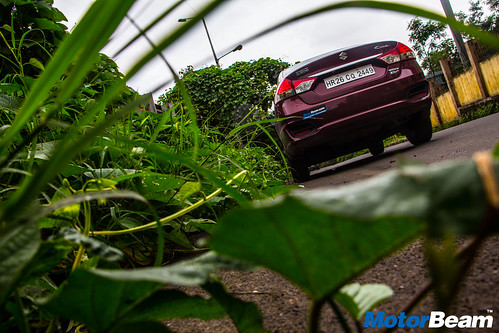 A 1.6-litre diesel in the Ciaz seems an overkill considering the positioning

Maruti Ciaz Diesel To Be Discontinued After Ciaz SHVS Launch