The Maruti S-Presso looks funky, no doubt, but it’s a hoot under the hood too

SUVs. What comes in your mind when someone utters ‘SUVs.’ Masculine, butch, rugged, sizeable off-roaders, vehicles one would take places, chunky tyres and the list goes on. Maruti Suzuki has gone out on a limb here and called their most recent offering, a ‘Mini-SUV’. Yes, it’s mini alright, but an SUV? Well, not so much. What it actually is, is a quirky small car, directed at young, first-time car buyers who probably have their heart set on an SUV but are on an extremely tight budget. The Maruti S-Presso comes with an attractive price tag, a BS6-compliant engine, 6 colours, 4 variants, 1 engine and two gearbox options. It does well on paper, let’s walk you through on how it fares on the road.

Motor Quest: The Maruti S-Presso is based on the Heartect platform which underpins models like Swift, Dzire and Wagon R. The platform brings structural rigidity benefits that might help it meet the new crash test norms apart from making the car light. 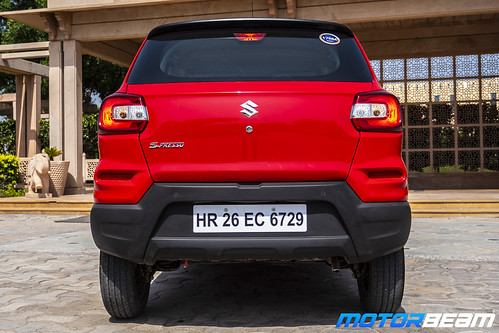 The rear gets chunky black-claddings

Exteriors – The Maruti S-Presso retains the upright stance not far away from the Future S concept displayed at Auto Expo 2018. The one we got our hands on was the top of the line VXi+ variant mated to an AGS (Auto Gear Shift). It had chrome elements in the grille and LED DRLs positioned below the headlights. Sadly, neither are a part of the standard package or even offered in the higher variants. Instead, they are included in an extensive accessories list offered by the company priced at Rs. 1490/- and Rs. 9990/- respectively. I agree that the S-Presso is made to fit a budget, but the chrome could be offered at least in the higher variants. Keeping the chrome aside, the grille mimics its bigger sibling, the Vitara Brezza. The car has a black front and rear bumper to go with the body cladding along with the sides. Truth be told, the base Standard variant, reminds me of the Alto!