The Maruti Ciaz was first unveiled in its concept avatar at the 2014 Auto Expo and gained quite a positive response from the Indian audience. Entering the highly competitive segment later in 2014, the Ciaz managed decent numbers initially and is doing quite well in recent times. What makes it a better package now is the new diesel SHVS (Smart Hybrid Vehicle by Suzuki) variant that has replaced the regular diesel version across all the Ciaz variants. This mild hybrid version of the Ciaz comes with better fuel efficiency and gets more affordable under the government’s FAME program. How does the SHVS work? We find out in this sporty looking RS variant of the Ciaz.

Motor Quest: Maruti Suzuki has seen below average numbers in the C-segment sedan space with the Baleno and then the SX4. The Ciaz has got the carmaker a considerable market share giving a tough fight to the competition. The Ciaz has also managed to attract buyers in the Rs. 10 lakh plus zone for a Maruti. 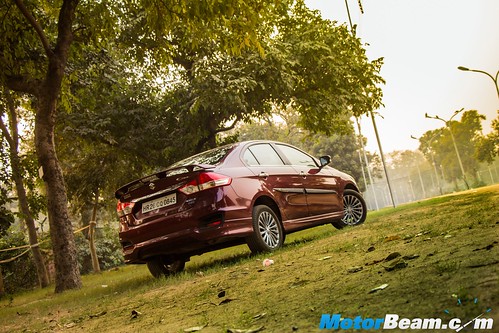 Exteriors – The Maruti Ciaz SHVS gets no exterior updates apart from the badging at the rear. The RS version though looks sporty with side skirts, sporty bumper add-ons and a sizeable spoiler. The alloy wheels too get a darker shade compared to the regular version and goes well with this maroon colour. The overall design language of Suzuki has always been neutral and appeals to a wide audience. The RS version is targeted at the younger audience and it looks quite appealing but some might find the rear spoiler to be a tad big in size compared to the balanced proportions of the Ciaz. 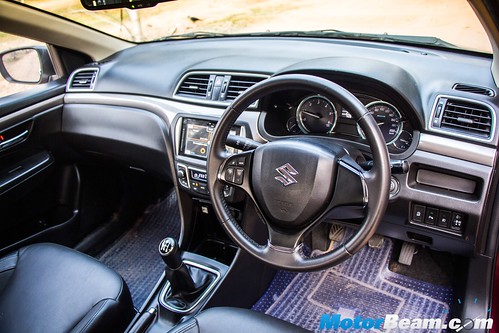 Interiors – The Ciaz SHVS retains the same interiors save for the blue illuminated instrument console with SHVS badging and the idle start/stop button. The MID now gets gear shifting indicator to prompt the driver to shift gears at ideal time for optimum fuel efficiency. The cabin carries forward the beige and black treatment which looks bright from the inside while the RS version gets an all-black interior with silver embellishments on the dashboard. The difference between colour tones is quite noticeable and Maruti has done a decent job with the fit and finish of the interiors.

The SmartPlay touchscreen infotainment system has a lot to offer in the Ciaz. It comes with a navigation system along with Bluetooth connectivity. The screen has an intuitive user interface with good touch quality. Setting up a smartphone is quite easy and the system seamlessly integrates the contacts for direct usage. You get steering mounted audio controls with telephony buttons and also a voice command system for playing tracks, changing FM radio stations and making calls. Other key features include keyless entry with push button start/stop, rear parking camera with sensors, automatic climate control, rear AC vents, individual rear reading lights, etc. 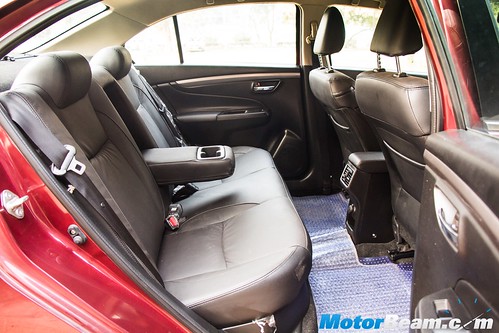 The black seats look quite appealing and are maintenance free as compared to the dirt magnet beige seats. You feel cocooned inside the all-black cabin yet there is a good sense of space thanks to the large glass area and immense legroom at the rear. The front seats are comfortable and supportive while the rear is the best place to be in for the chauffeur driven. You get acres of space to stretch your legs and the ample cushioning provides you with fatigue-free long distance journeys. The boot space of the Ciaz is impressive too offering 510 litres of cargo capacity. 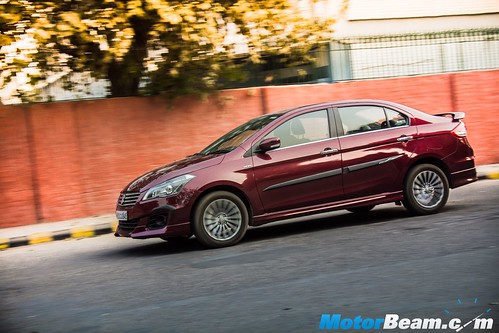 Performance – Most of the changes are made to the powertrain, which is the same 1.3-litre DDiS 200 engine that produces 89 BHP of power at 4000 RPM and 200 Nm of torque that peaks at 1750 RPM. What’s new with the SHVS system is the Integrated Starter Generator (ISG) that comes with a high capacity battery. According to Maruti Suzuki, this system enhances the engines performance and fuel efficiency. We didn’t feel much noticeable change in the performance since the power delivery is still linear but yes, the throttle response is crisper which makes it feel peppier in city driving. 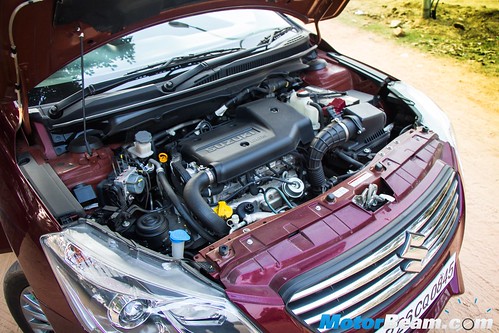 The big high capacity battery helps in saving some fuel

The turbo takes a while to spool until 2000 RPM and post that it accelerates strongly but don’t expect the MultiJet ‘turbo kicked in yo’ feel since the Ciaz moves in a linear fashion. The SHVS comes with idle start stop function that turns off the engine automatically when the car is idling in neutral gear and restarts the engine as soon as the clutch is pressed. We were quite surprised with the smoothness of this mechanism since it doesn’t bother you much while coming back to life between traffic signals. This is because the system uses stored energy to restart the engine and it is belt driven so the engine comes to life relatively quick and silently as compared to the initial crank of the engine when you manually start the car. 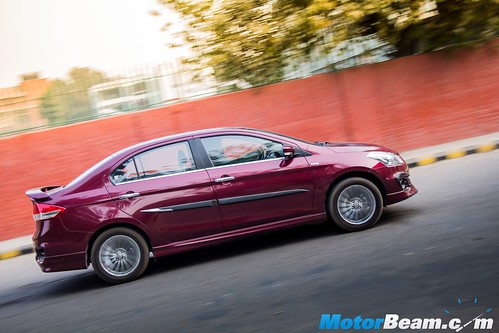 The Ciaz SHVS also comes with brake energy regeneration that stores the energy in the high capacity battery made while braking or decelerating. This stored energy is later used for the idle start stop technology and feeding some power to the engine while accelerating hence providing with better efficiency. The engine is mated to a 5-speed manual transmission with excellent shift quality, it is slick and accurate. That along with the free revving oil burner, you can have some fun in straight line performance. The Ciaz SHVS does the 0-100 km/hr sprint in 13.2 seconds. The motor redlines at 5300 RPM and has a good cruising ability as well, doing 100 km/hr in 5th gear at a calm 2100 RPM. Maruti calls it India’s most fuel efficient car delivering a claimed mileage of 28.09 km/l. You can expect 18-19 km/l in real world conditions with the SHVS technology. 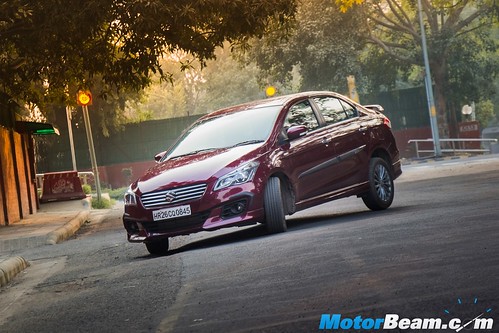 Not a corner carving sedan but offers comfortable ride quality

Driving Dynamics – The Ciaz isn’t a car for driving enthusiasts as the sedan doesn’t feel eager to corner hard. The steering weight is light at low speeds, which makes it a boon to manoeuvre in traffic and parking and weighs up enough to provide confidence at high speeds but while cornering it is inconsistent and lacks feedback. The suspension being tuned on the softer side, there is some body roll to deal with. However, it is a very comfortable cruiser that gulps potholes and bumps in its stride very well. The low speed as well as high speed ride quality is excellent. Braking performance is strong and the car comes to a halt without much drama but the pedal feedback could be better. 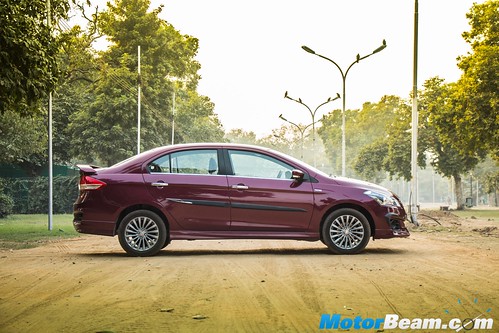 Safety and After Sales Service – The Maruti Ciaz now comes with safety features on all trims including the base variants with optional dual front airbags, ABS and seatbelts with pre-tensioners. However, considering the fact that many buyers of the Ciaz will prefer the back seat, Maruti should also provide airbags for rear passengers as an option. Maruti’s after sales is the best in our country yet because of the widest sales and service network and affordable spare parts. Also, the resale value of Maruti cars is quite strong in India due to the immense trust in the brand. 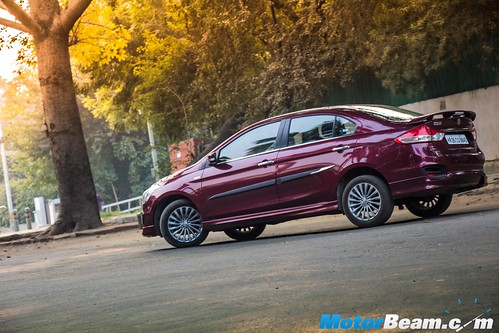 Verdict – Maruti has added the SHVS tech only on the diesel version of the Ciaz. India’s leading carmaker has also managed to get support from the government under the FAME (Faster Adoption and Manufacturing of Hybrid and Electric Vehicles) program by getting a price reduction of Rs. 10-15,000/- on the SHVS variants. Now this makes it quite a desirable package for people seeking a comfortable yet practical sedan at the affordable end of the market. The Ciaz is not a car for enthusiasts but a sedan that is light on the pocket and offers great value for money.

The SHVS version of the Ciaz doesn’t get drastic changes to the car but makes it more fuel efficient with mild hybrid tech that works quite well. The idle start stop is well integrated and helps cut down fuel consumption substantially. The Ciaz now gets lighter on the pocket in terms of running costs as well as the price tag. 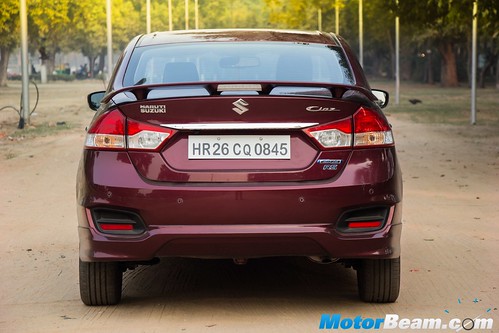 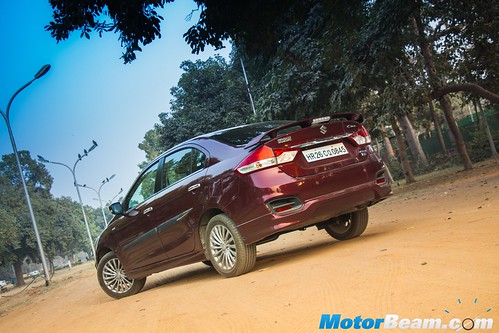