The Maruti Ciaz has always been a popular choice with customers looking to buy a C-segment sedan and it has given some sleepless nights to its rivals. The company is looking to increase its market share with the 2018 Ciaz which is basically a mid-life facelift that not only looks better but also is more powerful. New features too have been added to take on the competitors but are the new additions enough to make the 2018 Ciaz a better package, read on to know. 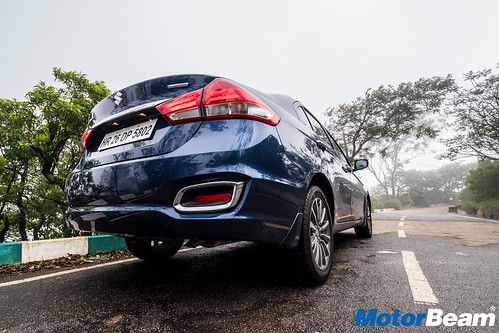 With the updated styling, the Ciaz looks fresher

Exteriors – The 2018 Ciaz continues to have the same design as the outgoing model although with some new design elements. The front receives a revamped bumper along with a rounder looking bonnet that is surrounded by LED headlights and DRLs. The fog lights too are LED and have a new enclosure which in all makes the car look wider. The new front grille gets a gloss black finish and the fascia looks bolder now. Compared to the front, the rear gets more subtle changes like new internals for the LED tail lights and a revamped bumper. There’s no change to the side profile of the 2018 Ciaz except the fact that the top-spec variant sits on precision cut, 16-inch alloy wheels. The lower variants ride on 15-inch alloys while the base trim comes with steel rims. There’s ample use of chrome all around the car. 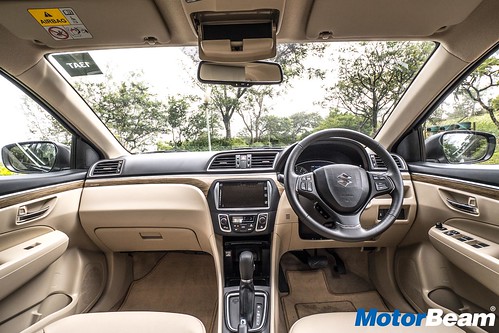 The dashboard now gets a wood inlay in the middle

Interiors – Even though the layout of the 2018 Maruti Ciaz has remained the same, the dashboard gets a different shade of faux wood. The centre console houses a 7-inch touchscreen infotainment system that supports Apple CarPlay and Android Auto along with MapMyIndia navigation. The instrument cluster too has a new design with a bigger multi-information display which looks more modern now. However, the bigger MID isn’t offered with the diesel variant. The sedan is loaded with plenty of features like auto headlights with auto levelling (no manual levelling), keyless entry, push-button start as well as cruise control. The cabin continues to feel roomy and the use of lighter shades help in making the inside feel airy but the overall quality of plastics isn’t that great as they are hard-touch. 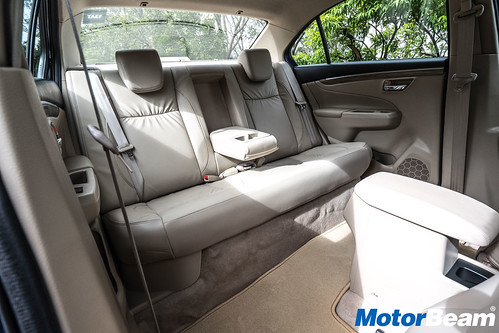 The rear seats have oodles of space for passengers

The rear of the sedan can seat three people comfortably but the middle passenger doesn’t get a headrest like the other two. Under thigh support isn’t the best and people taller than 6-feet will feel cramped for headroom. The floor is however flat which somewhat helps. There are steering mounted controls for driver convenience and the air-conditioning is as powerful as ever. Boot space is good but the spare wheel isn’t an alloy. Also missing is a sunroof which we Indians have grown to love and is offered with Ciaz’s competition.