There is a reason why the Maruti Vitara Brezza is one of the highest selling UVs in the Indian auto market. This compact SUV has been positioned in the sub-4-metre segment and it does all the things that a user would expect his/her car to do. In my previous report, I had mentioned my initial impressions about the Maruti Vitara Brezza ZDi+ but now that I’ve driven the car for almost 8000 kms in varying conditions, I’m in a much better position to state how this car fared in the unforgiving conditions of Mumbai. 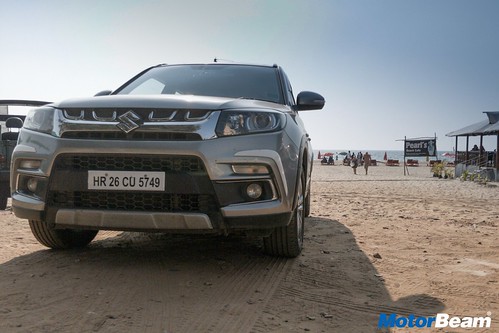 With roads like ours, you need enough ground clearance

It was a bad rainy day in Mumbai and most roads were water-logged to such an extent that it was tough driving a car through the areas and it wasn’t uncommon to see a lot of cars across varying segments breaking down on the road, leaving their owners in the lurch. I was one of the guys who had to face a lot of water-logged roads on my way home. With the Brezza’s fat tyres and the high ground clearance, I decided to take a chance. With the car in 1st gear and the RPM hovering at around 2500 RPM to keep the car in its power band, I made the car chug along and despite so much water around, the Brezza made it. In fact, I even remember driving it on some parts of the road where there were major craters and significant uneven surfaces but this compact SUV somehow made it thanks to the Apollo Alnac 4G tyres which are quite abuse friendly. This is what I like about compact SUVs, the high ground clearance really helps in a country like ours. 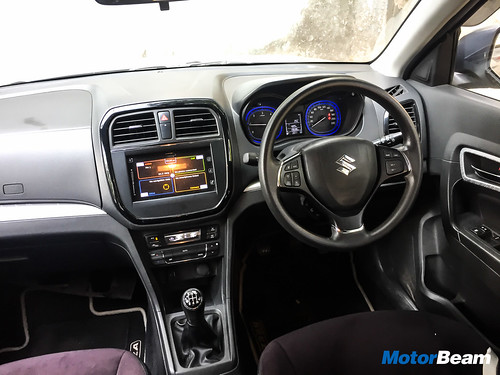 The cabin has a simple layout

At least 50% of my driving happens in city traffic. While the clutch is positively light and the gear lever is slick, the throws are a tad heavy and the steering also isn’t exactly feather light at low speeds. However, the compact size and excellent outward visibility makes the car very easy to manoeuvre. Even parking is a breeze because the rear view camera provides high quality footage on the 7-inch touchscreen and I really liked the performance of the camera even in extremely low-light conditions. My car had an auto-unlock feature where the doors would automatically unlock when I turned the engine off, but auto-locking wasn’t enabled. However, I activated the feature by digging deep inside the MID settings and finally managed to find it, and thanks to that the car now automatically locked after crossing about 20 km/hr. Surprisingly, the car misses out on an automatic day/night rear-view mirror which the Ciaz and Baleno have. 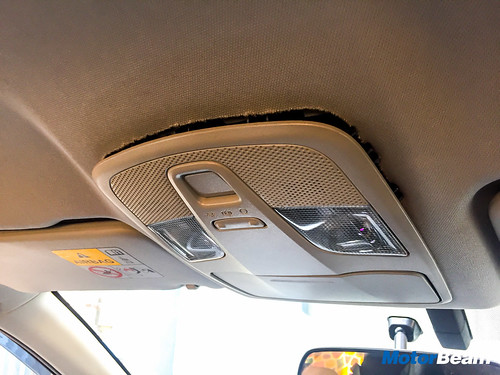 This panel came off from the top on its own

The interior of the Maruti Vitara Brezza is excellent when it comes to utility because all controls fall within easy reach of the hand. Storage spaces are aplenty and there are more than enough bottle holders too. The Vitara Brezza also gets 2 gloveboxes, both of which are large in size while the top one also has a cooling feature.