All the three compact SUVs here are well-designed but still look like hatchbacks on steroids!

The sub 4-metre SUV segment is a rage in the Indian market and now all of them are sporting an automatic gearbox. While the EcoSport was first to arrive in the race, the strong effect of the Vitara Brezza and Nexon should not be underestimated at all. We are pitting them against each other to find out on which one of these automatic compact SUVs should you be putting your money on.

Motor Quest: Automatic cars are becoming the preferred choice for most of the car buyers as they offer a lot of convenience while driving in chaotic city traffic. The Ford EcoSport was the first sub 4-metre SUV to offer an automatic gearbox but only with a petrol engine. The Nexon and Vitara Brezza joined the party later. 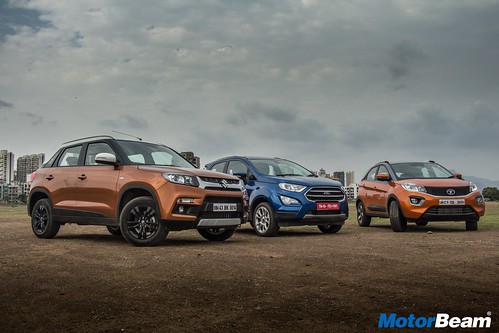 Exteriors – In terms of exterior design and styling, all the three cars in the shootout are like chalk and cheese. Let’s start with the EcoSport which was the first entrant in the sub 4-metre SUV space. The car received a facelift in 2017 with which a lot of things changed for the better. The facelifted EcoSport AT is available with a 1.5-litre petrol engine only and in two variants – Trend+ and Titanium+. The EcoSport is the most powerful-looking vehicle of the trio thanks to the massive front grille, projector headlights with LED DRLs and the heavily sculpted front bumper with faux skid plates. The SUV appeal is further enhanced by the flared wheel arches, 17-inch alloy wheels and the boot lid-mounted spare wheel. 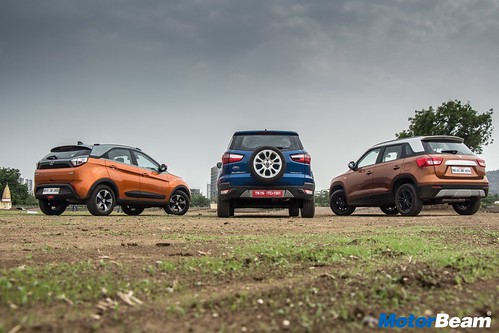 The Maruti Vitara Brezza AMT, on the other hand, has a rugged appeal. Opt for the ZDI+ trim and you get projector headlights with LED DRLs, blackened 16-inch alloy wheels, LED tail-lights and a floating roof design. The side black cladding and the almost 200 mm ground clearance make the Vitara Brezza look substantial. The Japanese compact SUV is available in contrasting dual-tone colours as well. Although the Tata Nexon comes with the typical SUV design traits such as the flared wheel arches, side body cladding and a raised ground clearance of 209 mm (highest in this comparison), the swoopy and curvy design of the vehicle makes it look very youthful. This also means that it turns more heads than its rivals. Automatic version of the Tata is available in a single variant which gets all the bells and whistles like projector headlights with LED DRLs, 16-inch machine-cut alloy wheels, split LED tail-lights and optional contrast roof as well. Overall, all the three vehicles here look good in their own right and since looks are subjective, let us know in the comments below as to which compact SUV looks the best. 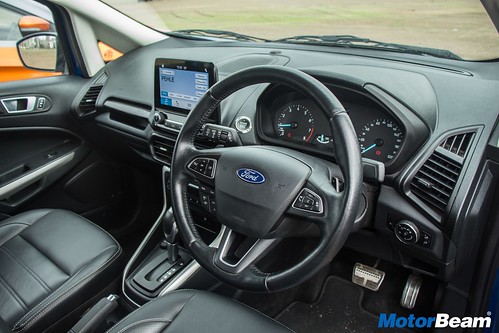 Interiors – The Ford EcoSport’s cabin has all the flair and looks premium thanks to the piano black finishes in the centre console, the chunky 3-spoke steering wheel and the plush 8-inch SYNC3 touchscreen infotainment system (with Apple CarPlay and Android Auto). The fit and finish levels are also a lot better than the rivals. In terms of the space on offer, the Vitara Brezza and the Nexon are closely matched while the EcoSport’s cabin feels cramped. 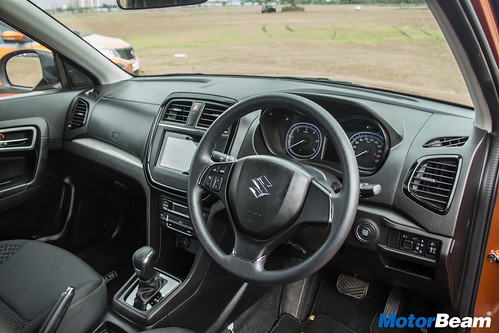 Like the exteriors, the Vitara Brezza’s interiors are also quite straight-forward

The Maruti Vitara Brezza, on the other hand, adopts a simple yet functional approach for the dashboard. The SmartPlay touchscreen infotainment system gets Apple CarPlay, Android Auto and MirrorLink connectivity. While the Vitara Brezza and the EcoSport do with an all-black dashboard, the Tata Nexon gets a three-tone dashboard with a floating 6.5-inch touchscreen infotainment system (with Android Auto only) which makes it more appealing but the fit and finish levels inside the cabin could have been better. 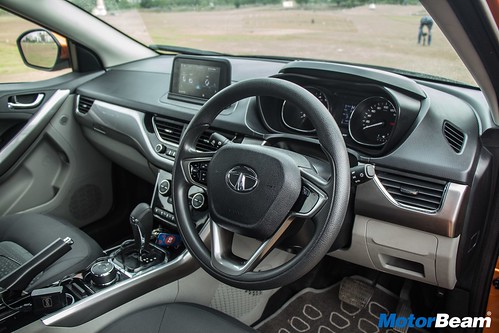 All the three cars here feature an engine start/stop button, automatic climate control, height adjustable driver’s seat, electrically adjustable and foldable ORVMs, rear-view camera and 60:40 split rear seat. While the Nexon features rear AC vents, it misses out on automatic headlamps and wipers both of which are offered on the Maruti Vitara Brezza and the Ford EcoSport. Unique features in the Ford EcoSport are leather upholstery, cruise control and an electric sunroof while there are no unique features in the Maruti Vitara Brezza AMT. Unique features in the Nexon AMT are waterproof wristband key and umbrella holders in the front doors. In terms of seat comfort and space, all the cars here are identical to their respective manual transmission equipped variants.