The MINI Cooper S JCW looks purposeful, it not only goes fast but sounds fast too

I will admit, I was super excited about the MINI Cooper S, it’s not that I haven’t driven the Cooper S before, in fact, I have driven almost all of them, right from the Cooper S convertible to the Clubman Cooper S, they all have been super fun but this one was special and I am probably the last among the journalists to get my hands on this car. The reason to delay the drive was to wait for a time when there wasn’t much workload on the head so I had all the time in the world to enjoy this car, but as they say, such a time never comes and the Cooper S arrived anyways. So what is special? Of course, it’s not your regular Cooper S, it’s the John Cooper Works!

Motor Quest: John Cooper was the first to tune a MINI to go faster in rallying back in the 1960s, his son Micheal started the company John Cooper Works in 2000 which BMW acquired and now JCW is to MINI what M, AMG and RS is to BMW, Mercedes and Audi respectively. 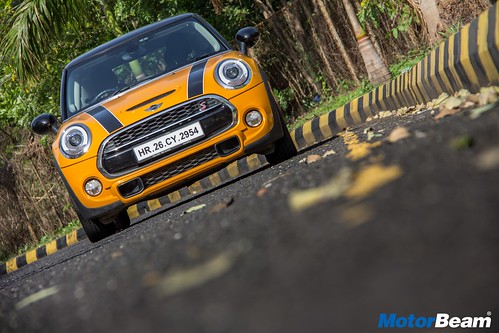 Exteriors – The MINI Cooper S looks all funky and can be easily identified too because it looks the part with the dual-tone paint scheme and heavy chrome treatment. This car has the S badging all around, whether it’s on the grille or the fenders and even on the tailgate, where there is also the ‘John Cooper Works’ badge. The massive air intakes up front, right below the front bumper give a glimpse of its capability while the black cladding which runs on the sides make the Cooper S look less heavy visually. Of course, the roof is contrast colour, black in the case of our test vehicle which also gets the mirrors and pillars in the same colour, making the car look quite unique on the road. 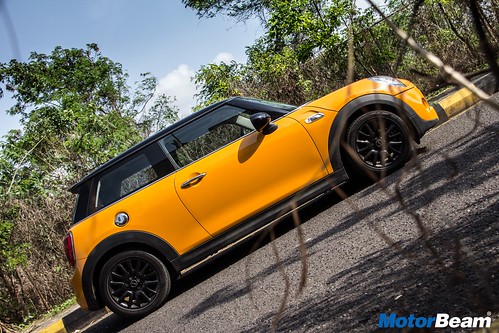 Did you know, the MINI Cooper S is under 4 metres in length!

When we were shooting the Cooper S, people actually stopped us to ask about the car, what is it, how much does it cost, why is it so expensive and what is so special about this particular MINI because it looked different and also sounded different (more on that later). After answering queries, we realised how popular the MINI is in Mumbai but before we could make a conclusion, some kid from a building shouted “B-E-E-T-L-E”. So yes, there is some confusing the Cooper S to be another retro vehicle from far but it looks nothing like the Bug. 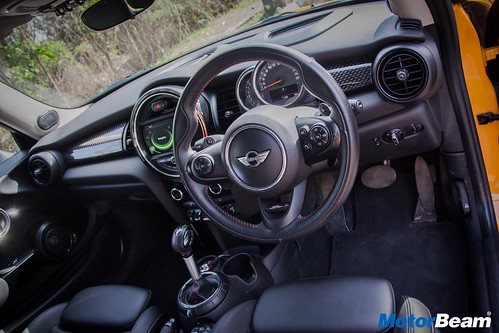 Nice interiors but could definitely do with more equipment

Interiors – Inside, it’s the usual MINI affair, all black dashboard, sporty interiors, large comfortable seats, top-notch quality and a whole lot of equipment missing like this half a million car comes with manual seat adjustment! This being a 3-door, has limited space at the rear although MINI has put ISOFIX seats which is, of course, the norm. Sadly, you still have to use the key to unlock the vehicle but the aircraft style buttons give it the cool factor which all other cars lack at this price. The cluster is easy to read and also shows important information on the go while the large 8.8-inch infotainment screen in the centre is fluid and also colourful. It has all the features you would expect at this price like navigation, on-board computer and the likes. It is essentially a tweaked version of BMW’s iDrive. 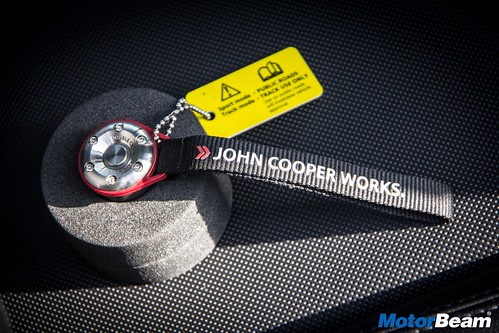 A remote to go from sane to insane with just two clicks!!

Our test car came equipped with a HUD that displays speed and music playlist. There are also two panoramic sunroofs, the front one opens as well. The car gets rear parking sensors which are quite accurate but shockingly there is no reverse parking camera. The vehicle gets a fantastic sounding audio system but you really won’t use it ever (again, more on that later). The rear seats can be folded to boost the puny boot space but you certainly won’t look cool carrying big suitcases in a MINI, especially not in a Cooper S with the JCW badge on its tailgate.