The MV Agusta Brutale 800 remains true to its name, and how!

Home to many a great motorcycle makers including Aprilia and Ducati amongst others, Italy is rightly known as the nerve centre of automotive design. The European country holds a special place in the hearts of many because of its mean-spirited motorcycles. At MotorBeam, we are having the time of our lives astride the intoxicating MV Agusta Brutale 800 that is as Italian as a streetfighter gets. Brought to the country by Kinetic-owned MotoRoyale outlets, this monster has been priced at Rs. 20 lakhs! This brings us to the million dollar question that whether or not it’s worth the massive premium it commands over its competitors. Well, we have a definitive answer to that! Read on to find out.

Motor Quest: Based out of Varese in Italy, MV Agusta traces its roots back to 1945 when the manufacturer was involved in the production of low-displacement cafe-racer motorcycles. After a lot of ups and downs, the company went through a complete overhaul in late 90s. The revamped Brutale 800 came into being in 2013 and made its India debut last year via the SKD route. Besides being the most disciplined Brutale ever built, this one is also the most affordable MV Agusta product in India. Other models in the Brutale range include the 1090 and 1090 RR. 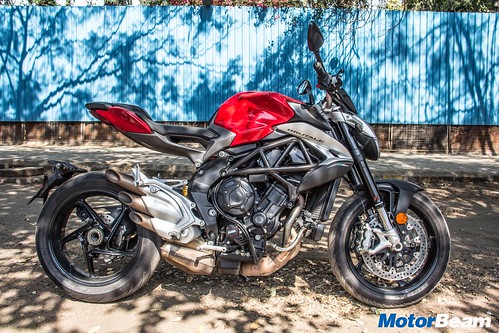 The slashed three-pipe exhaust looks as good as it sounds

Despite minimal body panels owing to its naked body style, the Brutale 800 is so damn gorgeous!

Styling – The Brutale 800 measures 2045 x 875 x 1100 (length x width x height, in mm) in outer dimensions and one has to admit that every inch of it is crafted with perfection. Boasting off precise attention-to-detail all around, the motorcycle’s design revolves around the muscular tank that comes with pronounced knee recesses. MV Agusta has focussed on demonstrating the Brutale’s brutal intentions through accentuated mechanical bits such as the partly-exposed trellis frame, three-pipe exhaust, air ducts up front, massive brake rotors, single-sided swingarm and fat rubber. Both the fenders are minimalist with the rear one holding the rear blinkers and licence plate mount to allow for a tidy tail section. Design of the footpeg mounts is radical and so is the scooped out portion below the rider’s seat. Besides an elliptical LED headlamp, the bike gets a blacked out lower half to add to its sportiness. 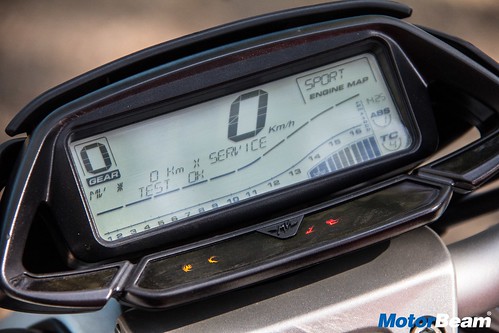 In terms of design, this instrument console is among the better ones from MV Agusta

Instrument Cluster and Switchgear – The Brutale 800 uses a sophisticated all-digital instrument console that houses 10 telltale lights lined up below the main display. Backlit in white, the cluster isn’t exactly loaded to the gills but contains the essentials including a speedometer, tachometer, time, shift light, gear position indicator and riding mode along with set levels of ABS and traction control. However, a lot of information ends up being presented rather haphazardly due to the limited real estate on the unit. This makes it difficult to comprehend the data and one often ends up searching for the desired information, more so under direct sunlight. Switchgear quality is good and there are absolutely no rough edges. Some controls have an unusual placement though and take some time to get used to. 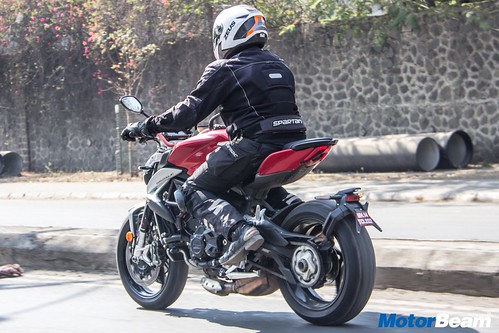 Unless you plan to strap the pillion in place, the back seat isn’t usable at all

Ergonomics – Italians and their love for aesthetics often ends up with ergonomics taking a backseat. Same is the case with MV Agusta Brutale 800 where form is way over function in some crucial areas such as seating. First up, the rider’s saddle sits 830 mm off the ground making it a demanding experience for the shorter ones out there. Adding to the woes are the rear-set footpegs that lend a sense of restricted space apart from making it difficult for the rider to move around. The seat compound isn’t suitable for long distances either. In spite of the wide handlebar being positioned at a comfortable height, the rider triangle is too committed for a street-fighter. This takes a toll on the shoulders and back, further aggravated by the Brutale’s stiff ride quality. There is no visor at the front and no wind protection to talk about. The pillion seat is another joke but comes with effective concealed handles to hold on to in place of grab rails.