It’s ironic how you feel the most alive when your heart skips a beat! This was a necessary quote because all the text below is about the most attractive looking motorcycle in the world. Not to forget that it’s incredibly fast to handle. Well, all of this started earlier this year when the Kinetic Group introduced the MV Agusta line-up in India. On stage was the MV Agusta F4 which caught everybody’s attention. Well I had a smile on my face because I knew I would be riding that amazing machine once for sure. As the day arrived to ride the MV Agusta F4, we were astounded as it wasn’t the F4 but the F4R! You may continue to read as we tell you how amazing the F4R is.

Motor Quest: The presence of the MV Agusta F4 dates back to 1997. Designed by Massimo Tamburini, the F4 has carried the heritage in racing and motorcycle beauty for almost two decades now. Earlier in 2016, MV Agusta made its presence felt on Indian shores with the launch of its line-up including the F4, F3 and Brutale 1090. 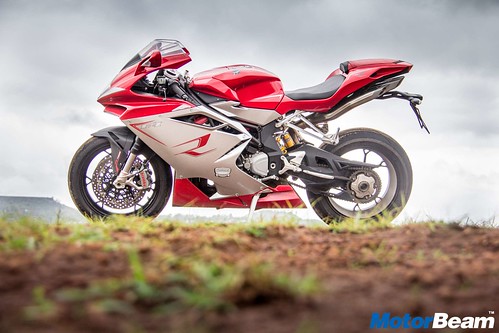 The MV Agusta F4R is so beautiful, it looks like a painting

Styling – Italian designers always have it within them and they sketch out the most outstanding designs. The same is the case in the world of motorcycles, designed by Massimo Tamburini, the MV Agusta F4 is a very beautiful looking motorcycle. It even has a book written on it – ‘The most beautiful motorcycle in the world’. It all starts with the arrow headed design of the front fairing which continues to the one piece side fairing which connects to the lower cowl. Just above the fairing sits the beautifully sculpted fuel tank between which the trellis frame is also visible. Following the fuel tank is the split-seat which extends along the flowing design of the body panels to the rear. 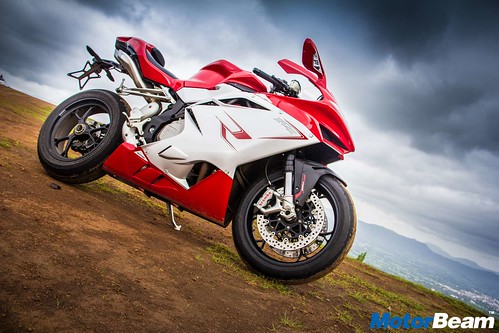 The red and silver colour scheme is a sure head turner

The MV Agusta F4R doesn’t ask for attention, it just grabs it any which way

The front holds a small projector headlamp with a diamond design and the twin DRL LEDs just mounted below it. The rear has a similar twin LED tail-lamp but it’s the four exhaust pipes just running below which is matched exactly to the edges of the body. The body coloured rearview mirrors get indicators mounted on them while at the rear it’s the single-sided swingarm which grabs all the attention. The 6-spoke alloy wheels just keep adding up to the beauty of this motorcycle. There is a small body coloured rear seat which at a quick glance looks like a seat cowl. 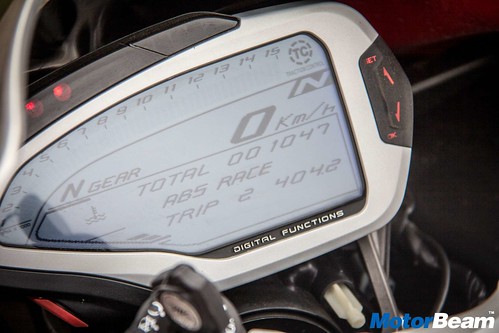 Instrument Cluster and Switchgear – The console is a complete LCD unit which is common on almost the entire MV Agusta line-up except for the Brutale 1090. This instrument cluster provides lots of information including a tachometer, traction control indicator, gear position indicator, gear shift indicator, speedometer, odometer with twin trip meters, ABS indicator, riding modes and engine temperature gauge. All of this can be viewed and controlled using the two buttons on the left switchgear and two on the console itself. To fiddle around with the riding modes, the starter button helps to engage into a particular riding mode and switch between the others. With everything else present, it misses out on a fuel gauge. The piano black finish on the switchgear is pretty decent too. 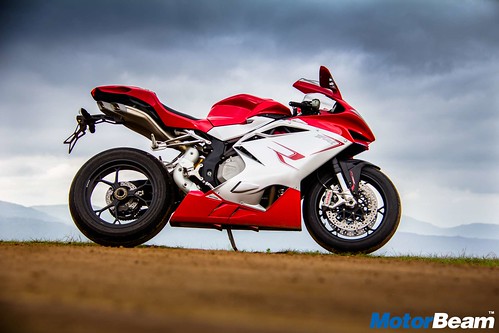 Ergonomics – The dimensions of the MV Agusta F4 make it feel very nimble while it packs up 190 kgs of weight and a seat height of 830 mm is not really comfortable. The clip-on handlebars, higher seat height with rear-set footpegs makes it a complete race spec recipe. The seating posture is a lot demanding as this bike is a complete race spec model, yet being road legal. Even after all this, the motorcycle feels very small for short riders, it’s a boon when riding, while for tall riders, it might feel cramped. Also, it is very difficult to move it around while standstill or in traffic as the weight of the bike is felt significantly. 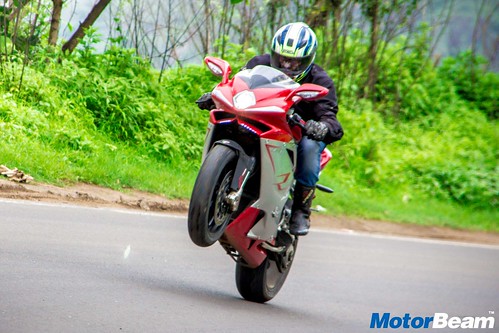 Performance – The MV Agusta F4 has been present since the year 1997 while it entered the litre-class segment in 2005 with the F4 1000. The latest generation of the F4 series produce the maximum power of their timeline while there is a difference in power output for all of its variants. The F4RR is the current iteration of the F4R with the same engine, having the same set of tune and producing 201 BHP of raw power at 13,600 RPM and 111 Nm of torque at an early 9600 RPM. Early torque and late power gives the F4R a huge power-band which increases exponentially. 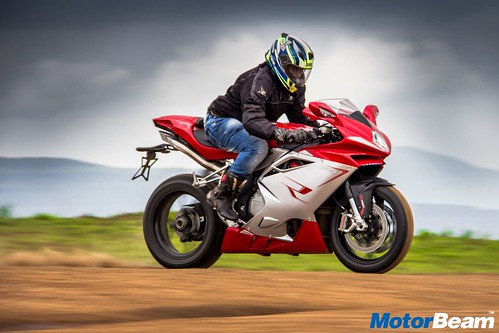 The 998cc inline-four motor vaporises the high-octane fuel in no time, the MV drinks

The throttle here is controlled by ride-by-wire connecting to the MVICS fuel injection system along with throttle bodies from Mikuni. The electronic engine management system even senses the detonation and misfire and manages power along the modes. The four riding modes include a custom mode making the F4R completely open to its riders adjustments. The F4R is also equipped with a quick-shifter enabling extremely quick gain in pace for the motorcycle. As part of the riding modes, it gets 8 levels of traction control to keep the front wheel to the ground. 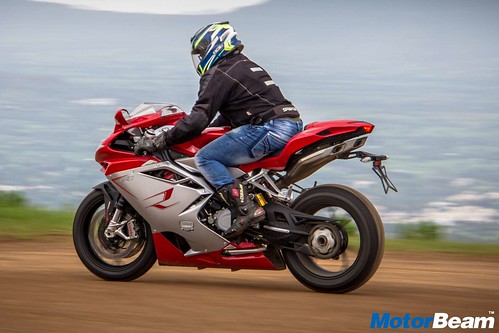 The console shows a limit of 15,000 RPM while the rev limiter limits itself the engine to 14,000 RPM. Even in normal riding mode with traction control set to maximum, a punch of throttle makes the MV Agusta F4R lift. Post 8000 RPM, the front wheel just floats in the air if the acceleration is immediate. In Race mode, the F4R lifts even in second gear post 9000 RPM. The first gear is capable to pull the motorcycle to 135 km/hr without hesitation while the second and third gears help it cross the 200 km/hr mark. Power delivery is fantastic but the NVH levels are not very well maintained. Even with the sound of an inline-four, there is harshness felt from the motor while vibrations are present all the time. 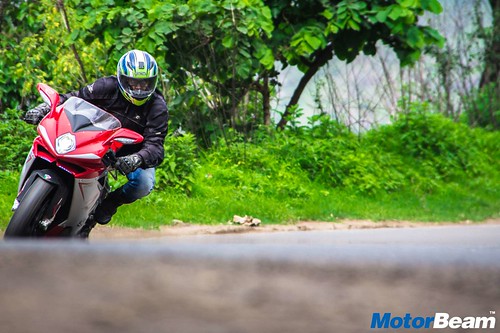 A gem around corners, this motorcycle is made for the race track

Riding Dynamics – The MV Agusta F4R is a complete race spec motorcycle. Aggressive riding posture makes it easy to handle but at the same time, it becomes uncomfortable to ride it for a longer duration. The F4R gets a steering damper and the suspension is from Ohlins, giving it the best possible spec for amazing riding dynamics. The Ohlins have dual set of rebound and pre-load, making it completely adjustable. With the adjustments, the seat height can also be modified by adding or subtracting 10 mm to it. The suspension set-up is hard, perfect for the tarmac and highways, while it sends a lot of feedback to the rider depending on the type of road condition. 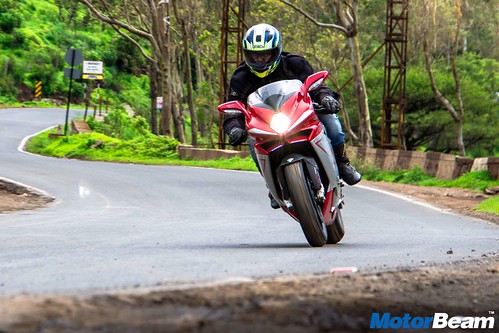 Losing control of this motorbike is difficult, it only happens if you are going too fast but its the traction control with lean angle sensor which doesn’t let the tyre spin out. Adding to the traction control, its the ABS system from Bosch which has a race mode and gets RLM too. A pair of Pirelli Super Corsa tyres are mounted onto to the forged 6-spoke aluminium wheels. The single-sided swingarm also helps in reducing the weight to some extent. 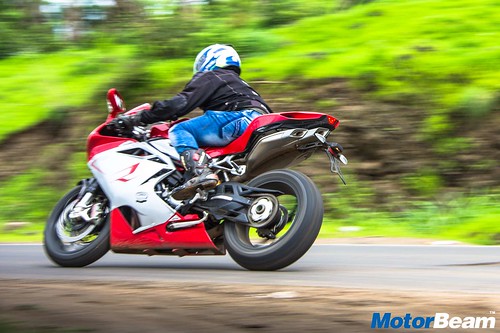 Once on the move, this superbike feels a lot more flickable

The feedback from the brakes is astonishing as the dual 320 mm floating steel discs provide extensive feedback and the single 210 mm disc along with ABS inspire loads of confidence. Around the corners, the MV Agusta F4R stays very flickable while on the straights, it is a lot more agile except for the fact that the front lifts with immediate acceleration. The aerodynamics of the thermoplastic fairing is very well designed while the small bubble visor does cut-through a lot of air for the rider. The nimble and small character of the motorcycle makes it completely adaptable but a track is a much better place to ride a Italian superbike like the F4R. 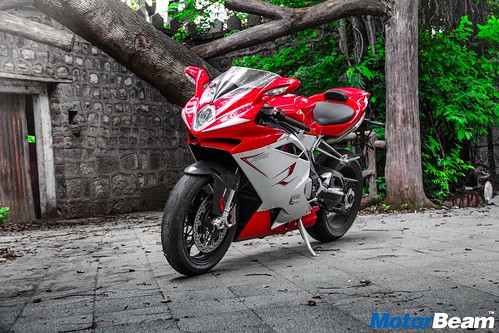 The MV Agusta F4R never blends in, it just stands out!

Verdict – The MV Agusta F4R is a motorcycle which is the older name for the MV Agusta F4RR. Though it gets the colour scheme of the regular F4, there are bits of hardware which makes it different and adds up to the cost. Hardware like the lighter aluminium alloys, suspension from Ohlins, steering damper, different state of tune for more power and a few bits which reduce the weight of the bike, come along in the F4R or F4RR. The F4 being priced at Rs. 32.38 lakhs makes for an expensive but exclusive proposition. The F4RR costs upwards of Rs. 43 lakhs making it the most expensive litre class motorcycle in the country. With that amount of money, it will be the self satisfaction and pride of owning something as exclusive as the flagship MV Agusta. 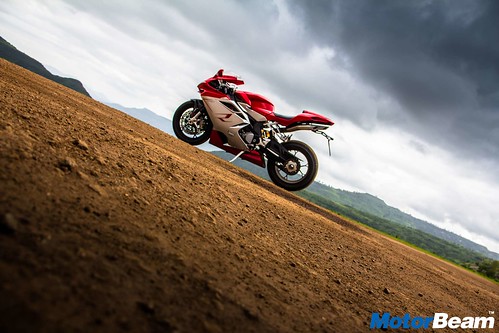 With a beautiful backdrop, the bike does look small 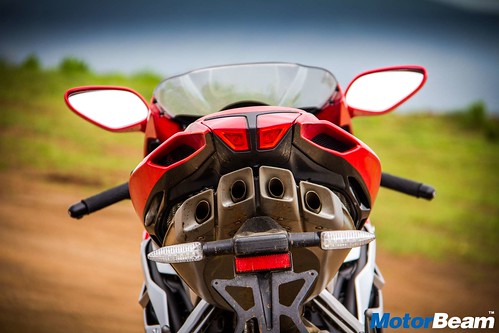 The quadruple pipes at the rear grab all the attention 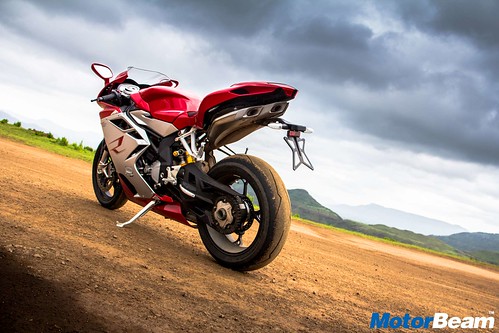 The MV Agusta F4R is one unforgettable motorcycle

“Every MV Agusta is all about art and the F4R is no different. Once you get on the saddle, you realise this is a very aggressive motorcycle to ride and the refinement levels aren’t great either but as you pick up speed, the motor starts to sound better. The F4 is one way to attract a ton of attention but MV Agusta is charging a huge premium on this superbike so if you are the value conscious kind, look at the Japanese alternatives as this Italian doesn’t perform better.” – Faisal Khan, Editor, MotorBeam.
“The MV Agusta F4 is the base variant of the F4 line-up while the F4RR and F4RC are part of the line-up which are produced in a very small quantity. The F4R is an amazing superbike, very agile, nimble and small yet capable to do lots of stuff. It is a proper litre class motorcycle which will adapt more to the track than the Indian roads. The F4R is the hardware rich variant of the F4 and is almost similar to that of the F4RR. MV Agusta does bring out desirable motorcycles, it’s the pricing which limits a lot of people.” – Dhanil Vira, Road Tester, MotorBeam.
“As Dhanil has time and again repeated, the F4R is very eager to ride on just one wheel. The power at higher RPMs is ridiculous. The in-line four sound is beautiful while the looks are unique. The F4R is a serious motorcycle and I would recommend it only to the riders who live their life on racetracks. The electronics package is extensive and the hardware package is also spot on. However, the refinement and ride quality are a huge let down. Excessive vibrations along with the aggressive riding stance doesn’t add up to the desire of riding the F4R again. But who am I kidding?” – Adwait Babras, Road Tester, MotorBeam.