Motorcycling can also be about ego, ‘my bike is faster than yours’ is something we have often heard our friends brag about. This thinking made the marketers at Bajaj Auto come with a master stroke which pushed the Pulsar 220 out of showrooms with little effort. The ‘Fastest Indian’ tagline for the Pulsar 220 has swelled many owners chest in pride while also making them play real life road rash. But the marketing gimmick did not last long because newer bikes were launched which were faster. Today, it’s the KTM RC 390 which is the fastest India made motorcycle, so how do these two bikes stack up?

Motor Quest: There is no direct rivalry between these two bikes, the closest competitor to the KTM RC 390 is the Bajaj Dominar 400 till the Pulsar RS 400 is launched. Meanwhile, the Pulsar 220 doesn’t compete with any KTM bike, the closest being the Duke 200 which is poles apart in many ways. 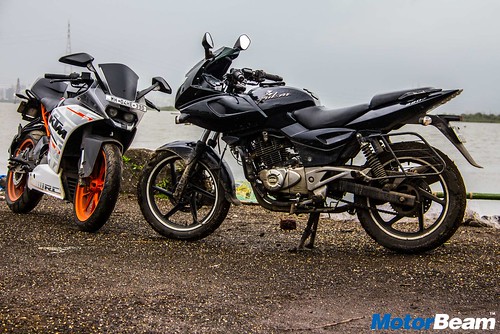 Styling – There is no denying that both these bikes differ in styling as much as chalk and cheese. On one side we have a semi-faired motorcycle which is India’s second semi-faired bike (after the Hero Honda Karizma). While on the other side we have a full-faired track machine with loud styling in the form of orange wheels, exposed orange frame and a headlight (with two projectors, the 220 gets a single projector setup) which reminds us of an alien. When seen side by side, the Pulsar 220 does look dated in front of the rather fresh KTM RC 390. 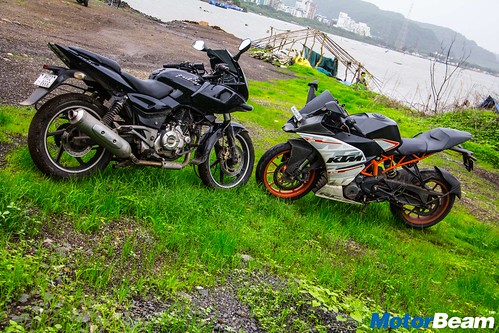 However, one can’t deny the fact that the Pulsar 220 has aged gracefully. It was first seen in 2007 and nine years down the line, it still manages to look attractive enough that close to 4000 people still put their money on this bike every month. You can get the P220 in a slew of colours but the black is the most famous while the KTM RC 390 can be had in any colour too, as long as it is white! One can opt for the racing sticker kit to distinguish their pocket rocket from other Austrian machines on the road. 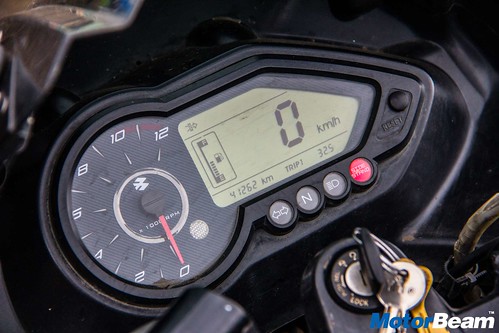 Instrument Cluster and Switchgear – The console on the Pulsar 220 is very dated now but has significant importance nonetheless. The Pulsar was the first Indian bike to get a digital speedometer, those days and even today actually, the Karizma R uses an analogue speedometer. A digital speedometer isn’t a big deal now though as even some commuter bikes in the 100-125cc segment possess it. The 220 also featured a shift light, an alien concept in those days, forcing others to take notice and up their game. 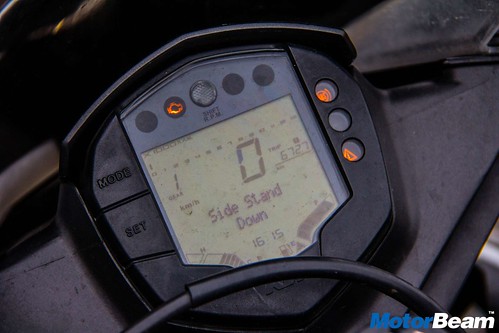 And upped the game they have, yes KTM has put in everything possible in their instrument cluster, heck, it might just even read your heartbeat, that’s the amount of information the all-digital console has to display. But the 220 beats the RC 390 in terms of readability of the tachometer, because of the analogue layout. That said, the Katoom will display everything from distance to empty, real time mileage, average speed and you name it, it’s got it! Both bikes share switchgear and the quality is similar too, which is good with backlit switches although the 220 has self cancelling indicators which don’t really work that well. 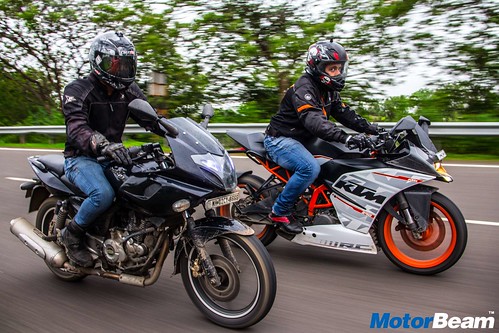 The Pulsar 200 has very comfortable ergos, the KTM not so

Ergonomics – One of the major reasons as to why the new generation of Pulsars aren’t able to succeed in the market is the Pulsar 220, many still prefer the old model and comfort is where this motorcycle shines. The ergos are very comfortable and even a pillion rider is more than welcome on this Bajaj bike. Meanwhile, the KTM RC 390 has an aggressive riding position which is bound to tire you out in no time. It has a pillion seat which looks like a cowl and a pillion rider isn’t invited on the orange machine. 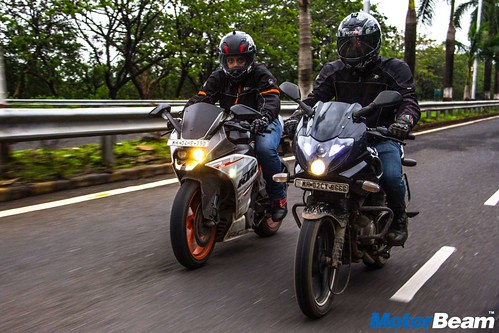 Performance – The Pulsar 220 uses an ancient engine which could very well be in the history books by now. The 220cc, single-cylinder motor is oil-cooled and uses two spark plugs (DTS-i). The 4-stroke carbureted unit has 2-valves and outputs 21.05 PS at 8500 RPM and 19.12 Nm at 7000 RPM. The torque figure is better than the new generation 200cc, liquid-cooled, 4-valve, triple-spark engine that does duty on the Pulsar AS 200, the replacement of the 220. Meanwhile the KTM RC 390 is as modern an engine as can be. The 373.2cc single-cylinder mill is liquid-cooled and uses only one spark plug. The 4-stroke fuel-injected powerplant has 4-valves and belts out a stunning 43.5 PS at 9000 RPM and a mind numbing 35 Nm at 7000 RPM. 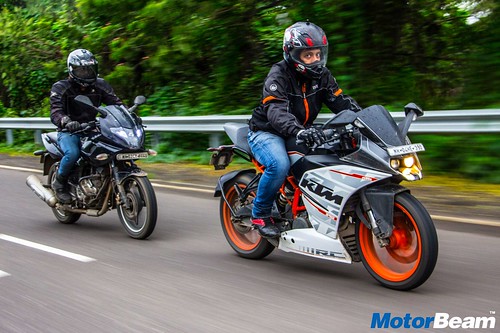 The tech in the engine of the KTM is also splendid with Nikasil coating, diamond like carbon coated finger followers and forged piston. What this results is the KTM being twice as fast to the ton, doing 0-100 km/hr in a mere 5.6 seconds while the Pulsar 220 takes 11.26 seconds. Top speed too is much higher on the KTM, a VBOX tested 169 km/hr against 131 km/hr on the Bajaj. But where the P220 reels back an advantage is mileage, returning close to 40 km/l against the 25 km/l on the RC 390! That and the 50% bigger fuel tank on the Pulsar 220 (15-litres) when compared to the KTM (10-litres) means that the guy at the fuel station isn’t your best friend. And yes, when you ride either of these bikes, the less advanced Pulsar is better sounding with its throaty exhaust note. 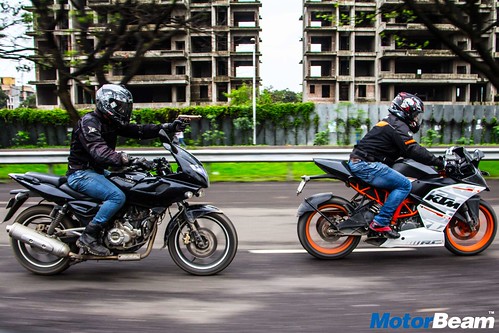 The gearbox on the KTM offers better shifts with the Pulsar having a gear less at five but a lighter clutch. When you ride both these Indian bikes back to back, you do appreciate the Pulsar for its torquey nature. It might produce peak output at the same 7000 RPM as the KTM but the RC 390 is very tall geared and thus can’t be ridden in high gears at low speeds, making it a pain to ride in the city as it can overheat and shut. No such issues in the Pulsar 220 which is very much fun to ride in the city and twirl back your mirrors and you get better aerodynamics too, or that’s what most Pulsar 220 owners think anyway. 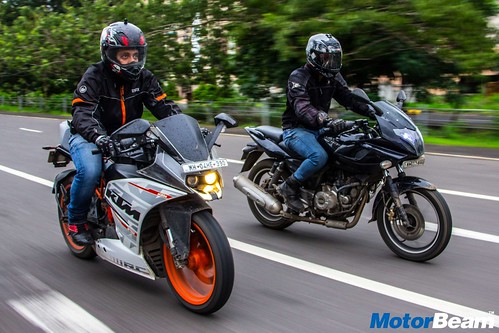 Riding Dynamics – Nothing says chalk and cheese better than the hardware on these two motorcycles. The P220 uses a diamond frame, telescopic front forks and twin rear shocks. The RC 390 makes use of a powder coated trellis frame, upside down forks and a rear monoshock. Both bikes have clip-on bars but the KTM is stiffly set-up and has much wider and grippier rubber too, making it the king of race tracks. The Pulsar 220 isn’t very dynamically potent and while the RC 390 suffers from low ground clearance, the Bajaj bike’s main stand scrapes when you try to lean aggressively. 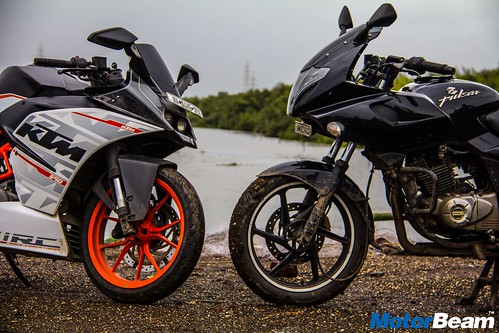 The Pulsar 220 and RC 390 are opposites, one rides well, other handles on rails

Further making the KTM RC 390 a better cornering machine is the slipper clutch while ABS is offered as standard although brake bite isn’t that great. The Pulsar has decent brakes but it’s really the soft suspension which is the highlight of the riding experience as the 220 is very composed over bad roads. The RC 390 is super stiff and does transmit the bumps to the rider. The orange machine is smaller in all dimensions and also has a shorter wheelbase but isn’t an everyday motorcycle like the Pulsar 220. 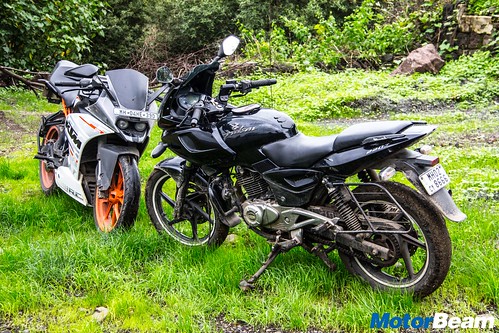 Both KTM and Pulsar have one thing in common, they offer high VFM

Verdict – This isn’t a normal shootout, it’s the curious case of two fastest Indian bikes. There is a lot differentiating these bikes and the biggest of them all is the price. One can almost get three Pulsar 220s for the price of one KTM RC 390 and yet the Austrian machine is the bargain of the century for a motorcycle enthusiast. The 220 made for a splendid entry point for performance biking and many P220 owners now ride a KTM. The Pulsar 220 was once the fastest Indian but now it’s KTM which rules the hearts of Indian bikers. 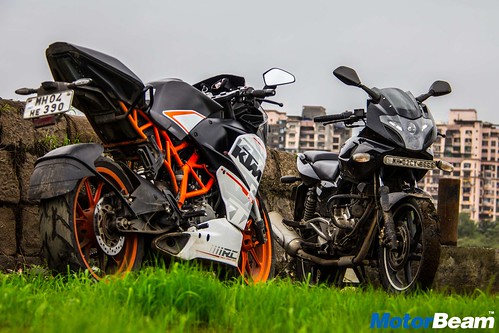 “The KTM RC 390 can be called as the modern day extension of the Pulsar as it carries a similar ideology of being high on performance and low on price. The Pulsar 220 has aged a lot but continues to be sold as there is still good demand for it as it offers fun and comfort. While the KTM RC 390 is nearing its next generation model. There is no reason why I would want to buy the 220F when there is the fantastic Pulsar AS 200 while the KTM RC 390 has no competition at all at its price point.” – Faisal Khan, Editor, MotorBeam.
“While it’s hard to understand why the 220 is still one of the top selling Pulsar after eight years of its debut, the KTM RC 390 will answer all your questions happily. However, the similarity between them is not easily visible. Both are cheap, look fantastic and great performers. Both set the market blazing once they started playing in it. Even though both belong to different categories, they have hardcore fan-following regardless. And the best part? Both of them are practically step-brothers!” – Adwait Babras, Road Tester, MotorBeam. 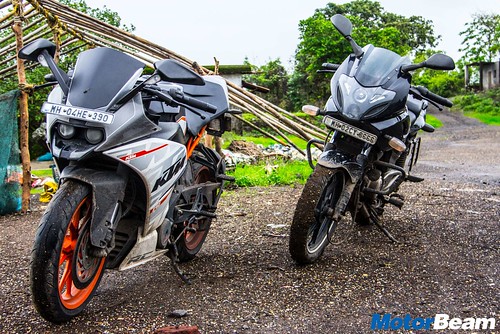 Once the fastest Indian, the P220 now hands the crown to the RC 390