Visual differences aside, there is nothing else to differentiate these twin wolves from Bajaj

Yes we know the Pulsar 200 NS is on its way out but does it really need to go? Is the Pulsar AS 200 a worthy successor to the first of the second generation Pulsars? Does the Adventure Sport model bring anything substantial to the table? Loads of questions have been popping up in the heads of Pulsar fans so we did the next best thing, put both these bikes into a head to head shootout. With most parts being common between these bikes, to the tune of 99%, this shootout won’t be a long one.

Motor Quest: Bajaj unveiled the Pulsar 200 NS to the world in January 2012 and prior to launch, the bike wasn’t spotted even once. The Pulsar AS 200 builds on the 200 NS and was launched earlier this year, with both siblings being almost identical. 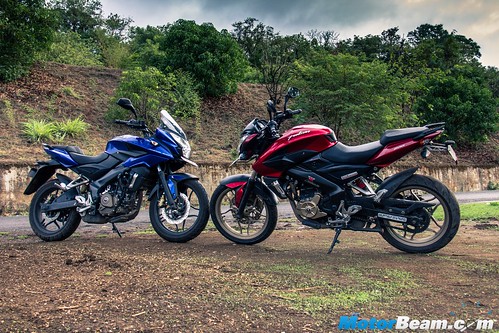 Styling – The Pulsar AS 200 is longer and taller than the Pulsar 200 NS but the width between both these bikes remains the same. There aren’t many changes to the design of the Adventure Sport model, the length being different due to the new conventional mudguard instead of a tyre hugger while the height has increased due to the new windshield visor. The other big change in styling to the AS 200 is the semi-fairing, the success of the Pulsar 220F made Bajaj believe that people love fairing, even if it’s half. The AS also gets a projector headlight for the low beam which helps a lot in night riding. Thus the AS 200 turns out to look fresher but many still like the street-fighter appearance of the 200 NS. The older 200 NS was more impressive to look at as all new models come with the dual-tone ‘Speedlines’ shade which we personally don’t like much.

The same instrument cluster features on both these Pulsars, can you guess which is the Adventure Sport model?

Instrument Cluster and Switchgear – There is absolutely no difference between the instrument clusters of these bikes, they are identical and use an analogue digital console with the tachometer taking centre stage, tell-tale lights on the left and a digital display on the right which also has a clock, service due reminder and side stand indicator. We really like the centre tachometer which although a lot like Benelli motorcycles, makes it easy to keep a tab on engine revs. There is also a shift light which doubles up as low fuel warning. The AS being positioned as a tourer, a gear position indicator would have been a nice addition. 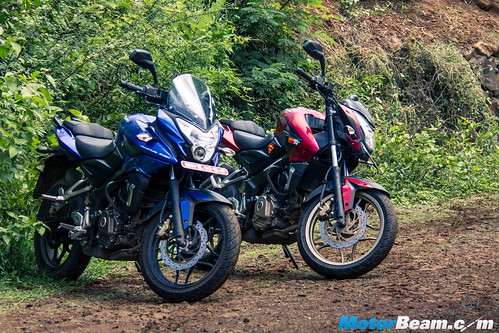 Ergonomics – Both bikes have a very similar riding position, you sit upright and hold onto clip-on bars which aren’t dedicated in any way. The seat is comfy and can accommodate a pillion without much fuss. There is actually no difference between the ergonomics of these two bikes, the only big difference is the Pulsar AS 200’s lower windblast which makes riding for longer at higher speeds an easier task. The rearview mirrors on both bikes are the same too so looking at vehicles behind you is the same on both these Pulsars. 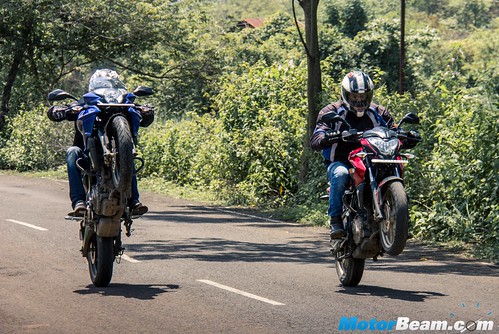 With the same power on offer, higher refinement on the AS 200 is a plus

Performance – Both these bikes use the same engine, drawing power from a 199.5cc single-cylinder motor that generates 23.5 PS and 18.3 Nm. There is no difference in the 3-spark powerplants powering these bikes so one would expect performance to be identical too. But that’s not the case because the Pulsar AS 200 is heavier but it’s a newer motorcycle which has got improved refinement courtesy of the learnings from the Pulsar RS 200 project. Thus, when we put these bikes in a drag race, the result was as follows.

As can be seen, the heavier Pulsar AS 200 is quicker to take off and is actually quicker till 60 km/hr, post which the lighter 200 NS takes the lead and easily hits the ton quicker at under 10.50 seconds. Both these 4-valve siblings annihilate the higher displacement Pulsar 220 which although higher on torque, is lower on power and redlines at a lower RPM. The 200cc bikes have good linear performance with a punchy mid-range and a good top-end too. There are lesser vibrations on the AS 200 and it holds the redline better. Both bikes get the same 6-speed box and shifts felt a bit better on the newer model. There isn’t anything to differentiate between their mileage either with both returning between 35 to 40 km/l. Top speed is rated at 136 km/hr. 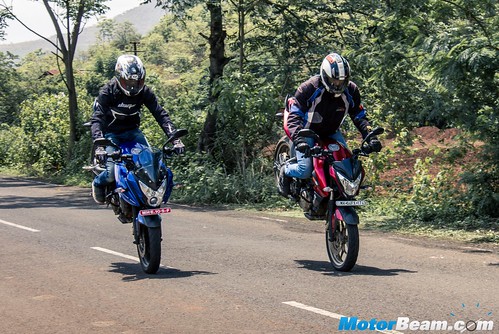 Riding Dynamics – Both these Pulsars are underpinned by a perimeter frame and come with the same sized tyres. The AS 200 has a tweaked suspension but that’s not apparent when you ride both bikes back to back, the Adventure Sport model doesn’t get long travel suspension either and thus the ride quality on both motorcycles is more or less the same. The set-up is on the stiffer side but still compliant enough for our roads. Handling is good but the AS 200 is being offered with EuroGrip tyres for the time being while some units of the 200 NS came with MRFs which offer much better grip. Braking performance is the same on both bikes. It is much easier to cruise on the AS 200 due to the large windscreen visor. 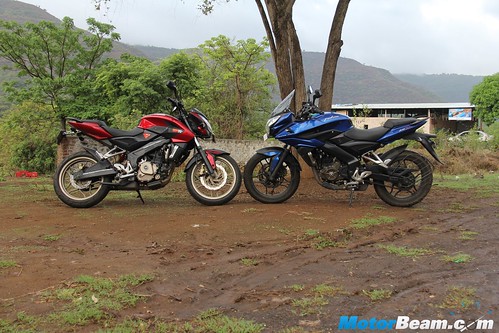 Verdict – The Pulsar AS 200 picks up where the Pulsar 200 NS leaves, both bikes being similar in almost all possible ways and thereby rightly questioning the need to keep both on sale. Thus with Bajaj having decided to bid adieu to the 200 NS, we feel it’s the right decision. The AS 200 offers everything that the Naked Sport model did and even more. While it’s as fast, fun and dynamically sorted as the NS, the AS also offers slightly more refinement and the extra bits which are sure to woo prospective 220 buyers. The addition of a semi-fairing, projector headlight and a windshield visor does add value, more so with there being no price difference between the two models. Goodbye 200 NS and hello AS 200.

The Pulsar AS 200 is the next step of the Pulsar 200 NS and does well to replace the street-fighter model. More than replacing the 200 NS, the AS 200 needs to successfully take over from the Pulsar 220F, whether it does or not is something which only time will tell. 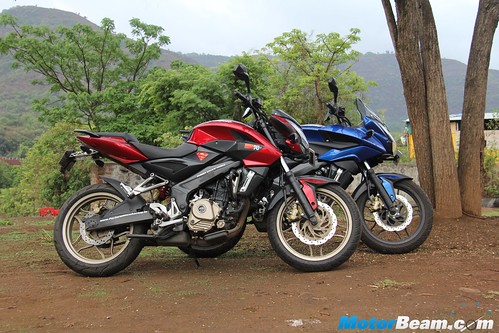 For around Rs. 1 lakh, you get unbeatable performance in these 200cc Pulsars

“The Pulsar AS 200 just feels like the better package and for those who want the 200 NS, it’s better to buy the AS 200 and remove the windshield visor which is probably a possible sour point in the looks department. At the same price, the added benefit of a projector headlight and style value of a half fairing seems unbeatable to me. Not to forget the improved refinement of the triple spark motor.” – Faisal Khan, Editor, MotorBeam.
“Since the launch of the Pulsar 200 NS, the performance biking scenario in India changed once again. A 10 second for the ton bike for under a lakh was beyond a dream come true for bikers and with the AS 200, Bajaj is taking value to a new level. The projector light does help a lot at night and to keep those high speeds, the visor does a fine job. I would still like to pick the 200 NS though, it’s a proper street-fighter.” – Viraj David, Road Tester, MotorBeam. 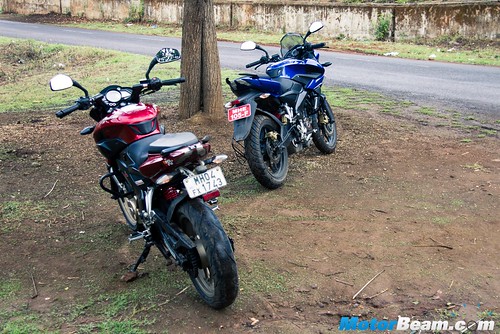 Which of these Pulsars do you like more? Is the AS a right replacement to the NS?