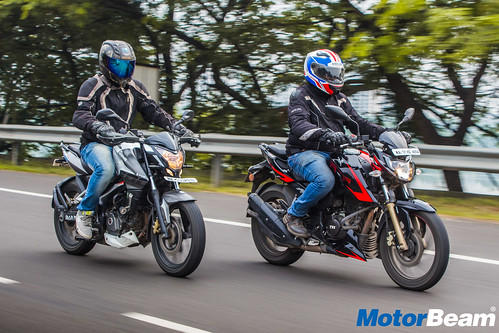 Performance – In theory, the Bajaj Pulsar NS 200 is the winner and it’s the same case on the road as well as it is 2 seconds faster to the ton with a 0-100 km/hr time of 10.51 seconds. The Apache 200, however being 2.5 BHP less, isn’t too far behind the NS if we put them in a quarter-mile drag race. Both the engines are rev-friendly while the power kicks in very late for the Pulsar. However, the 200cc TVS motor has a better mid-range and a punchy low-end when compared to Bajaj’s 200cc motor where the gearing is on the taller side. The Pulsar NS 200 has an advantage with its liquid-cooling while the Apache 200 is air and oil cooled. Both the engines come with 4-valves and return almost the same fuel efficiency of 35-40 km/l. 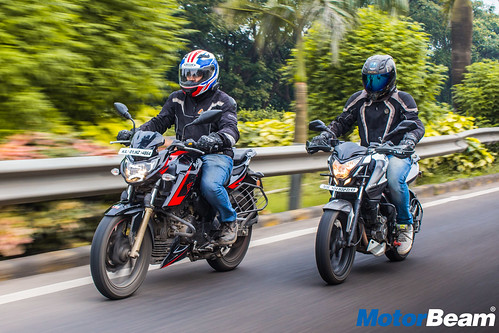 Both bikes have a throaty exhaust, yet the Apache sounds better than the Pulsar due to the dual-barrel exhaust

The Pulsar also has an advantage with a 6-speed gearbox but the clutch feels slightly heavy. The Apache, however, gets only a 5-speed transmission and it’s equipped with a slipper clutch ensuring smoother gearshifts. NVH levels are very well contained for both the motorcycles. However, unlike the case earlier, the Apache 200 feels much more refined than the Pulsar NS 200. Both the motorcycles get only the carb option with their ABS variants (no non-ABS FI for the Pulsar though), leaving not much of a choice for buyers. 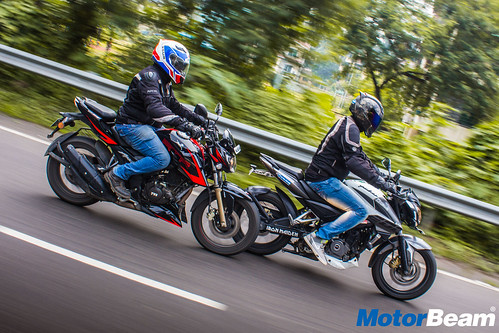 Riding Dynamics – Even though the ergonomics are similar, both the motorcycles ride in a different manner. Both the bike have different frames too and this adds a lot to the riding dynamics. The Syncro Stiff chassis of the Apache makes it very nimble around the corners. While the Perimeter frame of the Pulsar gives it great straight-line stability. The Apache 200 has a very well sculpted tank where one can lock their knees nicely. However, if you are any taller than 6 feet, you won’t find a comfortable spot on the Apache. Here, the Pulsar NS 200 comes into play as taller riders can lock their knees to the tank. They can find a comfortable spot, although it might not be as confidence inspiring as the Apache. 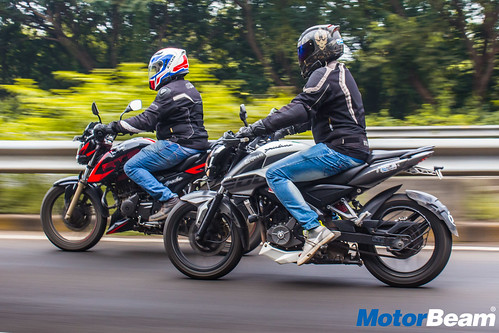 The Apache 200 is more suited for corners and canyons

The Apache 200 get only Remora tyres with the ABS variant while the Pulsar NS 200 gets only MRFs. Both the tyres provide decent grip and enough confidence in the wet as well as dry. However, the brakes on the Apache have better feel and feedback than the Pulsar NS 200. The Apache also gets a dual-channel ABS while the Pulsar gets only a single-channel ABS. The Apache has better mirrors too, even with a jacket on, the rider can see what’s behind. The Pulsar, however, manages to be more manoeuvrable as the Apache’s handlebar has less turning angle. 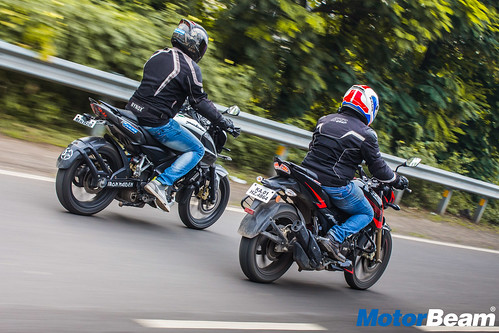 Verdict – Both the Pulsar NS 200 and the Apache 200 Race Edition have a very competitive pricing. Appealing to the youth, both the motorcycles are hardware rich. The Apache has dual-channel ABS while the Pulsar is more suited for taller riders. The Apache gets a slipper-clutch while the Pulsar gets an extra gear. There are little differences and to pick one here is going to be some compromise. The Pulsar might look dated yet it packs a lot of power while the Apache maybe slow but it is one hell of a looker. Picking one of the two will be solely based on rider preference but there is no denying that the Apache 200 is the better all-round bike here. 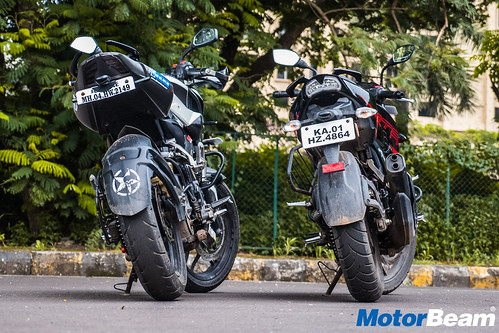 Even with slight differences, both these motorcycles are super fun to ride

“I was quite surprised that the Pulsar NS 200 has started to show its age. A brilliant bike but the updates by TVS to their Apache 200 has made it quite a spectacular motorcycle in the segment. A single-channel ABS on the Pulsar NS 200, that too at a higher premium, makes little sense to me and with TVS offering a whole lot more and better dynamics, it’s the 200cc bike which I find more appealing of the two. Still, no beating the Pulsar when it comes to outright performance.” – Faisal Khan, Editor, MotorBeam.
Pages: 1 2