The Range Rover SVR is a nuclear bomb, it’s heavy yet fast as a missile & can off-road too

The love for SUVs across the globe isn’t just limited to those seeking practicality but even those who are into performance. Land Rover makes the most capable of SUVs in the world and if any other manufacturer can come close, it’s Jeep. We all are in awe of the Grand Cherokee SRT which is proof that lugging weight around shouldn’t be a problem if a V8 powered fire-cracker is under the hood. Same is pretty much the case with the Range Rover Sport, which although more agile than the standard Range Rover, wasn’t as sporty as one would hope, till the SVR came along. How much of SUV madness is the Range Rover SVR?

Motor Quest: Jaguar Land Rover started its ‘Special Vehicle Operations’ in 2014 and announced the Range Rover SVR in August the same year. SVR stands for Special Vehicle Racing and is to JLR what M is to BMW. 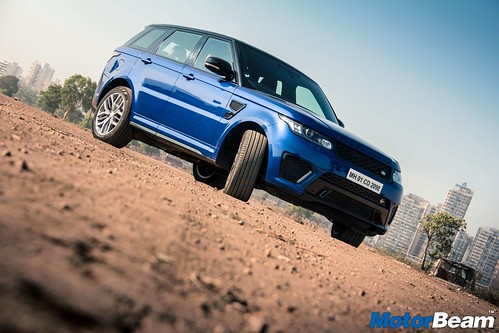 Exteriors – The Range Rover SVR is based on the Range Rover Sport and that itself is a very attractive looking SUV with the typical Land Rover styling cues. On the SVR though, there are sporty elements which amplify the Sport in the vehicle’s name. The front bumper is new and gets a large air duct for better airflow to the powerplant while the grille is painted black. The ducts on the front fender are also revised and get black finishing while the rear bumper is new too with the lower half finished in gloss black, twin exhausts on each side give a hint of what’s to come when you accelerate hard. 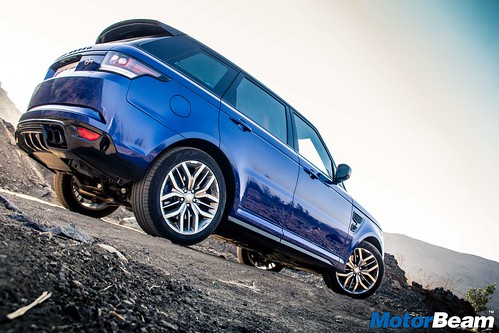 There are two SVR badges on this Range Rover, one on the front bumper and the other on the rear tail gate, the obvious giveaways about the identity of this go-fast British SUV. From the side, the big 21-inch alloys catch a lot of attention while this racing blue shade gives the SVR its identity as the performance variant of the British brand. So while the SVR doesn’t stand out loud as a performance vehicle, the changes to the exteriors does reflect the motive of this even sportier Sport. 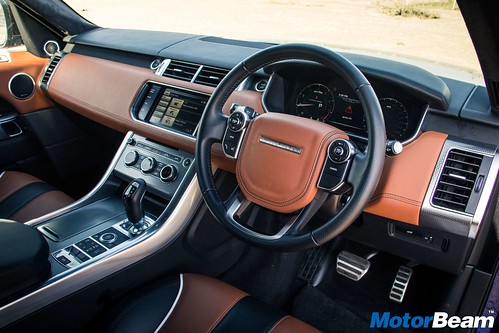 Interiors – Once you step inside the Range Rover Sport SVR, you will immediately appreciate how Land Rover has brought together luxury and sportiness in a subtle manner. The interior is bathed with leather, of course and while most of the cabin remains the same as the regular model, the SVR gets sporty seats for obvious reasons. The front seats are similar to the F-Type’s and offer terrific comfort when you floor the pedal of this big bad beast while the rear seats are made to look similar as the front, cushioning being just right with ample headroom, kneeroom and legroom inside, under-thigh support being good too. The front seats are 16-way power adjustable and have memory setting, the SVR logo is embossed on the upper part of the Oxford perforated leather. 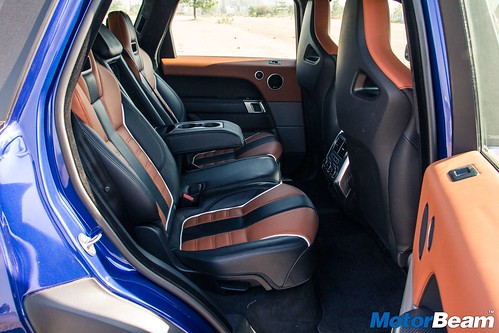 The Range Rover SVR has sporty seats! The front ones are from the F-Type!

The dashboard of the Range Rover SVR gets carbon-fibre finishing near the side AC vents, centre console and power window switches on the door. Our test car was equipped with dual-tone black and maroon finishing which looks rich. The analogue meters have been ditched in favour of an all digital unit from the flagship Range Rover but save for that, the rest of the car remains the same with a ton of features on offer and quality levels which are quite good. The B-pillar hides the SV badging behind the doors. The only gripe we have with the car is the infotainment system as it’s not very intuitive to use. 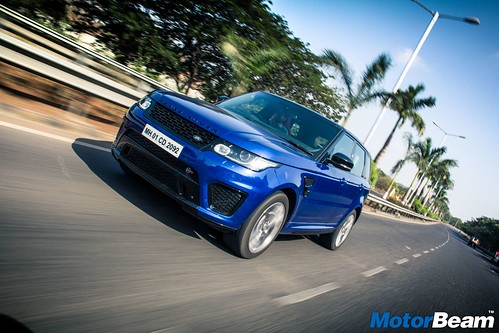 The supercharged V8 engine is a complete monster ready to explode

Performance – The Range Rover Sport SVR is the most powerful Land Rover ever. It is powered by a 5.0-litre supercharged V8 engine that belts out 550 PS of power between 6000 to 6500 RPM and 680 Nm of torque between 2500 to 5500 RPM. 0-100 km/hr comes up in a claimed 4.7 seconds (we managed 5.29 seconds on our VBOX) while the top speed is 260 km/hr. Now the figures look astonishing on paper and they are because the exact same engine, with the same output numbers, does duty on the Jaguar F-Type Coupe R. This is no ordinary engined SUV, something is very special here. 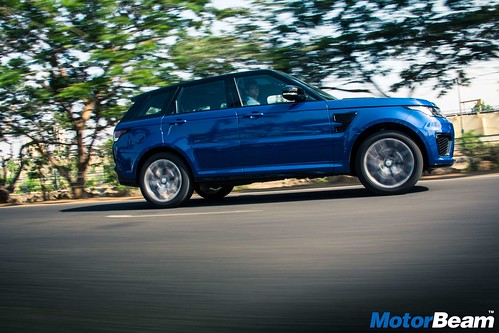 The sound from the quad exhausts is music to the ears

The Range Rover SVR is an SUV but gets active exhausts and 550 eager horses!

Turn on the car and it makes it amply clear about its intentions with a growl. Get moving slowly and everything feels calm and in control, there being good amount of low-end punch to crawl in the city and look like just another regular Range Rover Sport. But hit the open road and the SVR transforms its character. It’s no longer calm or laid back, it just goes like someone has ignited a dynamite at its rear. This Range Rover Sport has an addictive mid-range with a top-end which can make you giggle like a 2-year child. Even with fat 275 mm tyres on each wheel, the SVR torque steers quite a bit (that with the traction control on). 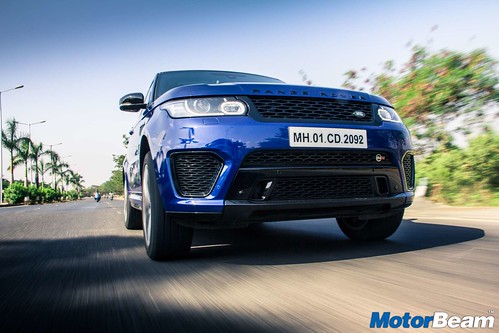 The sound from the motor at full pelt is amazing, further amplified when you dab the active exhausts button on the centre console. 100 km/hr comes up in third gear and while in normal driving mode, the cluster lights up and redline comes in at 6500 RPM. Get into dynamic mode and the 8-cylinder mill redlines at 6700 RPM. In fact, the SVR does 67 km/hr in first, 99 km/hr in second, 146 km/hr in third, 183 km/hr in fourth and whizzes past 200 km/hr in fifth. There are 8 cogs courtesy of ZF and the transmission is quick in shifting gears but not as quick at low speeds. 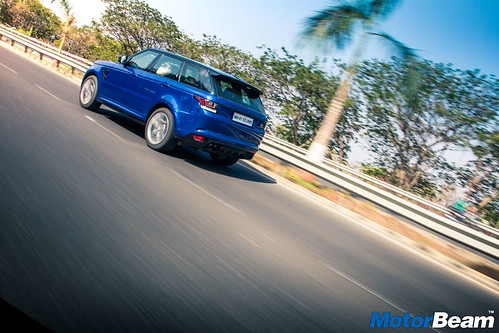 The SVR takes off with mind numbing acceleration and sound

One can take over manual controls using the steering mounted paddles or the gear lever which isn’t rotary unlike its elder and younger siblings. If speed is not all what you seek, you can drive calmly too with the tachometer reading just 1500 RPM in top gear while doing the ton. Weighing a hefty 2.3 tonnes, this 8-cylinder powered Range Rover Sport SVR is as thirsty as you would expect, returning a mileage of 3-4 km/l. The only respite is the big 105-litres fuel tank which ensures you don’t hit the fuel station after every spirited run. 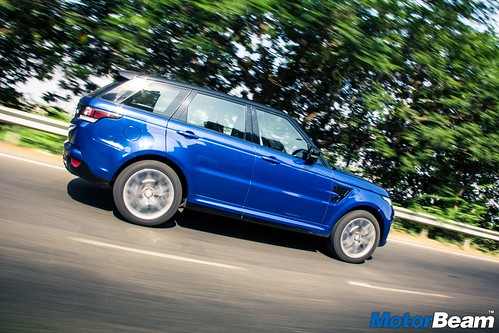 In spite of the weight, it’s still a whole lot of fun to drive around corners

Driving Dynamics – The Range Rover SVR is the sportiest of all Land Rover vehicles, it did the Nurburgring in an impressive 8 minute 14 seconds. But one can’t defy physics, the SVR is a heavy car with a height which does affect its handling as there is quite some body roll. One can feel the weight around the corners and while the steering is feedback rich, it could be a bit lighter in weight (not feel) with more sharpness for added confidence around the bends. The driver being seated high-up, doesn’t help matters much when it comes to handling. 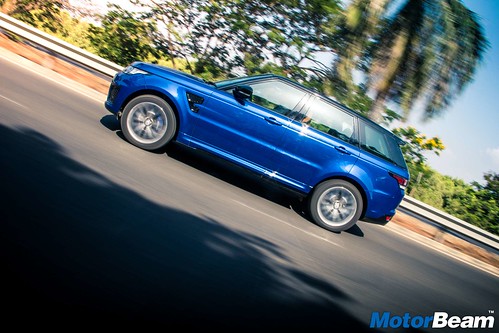 The Range Rover Sport gets the company’s Terrain Response System 2 and for the SVR, there is a Dynamic mode which lowers the car and stiffens the air suspension which has already been tweaked for a more agile drive. In spite of being stiffer than the regular Range Rover Sport and running on massive 21-inch wheels, the SVR still rides quite well. It’s very stable at speed and the brakes have ample power to stop this SUV with confidence. Being a Land Rover, it can literally go anywhere although one needs to go light on the throttle as the temptation of that V8 is difficult to contain, even off tarmac. 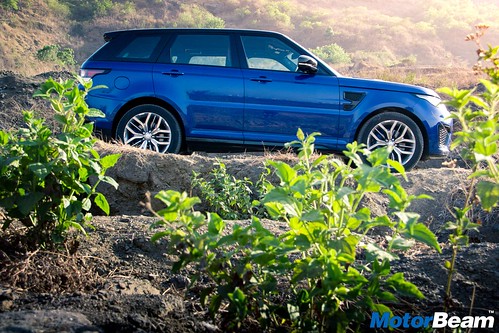 Safety and After Sales Service – As far as safety goes, there is a lot of it in the Range Rover Sport SVR. EBA, ABS, DSC, CBC, ETC, HDC, EBD, FCAS, GAQ, RSC, GRC are just some of the acronyms listed on the Land Rover website. These are of course electronics which ensure the SVR stays under control at all times and on all terrains. That’s not all, there are side, seat-front, pelvis and thorax airbags for the driver and passenger. Land Rover’s service in India is the least impressive among luxury car manufacturers, they are the last to enter the Indian market as well. 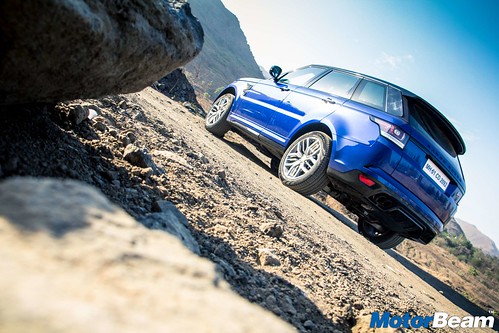 Verdict – The Range Rover Sport SVR isn’t a hard-edged sword, it likes to be the jack of all trades. There is oodles of performance on offer which will keep you entertained on the straights always. Besides the added performance, the SVR looks even better than the standard model and carries the same luxurious interior which is loaded with a ton of features. This Land Rover, like most others, doesn’t come cheap but if you own a fuel pump or are entitled to fuel reimbursements, there is no better way to burn the tarmac and then off-road too. 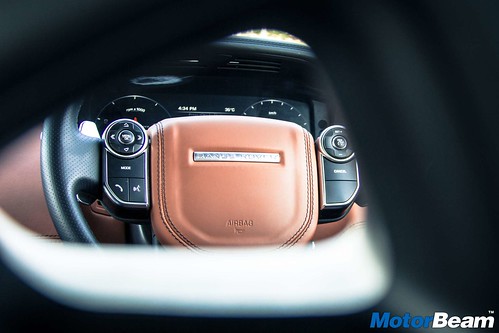 * Stupendous straight-line performance, takes off, literally
* Loaded cabin with appealing interiors and a lot of equipment
* Ton of electronics for a better drive experience
* Fun to drive SUV which can also do off-roading with ease
* Fastest Land Rover, the most appealing looking too 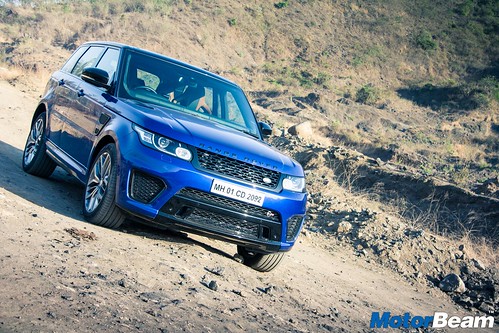 Brought in via the CBU route, the SVR is an expensive vehicle 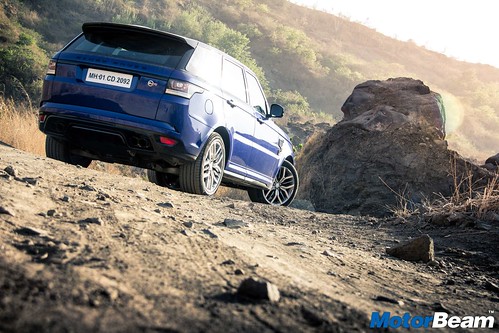 The fastest Land Rover till date is also the sexiest

“I have always been in awe of the petrol powered Range Rover Sport but Land Rover’s SVO division went a step ahead and made the V8 powered SUV even crazier with the SVR. This vehicle has everything one needs, provided one can afford to buy and run it. An all-rounder in every way, the Range Rover SVR can blast fast on the highways, do the urban crawl, take the less beaten path and still not throw up a fit. It might just be the fastest Land Rover but to me, it’s the best Land Rover yet.” – Faisal Khan, Editor, MotorBeam.
“Supercharged V8, 680 Nm of torque and the fastest Land Rover yet, need I say more. The SVR is one heck of a machine and one of the finest to come out of the Land Rover plant. Not only did it impress with its exhilarating performance but its go-anywhere attitude is just icing on the cake. I loved the well laid out interiors and it looks fab in this particular blue shade. It may be an expensive proposition but it tugs the heart strings like no other.” – Javeid Khan, Deputy Editor, MotorBeam.