The facelifted Renault Duster joined the MotorBeam long term fleet a few months back and Javeid has been driving it. It’s equipped with the Easy-R AMT automatic gearbox which means everyone else in the team pretty much stays away from this compact SUV, afterall, we love our stick shifts. Last week, I planned a trip with my friends to Shillim (ahead of Lonavala) and took out the long term Ford Figo. 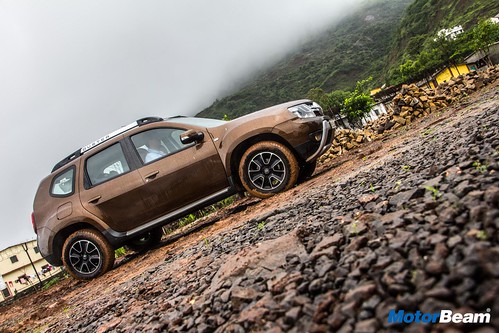 The Renault Duster, in spite of its age, doesn’t look dated anymore

Just after leaving the house, I encountered a bad pothole and even though speeds were less, the Figo’s front left tyre immediately deflated. A quick 10 minute workout to swap it with the stepney and a quick visit to the near tyre repair shop resulted in the punctured tyre deemed useless, it had multiple cuts along the sidewall and couldn’t be repaired. As desperate times call for desperate measures, I was left with no option but to swap the Figo with the Duster and boy what a right decision it was. Because en route, I encountered such bad roads that the Figo’s other tyres too would have given way. Most of us question the compact SUV category, believe me, that very day changed my perception completely. 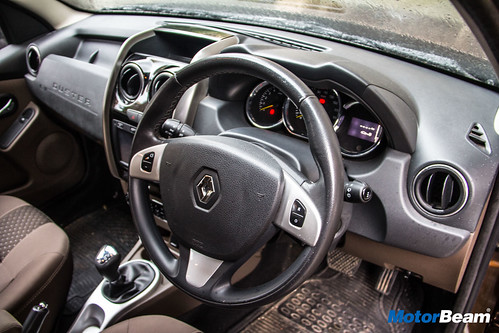 You see, road builders have been cheating the public since a long time by making sub quality roads and every year as soon as the monsoon arrives, roads in Mumbai are akin to the craters on the moon. It’s at such a time that you realise that a car with a good ride quality and high ground clearance is the need of the hour and somehow under the Rs. 20 lakh price bracket, no other vehicle feels as indestructible as the Renault Duster (Tata Safari Storme aside). The ride quality of the Duster is just phenomenal and it glides over most roads, heck, you can even drive over a series of potholes without having to worry about the tyres getting punctured or cut. While the Hyundai Creta too has a good ride, it can’t match the French vehicle in the handling department, so if you are looking for ride and handling balance, look no further than the Duster. 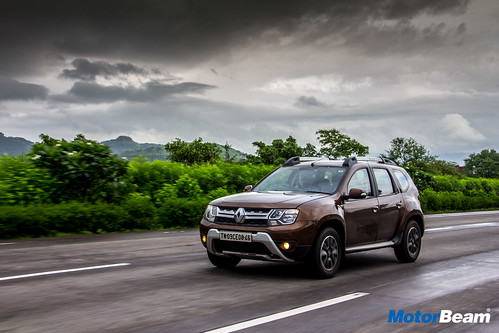 The AMT is the choice, only and only if you want an automatic, not for enthusiasts

The facelifted model does look better than its predecessor but all those tweaks on the exterior haven’t uplifted the car’s persona much although the blackened alloy wheels do give it a sporty feel. Step inside, the improvements are much better, the cabin no longer feels cheap and build to a cost although it still doesn’t feel premium enough as expected at this price. It definitely could do with more equipment considering how hatchbacks costing half the price offer more features.