Royal Enfield hardly puts a foot wrong these days. If at all, the company can only be blamed for not anticipating the demand for its models and planning the production accordingly. Much to the envy of competing brands, Royal Enfield has struck jackpot with every new launch and each model in the lineup carries waiting lists varying from a few days to as long as 5 months. So, when it was first unveiled at the 2012 Auto Expo, the Thunderbird 500 was expected to carry the legacy forward. Now that it is launched in the market, let’s find out if it matches our expectations.

Styling – When the Thunderbird was first launched in 2002, it marked a departure from the usual design trend of Royal Enfield. The Thunderbird was the first, and till date, the only motorcycle from the company that shed the classic ‘retro’ design and tried to look modern. Competing in the cruiser segment helped, as the Thunderbird came with design and proportions that were different from the other models in the line-up. Rest, as they say, is history. Since then, Thunderbird has been a big success for Royal Enfield and its sales never waned until the production was stopped a few months back to make way for the new model.

Why fix something when it isn’t broken? That is exactly what Royal Enfield thought too, as the Thunderbird 500 is more of an evolution of the original than an altogether new design. 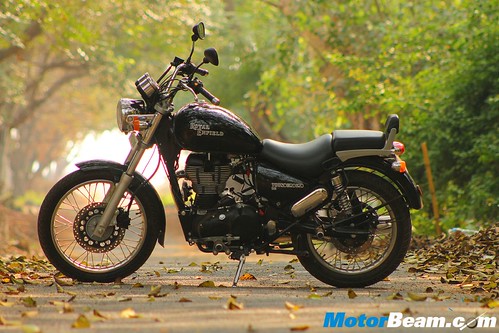 The basic shape is carried over and the new model is instantly recognizable as a Thunderbird. What sets the Thunderbird 500 apart though are the modern touches that has been brought into the mix. The headlight, for example, is an instant attraction that grabs many an eyeballs. The projector lamp housed inside a rather cheeky-looking LED ring looks good and works great too. The profile has been kept largely unchanged except for the shape of the seats and the badges which are now three-dimensional. The taillight steals the show at the rear with 5 streaks of Light Emitting Diodes weaving their magic. We would have preferred a better-shaped and slightly bigger lens for the LEDs though. 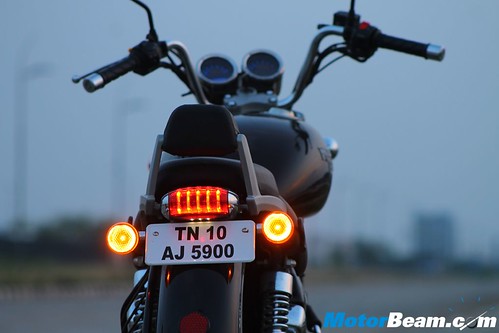 There is no dearth of bling factor with the instrument cluster, suspension springs, exhaust pipe and shrouds for headlight, taillight and indicators, all finished in chrome. The engine and transmission casing is now painted in black and adds to the visual appeal. The edges of the fins that aids in engine cooling are finished in a contrasting silver, which is pleasing to look at. The fuel tank of the Thunderbird 500 is huge and muscular with an offset filling cap that looks a bit odd. The individual seats and the backrest are shaped superbly and flow with the design of the bike. The pillion seat can even be removed in case you need additional luggage space on one of those long solo rides. 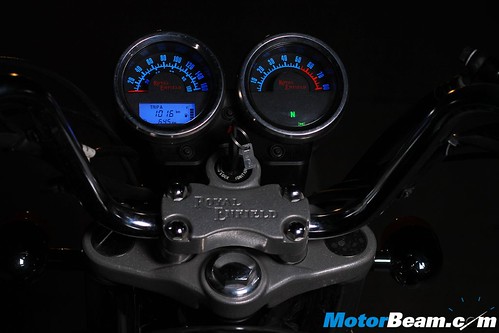 Instrument Cluster and Switch Gear – At first glance, you will be hard-pressed to associate this instrument cluster with a Royal Enfield, what with its permanent blue back-lighting and LCD digital display. Beneath these modern touches are the familiar twin circular pods finished in chrome. While the left pod houses the speedometer, digital odometer and twin trip meters, the right pod houses the tachometer and other tell-tale lights. Surprisingly for an Indian bike, speed is indicated not only in kilometers per hour, but also in miles per hour. 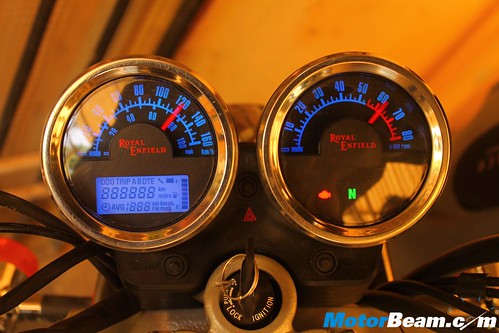 The LCD panel in the cluster also incorporates provisions for displaying data like average fuel-efficiency, service due warning and hazard light indicator, all of which are featuring in a Royal Enfield motorcycle for the first time. The only grouse that we had was the difficulty to decipher data in bright sunlight, which might prove to be a big distraction on the move.There is a vast improvement in the quality of switches used in the new Thunderbird and this is quite apparent in the engine kill switch, which is chunky to operate and is finished in bright red. There is still room for improvement though like, for instance, the buttons for hazard lights, mode selection and reset, which look and feel flimsy.

Performance and Gearbox – The new Royal Enfield Thunderbird comes in both 350cc and 500cc variants, the latter of which is all-new and was sent to us for testing. This engine is the same 499cc, single-cylinder, air-cooled, 4-stroke, twin-spark unit that powers the Classic 500. While the power output of 27.2 bhp and a peak torque of 4.17 kgm might not look impressive for a 500cc motorcycle, the Thunderbird doesn’t let you down on the road. Turn the ignition on and the trademark thumps fill the air. Rev the engine hard and the exhaust note gets ballistic as you near the redline. 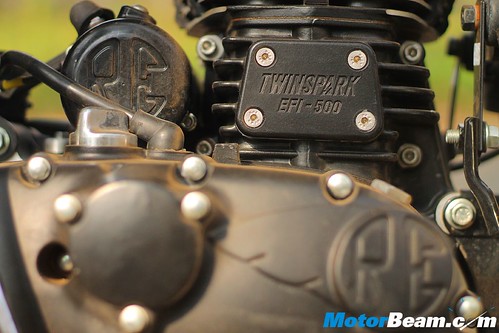 When we last experienced this engine in the Classic 500 Desert Storm, we appreciated its excellent low and mid-range. The Thunderbird 500 is no different. Abundant power and torque is available at a flick of the throttle in all gears which makes the Thunderbird 500 extremely comfortable to drive both in stop-start city traffic and on an open highway. Brought almost to a standstill once due to a pedestrian who decided to cross the road all of a sudden, we were able to continue riding in third gear with barely any knock. Now, how many 150cc motorcycles possess that capability? Though the indicated top speed is 130 km/h which we didn’t get to test, the Thunderbird 500 feels comfortable in speeds between 80 to 90 km/h, when all the moving parts seem to be in perfect harmony with each other. 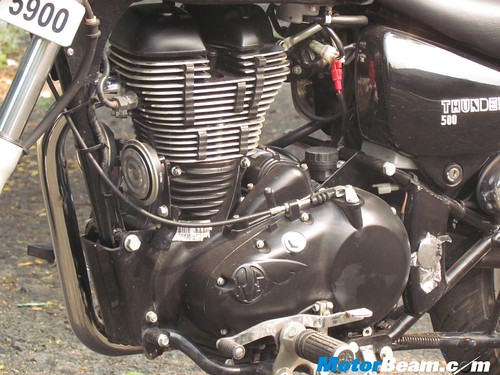 The 5-speed gearbox shifts in a 1 down, 4 up pattern. While the gear ratios are well placed, the gears shift with a clunky noise that Royal Enfields are famous for. Though the clutch isn’t hard, it requires some effort to slot the gears into place and false neutrals kept engaging while shifting down. The average fuel efficiency during our 120-odd km test ride was 26 km/l, but expect this figure to go up significantly if you don’t push the bike in higher revs like we did for most part of our test. With a tank capacity of 20 liters, the Thunderbird has a superb range, making it ideal for long distances.

Riding Dynamics – The new Royal Enfield Thunderbird comes with split seats for the driver and the pillion rider. While the former gets a nicely-shaped saddle wide enough to accommodate even bigger frames with ease, the latter compensates the lack of width with a perfectly-placed backrest that offers support at the right places. But, there were a few complaints about the front seats not being comfortable from certain riders. The Thunderbird 500 comes with telescopic forks up front and dual gas-charged shock absorbers at the rear. The ride, as a result, is plush and the Thunderbird doesn’t throw you around over potholed roads. The footrests are ergonomically perfect which makes riding the new Thunderbird a pleasure. Having said that, you don’t really end up stress-free after a ride as the vibrations from the engine make their presence felt on your body after a certain distance. But, it has to be said that the vibrations are a whole lot better than the Classic 500. 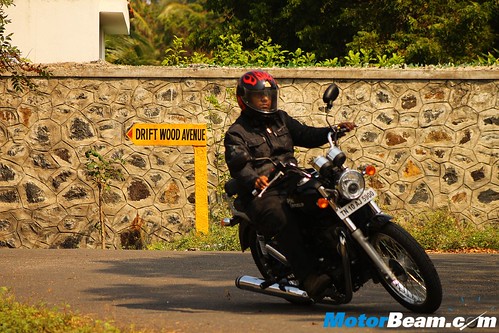 Just like the earlier Thunderbird, straight line stability is excellent and the Thunderbird 500 stays glued to the road even in speeds in excess of 100 km/h. With a kerb weight of 195 kg, we didn’t expect the Thunderbird 500 to impress us with its cornering capabilities. But to its credit, the Thunderbird 500 maintained its composure on corners better than expected. Unlike the earlier model, handling is pretty much predictable and you don’t feel jittery taking the corners at a reasonable pace. Inside the city, the new Thunderbird does feel heavy to manuerve, but again, it surprised us with its agility. Do not expect it to beat a Yamaha R15 or Honda CBR in handling though. This belongs to a different league and needs to be treated that way. 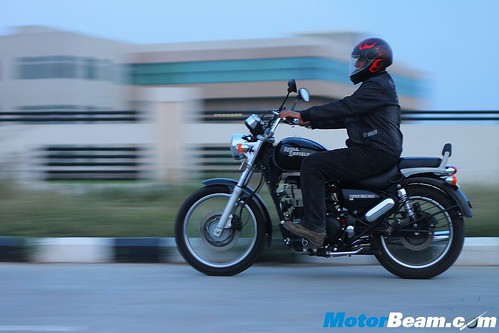 Despite possessing disc brakes in both wheels, braking leaves a lot to be desired. The brakes lack bite and the bike doesn’t seem to lose speed urgently. Moreover, the test bike generated strange noises from the discs every time the brakes were applied. This is one particular area where Royal Enfield has a lot of work to do. 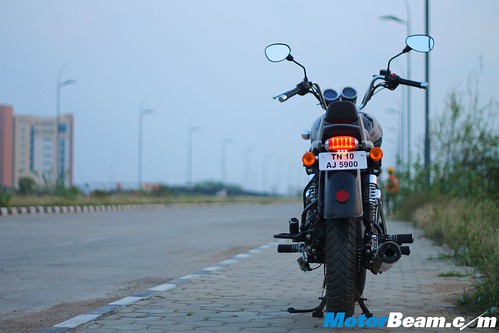 Verdict – The Thunderbird 500 is, in more ways than one, a dream come true for Royal Enfield aficionados. With good looks, plush ride and superb stability on the highways, they have always embraced the Thunderbird. With this refresh, Royal Enfield has brought in some much-needed modern touches and a host of other features including an all-new 500cc engine, making the Thunderbird one of the best cruisers available in the market.

But, with an asking price of INR 182,571 (on-road Mumbai) for the 500cc variant, the Thunderbird is now ‘the most expensive’ motorcycle manufactured by Royal Enfield, thus losing its ‘value-for-money’ proposition. And that makes it vulnerable to the competition. Do not worry, you still have the Thunderbird 350 at INR 143,000 (on-road Mumbai) which comes with all that is available in the 500 sans the engine. 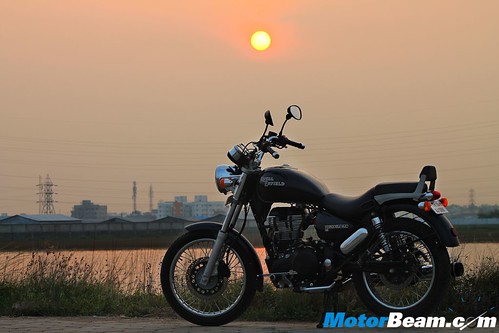 RE Thunderbird Modified As A Huge Cruiser!