Priced over Rs. 2 lakhs, Thunderbird 500X is the most expensive RE motorcycle on sale in the country!

Starting off, this one is not the Royal Enfield the entire nation has been waiting for as the 650 Twins are still some months away from launch. Right now, what we have with us is one of the two new additions to the Royal Enfield Thunderbird range. Yes, we are putting the more powerful 500cc version named the Thunderbird 500X to its paces to determine whether it justifies its sticker price that stretches well over the Rs. 2 lakh mark when it comes to the on-road cost. Even without any mechanical changes when compared to its cruiser counterpart, the company claims it to be the “urban-geared rendition” of the original, but is it? Let’s find out!

Motor Quest: Introduced way back in 2000, Royal Enfield Thunderbird is a cruiser motorcycle that went through a transplant in 2009 to accommodate the relatively modern UCE engines. In 2012, the Eicher-owned company came up with new models that featured refreshed styling, more features and improved mechanicals. This year, Royal Enfield Thunderbird X range, consisting of the 350X and 500X, has been launched to appeal to the millennials. 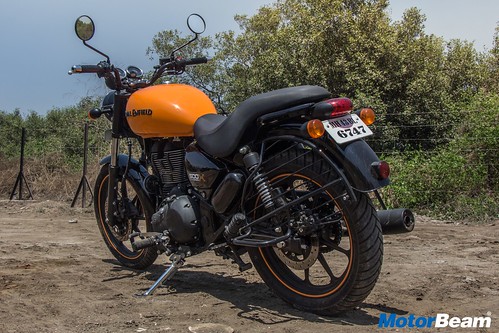 Subtle details such as the chopped fender add to the modern stance; don’t miss the rim stripes

For the unsuspecting, the Thunderbird 500X can easily pass off as a custom-built motorcycle

Styling – Thanks in no small part to the all-blacked out theme and pop colour options, the Thunderbird 500X looks fresh, youthful and snazzy on our roads. Even in the busy urban scenario, this motorcycle is an attention-grabber due to its massive exterior dimensions of 2040 x 840 x 1140 mm (length x width x height). Leaving no stone unturned to put it as a whole-hearted approach, the Bullet-maker has offered 9-spoke alloy wheels and tubeless tyres as standard. Besides that, the headlight bezel now gets a smoked effect, the seat is a single-piece unit while the handlebar is flat and short. However, the exposed wiring at places and underwhelming fit & finish levels play spoilsport in an otherwise well-executed attempt. 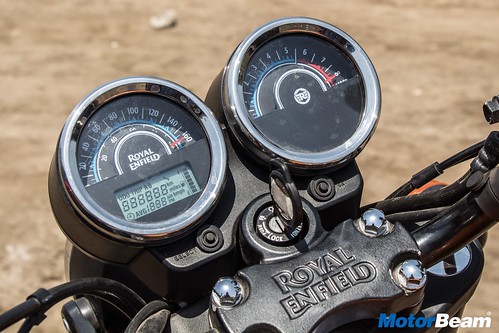 The console is unchanged, and the same can be said about its vibrations also!

Instrument Cluster and Switchgear – Royal Enfield Thunderbird 500X carries over the same analog-cum-digital instrument console from the standard Thunderbird with a small MID sitting beneath one of the dual chrome-ringed pods. Like before, the left pod features a speedometer and a digital display while the right one houses a tachometer and other tell-tale lights. Apart from the obvious km/hr reading, the speedometer also continues to show the speed in miles per hour. The digital display throws out information related to fuel level, average speed and time as well, along with a service due warning. While the handlebar gets new grips, the good quality switchgear has been carried over from the standard Thunderbird. Besides a couple of dubious buttons to fiddle with the cluster, this one comes with a choke lever too. What’s more? The unit does a cool self-check on start-up! 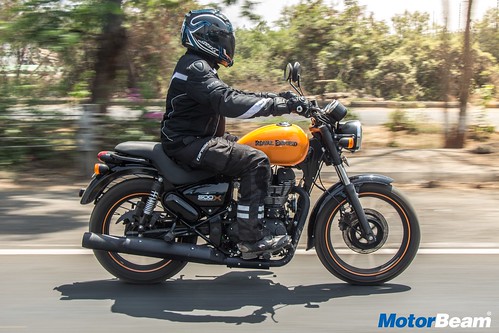 As can be inferred from this picture, the handlebar makes a world of difference to the riding position

Ergonomics – Aiming to target the energetic youth with this model, Royal Enfield was quick to realise that the relaxed stance wasn’t going to make the cut. Hence, what we get here is a flat handlebar, a new seat without the useful pillion backrest and sleeker grab rails. The handlebar now sits at a more natural height (and in a natural way) that allows the rider to sit in a more committed position, which is more in the league of commuter motorcycles. To top it off, the footpegs are front-set which doesn’t rob you much of the Thunderbird’s characteristic laid-back feel. Talking about the single-piece seat, it has a well scooped-out and sufficiently-padded part for the rider while the pillion area is, in relative terms, a slight compromise in terms of space and comfort. However, the Thunderbird 500X still flaunts a good ergonomic balance when compared to other motorcycles.