Performance – As we told you earlier, the Thunderbird X range witnesses no mechanical changes in either of the two displacement versions. The beast in our possession puts a 499cc, air-cooled and fuel-injected motor to good use to develop 27.2 BHP of power and 41.3 Nm of torque. This single-cylinder motor comes paired to a 5-speed gearbox for which we will swank about later. As if the unimpressive on-paper specifications weren’t enough, the Thunderbird 500X weighs 197 kgs which further takes a toll on real-world performance. Its one saving grace is the plentiful torque available right from low RPMs to play around with. This results in commendable tractability in moving traffic as the engine responds well to throttle inputs without needing frequent downshifts. In fact, the Thunderbird behaves very similar to any other motorcycle at city speeds of upto 60 km/hr. Beyond that, this so-called urban cruiser has an entirely different story to tell. 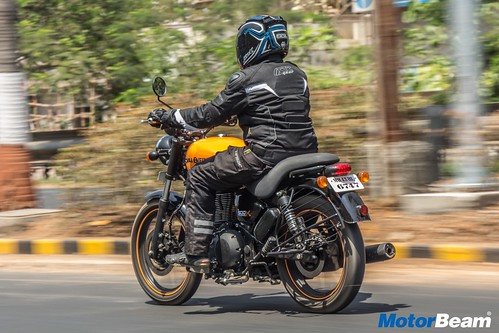 Despite its sporty makeover, this motorcycle remains a very capable cruiser

Once you cross 60 km/hr, the bike tends to get out of its comfort zone with an enormous surge in the intensity of mild vibrations you had been facing till now. As you push it to the 5500 RPM redline, the thumping note from the exhaust pipe gets pretty vocal and the vibrations become unbearable. With a sweet spot at around 80 km/hr, it’s best to adopt a sedate riding style on the highways and enjoy the thump! While the clutch lever operation is manageable, it is the gearbox which will leave you in disdain. Facing false neutrals is a chore and the shifter feels so clunky to operate that you have to literally kick through the gears at times. That said, the Thunderbird 500X is quite frugal going for close to 30 kms on a litre of fuel. That, coupled with its humongous 20-litre fuel tank, makes it a go-to option for those in need of a long-distance cruiser. 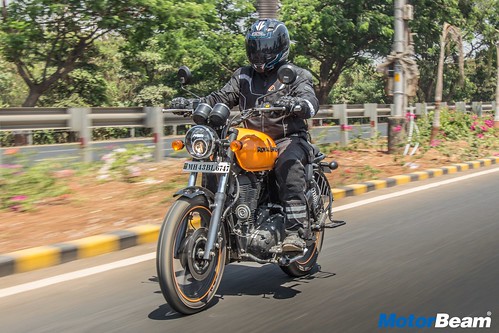 Rear-view mirrors are rendered useless because of engine vibrations

With a soft suspension setup, ride quality on the Thunderbird 500X is really sorted!

Riding Dynamics – One can’t expect much from the Thunderbird 500X considering that the motorcycle it has evolved from is an out-and-out cruiser sitting on a down tube frame. However, the new handlebar has made it a lot more easier to tip this one around corners. Moreover, the riding position now allows one to exercise greater control over the motorcycle which results in greater stability across sweepers and amidst crosswinds. Suspension setup comprises of telescopic forks up front and twin shock absorbers at the rear. This motorcycle is softly-sprung which makes it apt for the purpose it’s intended for! Although the front end is a bit twitchy when exposed to hard cornering, the bike just eats up road undulations and broken patches without breaking a sweat. MRF tyres perform their job quite well. Braking power from the disc brakes is adequate for the kind of speeds the Thunderbird is capable of but there’s no denying the disconnected and wooden feel when operating the brakes for slowing down.