Grit – The raw endurance, perseverance and passion that keeps you going

How often do Indians get into racing? Not much right, and those who participate are the very few who take it forward as a career. We’ve seen so many events of track racing and I’ve participated in a few too. TVS and other companies have been providing us a great approach, by having a hands-on experience. As we all know TVS is into racing since 35 years and from the last few years, it’s been participating in the Dakar Rally too. TVS Racing along with Sherco Racing invited us for the announcement of their rider for the upcoming Dakar Rally. Well, we had a surprise in our bag as there was a track experience on the next day. 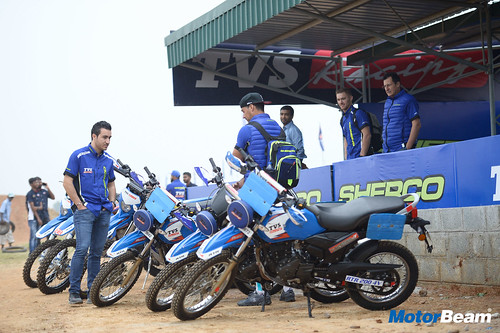 Unlike any other track experience, for the first time, there was a Supercross experience for the media. One of TVS’ plants on the outskirts of Banglore has an in-house Supercross-Motocross track. The place where people are trained for Motocross racing. As this was going to be a first time experience for most of us, we had the TVS-Sherco Dakar riders guide us through the track. We had two bikes, the RTR 450 FX and the RTR 200. The RTR 450 is developed like an enduro motorcycle but the RTR 200 is the Apache 200 completely ripped for dirt riding. 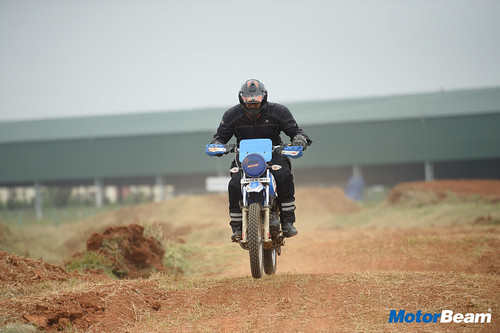 Some got to ride RTR 450 for the first lap while I went out on the RTR 200. First was the sighting lap and we had to follow one rider on the TVS-Sherco Dakar 450 motorcycle. With a series of twist and turns and just grit all around, riding on dirt is different and difficult. However, I made the two laps go easy and went full out on the final lap. As we were not experienced enough to ride on a Motocross track with all the jumps, we had to follow the Supercross path which went around the jumps. And oh boy! all of us were just sliding over the place. There were just two jumps that were mandatory to be taken and I had a good amount of airtime in the last one. Yes, I almost dipped the front and hurt my shoulder a little. 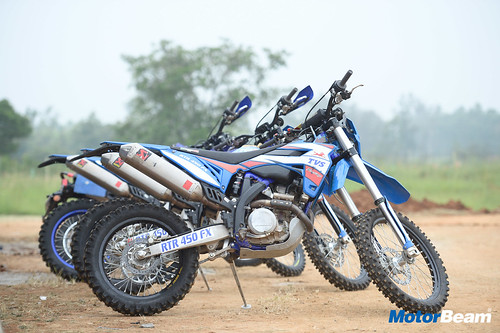 The RTR 450 FX in complete flesh

The RTR 200 was the same road going Apache 200, just that it had lost so much weight and hence it was super fun on the track. It was equipped with off-road tyres but did not have knobbies that do the job on such a track. Riding the RTR 200 itself was a lot demanding on a dirt track. However, after the first session, Aravind KP, the one representing India and TVS-Sherco in the Dakar rally taught us a few techniques. Main was the body positioning and throttle control. In racing there’s a rule, you are never in the middle. You either accelerate or brake, you would lose time, traction and be tired if you let idle for any moment in between.