India and China concur more than half of the worlds population. The two countries differ on most criteria, be it food, culture or cars. Each of them have their own favourites and when it comes to hatchbacks, it’s no different. Maruti Suzuki Swift has been a segment best seller since the time it was launched almost 7 years ago. The newer generation model follows the same fan following and many have tried but have failed to dethrone it from its número uno status. Likewise, the Chevrolet Sail U-VA has been the chart topping car in China, selling close to 30,000 units every month. The Sail is soon going to be launched in India and GM agrees that the Maruti Swift is going to be its biggest rival. We pit both these top sellers against each other and find out who will take top honours. 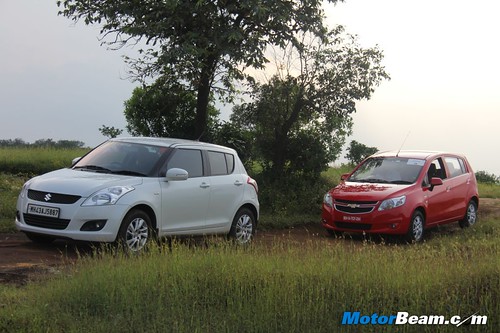 Styling – The Chevrolet Sail has been jointly developed by GM and SAIC of China. Practicality supersedes any other quality in the particular region and this results in the Chevrolet Sail U-VA having a very bland exterior design. It takes time to grow on you but it’s no match for the Swift’s sporty attire. The Maruti Swift looks far more attractive and most will agree with this. However, head on the Sail does have striking resemblance to the Cruze with its wrap around headlamps and the family front grille, which is a good thing. The vertically stacked tail lamps look a bit old fashioned and from the side profile the car seems to end rather abruptly. In the Swift’s case, the character lines and curves give it a more premium look and add to sportiness. 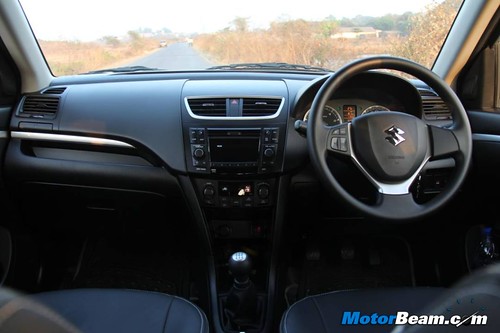 Interiors – Get inside and and there is a marked difference here too. The Maruti Suzuki Swift sports an all black dashboard while the Sail gets two tone beige finished dashboard. Picking one out of the two would be wrong as its an individual choice. The plastics however feel better on the Swift while fit and finish is on par with both these cars. The steering looks better again in the Swift as the Sail gets no chrome treatment with the steering. Even the Chevy logo is inscribed in plastic, a bit of chrome would have certainly amplified the feel. 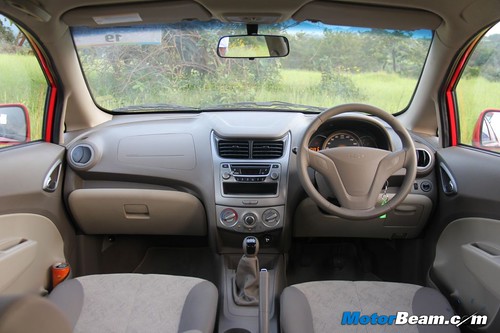 Interior space is where the Sail scores over the Swift and by quite a margin. The rear seat of the Chevrolet Sail is more comfortable and has more of a ‘sofa feel’ as compared to the Swift’s upright rear seats. The glass area is generous too, making the Sail feel more roomier. The rear windows on the Swift are very small and tend to make the passengers feel claustrophobic. The Sail outscores the Swift in the legroom, kneeroom and headroom department. The boot is bigger in the Sail and can swallow up large bags with ease. Furthermore, the seats can be folded flat in 60:40 ratio to create a more room, should you need it. The boot is more of a joke in the Swift. It’s smaller than the last generation model and even the seats don’t fold flat and do not have the 60:40 split option. The loading bay is higher in the Swift making it difficult to stow luggage, this is quite easy with the Sail. Comparing the top variants, the Sail misses extra goodies the Swift gets, such as automatic climate control, audio controls on the steering and drivers seat height adjustment. The Swift also gets a better audio system with better sound quality and an additional two front tweeters. Sound quality is average in the Sail U-VA. Both cars have provision for USB/AUX connectivity but the Sail has Bluetooth connectivity as well. 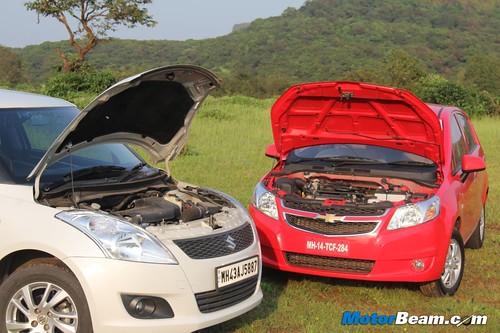 Performance – Both these cars are powered by the same diesel engine, well almost the same. The popular Multijet diesel engine was jointly developed by Fiat and GM. Effectively the Chevrolet Sail U-VA uses the same engine with minor India specific changes. GM uses a different turbocharger compared to the one used by Fiat and the engine is configured to Indian driving conditions, mated to GM’s own gearbox. The Sail produces marginally more power, 2 PS more to be exact. Maruti Suzuki has ruined the fun to drive aspect of the Swift by keeping the low end power very flat. 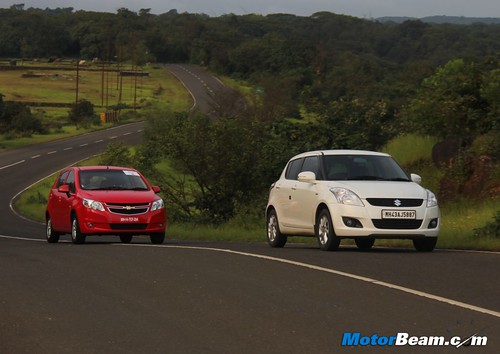 The Sail U-VA produces more low end torque and thereby is better to drive at low speeds, such as in slow moving traffic, etc. The midrange is pretty good too and is the Sail’s strong point but the high end is pretty flat. The Swift is exactly the opposite, there is hardly any low end grunt, which can make it frustrating in stop-go traffic. The mid-range and high-range of the Swift is good but you rarely get to the high end of the power band in city driving conditions. The fuel economy of both the cars is almost the same. The gearshift has shorter throws on the Sail and the gearbox is reasonably slick. The Maruti Swift is quite efficient too, as far as the gearbox is concerned. The petrol-powered Chevrolet Sail U-VA gets the same 1.2-litre engine from the Beat. This engine has decent performance but Maruti Suzuki’s 1.2-litre K-Series engine is an overall better option. 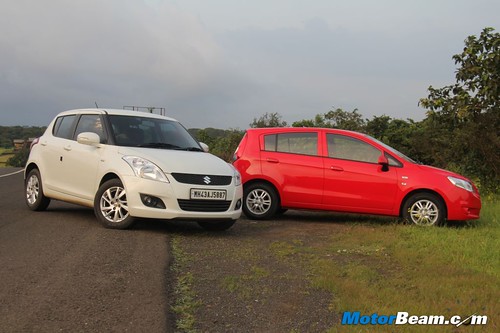 Ride, Handling and Braking – The Maruti Swift gets 15-inch wheels while the Chevrolet Sail U-VA gets 14-inch wheels. The Sail is superior to the Swift in terms of ride quality and takes up potholes with utmost ease, while the Swift’s suspension transfers a few into the cabin. The Sail feels comfortable even at the rear seat. Both the cars are very closely matched as far as high speed stability is concerned but the Sail just outdoes the Swift in this regard. The Sail handles very well but the steering has a very vague feel to it. The Swift on the other hand is very precise, with steering inputs. The Swift is more fun to drive but the Sail is much more planted to the road. Both these cars have ABS and EBD and despite narrower rubber, the Sail’s braking and pedal feel is better. NVH levels with both cars are very good, though at higher revs, the Sail is louder of the two. 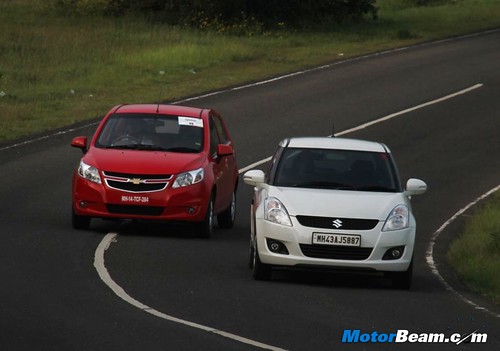 Conclusion – The Maruti Suzuki Swift is one of the best hatchbacks in India, but it was surprising to find the Sail U-VA bettering it on many regards. The Swift is definitely a better looking car inside out but the Sail U-VA is a more practical car, offering more space and better ride quality. The Sail U-VA is definitely not going to dethrone the Swift, but GM does have a winner on its hand with this spacious hatchback. GM is offering its 3-years no maintenance package and 5-years engine and transmission warranty on the Sail U-VA. However the pricing is not as aggressive as we had hoped for, making the Sail U-VA a tough choice in front of the class leading Swift. 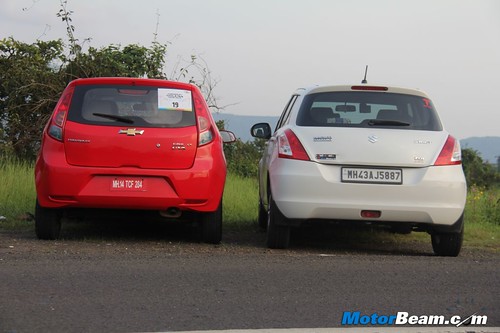