Competition in the 150cc segment has always been at its peak and there is just not one motorcycle which dominates the market but a multitude of them. That’s because the 150cc segment is wide and has sub-categories where people have preference for old and established models like the Pulsar 150 or the now discontinued Honda CB Unicorn 150. But on the other end, the youth is always ready to accept and experiment with new models. First it was the Yamaha FZ that ruled the roost and now it’s the Suzuki Gixxer, the favourite of young buyers in the country. Honda has finally given us a sporty motorcycle which isn’t commuter-ish, the CB Hornet 160R but can it beat the current kingpin of the segment?

Motor Quest: This is Honda’s third attempt at making an exciting 150cc motorcycle to please young commuters, the bike being launched in December 2015. The Suzuki Gixxer was launched in 2014 and its full faired version, the SF, was launched last year. 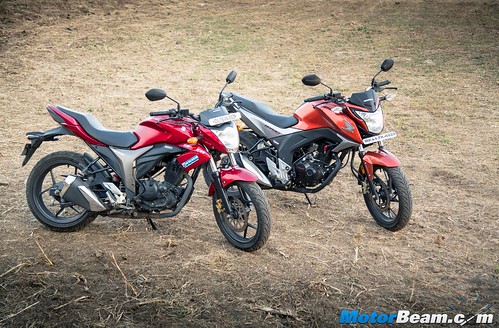 The headlights of both motorcycles have some similarity

Styling – Honda has never made a motorcycle which would appeal to the young at heart, at least not in the mass market segment, other than the Twister of course. Both the old and new Unicorn are going to please middle-aged men while the Dazzler and Trigger did not manage to sell well because of their looks alone. With the Hornet, Honda has broken its mould and given us a motorcycle which looks splendid. The Gixxer is a very good looking bike but the Hornet 160R appeals to us, a feeling which is amplified once both these machines are seen in person. 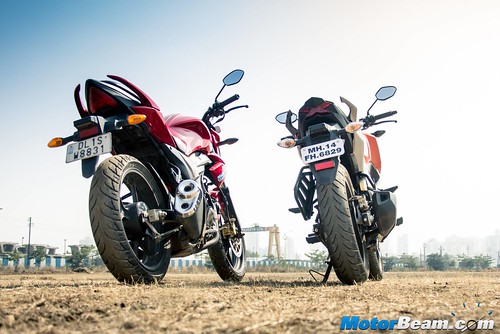 The X shaped tail light stands out on the Hornet 160R

What we like about the Honda CB Hornet 160R is the colour play, alloy wheels, carbon fibre inserts and the X shaped tail light, the CX-01 influence only helping matters. The Gixxer is also a fantastic looking bike and when parked next to the Hornet, the headlights do appear similar from some angles. The twin exhaust is what stands out on the Gixxer while the Hornet’s bigger appearance gives it more presence on the road. The Honda motor also fills the area below the frame better so open spaces aren’t seen like in the case of the Suzuki. 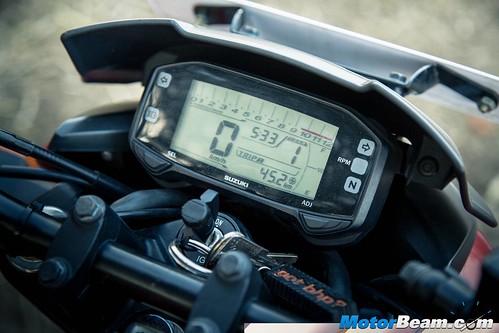 The console on the Suzuki is better with more to offer

Instrument Cluster and Switchgear – Suzuki has made a fantastic console for the Gixxer, not only is it easier to read than the one on the Hornet 160R, it also comes with more features including a vital gear position indicator, clock and Power/Eco mode indicators. Being bigger in size, the cluster of the Gixxer has bolder and more legible fonts although an analogue tachometer would have made things perfect. 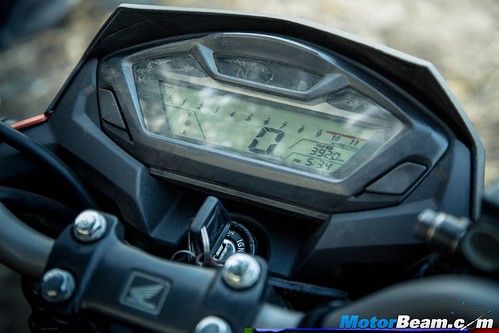 While the cluster is fine, the Hornet misses out on an engine kill switch

From the Trigger to the Unicorn 160 and now the Hornet 160R, Honda has used the same instrument cluster on three bikes. It’s an easy to read all-digital unit with all the vital information one would need. However, it could do with a clock and definitely bigger fonts for ease of reading on the go. In front of the console of the Gixxer, the Hornet could do better. Where Honda could learn a thing or two from Suzuki is the switchgear, the CB Hornet 160R continuing with the dated switches and also lacks the crucial engine kill switch. 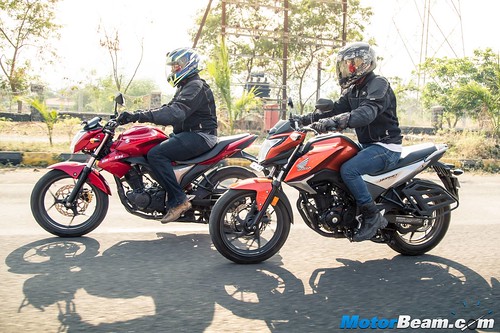 Both bikes offer an upright and comfortable riding position

Ergonomics – Both bikes come with an upright riding position and one pilots a straight handlebar. The seating position is surely comfortable with both bikes getting a single-piece seat. The cushioning on the Honda is better and the Hornet is also more accommodating for a pillion. The seat height is lower on the Gixxer and one sits low which makes it welcoming for short riders while the Hornet 160R has a taller seat height, thereby favouring taller riders. Both bikes have rear-set pegs, the ones on the Honda take a bit of time to get used to. 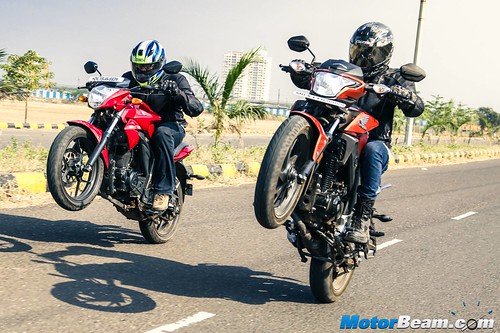 These motorcycles have enough power to keep your daily riding fun

Performance – These 150cc motorcycles are itching to higher displacement as the Suzuki Gixxer packs in a 154.9cc engine which belts out 14.8 PS at 8000 RPM and 14 Nm at 6000 RPM while the Honda CB Hornet 160R has an even bigger 162.71cc mill that generates even more output of 15.88 PS at 8500 RPM and 14.76 Nm at 6500 RPM. Both bikes use a single-cylinder, air-cooled engine but that’s all the similarity between these Japanese powerplants because the Suzuki Gixxer is punchier lower-down, making city ride-ability a boon while the Honda motor loves to be revved and comes into its own in the top-end, also redlining 1300 RPM higher than the Suzuki mill whose rev limit kicks in at 10,000 RPM. 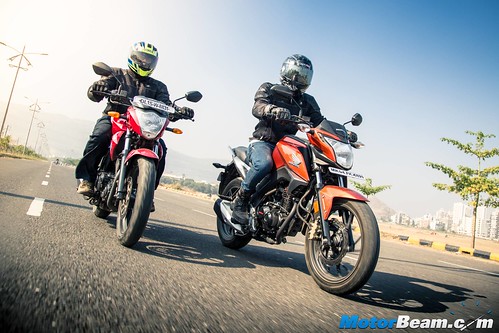 What robs the Honda performance in the city when compared to the Suzuki is the fact that the Hornet 160R produces peak power and torque 500 RPM later, it also has a heavier rear tyre due to the higher profile rubber. The gearing on the Hornet is taller than that of the Suzuki with power being concentrated in the top-end, making it more fun on the highways. The Honda motor feels more refined than the Suzuki and while the Hornet gets HET, the Gixxer gets SEP, both being the respective companies speak for improved performance and efficiency, the Gixxer being marginally more frugal, returning 1 km/l more mileage, both bikes having the same 12-litre fuel tank capacity. 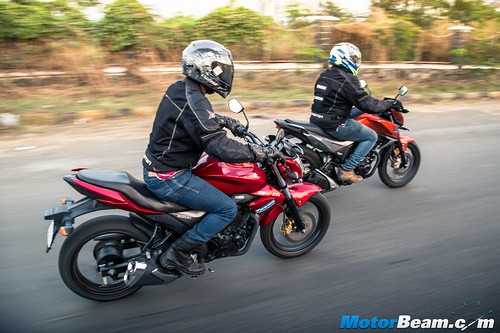 With the higher output, it’s not surprising that the Honda CB Hornet 160R is faster than the Suzuki Gixxer but not drastically. We expected the on-paper numbers to make it faster than the Unicorn but the higher weight of the Hornet, coupled with the increased rolling resistance due to the wider tyres, slow the 160R down. The Gixxer excels when it comes to in-gear acceleration (refer table below) and feels more peppy to ride in day to day conditions. The Hornet 160R does have the higher top speed but that was a given as it boasts of more displacement, power, torque and engine speeds.

Both these Japanese motorcycles come matched to a 5-speed gearbox but the one on the Honda CB Hornet 160R feels a bit smoother to operate, the clutch too is lighter on the wing logo machine. The exhaust on the Hornet sounds nice but is no match for the sportier sound the Gixxer’s twin-port, superbike inspired exhaust makes. The Suzuki is also more inclined to do wheelies due to the better low-end punch. 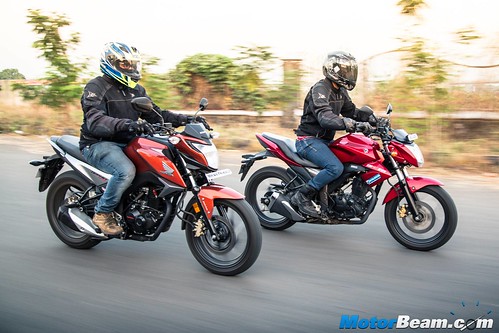 Riding Dynamics – These bikes are sporty commuters and excel in handling. The Suzuki is more manoeuvrable with its lower set handlebars at low speeds and one doesn’t feel very confident on the Hornet immediately. But ride the Honda for a bit and you find it better handling than the Gixxer. The Suzuki is fantastic, in fact both these bikes are so good in handling that choosing one is difficult but what plays a big part in titling things in the Hornet’s favour are its tyres which are softer compounds although not radials, offering better road holding. 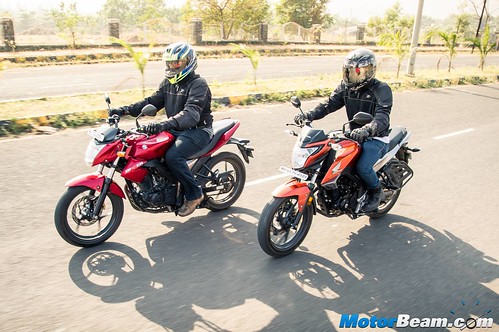 Ride quality on the Suzuki Gixxer is much more compliant

Windblast is a issue on both these naked bikes while both remain very stable at triple digit speeds, not much to differentiate here. Where the Hornet disappoints is the ride quality. One always associates Honda with comfort but the company has gone for a stiffer set-up for both the Unicorn 160 and Hornet 160R. Thus, it’s the Gixxer which is more compliant over bad roads and offers more comfort. But the low ground clearance of the Suzuki means you really can’t up the pace on bad roads as the exhaust tends to scrape. The Gixxer only comes with a front disc brake while the rear is a drum, the Hornet 160R also gets the same set-up for the STD variant while the CBS variant gets a rear-disc and the fantastic combi-braking system. Stopping power is simply better on the Hornet 160R with better brake feel too, it also gets wave discs. 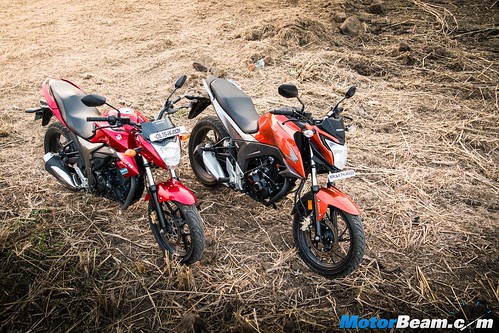 Verdict – Honda has tried a lot to beat its rivals in the sporty 150cc commuter space but to no avail. With the Hornet 160R, the company has gone all-out, even using a name which is just reserved for higher capacity models. Performance wise, there isn’t much to differentiate the Hornet from the Gixxer but what makes this Honda better than the Suzuki is engine refinement, braking and the big bike feel which was lacking on the Dazzler and Trigger. Honda’s better sales and service reach, along with the safety offered by CBS helps the Hornet 160R edge ahead of the Suzuki Gixxer to win this shootout, but only just.

Both these motorcycles are fantastic and choosing one is a tough task but you can’t go wrong with either. While we chose the Honda CB Hornet 160R, the Gixxer too is a totally fun bike to ride and a rear disc on the Suzuki will make this battle even tougher. 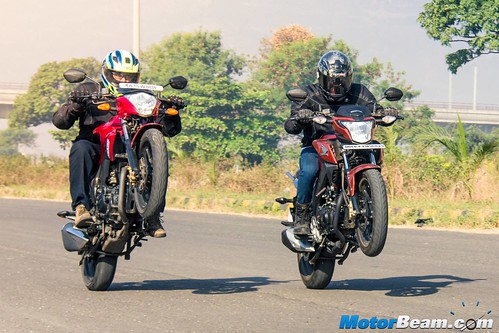 Can’t go wrong with either, buyers have some terrific options these days

“I love the Suzuki Gixxer, it’s one of the best commuter bikes in the market but there are minor issues in this motorcycle which can be overlooked because of the sheer fun it has to offer. For a tall rider, the Hornet 160R is more accommodating but crucially, it’s the brakes which give Honda a lot of brownie points. The CBR maker has always given importance to safety and that along with the top-end power rush make me pick the CB Hornet 160R over the Gixxer.” – Faisal Khan, Editor, MotorBeam.
“The Suzuki Gixxer is very fun to ride whereas the Honda CB Hornet 160R gives a more mature feel. The Gixxer does get some muscular looks but the Hornet is more beefy and has higher appeal due to some extra body panels. The Gixxer stays at home in the city and cute little corners whereas the Hornet is more of a highway player in comparison. The Honda is powerful and heavy while the Suzuki stays light and flickable, both are awesome with their uniqueness and play the competitor game with an edge over each other.” – Dhanil Vira, Road Tester, MotorBeam.
“While the Gixxer is much more sporty, the Hornet is relaxed but offers versatility at the same time. Although, the Honda is not as nimble as the Suzuki due to being 7 kgs heavier. But, with the chunkier MRFs, higher set footpegs and a higher revving engine than the Gixxer, the Hornet does make for a good cornering machine, if not better. As it goes on to beat the Gixxer outright in terms of performance, the Hornet still has the commuter-ish touch which is good in its own way as it can attract a wider range of buyers.” – Adwait Babras, Road Tester, MotorBeam. 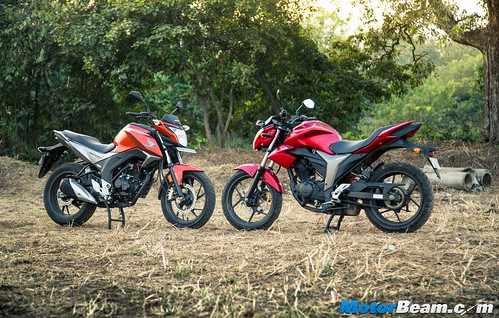 Both manufacturers are set to increase features on these bikes soon