Two compact SUVs – one is functional & practical, the other is funky & appealing

Compact SUVs were an alien concept 5 years back but have become a significant car body style today. While many would credit Ford to start the trend in 2013 with the launch of the EcoSport, it’s actually Tata Motors which should get its dues for it first came up with a sub 4-metre vehicle which wasn’t a sedan, the Indigo CS. Improvising on the same, automakers started developing SUVs which evade big car taxes and voila, you have a growing segment. Although late to the party, the Tata Nexon promises a lot on paper but can it fend off India’s top-selling UV, the Maruti Vitara Brezza?

Motor Quest: Maruti Suzuki showcased the XA Alpha concept at the 2012 Auto Expo and the production model, aka the Vitara Brezza took 4 years to hit the market. Meanwhile, the Tata Nexon was showcased at the 2016 Auto Expo and was launched in September 2017. 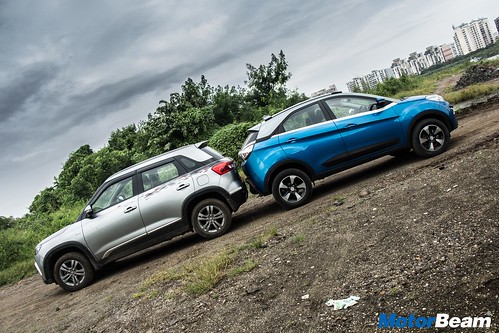 Styling – Both these cars fit under 4-metres in length, yet don’t look too small in size. Both also get dual-tone paint jobs but the one on the Tata Nexon is better executed as you also get a creamish white colour which surrounds the front fog lamps, line below the windows and also at the rear to form an X. Meanwhile, the Vitara Brezza comes across as boxy with a neutral design although Maruti Suzuki does offer iCreate customisation options to break the monotony of the neutral design of its compact SUV. 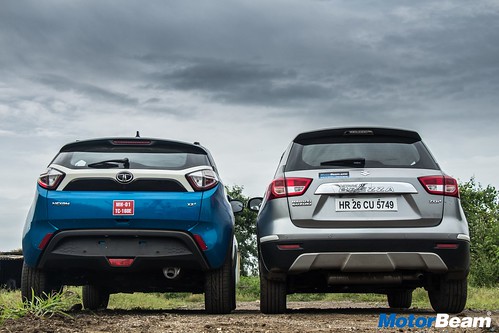 What really works for the Tata Nexon, in spite it reminding you of the Bolt to a certain extent, is the stance of the car. It looks beefy and muscular and even though both cars share the size tyre size, the wheels on the Nexon seem to fill the wheel arches better. The high ground clearance of 209 mm on the Nexon also gives it a more SUV feel than that of the Vitara Brezza at 198 mm. Overall, if you like to blend with the crowd, the Brezza’s design will appeal more to you while for the youth, the Nexon’s standout exteriors sure come across as more pleasing. 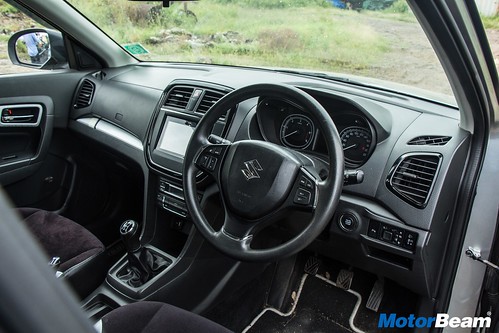 The dashboard of the Vitara Brezza has a functional layout

Interiors – Step inside and both the cars have a very pleasing cabin. While beige has been avoided for good (too common), Tata has use grey to a large extent to make a three-tone dashboard – black, silver and grey. Both cars come with similar quality interiors with some cheap bits here and there but somehow the cabin of the Nexon feels better as the build quality is superior due to heavier doors in the car. The seats too are comfortable in both these pseudo SUVs and while the rear seat is better in the Maruti, the front ones of the Tata are more comfortable. The Brezza’s cabin is wider and thus three at the rear is a possibility, not so in the Nexon where a third passenger is a squeeze. The Vitara has more headroom too but the Nexon has more kneeroom and legroom, it also offers better under-thigh support. Boot space is more in the Nexon too. 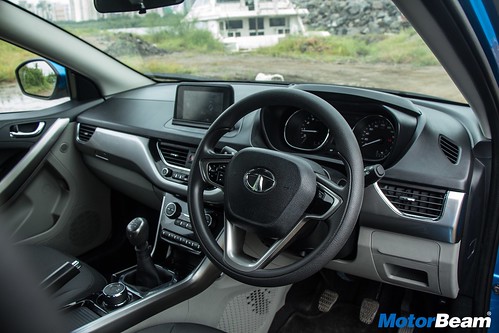 Both cars come with practical cabins with a ton of storage bins, the premium car like storage next to the handbrake in the Nexon looks really nice while the Brezza gets two gloveboxes. The Nexon also gets an umbrella holder which although needs a bit of push and pull to use, is a nifty feature in the rains. Both cars come with keyless go, push button start, steering mounted audio controls, ABS, dual airbags, alloy wheels, climate control AC and a touchscreen infotainment system with Android Auto and Apple CarPlay (will be available later on the Nexon). While the touchscreen system on the Brezza is better, the Nexon’s 8-speaker Harman system offers better audio quality. Unique features in the Brezza include automatic headlights, automatic wipers and cruise control while the Nexon’s unique features are waterproof wristband key and dual blade wipers.