The Tata Tiago is easily among the best cars for a first time buyer in India, it is indeed fantastico

The Zest and Bolt started Tata Motors new innings and when we had the latter for a long term review, we were thoroughly impressed with the car, clocking close to 10,000 kms in 8 months with the vehicle. The Tata Bolt is proof that the Indian automaker is right up there with competition in almost every parameter but the Vista replacement did not sell well and there was only one reason to blame, the design. With the Tiago, Tata Motors has addressed that and the IMPACT design language has found good flavour with buyers. The result is for all to see, the Tiago is Tata’s top selling car and manages to sell more than double that of the second most selling Tata car. 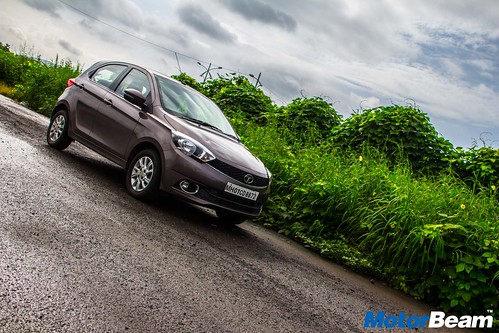 The Tiago is easily the best looking car from Tata Motors

The Tata Tiago entered our long term fleet recently and is a completely new vehicle from grounds-up, it even has all new powertrains so we were quite keen to munch in the miles to see how the oil burner performs over varying conditions. We are pleased with the performance of the 1.2-litre motor which has ample grunt in the city. Tata engineers have got the vibrations (or rather the lack of it) spot on and the vehicle doesn’t feel like a diesel at all, unless you see the inside rearview mirror which does vibrate a bit under heavy acceleration. The motor does get vocal though as you pull into the mid-range.

The diesel engine has plenty of grunt for driving in town

The diesel powered Tata Tiago isn’t powerful on paper, after all it just produces 70 PS and 140 Nm, taking 16.58 seconds to do the ton from standstill (it requires an extra shift to fourth to reach 100 km/hr). But the Tiago was named as Zica for a reason as the former name stood for Zippy Car and this is just a wonderful car to drive in the city. There is no low-end lag and power does drop off sharply post 3500 RPM. We found the Tiago to have adequate performance in the city although when the Eco mode is activated, it feels a bit slow to react when taking off from standstill. 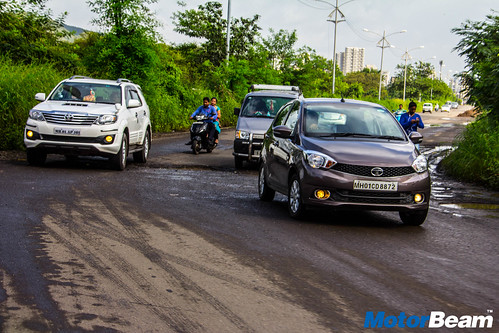 The multi-drive modes on this hatchback do make a difference

Highway performance is adequate but more punch would have been welcome

When driven on the highway, the Tata Tiago doesn’t feel underpowered as long as you aren’t driving spiritedly but when you get into the mood to get somewhere quickly, you have to work the gearbox a lot which once used to, feels slick to use. The clutch too is light. We have been getting a mileage of 20 km/l which is very impressive and a good 3 km/l more than the Bolt diesel. So Tata’s switch to a cylinder less diesel has borne fruit although we do still miss the Fiat powertrain for its punchy mid-range performance. 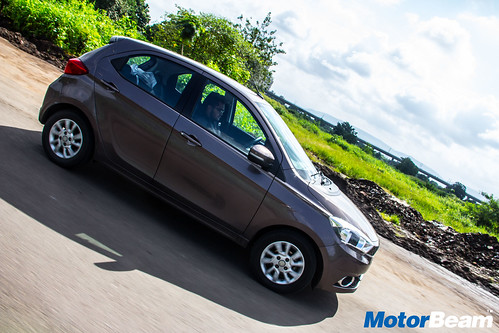 Our second favourite thing about the Tata Tiago is the ride-handling balance. This is a vehicle which feels good to drive while also offering comfort. The suspension has a mature set-up and does a fine job on the pothole ridden Mumbai roads. At times we have jumped speed-breakers and the Tiago did take that well. The handling is fun too and the steering feels well weighed at triple digit speeds. This hatchback remains stable even at 140 km/hr and body roll is very well contained. The good balance means we can drive fast through corners which have bad tarmac. The brakes offer good stopping power and the Goodyear tyres are performing well even in the rains. 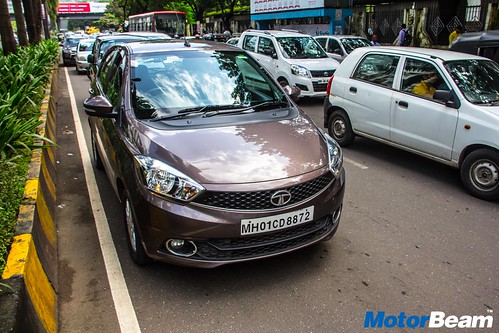 In the city, the Tata Tiago simply excels and is easy to park

Coming to our favourite part about the Tata Tiago, it’s the design. This Tata car is pleasant to look at and doesn’t resemble anything else from the automaker. There are many interesting design elements and that further get highlighted once you step inside the cabin. The dual-tone black and grey cabin is a fresh move away from the over-hyped and much used beige. The dashboard looks sporty with the piano black inserts and chrome touches. Tata Motors has done smart cost cutting, so the spare wheel doesn’t get an alloy but the driver side visor gets a vanity mirror (something even cars costing twice as much don’t get). 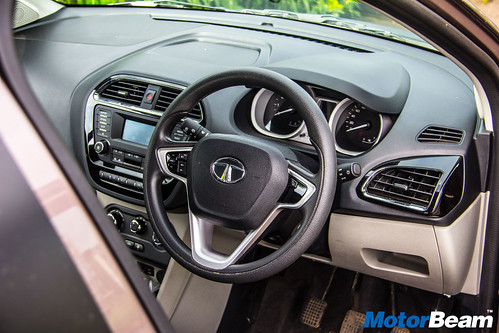 The cabin is nice and very practical too with good aesthetics

Quality levels are truly phenomenal and there is no issue with the build of the Tiago, no uneven panel gaps either, so the Indian hatchback is indeed the best from Tata Motors as far as quality and fit-finish go. There are just too many storage bins inside the cabin and the audio system is nice sounding too. We miss the touch-screen unit found on the Bolt though as this one requires one to connect Bluetooth from the phone and not from the car. We also faced issue streaming Bluetooth audio when a USB device was active. The spacious cabin has good amount of space and there is little to nit-pick about the interiors. A dedicated door lock button would have been a nice addition.

The Tata Tiago is easily the best car for first time car buyers as it is a jack of all trades and master of some. There is little to fault with the car and those who are looking to buy it, won’t complain about the lack of highway performance as much as we do. The company has got the cabin right, it looks appealing, is feature loaded and best of all, feels solidly put-together. What has made the Tiago such a huge success is the pricing and that’s the reason why this hatchback stays true to the #MadeOfGreat hashtag.

The value proposition of the Tata Tiago is hard to beat

Tata Tiago Is New Name For Zica, Launch In March