The Himalayan kickstarted an all new segment of budget adventure motorcycles

Royal Enfield’s foray into the adventure motorcycle world has been rather dramatic. Brainchild of the iconic British manufacturer for this out-of-the-box venture has been the Himalayan which was showcased in 2015. From the BS4 hurdles in the capital last year to numerous quality issues reported by users, the adventure tourer ultimately had its plug pulled out soon after celebrating its first anniversary. Quite an adventurous fate of a motorcycle which was purpose-built for adventure! But, was it the end for what was the Leh-companion in the making? Well, no. Throwing fuel injection into the mix, the Bullet-maker has inducted new life into the dual-sport motorcycle and christened it as the Himalayan FI. Definitely, things have taken a turn, but for the better or for the worse? Let’s find out! 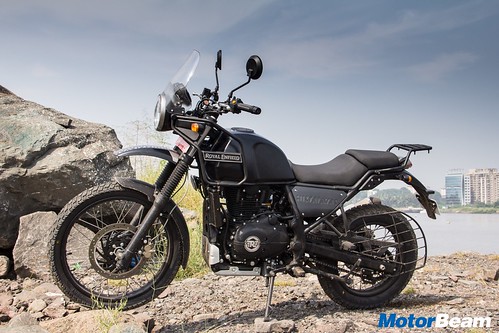 The team for designing the Himalayan was led by Pierre Terblanche

Styling – On the styling front, Royal Enfield has played it safe and not messed around with the apt blueprint of the Himalayan. In fact, even a hawk-eyed observer would take a couple of turns to grasp the ultra-fine changes on the new model. The exposed frame, larger front wheel, immense ground clearance and the sturdy sump guard are all testimony to its rough-road credentials. Visual changes are confined to the black treatment on the handlebars, footpegs, mirror stems and the tank lid. Yes, they didn’t even bother adding an ‘FI’ badge anywhere. And lest I forget, the round headlamp unit which comes sandwiched between the erect windscreen and the vestigial beak is now blessed with the magical AHO functionality! 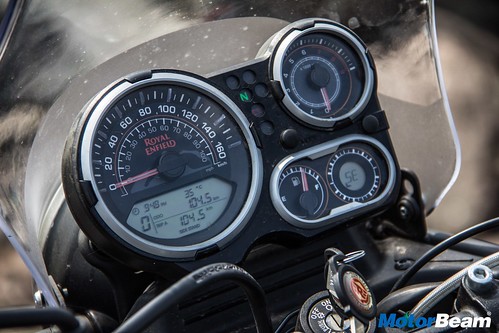 The cluster houses a lot of information and looks well-finished

Instrument Cluster and Switchgear – The part-digital instrument console of the Himalayan FI will send chills down the spine of a person used to the joke of a cluster seen on retro products from Royal Enfield. The entire unit, as well as the decent quality switchgear, is carried forward from the previous version of the Himalayan. Keeping Royal Enfield standards in mind, there are some features as space-age as readouts for time, ambient temperature and even the gear position. The odometer, tachometer and speedometer are standard-fare, while the two trip meters can compute their own average speed data and there is a counter to show the distance travelled on reserve fuel as well. Yes, the compass is supposed to help you out on your off-beat wanderings! 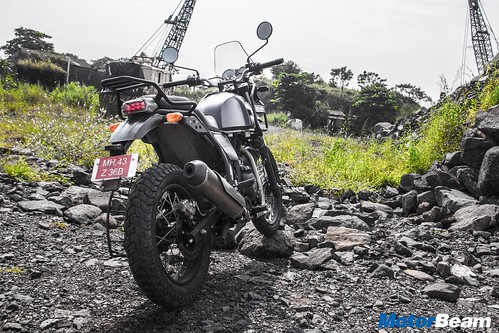 Ergonomics – Being an adventure-tourer, the Himalayan FI continues to offer the enviable blend of perfect ergonomics along with a comfortable saddle height. The seating position is upright and the footpegs are positioned close to the rider. This helps matters off the road when one needs to stand on the pegs to exercise better control over the machine. The tall and wide handlebars are a stretch for shorter arms but feel in-place when attacking off-road obstacles. However, due to the relaxed ergonomics and the high kerb weight, the Himalayan FI fails to instil confidence on tight corners. Comfort levels are excellent for the rider as well as the pillion since the seat is well cushioned and, for the latter, there is a really sturdy rail to grab onto.