People who want a sporty-looking, comfortable MPV know where to look now

Toyota has been fetching mind-boggling sales for the Innova right since the time when it was first launched in India. In 2016, the Innova Crysta made its way to India and even this generation has become a sure shot success story. To make things even more interesting, the Japanese automaker launched a petrol version of the Crysta. Later, to make the product lineup more appealing, the company went on to launch the Innova Touring Sport which is nothing but a cosmetically enhanced version of the Innova Crysta, aimed at those buyers who think that an MPV shouldn’t look boring. 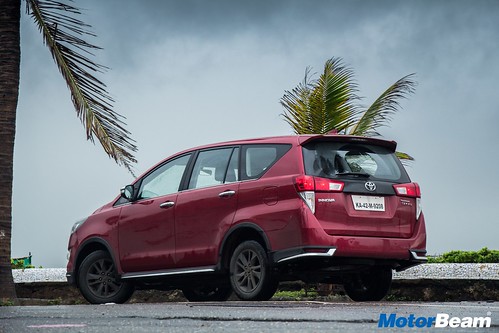 The Innova Touring Sport looks eye-catchy in this red shade

Exteriors – Compared to the regular Innova Crysta, the Innova Touring comes with minor changes to the exteriors but these differences make the car stand out in the sea of the Innovas that are plying on our roads. For starters, the Touring Sport is offered only in Red and White colours and while the White shade looks classy with all the enhancements, the Red one looks loud but not necessarily bad. In fact, I quite liked the looks of it. The tweaks to the cosmetics include matte black alloy wheels, smoked headlamps, bumper skirts and chrome lining on the bumpers and side skirts. There’s nothing major as such and at the rear, you get a Touring Sport badge instead of the Crysta naming. 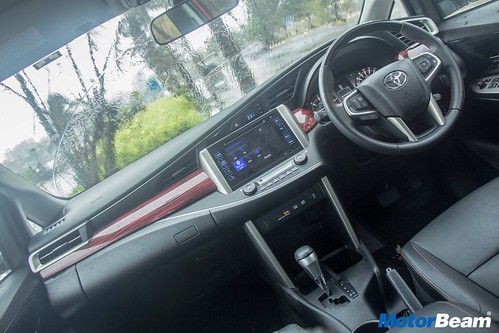 Interiors – The story is similar on the inside, there are hardly any changes. The dashboard layout remains the same but what is different is the red wood trim running across the dash. Apart from that, you get all-black upholstery with red stitching on the seats and steering wheel. The other change is the instrument cluster which now gets a red backlit. The seats in the Innova are large and comfortable even for very long drives. The centre console looks neat and while some materials don’t feel too premium, there’s nothing major to complain about. The infotainment system gets a nice touchscreen and sound quality from the speakers is good. Space in the cabin is excellent and the number of storage spaces and cubby holes isn’t bad either.