Patience isn’t everyone’s cup of tea and definitely not of youngsters who want things to happen in a flash of light. But Apache fans are one of a kind, they are patient and loyal because TVS is slow but sure. After an unending wait for a bigger Apache, the company has finally given us the RTR 200. We at MotorBeam are big Apache fans and since we have a 180 ABS in our long term fleet since 3 years now, we know there is a huge scope of improvement. So when TVS invited us to their Hosur test track in Bangalore to ride the motorcycle, we shunned the Airbus A320 and rode all the way on our Apache 180. This obviously helped us better understand how improved the new TVS Apache 200 4V is.

Motor Quest: The Apache 200 4V does many firsts for TVS as it is the first bike from the company to get an all digital cluster, monoshock suspension, 4-valve engine, oil-cooling, counter-balancer, Pirelli tyres and split seats. It is also the most powerful TVS motorcycle and the company’s new flagship. 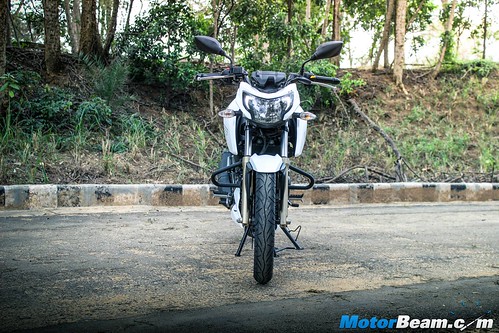 Styling – The TVS Apache 200 takes design inspiration from the Draken Concept which was showcased at the 2014 Auto Expo. The new motorcycle looks attractive with its edgy design and the best part is, TVS hasn’t used many parts from the old model, making the Apache 200 distinctively new. There are still the signature Apache traits (like the stickers and other elements) which make it unmistakably from the same lineage. What really looks good are the unique design of the alloy wheels, muscular tank that gets an offset cap, split seat (first for a TVS bike) and the sexy grab-rails. Upfront, the powerful headlight might appear to be a bit small but has LED daytime running lights which is something only TVS has been doing in India with no other locally manufactured bike getting this aesthetic feature. If we had to nit-pick, then we would ask for LED indicators as the competition too has it. 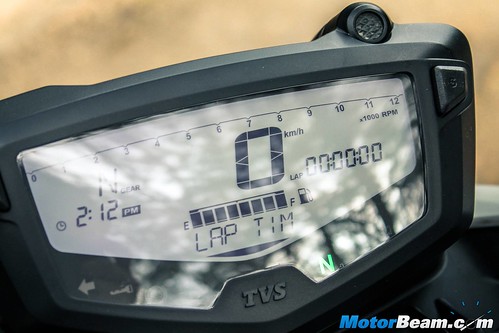 All digital console is loaded with many segment firsts

Instrument Cluster and Switchgear – The TVS Apache 200 gets an all digital console, again a first for a TVS bike and it’s easy to read inspite of being small in size. There are a ton of things on display and the meter has a white backlight. Start the bike and everything on the cluster lights up and the motorcycle gives a hint of its capabilities by displaying ‘Race On’ (inspired from KTM’s ‘Ready To Race’ perhaps?). There is a speedometer in the centre, tachometer on the top, fuel meter below the speedo, mode indicator below the fuel meter, gear position indicator and clock on the left and twin trip meters, lap time recorder and acceleration time recorder on the right. The shift light is placed on the top right. Switch gear is standard affair with good fit and finish of buttons. 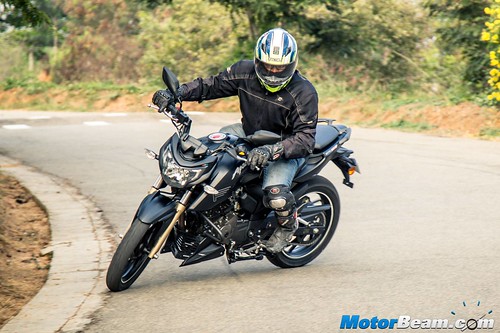 The new Apache is comfortable for both short and tall riders

Ergonomics – One big issue with the TVS Apache was the seat height, it was low making it comfortable for short riders only. The Apache 200 is tall and the seat height has increased too, making the motorcycle accommodating for tall riders as well. The seat is itself comfortable but we will reserve our judgement on that and pillion comfort till we do our road test back home. The motorcycle gets a main stand too, something its rivals lack and we urge buyers to remove it for reduced weight and improved cornering clearance. The Apache 200 has an upright riding position, the stance is a bit more aggressive than the Pulsar AS 200 and the levers get a nice aluminium finish too. There is good under-seat storage too (by motorcycle standards). 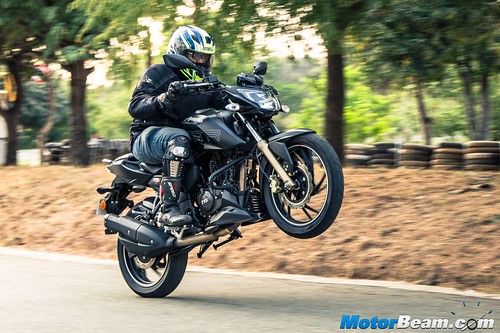 Performance – When specs of the TVS Apache 200 leaked, many, including us, were disappointed as the 199.75cc mill is a bored out version of the Apache 180 and gets 4-valves, pumping only 20.5 PS of power at 8500 RPM and 18.1 Nm of torque at 7000 RPM. The other issue is the lack of liquid-cooling as the company has used an oil-cooler which does seem to perform well (gets RAM air assist) as we noticed no heating issues with the motorbike even during a hot day. TVS did surprise by launching a fuel-injected version as well, with 0.5 PS more power, at 21 PS. On paper specs aside, when you ride the bike on the road, you instantly appreciate the performance as there is terrific low-down punch, TVS stating that the engine has been tuned to deliver 80% of its oomph in the lower part of the rev range for better performance in real world riding conditions. 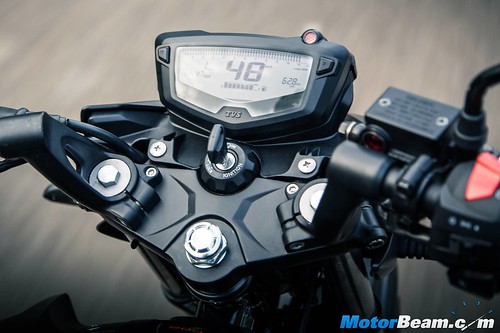 In fact, the performance is so good that the RTR 180 feels much slower in comparison, the Apache 200 reaching 100 km/hr in a claimed 12 seconds which makes it slower than the Pulsar AS 200 on paper but quicker than the Bajaj in initial performance. The top-end is less as riding past 8500 RPM is of little use since there is no power in the top-end. It’s best to shift just under 9000 RPM so the motorcycle keeps its punch while redline comes in at around 11,000 RPM, although it revs higher in neutral, the motor spinning quickly to the rev limit. The shift light blinks at peak torque, that’s 7000 RPM. The carb model does 48 km/hr, 75 km/hr and 100 km/hr in first, second and third gears respectively while the fuel-injected version does 50 km/hr, 76 km/hr and 103 km/hr in the same set of gears. 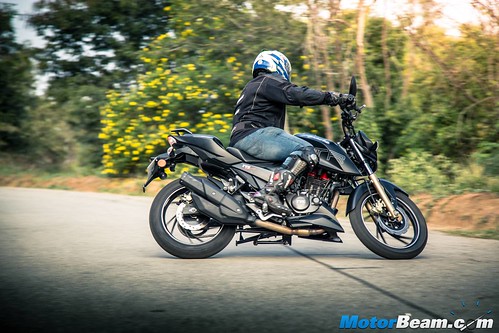 The difference between the carb and FI models isn’t drastic, the former felt smoother while the latter has slightly more punch but a bit more vibes too. That brings us to the crucial question, is the engine smooth with the counter-balancer shaft or has TVS not managed to iron out the biggest weakness of the Apache, vibrations? There is some very good news. The bike doesn’t vibrate, it’s smooth with almost no vibes till 8000 RPM, post which there is some vibrations on the handlebar-end and footpegs. The exhaust gets twin-ports and the motor sounds nice with more bass while the 180 is louder in comparison. The sound isn’t as loud to the rider as it is to the people around. The lack of a 6-speed gearbox couldn’t be judged on the track as we topped out at around 120 km/hr due to the short straight but the first three gears are short and the top two are tall to enable better cruising. The 5-speed gearbox does miss a gear when redlining and the gearshift quality isn’t smooth. 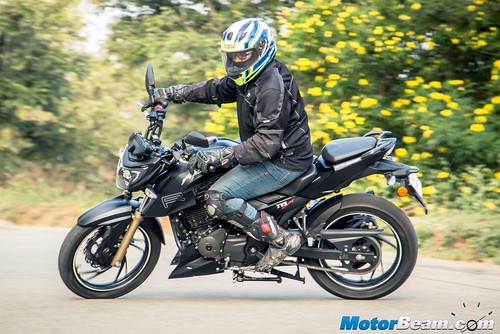 Handling has improved and stability through corners is very impressive

Riding Dynamics – The TVS Apache has always been a good handler with the biggest issue of the motorcycle being the TVS tyres that come with it. Just imagine, TVS which makes both the bike and tyres has accepted criticism and worked on bringing the new Remora tyres which offer good grip. But in spite of that, they are also offering Pirelli rubber which have astonishing grip to offer. The wider tyres inspire more confidence to ride hard but it is really the suspension which has seen a drastic improvement. So we have a monoshock on a TVS bike finally and components are sourced from KYB. While the front telescopic forks are good, the rear is the best part of the bike, making high speed cornering very stable, a place where the RTR 180 had problems. 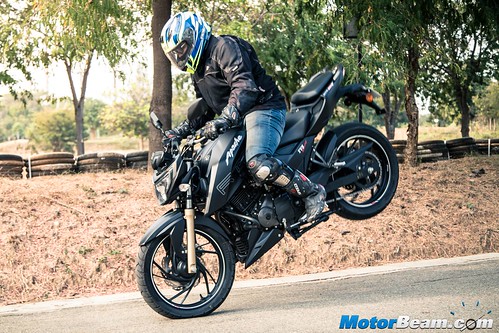 The footpegs of the Apache 200 have been raised (rider’s legs fold more now) when compared to the old Apaches and thus there is more room to corner. The frame is a double-cradle and TVS says it’s stiff but in spite of that, the ride quality is just amazing. The set-up ensures all the bumps are taken in the Apache’s stride without a hiccup. The clip-ons give good feedback but the turning radius is slightly more than the Apache 180 although the RTR 200 is manoeuvrable but could do with 5 kgs lesser weight. We tested non-ABS equipped bikes on the track and stopping power is more than ample, the Apache 200 having sharp brakes which are easily the best in class. On TVS tyres, the rear does lock up under heavy braking. Kudos to TVS for giving the bike dual-channel ABS with RLP (Rear Lift Protection) and not cutting down on safety in the interest of profits by avoiding the half-ABS, aka single-channel, front-wheel only unit. 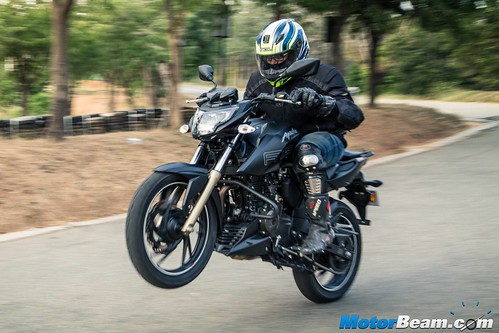 The Apache 200 is an all-rounder, pleasing all kinds of riders

Verdict – Never judge a book by its cover, that’s the lesson TVS has taught us with the new Apache 200. On paper, it might look slow but out on the road, it’s fast and fun. It is not quick as its rivals but motorcycling isn’t all about outright speed, something we at MotorBeam firmly believe. When you ride the new Apache, you not only realise that TVS has put in a lot of effort in it, but you also appreciate how the bike excels in certain areas like refinement, ride quality, braking and real world performance (city and mild highways). With 8 variants on offer with a mix of tyres, ABS and how the fuel is fed, there seems to be an Apache 200 for every kind of buyer in the segment. With track racing left to amateurs, looks like the Apache 200 is here to make every day a race day.

The TVS Apache 200 has been tested thoroughly and engineered very well. It surprises by offering more than what one would expect from it. The flagship TVS bike is a complete package in this segment, offered at an attractive price to help take the Apache brand to newer heights. 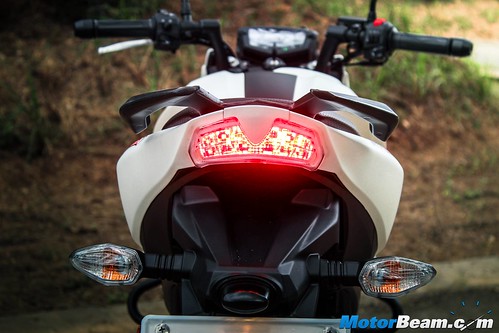 * Engine is very refined and is a smooth operator with little vibes
* Low-down punch makes it very city friendly and quick off the line
* Top build with good quality of components all-around
* Handles beautifully on the track with excellent corner stability
* Stupendously good ride quality, top notch brakes too
* Dual-channel ABS and Pirelli tyres, a rare sight at this price point

* Lack of top-end performance, more power would have made it very fast
* No liquid-cooling in spite of the Pulsar 200 having it since years
* Lacks a 6th gear which would have helped in better cruising and mileage
* Too many variants can confuse buyers and also lead to waiting periods