The TVS Apache 180 is the most affordable ABS bike in India, that too with a dual-channel unit

Back in 2013, it was time for me to get a motorcycle for myself. The budget was restricted to Rs. 1 lakh and the list had to have the best motorcycles within the budget. There wasn’t any option to get a second hand motorcycle and hence the list narrowed down to the TVS Apache RTR 180 ABS and the Bajaj Pulsar 200 NS. I am not a fan of the Pulsar series but it offered something great with the 200 NS. Being a young biker, the Apache RTR 180 which was equipped with ABS caught my attention. And with the introduction of the beast series which had the re-worked headlamp with beast inspired DRLs, bulky yet aerodynamic tank cowl and a small triangular belly cover, the Apache did look much more beefy. Though it misses out on a monoshock and a more powerful engine, a light and nimble motorcycle loaded with ABS and a great corner craver was the pick.

Motor Quest: TVS first introduced the Apache in 2006 with a 150cc engine and called it the Apache 150 Surge. With time, TVS Racing took the Apache as their base and got a series of RTRs in the Indian market. The Apache RTR 160, RTR 180 and the top of the line RTR 180 ABS were introduced in 2011. 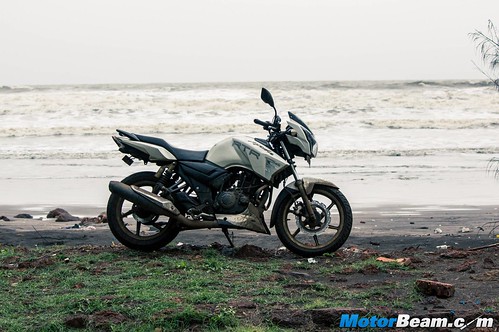 The Apache RTR 180 ABS has been in our stable for about 2.5 years now and has completed more than 33,000 kms and all this while we’ve been just enjoying the bike. The RTR which stands for Racing Throttle Response actually lives up to it. The styling is one element which makes the presence of the bike felt. Though the motorcycle is small and has only a few body panels, those panels do show off pretty nicely. The pearl white colour attracts lots of eyes. This particular colour was exclusive to the Apache 180. The bike came with a few grey coloured graphics which look subtle and the only thing that the ABS version gets is the 3D Apache emblem as it is the top line offering from TVS. 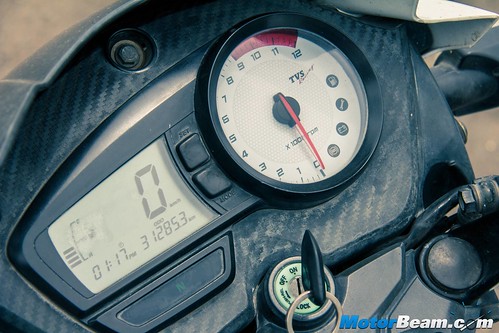 The analog-digital console provides quite some amazing features

There’s something special about the instrument cluster of the Apache which is an analog-digital meter displaying a lot of information. Not as much as the one on the KTMs, but it offers features like a top speed recorder, 0-60 km/hr sprint timer and a lap timer. The tachometer redlining at 9000 RPM is analogue and the rest of the details such as speed, trip meter, odometer, etc. are displayed on the digital console. The cluster gets a blue backlight which is super bright and the digital LCD is easy to read. Even after 2.5 years, the digital meter is clear and displays details clearly. The ABS version gets an ABS indication light. This light either blinks for the first 10 metres if the ABS is working fine and goes off or stays on post that continuously indicating there is some ABS related issue. 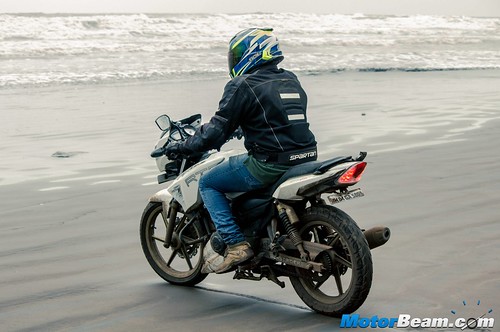 The ergonomics of the TVS Apache are pretty different, some find it weird while others find it comfortable. The handlebars are clip-ons and give a superb riding feel while the footpegs are raised and centre set. This seating gives a good grip on the tank and it’s much more comfortable for the upper body as the clip-ons aren’t aggressive! The tank is big and takes up 16-litres of fuel but the tank feels wide as the seat is a bit thin and it doesn’t provide any great thigh support either. However, the seat is soft and comfortable. The pillion is comfortable on the seat too but tall riders don’t feel too comfortable due to the dimensions of the bike. Overall, the bike is compact and comfortable for an average height-ed Indian guy. 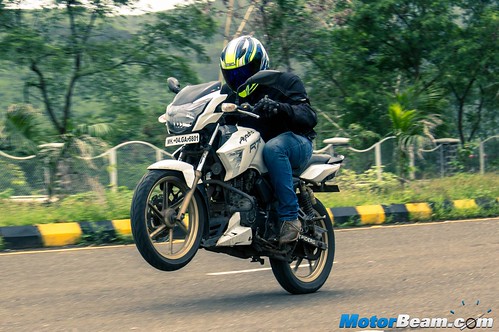 Light weight, immediate throttle response and a unique riding posture are the best things about the Apache

On paper performance of the TVS Apache 180 ABS is superb with the kerb weight being 139 kgs and the engine belting out 17 BHP of power at 8500 RPM and 15.5 Nm of torque at 6500 RPM. The main fun is near the peak torque range as an immediate throttle response and a crisp action is felt at 6000 RPM and it gets better as we move up the RPM range. But to get a good slice of mileage and power, sticking down to 80 km/hr and just at 6500 RPM is a better option. The bike got its fair share of modifications too over time. Just when the Apache completed 6000 kms, a trend of having a performance exhaust was going on and I got one of the best exhausts from Race Concepts which was specifically made to boost performance. I was amazed with the sound and a noticeable difference in performance. The 180 accelerated much faster and could hit the ton quicker as the stock exhaust weighed around 8 kgs while the performance exhaust weighed only 2.5 kgs. As the bike has a 0-60 km/hr sprint recorder, I could achieve a time of 4.8 seconds with the stock exhaust and 4.4 seconds with the free flow exhaust. The downside to this was the loss of top-end performance which decreased the top speed by a small bit. 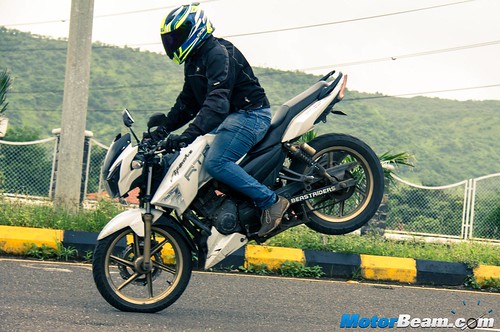 Want to pull something like this? Turn off the ABS first!

As I completed 10,000 kms, the TVS Apache 180 ran on the performance exhaust and it accelerated very well. One fine Sunday noon, a small stroll nearby led to a minor accident. The not-so-grippy stock TVS tyres and over-acceleration led to a wheelspin and the bike skid off on a slightly muddy road. Bam! The bike was down and so was I. No riding gear except a helmet led to a few bruises here and there. This made me change the stock tyres to a pair of Ceat tyres. The next fortnight was my first ride to Lavasa and the bike got me hooked to the corners like nothing else. Winter time and grippy roads with new set of tyres. I started scrapping the footpegs over and over again. After the completion of the first year and about 15,000 kms, the Apache got golden coloured alloys to match the shock absorbers. And right after this was the addition of CDI and removal of the performance exhaust. The CDI was a race spec one which made the redline go above 12,000 RPM and it worked. Earlier, the bike used to cry at 9000 RPM but with the new CDI, it went upto 12,000 RPM. But, this lasted only for 2000 kms as the bike started heating even at idle and the engine oil started burning quickly. 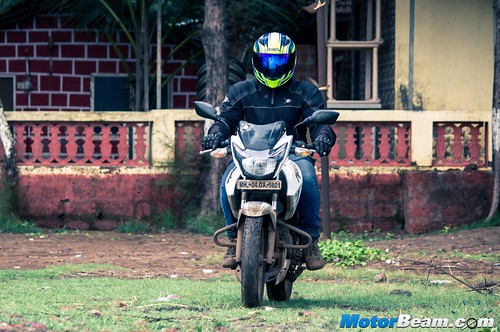 The TVS Apache does look beefy and aggressive from the front

From 18,000 kms to 28,000 kms, the Apache got free engine oil as TVS was getting its synthetic oil ready and needed potential customers with different riding styles to test the same. While the bike was running all stock, a new trend of having a tail-tidy was on and with a DIY experiment, I took the rear mudguard off and held the number plate with a small metal bracket. It was time for another set of tyres as the off-road Ceats lost their grip too soon. Next came in a pair of Michelins which gripped very well but didn’t like wet or damp roads. This was the time when I noticed that the stock sound of the Apache is the best of all the bikes available in the market and the money invested on the performance exhaust was actually wasted. Special thanks to the KTM Duke which made me realize the Apache’s exhaust sound was actually bassy and good. 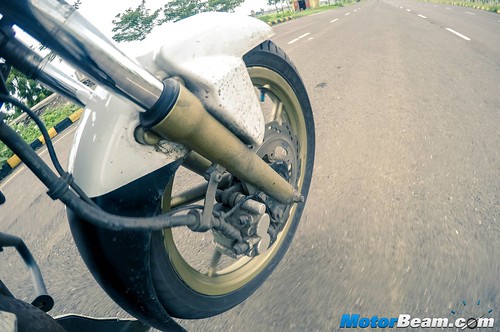 The only thing about the TVS Apache that bugs the rider is the vibrations as the small sized engine produces good power but isn’t the best in terms of refinement. A glance at the engine and it does look small in size considering all the other dimensions of the bike. The gears are short and hence whenever one would go redlining, the top gear comes in very quick. First gear redlines at 42 km/hr and the corresponding gears redline at 70 km/hr, 90 km/hr, 110 km/hr and 130 km/hr. The bike is certainly fast and to stop a fast bike, good brakes are needed and TVS was the first Indian manufacturer to introduce petal discs and ABS in the Apache. ABS is the safest braking solution and the one in the Apache has helped me a lot in the rains traveling through Malshej ghats and covering the coastal routes without any fear. Stand on the brakes and the bike stops. A jittery feeling from the levers and the pegs indicates that the ABS is kicking in and the bike slows down with the least possible skidding. 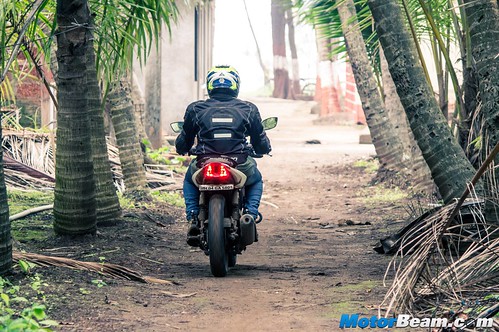 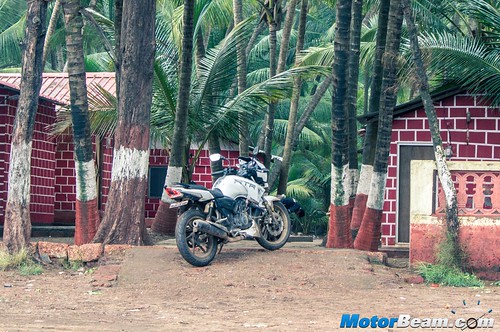 The last upgrade on the TVS Apache 180 was the set of tyres by MRF which actually suit the bike well. Many would have seen a few images or videos in which the TVS Apache console displays a top speed record of 160 km/hr. Such an issue has been common in Apaches due to a sensor error but I didn’t face the same. Special thanks to the ABS and dual sensors in the front as well as rear for saving my life quite a few times. The strong braking led to me being rear-ended once by another bike giving a minor hairline fracture in my right leg. No bike under Rs. 1 lakh can beat the braking performance of the flagship TVS. An amazing 2.5 years and 33,000 kms, it is time to look for an upgrade without breaking the bank. Perhaps the upcoming Apache 200 or the TVS-BMW G310R would fit in rather well.

The TVS Apache RTR 180 ABS has been in the market for more than its time and has pretty much lived upto it as TVS has sold more than 1 lakh Apaches. With competition being too intense now, TVS needs to quickly bring in something even better to grab a chunk of this growing segment. 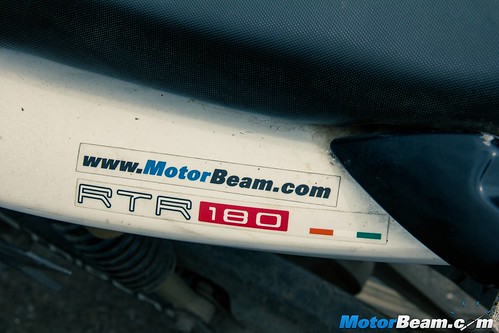 MotorBeam is the home for this TVS Apache RTR 180 ABS

* Vibrations from the engine are a bit too much
* No rear monoshock, sometimes the bike gets unsettled in corners
* Poor resale value, difficult to find a buyer

TVS To Roll Out Apache In US