It’s all about dirt, muck and off-road here; everything grips in a different manner

The first time I visited TVS’ Anekal Track was 2 years back when TVS Racing announced their plans for Dakar with Sherco. This time around as a part of the one-make racing, TVS got us some off-road training so that we understand the difference between road and off-road racing. Also, as a part of skill development, international racers tend to take up flat-track or supercross as training while they are into road-racing. At the track, Aravind KP welcomed us with some crazy jumps and literally everyone was thrilled to get the day started. 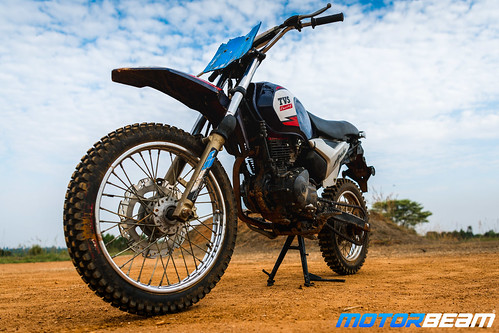 The Apache RTR 200 4V in a complete dirt-spec

To start off, we knew Aravind KP would train us but TVS had also got Abdul Wahid Tanveer who is a TVS Factory Racer for off-road. After the jumps and photo-op session, we started the day with an introduction and Aravind told us what the schedule is going to be for the whole day. But as we geared up and got ready, the first thing we actually did was exercise and stretch as our lazy body parts needed some wake-up call. Next up was the body positioning, where Aravind told us what to do while Abdul showed us how to do. And then we were put into groups of four each while I was in the second batch. 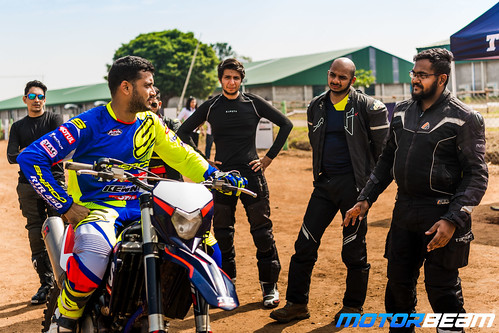 First up, an open classroom session with Aravind KP

Aravind was riding the RTR 300 FX while Abdul was on the RTR 450 FX and we were given the Apache RTR 200 4V in a complete dirt-spec. These are the motorcycles which are used to take part in the National Championships under the Group B category. None of our 200’s had a headlight neither were there any body panels. There were cardboard sheets on some sides and the only metal/plastic part present was the tank and the front mudguard. Once we got acquainted with the bike, we started off with the figure-8 on the flat section. At one cone we had Abdul while at the other one was Aravind with a stick in his hand!