Being an automobile enthusiast, there’s always a good feeling towards any cars or bikes we encounter. Moreover, being a crazy bike enthusiast, there’s always a chance that we’ll have fun with any kind of motorcycle. Talking about this, we have had the TVS Star City+ for quite some time as one of our long term motorcycles. A 110cc motorcycle for long term, how much would one ride it! Well it’s become the solo ride for the city commute from the time it is with us. By these few words, it’s easy to know that we’ve had a good taste of this bike and we’ve got quite something for the initial report. 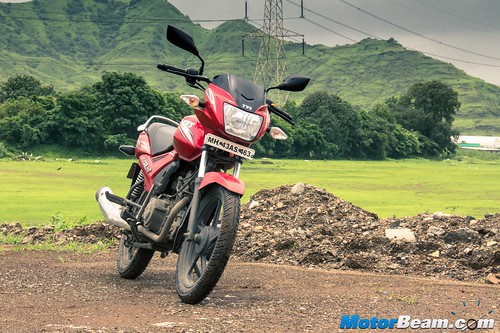 No aggression at all, the TVS Star City+ has the perfect simple commuter look

The time I received the TVS Star City+, I took it with a straight face thinking why would I ride a small 110cc bike as a long termer. But after about a month and a half, there’s this smile on my face as this bike has become my pocket bike for daily commute. Let me start with its styling. The TVS Star City+ is not at all an eye-catchy bike but the red colour is bright and spotting it in crowded parking is easy. There’s no special bit but the bike has decent graphics, enough to suit the colour. The exhaust gets an all chrome type heat cover with the EcoThrust label on it. 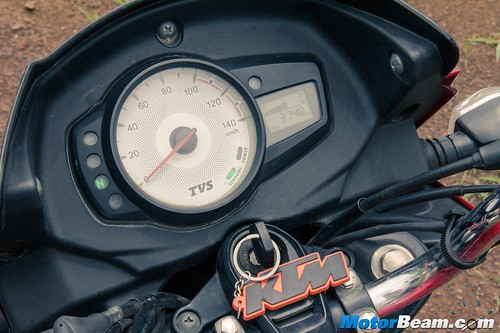 The bike gets a starter switch and proper switchgear but there’s no engine kill switch. Instrument cluster is semi-digital, which includes the analog speedometer with the various LEDs indication and the rest of the details like the odometer and the fuel gauge are put into a small digital LCD. Every time the key is turned on, there’s the total scan that happens, seen on most of the bikes nowadays. The cluster has a white background which looks good while it misses out on a tachometer and an extra trip meter. But there’s these two LEDs which display the power/economy mode. Based on the throttle input, these lights glow. At gradual throttle, the economy mode with green LED stays on, while on over throttle or going past a particular RPM, the red LED with power mode lights up. 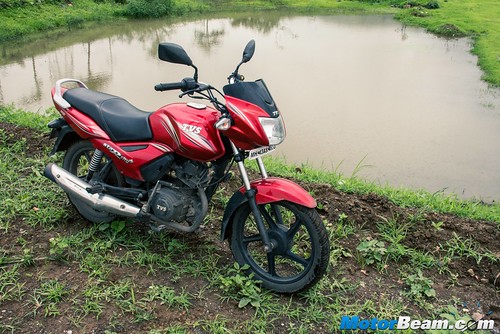 One of the most comfortable seats on a commuter motorcycle

The engine happens to be a 110cc powerplant holding within a molycoat piston basically to reduce friction and give better combustion result. With 8.4 PS of power at 7000 RPM and a torque figure of 8.7 Nm shooting in at an early 5000 RPM, the bike is very much fun to ride. Once in the rev range, the small pocket motorcycle becomes a rocket in the city. It shoots good amount of torque to maintain 80 km/hr very easily. At close to the on speeds, the throttle response is amazing. The bike has very quick gear shifts and being a 110cc machine, there are four gears. Even with four gears, the Star City+ cruises well between 60 to 80 km/hr. The NVH levels are very well matched with the bike’s performance. There’s this EcoThrust engine which has a good bassy sound coming from the exhaust, appealing to the bike. 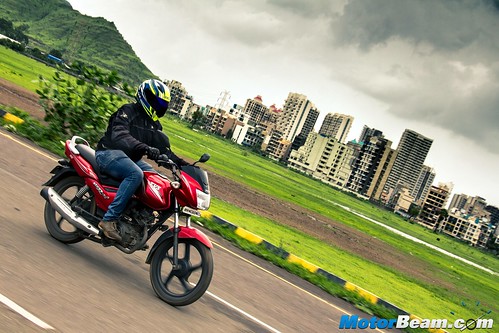 The Star City+ is a gem with its ride quality. Even though it doesn’t have the best hardware, it actually has the best ride quality. With telescopic front suspension, a very well cushioned seat and adjustable rear shock absorbers, the motorcycle glides over any kind of road. It takes bumps so well that even with two on-board, the pillion doesn’t get any harsh feedback of the bump hit. The bike bounces in a gradual manner. The tyres and the brakes are puny but they do the job very well. The best part about the tyres is that the rubber is so good it doesn’t lose grip instantly and with the rear tread pattern, there is decent amount of off-road grip too. 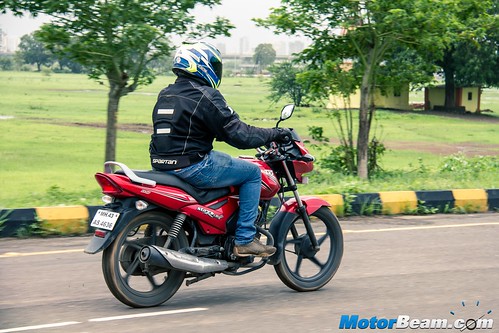 Talking about the puny brakes, the 130 mm drum at the front and the 110 mm drum at the rear are just about sufficient to make the bike stop. In a way they are great too as they provide just the right amount of braking and the Star City+ has never had a skid or wheel lock under hard braking. A down-shift helps much in stopping the bike earlier. Even while taking sharp turns, the bike supports well. The riding posture being a total commuter, there is relaxation every time. 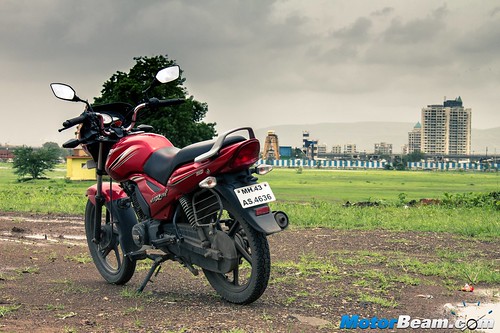 TVS’ Star City+ is a very good bike at the price it comes for. At just Rs. 52,500/- (on-road, Mumbai), naturally there aren’t much features but the bike is excellent! It is a daily commuter and it’s worth every penny. The company claims a mileage of 86 km/l in ideal riding conditions but the bike being so good at its core, that is riding, ideal conditions just doesn’t happen and so around 55 km/l is worthy enough of what the bike delivers. The Star City+ even after being small, is very strong. The time before we received it, the bike already had a small crash but the damage to the motorcycle was very minor which was noticeable only while riding. With some more time left to ride, letting it go after the final report might make us miss the bike (you read that right, we will miss this 110cc commuter), but till then we got to keep enjoying this under-rated machine. 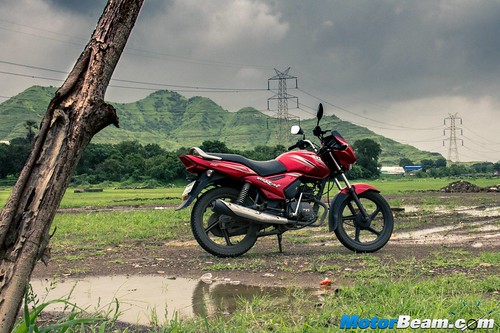 It’s a star in its segment, best for city and good things just keeping adding up