The T-Roc will attract a small group of buyers with its premium price, smart design and long list of features

Realising the importance of SUVs in India, Volkswagen has decided to go flat-out with an SUV offensive in the Indian market. Their first 'made in India' SUV is the Taigun which is still a year away from launch due to localisation but the German automaker is bringing in the T-Roc via the CBU route (no homologation needed for under 2500 units) to give Indians a flavour of what to expect from SUVW. We drove the Volkswagen T-Roc extensively in Germany to get a good understanding of this Creta-sized but Compass-priced (the T-Roc is a CBU) SUV which has impressed in abundance.

Motor Quest: Unveiled in 2017, the T-Roc is Volkswagen's fourth SUV and was showcased at the 2020 Auto Expo with the launch happening in March. It previews what to expect from the locally made Taigun which will be launched next year. 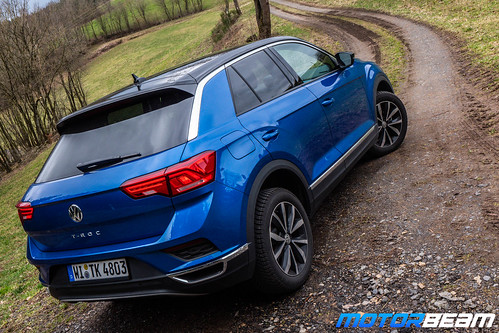 The T-Roc's simple design has all typical VW elements

Exteriors - Volkswagen's design is very neutral, some might call it bland while many would lament the styling to be classic and timeless. However, with the T-Roc, there is a shift in the design direction because this compact crossover does look quite striking thanks to the quirky elements previously unseen on a VW car. The front gets chrome surrounds around the grille, the black cladding runs around the car for an SUV feel while the roof, mirrors, grille as well as the A and B-pillars (with Volkswagen written subtly) are finished in gloss black. Our test car being the lower-trim missed out on full LED lights but these are standard on the Indian model. 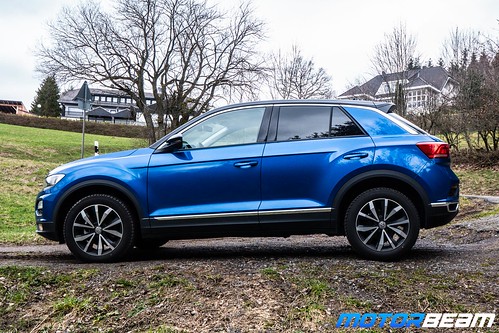 The side profile of the T-Roc makes it look like a mini Tiguan with roof rails that seem more form than function and the same philosophy has been carried at the rear too where there are two fake exhaust outlets (one on either side) with the real exhaust tucked right under with twin ports. Chrome has been used at most places including the window-line as well as the rear bumper for the premium appeal. The 17-inch wheels on our test car look good but we are unsure if VW will offer the same wheels on the India model as the car showcased earlier seemed to be running on bigger wheels which may not make it to the production model. So while the size isn't the T-Roc's forte, it surely has some interesting design elements to make it stand out with the India model to get a higher ground clearance. 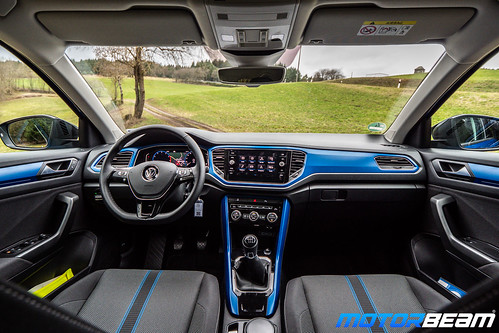 Interiors - Step inside and it's typical VW affair with a dose of style because the exterior body colour is now splashed on the dashboard for a youthful appeal. The cabin feels nice and well put-together, after all, it's a Volkswagen so build quality is a given. However, the plastics inside the cabin are just too hard and I would go and say that the quality of plastics simply feels cheap and out of place on a car that costs upwards of Rs. 25 lakhs, VW seems to have taken cost-cutting just too seriously here. The seats are comfortable, ergonomics are spot on (other than the fact that to move the seat angle, you have to rotate a knob which is very cumbersome, there should have been a lever instead). Our test car had fabric seats but VW will give leather in India. 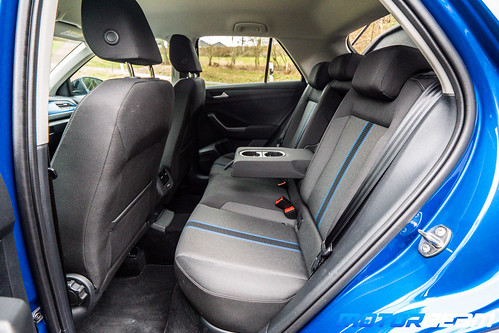 Being a Volkswagen, build quality is excellent but the quality of materials used is not on par with its competition

However, in spite of our test car being the lower trim, it was loaded with a ton of features including an excellent 12.3-inch digital instrument cluster which is very similar to Audi's Virtual Cockpit, dual-zone climate control (we didn't get a chance to test the AC due to the cold), a slick 8-inch touch-screen infotainment system with Apple CarPlay, Android Auto, MirrorLink and excellent Navigation but it is a fingerprint magnet, tyre pressure monitoring system and 6 airbags. While our test car missed out on some features like push-button start, front parking sensors, reverse parking camera and a panoramic sunroof, these make it to the India model. There is a decent amount of space at the rear with good headroom and a centre armrest with cupholders, the seats are comfortable and there are rear AC vents too, the boot is big (the rear seats recline in 60:40 split) and the rear window opens completely too. 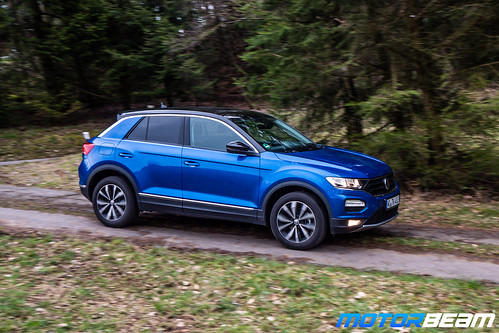 The TSI motor is quite refined and frugal; offers good driveability

Performance - Volkswagen has dropped diesels and I was sceptical about the 1.5 TSI Evo motor filling in the shoes of the torquey and efficient oil burner. However, this engine has surprised and how! Using turbocharging and direct injection, the 1.5 TSI gasoline mill comes from the same family as the 1.0 TSI, 1.2 TSI and 1.4 TSI but is the latest, offering the best of both worlds - performance when you need it and economy when you go easy on the gas. Producing 150 PS of power and 250 Nm of torque, the engine is supremely refined with lag well contained and a strong mid-range, it does get vocal when you push it past the mid-range but in a good way as it has a sporty note. 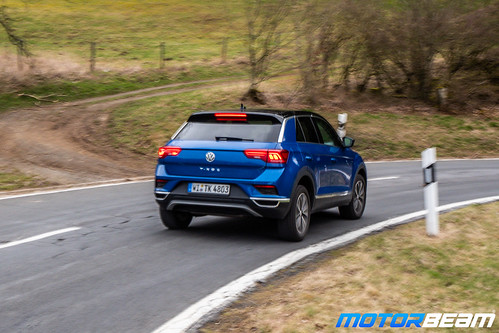 India spec T-Roc will only get a 7-speed DSG

Redline comes up at around 6500 RPM but the motor doesn't feel stressed at any given moment. 0-100 km/hr takes just 8.4 seconds while the top speed is rated at 210 km/hr although we did manage to touch 216 km/hr with ease on the derestricted German Autobahn, so the engine does punch much more than the displacement would suggest, that's how impressive the TSI powertrain is! But it's not just performance where it shines, our high-speed driving resulted in the car returning 12.5 km/l (with no AC) but in India, it should give anywhere between 12 (city) - 18 (highway) km/l. Part of this stunning mileage can also be attributed to Active Cylinder Technology (ACT) which shuts two cylinders when you are driving sedately, thereby activating Eco mode. Our test car was paired to a 6-speed manual box with a light clutch and slightly notchy shifts but the T-Roc in India gets a 7-speed DSG automatic gearbox only. 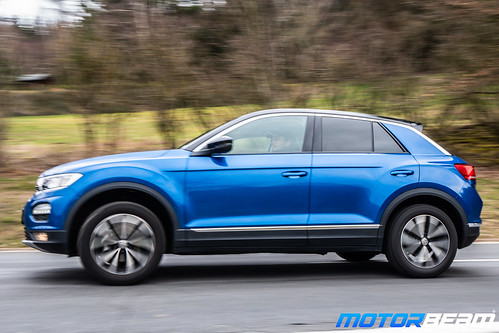 Driving Dynamics - The Volkswagen T-Roc is underpinned by the MQB platform and feels quite light and agile. The steering is direct and responsive but not the most feel-some at higher speeds although it does inspire confidence to drive at high speeds where the car remains glued to the road, even though our test car was running on winter tyres. However, wind noise is a lot and so is tyre noise past 150 km/hr. The car gets active lane keep assist which makes steering movement to keep the car in lane, it also gets automatic emergency braking. The suspension is on the stiffer side which was good for high-speed highway driving but the stiffness could be felt on bad roads. Volkswagen has tweaked the suspension for the Indian model to comply with our bad roads. Braking performance is excellent with a sure-footed bite on the pedal. 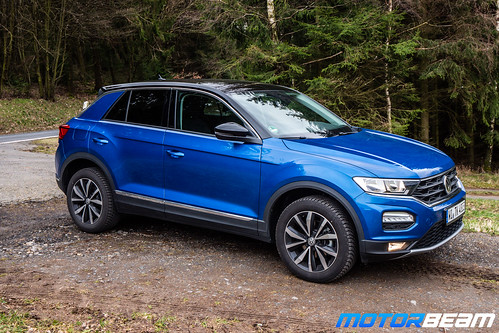 The T-Roc comes across as a well rounded premium SUV

Verdict - The Volkswagen T-Roc is hugely impressive, there are no two ways about it. It looks good, drives well, the 1.5 TSI is a stellar powerplant and the dynamic balance is excellent too. Certain things fall out of sync though like the hard plastics and the high price with the premium not being justified in spite of how good the car is. VW should have launched the all-wheel-drive (a.k.a. 4Motion in VW speak) version in India which could have justified the price to a certain extent but since this is just a precursor of things to come from the German automaker, the T-Roc makes just the right impression. 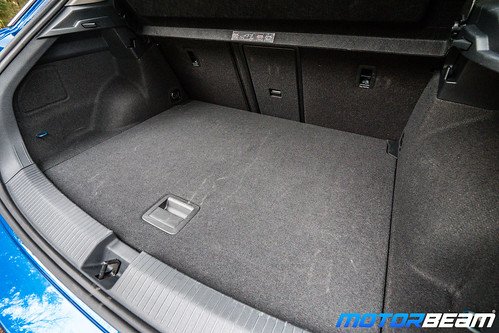 The rear seats can split 60:40 to increase the boot carrying capacity 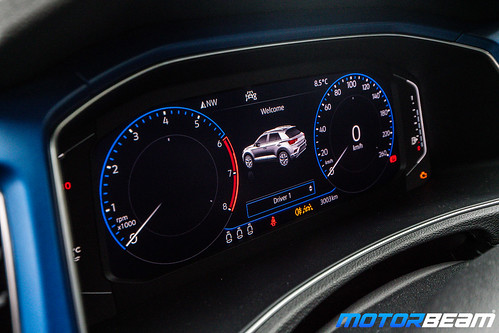 Large all-digital instrument cluster is leagues ahead of its competition 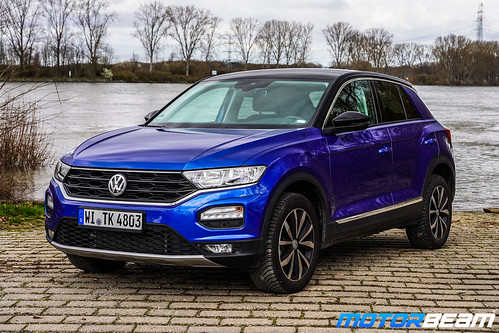 The Volkswagen T-Roc has been launched in India to be slotted below the Tiguan. The impresses a lot and comes across as a fantastic package. It is great to drive, has a good amount of technology and boasts of good build quality. While it is priced at a premium, the T-Roc is still bound to find a decent number of takers.

February 2020 has been a bad month for sedans. We all are aware of the fact that the automobile industry has been suffering since more than a   END_OF_DOCUMENT_TOKEN_TO_BE_REPLACED

KTM releases latest TVC showcasing versatility of the 390 Adventure. Catch All The Latest Videos, Subscribe To MotorBeam So the much awaited   END_OF_DOCUMENT_TOKEN_TO_BE_REPLACED