These scooters are placed in the entry level segment, offering everything you would need.

Asia is a very large continent and it has very large countries. In these large countries, there are large cities, which mean if you keep encountering the word ‘large’ you end up with the synonym ‘crowded’, specially when you consider ‘human beings’ in it. This is when you realise cities are filled with people who are small and need small things to tackle large city streets. This invites manufactures who make automobiles to make required vehicles which meets the public demand. One such country is called Japan, where people share the same demands as we do as (we are Asians after all). We need small, nippy vehicles (four or two wheels) to get from point A to point B easily. 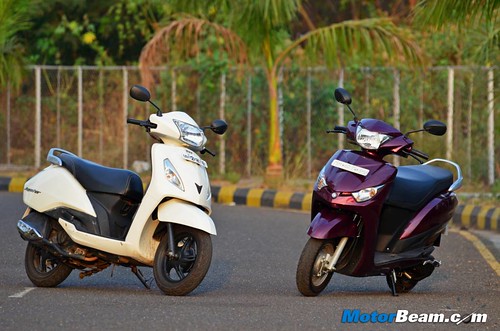 This is how scooters were born and we Indians tasted two wheels first in the form of a geared scooter if you have a sharp memory. Combine all this and you have a winner. Japanese reliability with demands that match our needs, is and has been a win-win proposition. However, domestic manufactures here have also understood the need and the folks from the south have earned a good reputation in the scooter market. We are talking about TVS and their latest scooter, the Jupiter. The name is of the largest planet, but it is the compact scooter you are looking for, or is it? Yamaha (the Japanese) have thrown in the male counterpart, the Alpha (how obvious). We find out for you by deciding which 110cc scooter is the best in every aspect. 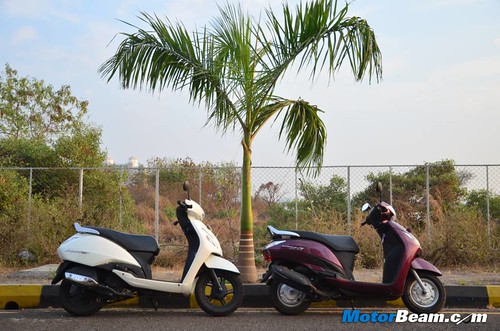 Styling – The Yamaha Alpha is the latest scooter to hit the market but it’s not the most attractive. The handlebar mounted headlight and swooping panels look appealing. The headlight looks different compared to the Jupiter and Activa, so there is something different in this scooter. However, the headlight ends up resembling the Suzuki Swish, which doesn’t gel well with the overall design. The front mudguard on both the Alpha and Jupiter look alike and are inspired from the new generation Activa. 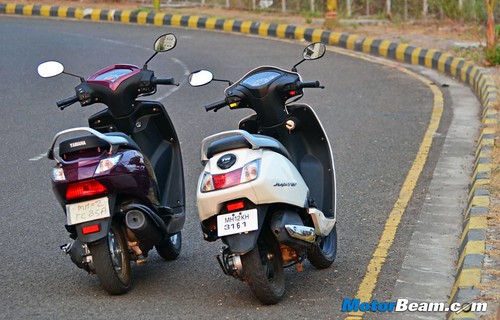 The turn indicators on the Yamaha Alpha have a teardrop design but the end design does not look propionate. On the other hand, the side indicators on the TVS Jupiter, which are borrowed over from the Wego, look good and gel well with the overall ‘oval’ design of the side panels and the complete scooter. The side profile of the Alpha was designed to give it the ‘long’ look but ended up looking basic, not characterful like Yamaha designs. Overall, the Jupiter looks far more superior from every single angle. Round one goes to the Jupiter.

Instrument Cluster and Switch Gear – Yet again, the Jupiter wins by miles with an array of features on display. ECO and POWER modes are segment first features. The dedicated turn indicators on each side, fuel reserve light and high beam indicator on the top are placed on the instrument cluster. Switchgear is borrowed from the Wego and is funky due to the use of red colour for the ignition switch and yellow for the horn. High beam button acts as a pass light switch which is a neat feat pulled by TVS. Come to the Yamaha Alpha and you find nothing like this except the entire front panel which is included in the surrounding of the instrument cluster (runs so high) which is body coloured and adds some flair to the basic console. Basic switchgear and instrument cluster with needles being borrowed from the Ray does not make the Alpha feel feature rich. The odometer, fuel gauge, solitary indicator light remain the only things to be displayed in the Alpha. Round two goes to the Jupiter. 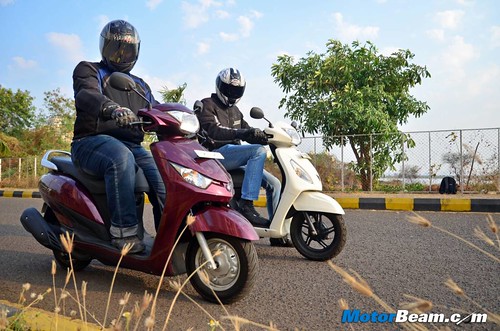 Practicality – Both scooters have wide and long comfortable seats. However, the Jupiter’s seat is more soft which is not so great for long rides. The seat on the Alpha has the right balance of cushioning and is equally suitable for short and small rides. You sit upright on both these scooters but the Alpha has a slightly more commanding position compared to the Jupiter, hence the visibility is good at the front on the Alpha. Rear view mirrors and rear visibility is excellent too on both these scooters. Floorboard on both these products are class leading in terms of width and both get equal marks for this. The Alpha feels more roomier than the compact Jupiter which makes you feel cocooned. The Alpha and Jupiter both offer excellent spread from their headlight but the illumination of the Jupiter is a notch superior than the Alpha. 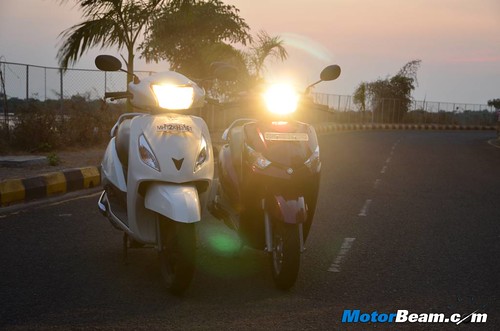 Both scooters have great spread and illumination, Jupiter’s is a notch above

Performance and Gearbox – The Yamaha Alpha has a 113cc powerplant while the TVS Jupiter draws power from a 110cc mill. The Jupiter produces more power than the Alpha. Engines on both scooters are terrifically refined and smooth in nature due to the majority use of aluminium. The Alpha has the traditional creaminess of a Japanese SOHC motor, while the Jupiter is an electrifying, energetic, torquey Indian motor. The Jupiter produces 8 PS at 7500 RPM and 8 Nm at 5500 RPM with an improved gearbox and combustion chamber over the Wego. The Alpha produces 7.1 PS at 7500 RPM and 8.1 Nm at 5500 RPM and now has roller type rocker arms in the cylinder head. 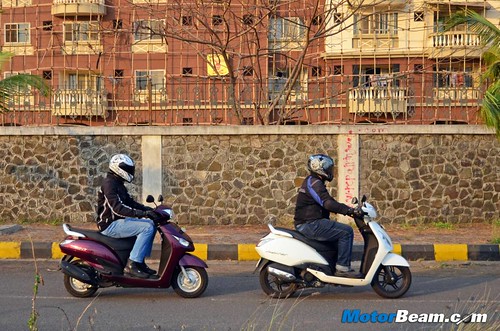 Off the line, the Alpha is slightly quicker but the Jupiter stays on par until the mid-range where the TVS overtakes the under-powered Yamaha. The Alpha pulls strongly from 30 km/hr to 60 km/hr while the Jupiter pulls strongly from 45 km/hr to 85 km/hr. Clearly we can notice here that the Alpha has stronger city drivability. The Jupiter does not have the urgency of the Alpha which feels like a detuned FZ engine with an automatic gearbox (stupendous response in low and mid-end). Both the Jupiter and the Alpha have a top speed of 87 km/hr. The Alpha lacks top end power but does not feel stressed there, while the Jupiter feels slightly more stressed near the top speed mark. This round goes to the Alpha. 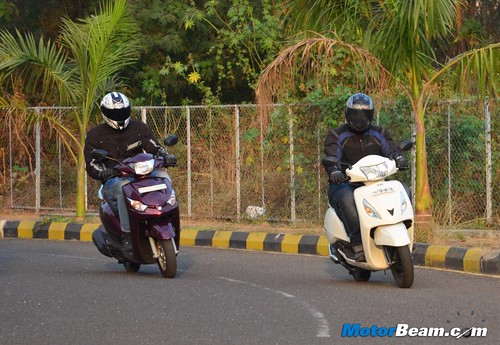 Both these scooters are dynamically rich, Alpha is more sportier of the two

Riding Dynamics – Telescopic forks, single sided rear suspension with engine being a stress member of the chassis are the common facts in both these scooters. Dynamically both these scooters are excellent and choosing between them is like choosing between your own laptop and desktop. The Alpha (being laptop) has a sporty suspension setup and feels racy. However, the Jupiter (being desktop) has a well-tuned suspension and is dynamically rich too. Both turn in very quickly and have plenty of grip. The Jupiter’s tyres fail to inspire confidence while riding in an enthusiastic manner when the road gets twisty. 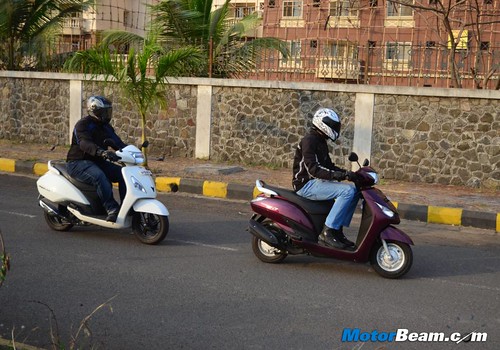 Yamaha has given an excellent set of tyres to the Alpha, just like they did with the Ray. However, the 12-inch wheels on the Jupiter make it handle bumps and potholes much better than the Alpha (which has 10-inch wheels) which is sufficiently more stiffly sprung than the Jupiter . The desktop *ahem* Jupiter is a step ahead when it comes to offering ride comfort. Coming to the brakes, we always loved the Ray’s brakes and the Alpha’s brakes are no different, which provide confidence-inspiring feel and excellent stopping power. The Jupiter’s brakes are good too and do the job very well but due to hard profile tyres they screech every time you brake hard. The Alpha wins this round. 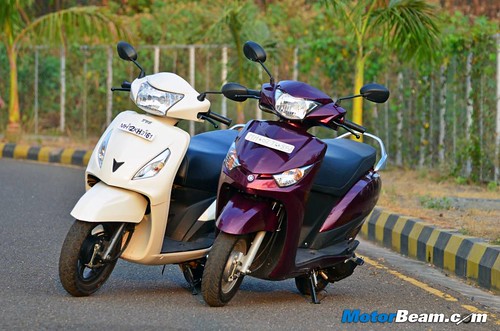 Verdict – The reason why the Honda Activa was not included in this test is because it is already expensive by Rs. 1500/- and is bare basic in terms of features over the Yamaha Alpha (except the shutter lock). The Alpha is the brother of its sister, the Ray, which is an excellent scooter and did everything brilliantly. However, the Alpha has its minus points which is the slightly oddball styling and a slightly higher price tag. This won’t be an issue when it comes to buying. The size of the scooter, which is substantially larger when compared to the competition and as big as a segment above, like the Suzuki Swish, will undoubtedly attract male customers to the showroom. The Jupiter outshines with tons of features. Right from a shutter lock to LED tail lights, there is a host of things in between which justifies the price tag. Although there is no justification required in this test as the Alpha is more expensive than the Jupiter by Rs. 1500/-, even though the TVS is having a plethora of features and is slightly more comfortable than the Yamaha. The TVS Jupiter was MotorBeam’s Scooter of the Year and for very solid reasons, it now continues to win every other trophy including this one too by a healthy margin.

The TVS Jupiter is a sheer value for money proposition and has an upper hand in sales and service network too. Being dynamically rich and practical at the same time is a bonus which consumers will enjoy daily.