The Yamaha MT-15 is a sportier, meaner & street-going version of the R15

Yamaha has been teasing us with the MT-15 since quite some time. About 3 months back, Yamaha invited us for the launch of a naked motorcycle but it turned out to be the Yamaha FZ 3.0. Last week, Yamaha got us to the Buddh International Circuit to test a “New Bike”. Things couldn’t get clearer as we all knew it was time for the MT-15. But then, does it make sense to ride a 155cc street fighter on a race track? Well, it was fun and good enough to get a first-hand experience.

Motor Quest: MT stands for “Master of Torque”. The MT-01 was the first MT motorcycle which came out in 2005. In 2014, Yamaha updated the MT series and introduced a complete line-up in the following year. Last year, Yamaha introduced the MT-15 with some cosmetic changes for the elder MT motorcycles worldwide. The India launch happened on 15th March 2019 and the bike is known as MT-15 here. 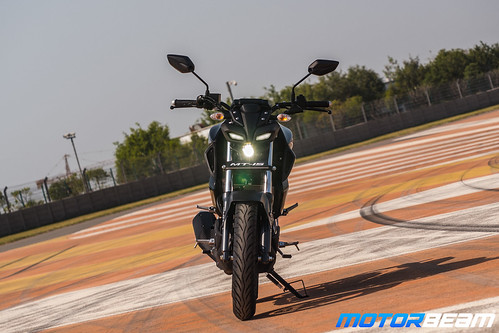 Styling – The Yamaha MT-15 inspires lots of bits from its elder brother, the MT-09, while has a lot of traits coming in from the R15. The complete lower half of the bike has components similar to the R15, including the tyres and suspension. While the top half is quite different as it gets a single piece seat, a bulky and beefy sculpted tank, single-piece handlebar and very unique headlight setup. The headlight has a single piece LED projector with hi-low function, while it also has a pair of DRLs which give the front a mean transformer look. 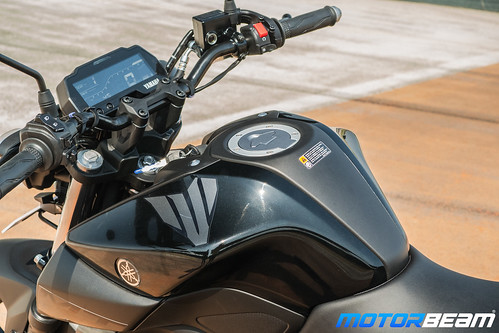 The tank is well-sculpted but capacity is less

Overall, the bike looks tiny as the seat ends before the rear tyre does while it has an extended fender too. It also gets LED taillights which look unique but the bike misses out on LED indicators. The MT-15 is available in two colour options – Dark Matt Blue and Metallic Black. The Matt Blue colour has some yellow highlights all-over while the Metallic Black has a stealth look. The MT-15 also gets an engine cowl as standard, although it is made of plastic it still looks purposeful. Overall, the Yamaha MT-15 has that attention seeking look to it. 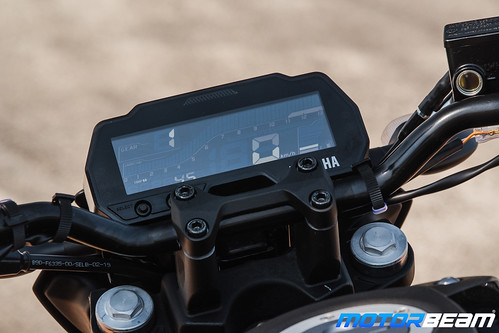 Instrument Cluster and Switchgear – The fully digital instrument cluster is the same as we have seen on the Yamaha R15 V3. However, the unit here has a negative LCD which makes it difficult to read in bright sunlight and looks very deceptive. It provides the same information as we have seen on the R15 and gets the same white shift light too. The switchgear is slightly different as the one on the right looks very uncanny and seems to be taken from the FZ siblings. The one on the left is also different and does not come from the R15. The fit and finish levels are good while the switches have a piano finish.

Renault wants to go all guns blazing in the Indian market by creating new segments. Renault launched the Triber in 2019 and this 7-seater   END_OF_DOCUMENT_TOKEN_TO_BE_REPLACED