Rarely does it happen that a new product comes and lacks any sort of competition for a long time. This has been the case with the Yamaha R15, whose success has made the company take it easy with updates. The R15 has had an easy run, so much that when the Version 2.0 came out, it still didn’t have any direct competition whatsoever. A sporty 150cc motorcycle seemed like a ridiculous concept back then but Yamaha proved all the critics wrong and the R15 was a huge success. If anyone had to challenge the YZF makers, it had to be Honda and they came all out with the CBR150R. The baby CBR didn’t ruffle a feather and Yamaha’s home run continues. Now, in what is the first real competition to dethrone the R15, Bajaj Auto has brought out the Pulsar RS 200 and it’s armed with more performance. Thus, we put the Race Sport Pulsar against the Japanese twins of this segment.

Motor Quest: Yamaha launched the R15 in India in 2008, bringing out the second generation model in September 2011. The Honda CBR150R was launched in India in March 2012 while Bajaj Auto launched the Pulsar RS 200 in March 2015. The Pulsar is a very different bike than the Japanese machines but competes with them due to its pricing. 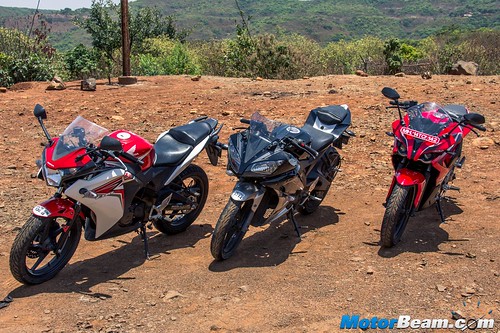 Styling – These three bikes have little in common as far as the design goes. While all these machines come with a full fairing, it’s safe to say that’s where the similarities end. The Honda CBR150R’s design is quite laid back, the R15 is on the other end by being too sporty while the Pulsar plays the middle ground. However, the RS 200’s design can’t be called sedate by any means of the imagination, it is quite over the top and simply lacks the subtleness of the R15 or CBR150R. The Pulsar appears too edgy with a multitude of cuts and creases on its fairing, its rear tail light being an eye sore in comparison to the neat unit on the R15 and the shockingly non-LED equipped one on the Honda. 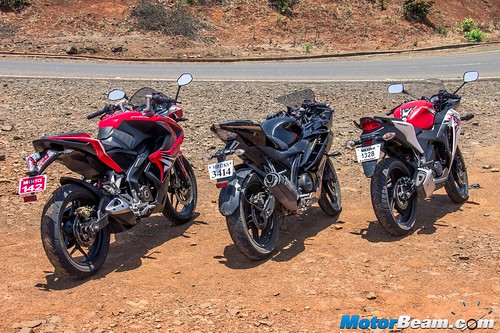 Till date, the Yamaha R15 continues to be the most appealing India made bike

Neither of these bikes come with a clean paint scheme, all get dual-tone paint jobs, the Honda’s being more striking but the CBR150R’s VFR design looks out of place and from the side the bike looks a bit weird because of the shorter wheelbase (the wheelbase is much less compared to the decrease in length against the CBR250R). Meanwhile the Pulsar’s design is a bit ruined by the unnecessary graphics but it’s the only bike here with projector headlights, LED indicators and LED daytime lookalike parking lights. Without doubt, Yamaha’s paint division is the most hardworking of the three as the colour options on the R15 are by far the best, they also keep getting refreshed every year. The Yamaha is also the best looking bike here, time doesn’t seem to fade its R6 inspired magic and although it might not draw curious eyes like the fresher Pulsar, it sure is one of the best designed bikes we have in our country today.

All bikes come with easy to read clusters but the Pulsar RS 200 is the most loaded; the R15 has the best quality

Instrument Cluster and Switchgear – All these three bikes have semi-digital insutment clusters with the tachometer being analogue. The layout is interesting because on the R15, the tacho is on the right while on the Pulsar, it’s on the left and the CBR150R has the rev counter on the top. All bikes have easy to read consoles but the R15 misses out on a clock while the Honda, in spite of being the most expensive bike of the trio, comes with the worst switchgear you can imagine. Not only is an engine kill switch lacking but the buttons feel sub-par. The Pulsar’s console is the most loaded, it gets a low battery indicator, service due reminder, side stand warning and shift light while neither get a gear position indicator (offered on cheaper bikes like the Suzuki Gixxer). The RS 200’s switches are backlit and switchgear quality is better than the Honda (overall quality of the CBR is better than the RS 200 though) but the R15 shines above the Pulsar and CBR150R easily in terms of fit, finish and quality. 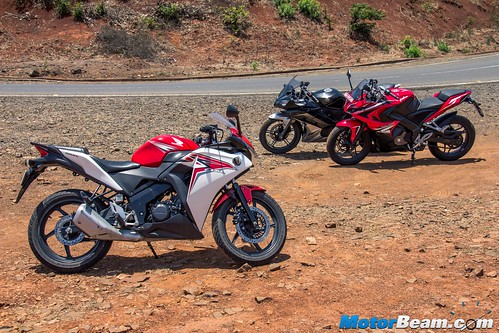 Ergonomics – The Pulsar RS 200 and CBR150R are very similar in terms or ergonomics as both get a rather upright riding position with a slightly sporty lean, the Honda being slightly more aggressive than the Bajaj. In comparison, the Yamaha R15 is outright sporty with a dedicated riding position which takes a toll on the rider after some distance because the wrists take the brunt. All three bikes get a split seat set-up and while the R15’s pillion seat is just of no use, the Honda offers the best pillion comfort, it also has the best seats ensuring comfort during long distance rides. The Pulsar is more suited to tall riders while the Yamaha pleases short riders and the CBR150R is somewhere in between. 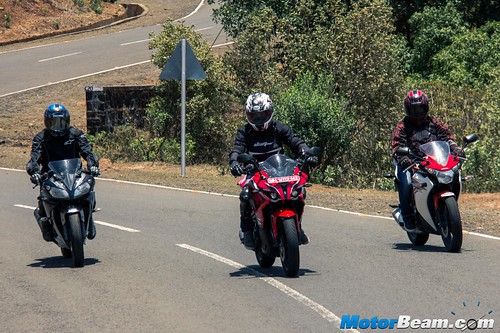 The Japanese bikes excel in terms of NVH, they have a better gearbox too

Performance – This is where things get interesting because although all three bikes are powered by 4-valve, liquid-cooled, single-cylinder, fuel-injected engines, the Pulsar RS 200 has a massive displacement advantage. Not only is the Race Sport Pulsar powered by a 199.5cc engine, it is also blessed with three spark plugs, which is thrice as many as either the Honda or Yamaha. Naturally with more cubic capacity, the Pulsar RS 200 produces much more power too, generating 24.5 PS and 18.6 Nm. Meanwhile the 149.8cc Yamaha is the least powerful here with 17 PS of power and 15 Nm of torque and the 149.4cc Honda belts out 18.54 PS but has the least amount of torque on offer at 12.66 Nm. 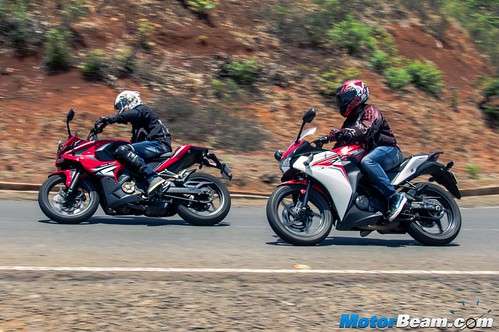 The Pulsar’s power advantage is immediately apparent, it’s much faster

As surprising as it may sound, the R15 produces its peak power the earliest, at 8500 RPM while the Pulsar RS 200 does it at 9750 RPM and the CBR150R peaks its horses at a rather high 10,500 RPM. But the low torque output of the Honda and the fact that power is produced higher in the rev range, makes it the worst bike of the three when it comes to performance in stop-go traffic, one does have to rev it harder to get going. Both the SOHC engine equipped R15 and Pulsar RS 200 have good low-end performance while the top-end is better in the R15 as there are lesser vibrations than the Pulsar, both the Yamaha and Honda having superior refinement than the Bajaj motorcycle. The YZF machine redlines at 10,500 RPM, the Pulsar goes further ahead to 11,000 RPM while the Honda’s DOHC mill reaches a stratospheric 11,700 RPM, making it the most enjoyable bike to redline. The gearbox on the R15 is the best, followed by the CBR150R while the Pulsar also has a good transmission but doesn’t have the feedback offered by the Japanese. All bikes sound nice but we like the exhaust note of the Pulsar the most. 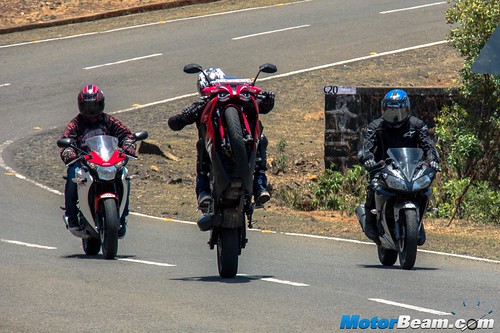 Everything aside, when you give these bikes the full throttle treatment, the Pulsar RS 200 leaves both the Japanese bikes in the dust, doing the 0-100 km/hr run in 10.12 seconds while the CBR150R is more than a second quicker than the Yamaha to the ton (the R15 is faster in the 0-60 km/hr sprint thanks to better low-end performance), taking 11.69 seconds against the R15’s 12.78 seconds (as per our VBOX tests). The Pulsar feels in a different league as far as performance goes, it is so much quicker in gaining speed and is just a hoot to ride thanks to the way it gathers pace. Even in terms of top speed, the Pulsar shows who is boss, posting a real top whack of 141 km/hr while the R15 manages 130 km/hr and the CBR150R does 134 km/hr. The Pulsar RS 200 with its heavier weight and bigger engine posts the worst mileage of the three at 35 km/l while the Honda manages 37 km/l and the Yamaha is the most frugal by returning 38 km/l (it also has distance to empty feature once you hit reserve). The R15 comes with a smaller tank of 12-litres while the other two bikes get a 13-litre tank. 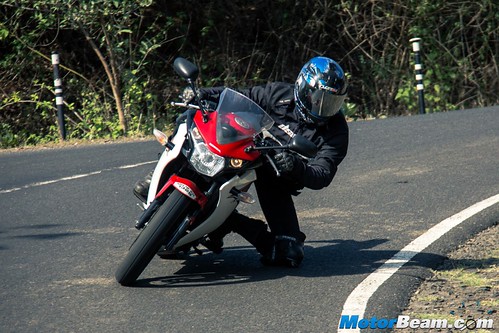 Riding Dynamics – All three bikes use a rear monoshock and the same sized rear tyre (the front tyre size is the same on the Honda and Bajaj but the Yamaha has 10 mm narrower rubber), all also use a perimeter frame. The Pulsar RS 200 is the heaviest bike of the trio, weighs 165 kgs while the Yamaha and Honda are a whooping 29 kgs and 27 kgs lighter respectively. In spite of the added weight on the Pulsar, it’s a fun bike to ride and corners very well, giving good feedback but all that is overshadowed by the R15 which is just the handling king in this segment. 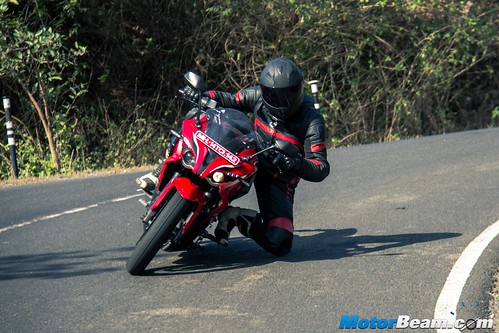 Not only is the Yamaha R15 more agile around corners with its quicker steering, it also inspires more confidence to push hard, the bike feeling natural to chuck into corners thanks to the dedicated riding position. While the Pulsar RS 200 is the only bike which scrapes its pegs, the other two don’t have this issue when you get near the limit. The Honda CBR150R has the shortest wheelbase here and is a good handler too but while the other two bikes comes with good compound MRF tyres, the baby CBR makes do with hard compound rubber which simply doesn’t offer the level of grip it needs to. With a change of rubber, the CBR150R can be a revelation around the twisties, more so because it has the most fun engine of the pack. 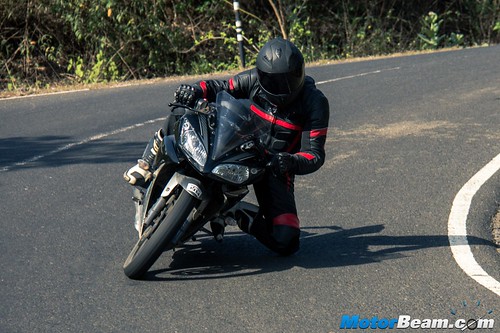 All these bikes have a good ride quality but the R15 excels among the three, being the most compliment in spite of having the best dynamics, that is Yamaha for you, it also feels the most stable of the trio at high speeds (the R15 comes with an aluminium swing-arm while the other two bikes make do with a steel swimg-arm). All bikes get front and rear disc brakes but the R15 is yet again offering the best brakes while the Pulsar RS 200 gets the option of a front-channel ABS (not as effective) for an additional Rs. 15,000/-. Both the Pulsar RS 200 and Honda CBR150R are good in ride quality, stability and braking but the Yamaha R15 is just better. 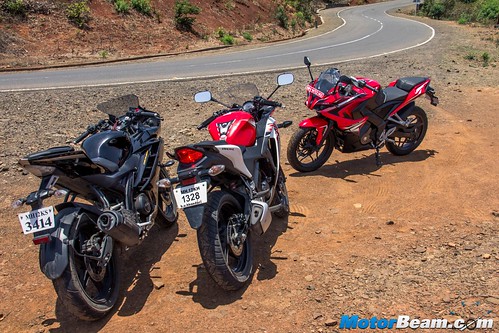 Verdict – The Yamaha R15 is without doubt the most superior bike here in terms of engineering precision. Not only is it the best handling bike here, it also boasts of the best ride quality, most stability and better anchors than the rest. But the R15 is too dedicated a motorcycle and in front of the Pulsar RS 200, it lacks power and equipment. Same is the case with the CBR150R, it just doesn’t look exciting enough and Honda is charging an unjustifiable premium for it. There is no doubt, the Pulsar RS 200 offers the most bang for the buck and being the most practical machine here, makes it our winner in this shootout. Now only if Honda starts to care about the CBR150R, a bike with a lot of potential, then only can this extremely fun to bike ride bike come in contention because we would definitely like to “taste first blood”.

All three bikes are excellent in their own way and are a lot of fun to ride but the Pulsar RS 200 offers the best performance for the least cost while also being the best equipped, making it our choice in this shootout.