The year 2015 has already seen so much happening in the motorcycle world, new launches, scoops and so much more. Most importantly, Yamaha has finally launched an all new motorcycle so its reason to rejoice, although not for enthusiasts just yet. After having turned its attention completely to scooters, the Japanese automaker has finally launched a bike and it’s none other than a 125cc. While most would be zapped at the Saluto as no one saw it coming, more so considering everyone was waiting for a bike with double the capacity, it’s this 125cc commuter which will get Yamaha the volumes it so craves for. The 125cc commuter motorcycle runs with Blue Core technology and happens to be the most fuel efficient Yamaha in the Indian market currently. We got our hands on the Saluto to see if it has the Yamaha DNA. 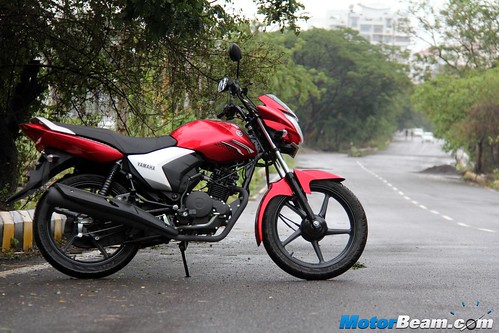 Arrow like design goes all over the body, from the headlamp with the fuel tank till the tail

Styling – Yamaha keeps attention to detail as the main moto, all the scooters and bikes by the company have those clues very well designed. For the Yamaha Saluto, we start with the headlamp which has an aerodynamic design and looks elegant and sharp, the headlamp has an overhead pilot lamp which then continues with a black visor. The tank gets an arrow design with a Yamaha logo and a 125 sticker. The seat is a regular one with a Yamaha text on the rearmost end. The bike gets a regular single-piece grab-rail and with the rear body it gets a wide tail lamp. The Saluto text is visible on the rear panels. 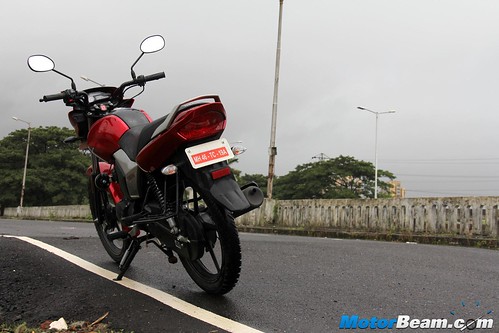 Coming back to the front, under the rider’s seating position there is a pair of plastic panels which cover the air filter and the battery, even these come along in an arrow design with a silver colour blend and Yamaha text on them. The front mudguard is a very interesting piece, as it is a very long mudguard covering almost the whole tyre and also carries an arrow like design towards the front forks. The rear mudguard is really long too and comes slightly towards the outside. While looking at the motorcycle, as we encountered, there was a different kind of an exhaust tip on the bike, something weird and new. 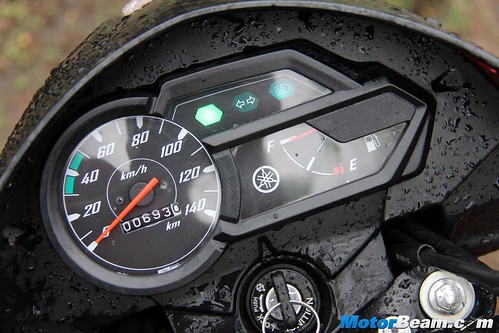 Instrument Cluster and Switchgear – The Yamaha Saluto is a commuter motorcycle and to save the cost on the motorcycle, the bike doesn’t get any digital meter or any such stuff. It has a simple analog speedometer with an odometer and no trip meters. The cluster has a Yamaha logo in the centre which has a fuel gauge next to it. The outdated switchgear even loses out on an engine kill switch while there’s a starter button on the right and all the rest are moved to the left side of the handlebar. The combined switchgear gets multiple colours too, red for buttons, black for background and grey colour for the headlamp switch. 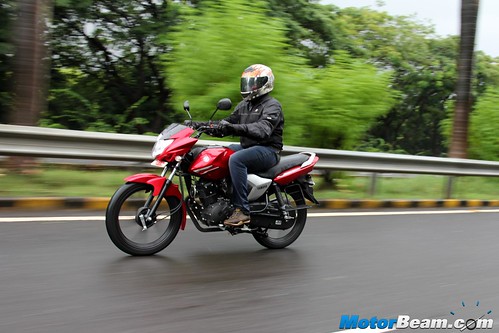 Not sporty nor extremely upright, the Yamaha Saluto has perfect commuter ergos

Ergonomics – A regular commuter motorcycle has really comfortable ergos and the Yamaha Saluto does tick some of the boxes here. Upright handle bars, comfortable seat and properly positioned footpegs. Where it loses out on is the gear shifter and brake pedal. Almost all the new bikes get only front rubberised pedal to shift gears. This bike gets front-rear set and both of metal. The brake pedal is also metal and doesn’t feel proper while riding. For the pillion, the seat and foot pegs are very much comfortable. The saree guard and the rear grab rail which look a bit outdated provide decent ergos. The big one piece exhaust protector works well too, protecting both the rider and pillion’s legs from the exhaust heat. 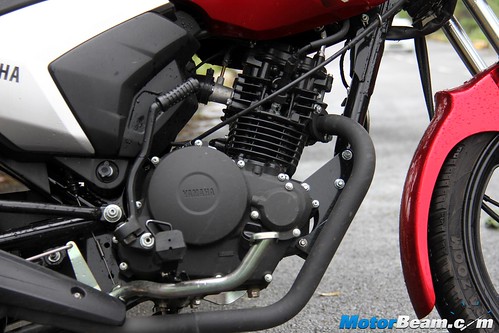 Performance – Yamaha engines have been sweet sound and performing well since really long and the Japanese firm hasn’t backed off yet. The 125cc mill in the Yamaha Saluto puts out 8.3 PS of power at 7000 RPM while it shoots 10.1 Nm of torque at an early 4500 RPM. The torque comes early at the initials while the power comes in quite late. This makes the bike accelerate very quickly and yet it is able to maintain good speeds (for a 125cc bike). The first two gears can cover the 60 km/hr mark while with the rest two, it takes time to cross the 90 km/hr mark. According to our VBOX tests, the top speed is 88 km/hr. 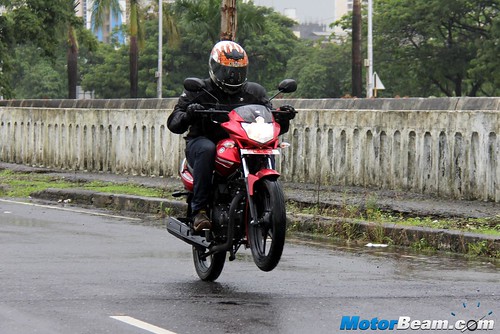 Light weight and early torque delivery. Lifting a wheel is an easy task

Long initial gears and with Yamaha’s Blue Core technology results in a recipe for an efficient engine and the Saluto is the most efficient motorcycle available from the R15 maker currently. The NVH levels are very well maintained on the Saluto except for idling and near redline where the bike does vibrate to some extent, more so on the pegs when you get into the top-end. The gearbox offers smooth shifts and the clutch is light too. The engine sounds refined although this bike isn’t aimed for those who want a quick 125cc bike (the SS125 is there for that), the Saluto taking a rather lethargic 9.34 seconds to do the 0-60 km/hr run. 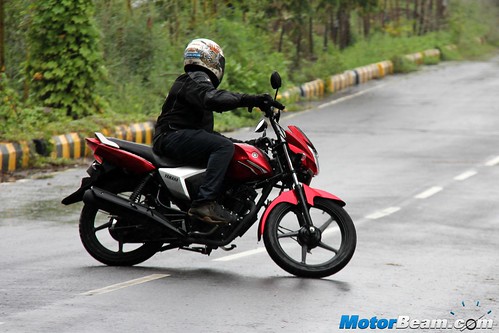 Taking a sharp turn, no worries, Yamaha’s handling DNA is very much intact

Riding Dynamics – As one would expect, the Saluto is fun to ride thanks largely to its light weight and good low-end torque. The bike has thin tyres for economy and the Ceat Secura rubber lacks grip, not supporting what is otherwise quite a able chassis and suspension package. The motorcycle pulls in a straight line very well and also takes corners with enthusiasm. The Yamaha Saluto doesn’t get a front disc brake, not even as an option. With just drum brakes, the braking performance is just about average. The front lose some initial bite but the rear does make sure the bike stops although not quickly. The suspension of the motorcycle does a good job of giving the Saluto a plush ride. 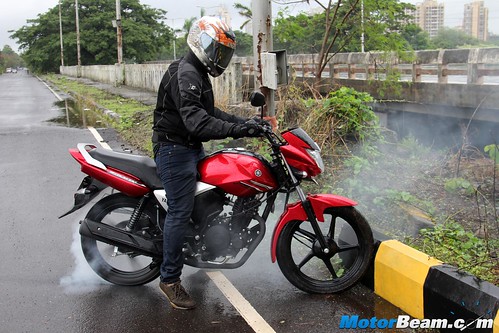 Yamaha’s engine revs the heart! and this bike burns rubber without much effort

Verdict – Yamaha’s comeback in the commuter segment is possibly a good move. With the Saluto, Yamaha dealerships can expect people coming in more often now. Not just enthusiasts but regular people preferring a regular motorcycle. The Blue Core technology which focuses on high combustion efficiency and reduction in power loss, must provide the Saluto with the best it can achieve, good performance and great economy. Having said that, the Saluto doesn’t stand out alone. It’s a commuter segment bike and the competition is humungous. At Rs. 65,500/- the Saluto feels a bit costly but Yamaha engines are among the best in the world and with the good build quality it offers, it’s probably worth the money.

The Yamaha Saluto being a new motorcycle doesn’t have much of new hardware. But addition of any such would increase the cost. The motorcycle is a good performer and ticks most of the right boxes although it does miss out but on just a few. 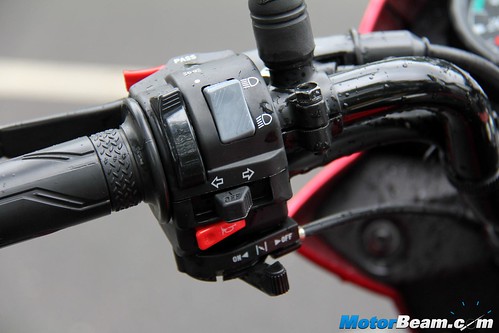 * Ride quality, the bike is pliant over most roads
* Engine performance, abundant torque early on for easy riding in the city 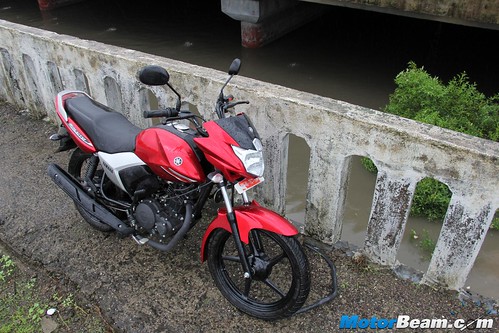 A good effort by Yamaha, the Saluto is really a good machine for commuters

“The Saluto is a good bike for those who want a no nonsense Japanese commuter but it’s not a motorcycle which stands out. If Yamaha wants to increase volumes in the 125cc segment, it needs to get something revolutionary to the market, like they did with the FZ in 2008. The Saluto is easy to ride, has peppy performance and is very efficient, but it isn’t much different from its rivals.” – Faisal Khan, Editor, MotorBeam.