The Audi Q5 has been the leader in its segment and the updated model ensures it stays that way.

When Audi first launched the Q5 in 2009, people who could afford one, closed their eyes and rushed to buy it. The Q5 had its work cut out, as the Q7 had already built up a cult fan following from the SUV loving junta. The Audi Q5 immediately emerged as the popular vehicle of choice in the mid-size SUV segment and was unchallenged for a long time. The Audi Q5 has been doing decent numbers and now the German luxury car maker has given it a minor facelift, to tackle increasing competition from its German peers. This facelift addresses few parameters of the vehicle, which makes it an even better and more attractive package. 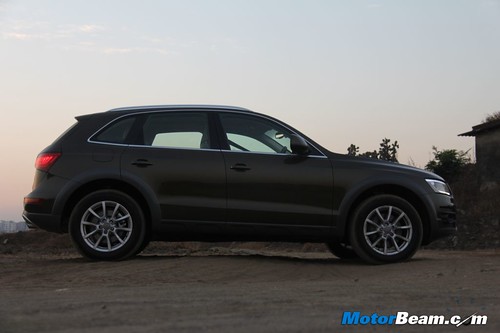 Exteriors – The Audi Q5 has always been a sporty looking SUV and the minor tweaks enhance the vehicle’s striking design further. The front now sports Audi’s new hexagonal grille, which has vertical chrome bars and six corners, giving the SUV a distinctive appeal when viewed head on. Other changes to the front include a new bumper with new air inlets and new fog lights which have chrome ring surrounds. However the most striking change to the front of the Audi Q5 are the new xenon plus headlights, which incorporate new LED daytime running lights. Audi is a master in LED technology and the ones on the Q5 are very eye catchy, with a continuous strip running throughout the edge of the headlight to emit a rectangular appearance. 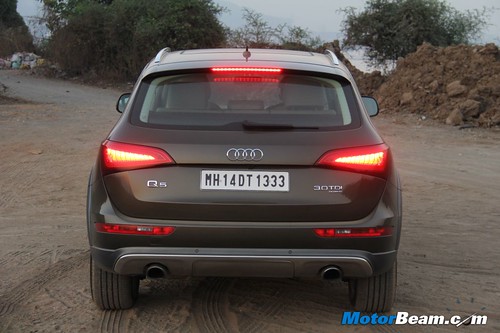 The lower and wider front end compliments the other areas of the car. The side profile reveals the coupe-like arched roof which descends early and carries aluminum roof rails to elect that sporty appeal. New 17-inch 10-spoke alloys look menacing while the silver lining around the windows accentuate the side profile of the Audi Q5. The rear gets new tail lights with new LED strips. There is a new re-designed diffuser and all models (except the 2.0-litre diesel) have twin tail pipes, one on either side. The wrap around rear looks good and the Q5 has a wide stance which gives it impressive presence on the road. 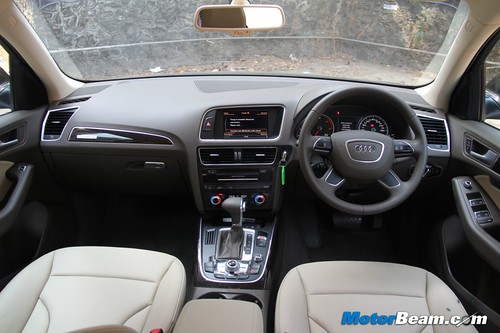 Interiors – Once inside the Audi Q5, you will immediately face a déjà vu moment, because like other Audi cars, the Q5 too has a very similar dashboard, which is not a bad thing at all. Audi designs one of the best interiors in the industry and although most vehicles share parts, the quality is top notch and the cabin exudes the luxury feeling. Changes from the previous model are minor but well executed to ensure that the Q5 stays true to its premium tag. The well laid out dashboard carries stupendous levels of fit and finish and we love the 4-spoke steering wheel, which is a delight to hold. 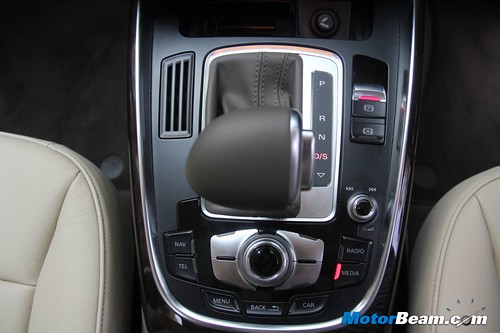 The 6.5-inch Multi Media Interface (MMI) sits right on top of the centre console and is neatly shaped with slender chrome ring. Infact, Audi has given many controls chrome treatment to give a distinctive appearance to the interiors. The centre console is finished in high-gloss black and there are quite a few storage areas inside the vehicle. Audi has also improved the infotainment system on the Q5, which now boasts of a better media centre, including voice control functionality and driver assistance systems (now features drowsiness detection). 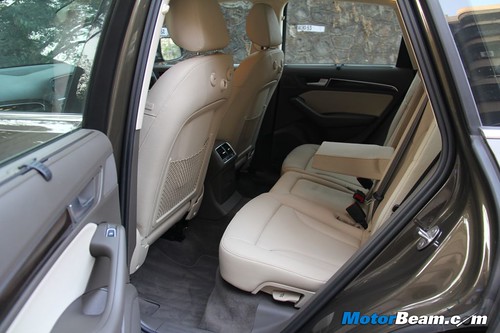 The seats are extremely comfortable and even after several hours behind the wheel, one feels as fresh as a daisy. The rear seats offer decent legroom but the huge transmission tunnel makes the Audi Q5 strictly a 4-seater. Boot space is impressive too and the rear seats can be folded to boost it even further. The attention to detail is impressive on the Audi Q5. If you leave the ignition on and get out of the vehicle, the Q5 shuts down itself. Sunroof is standard on all variants and the top-of-the-line variant gets a large Panaromic roof. 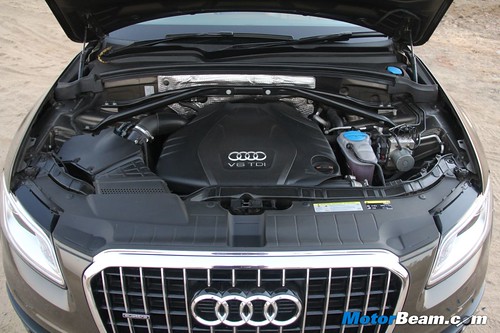 Performance – We have already witnessed the 3.0-litre, V6 TDI diesel engine in the Audi A6 and Audi A7 earlier, but this motor just doesn’t cease to amaze us every single time. In the Q5, Audi has boosted the output by 5 BHP and 78 Nm, which is quite significant considering the added twist on offer. However the addition in power hasn’t come at the cost of economy and Audi claims that the new Q5 is up to 15 percent more efficient than its predecessor. Power delivery is instant and rewarding and NVH levels are very good with very little diesel grunt audible inside the luxurious cabin. 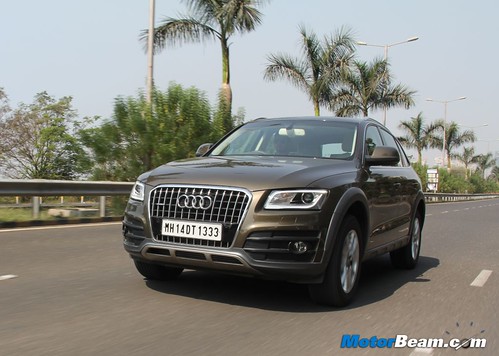 This engine is mated to a 7-speed S tronic transmission which is at the forefront ensuring smooth cog swapping. There are no paddle shifts even on the top-end variant which comes as a disappointment, however one can take control of things by using the tiptronic function on the gear lever. Performance, as you would expect, is nothing short of explosive with every dab on the accelerator pedal resulting in an instantaneous surge ahead with plenty of reserve still left. Power delivery although linear, is still addictive and there is a definite shove in your knickers when you bury your right foot in the floor. 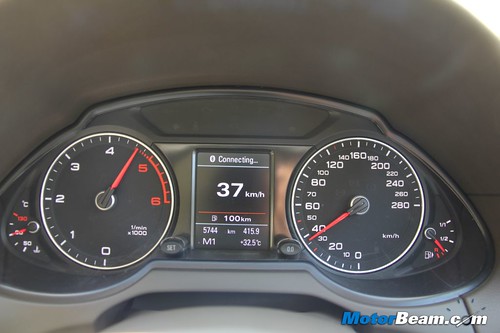 We can go endlessly with praise about the 3.0-litre TDI engine, it’s that darn good. The motor feels at home at all speeds, whether its ambling around the city, sprinting on open roads or simply cruising on the highways. This mill does a splendid job in hauling the 1.8 tonne Q5 with urgency and blurred scenery. The Audi drive select system offers various modes which control the accelerator pedal characteristics, automatic transmission shift points and amount of steering assist as well. How has Audi managed to boost performance and efficiency at the same time? The German car maker has reduced weight with the use of aluminum on the engine hood and tail gate. Whoever said ‘you can’t have your cake and eat it too’ was wrong, very wrong! 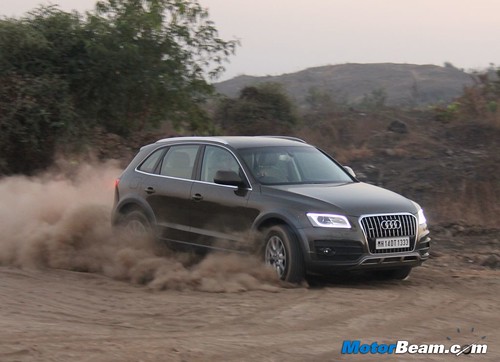 Driving Dynamics – Audi has tuned the Q5’s underpinnings to offer more balanced dynamics. The new Q5 rides extremely well, taking bad roads in its stride with improved confidence. The vehicle glides over bumps with authority and never gets disturbed on even the worst of tarmac. The improved ride is reassuring considering the Q5 will also be subjected to off-road conditions. The new electromechanical steering system is light and responsive although it doesn’t convey much and is not thoroughly involving. The improvements to the ride quality come at the cost of handling, which is still very good considering the bulk of the vehicle. 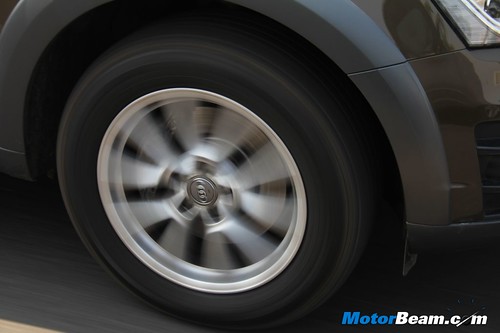 The rear biased power delivery from the Quattro system ensures good levels of grip at most times. High speed stability is excellent too and the Audi Q5 remains glued to the road without giving a hint of the speeds to the occupants. There are four adjustable settings for the dampers – Comfort, Auto, Dynamic and Individual. In Dynamic mode, the Audi Q5 is quite agile and offers good feedback from the steering wheel. Body roll is well contained and the Q5 has decent off-road abilities too, which is further aided by Hill Descent control. Braking performance is good and the speed shedding ability from this beast is thoroughly impressive. 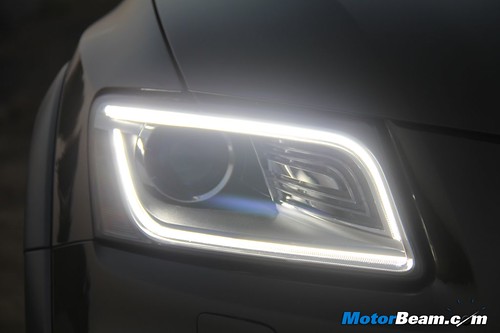 Verdict – The Audi Q5 came, saw and conquered the mid-size SUV segment since the very day it was launched in India. Now the Ingolstadt automaker has taken the game even further with the launch of the facelifted Q5. Although the changes are not really a world apart, they are significant in making the Q5 an even better SUV than it already is. The supremely engineered V6 diesel engine, sophisticated cabin and mature dynamics are proof to why the Audi Q5 is the undisputed leader in its segment. With the improvements, Audi has ensured the Q5 continues to stay on top, yet again.

The new Audi Q5 is a prime example of the best, getting even better. The minor changes in several directions ensure that the Q5 is even more desirable than before. 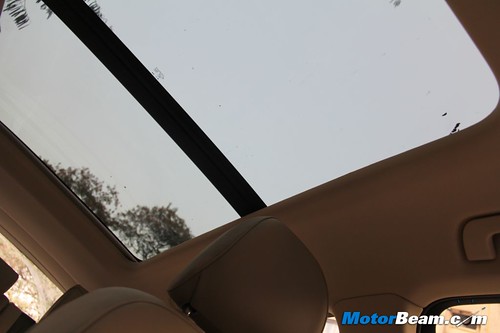 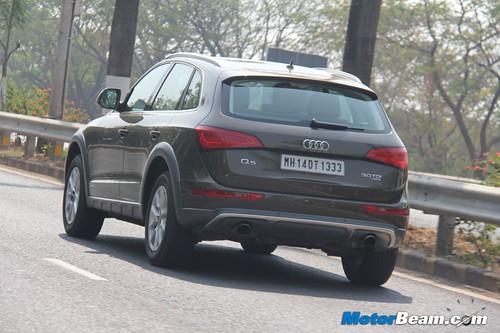